“We gonna start another war!” yells the older French Canadian guy. We’re burning some palm fronds that I gathered up earlier from around the campground. The fat bases of the fronds make pretty decent firewood.

“Another war!” he yells at the woman from British Columbia. They’ve been playing the French and English Canadian thing back and forth all night- or mostly he’s been yelling at her all night. “A war IN MY BED!” Everybody laughs.

“The only way I’m going anywhere near your bed is if you’re out here sleeping in the gravel,” she says.

I’m catching some flack from an Italian hitchhiker about Donald Trump. I try to explain that I don’t have anything to do with the guy- I haven’t even been in the country. He’s not convinced, I’m guilty by association.

“But you elected George Bush twice,” he says.

I open my mouth to try to explain that I didn’t elect anybody back then, I was in middle school, but I’m cut off by the French Canadian yelling something in beer-slurred French accented Spanish.

“LA VACA!” he yells (the cow), then puts his hand to his mouth to make a moose bugling sound. “LA VACA!”

He makes horns on his head with his index fingers, and charges around the fire bugling.

It’s late in the afternoon when we leave Loreto for the second time. We waited for the sun to drop a little lower, from mid-morning to mid-afternoon it makes the world a fiery fiery furnace. Long paved climb to get back into the mountains. 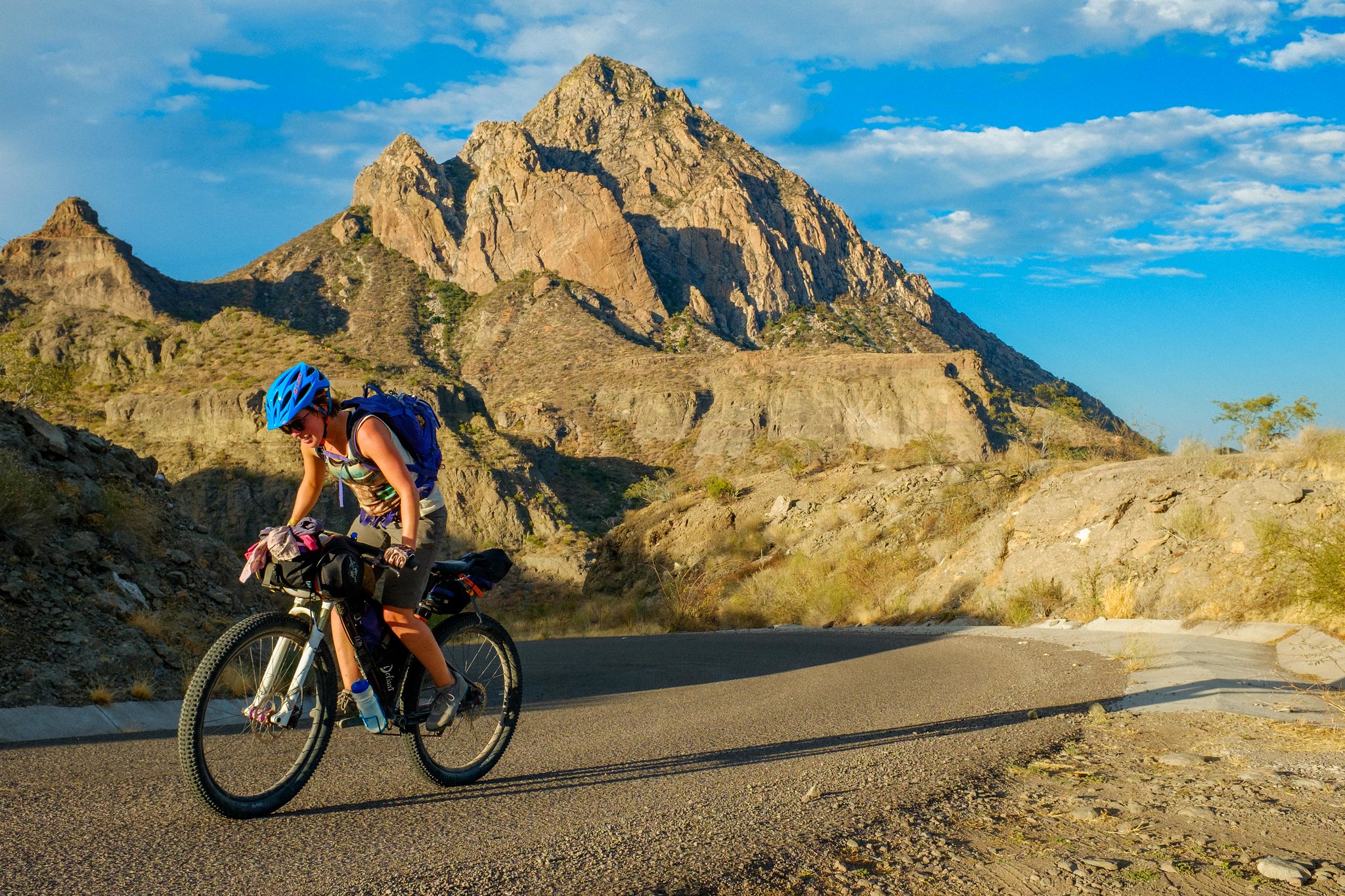 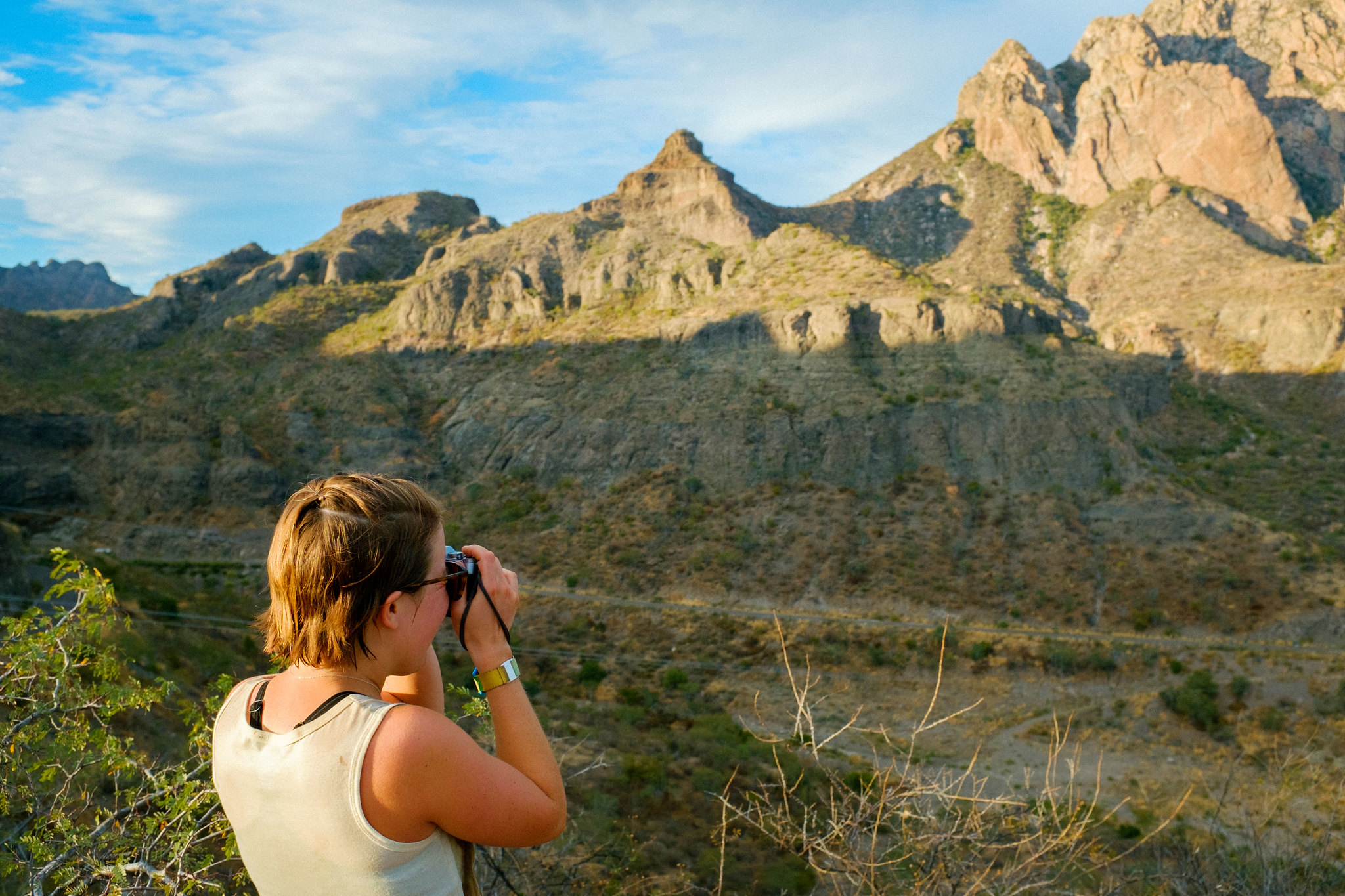 We stop at the top to camp, looking out at the Sea of Cortez. And see the crew from the Palmas Altas one more time, with Monsieur Vaca himself at the helm: 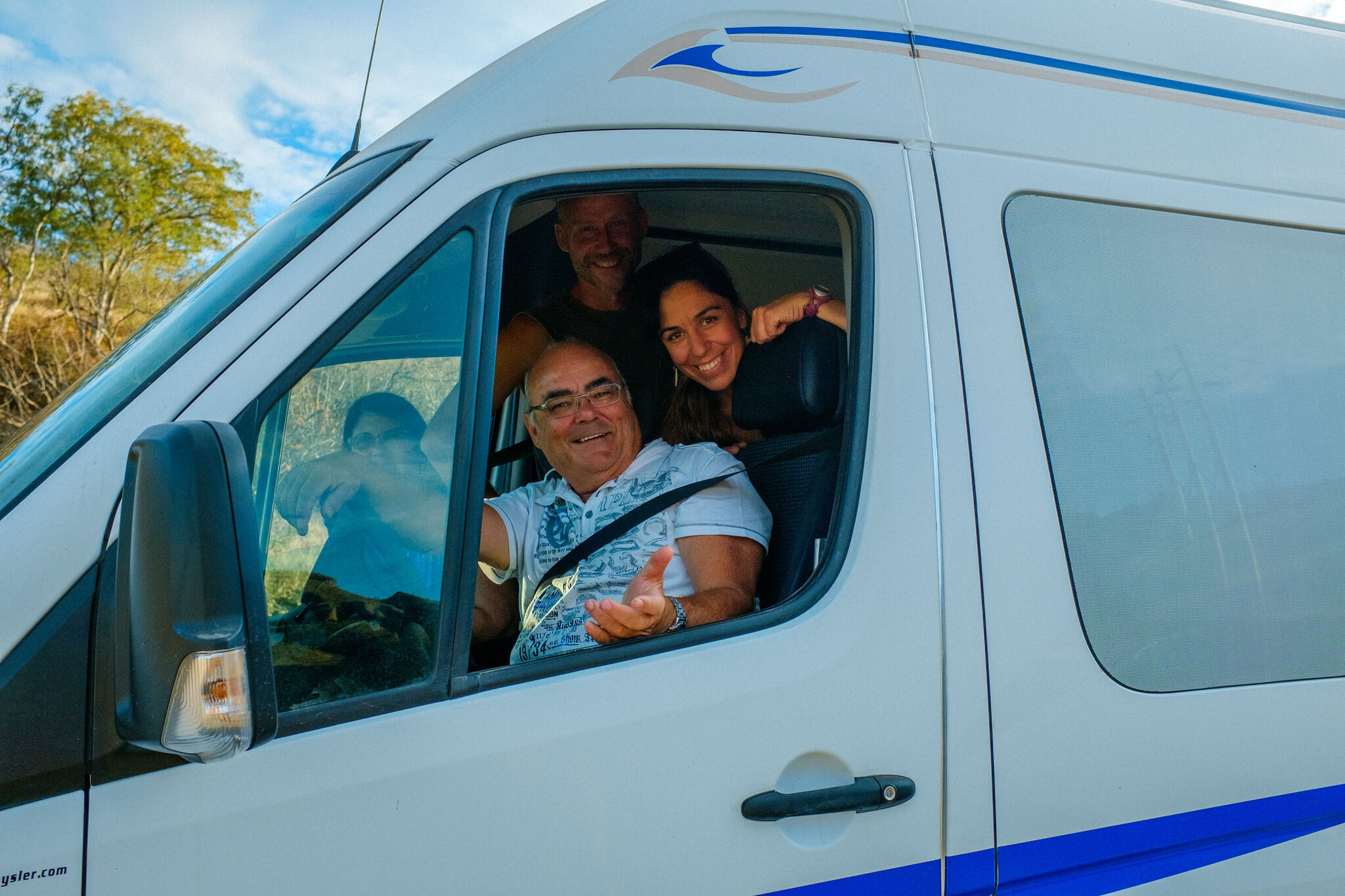 The next day we wake up late, and pedal the mellow road into the old Jesuit Mission in San Javier. Big stone blocks, high vaulted ceilings. Looks like it was hard to build. I’m not much of an architectural critic, so that’s about all I know about that. 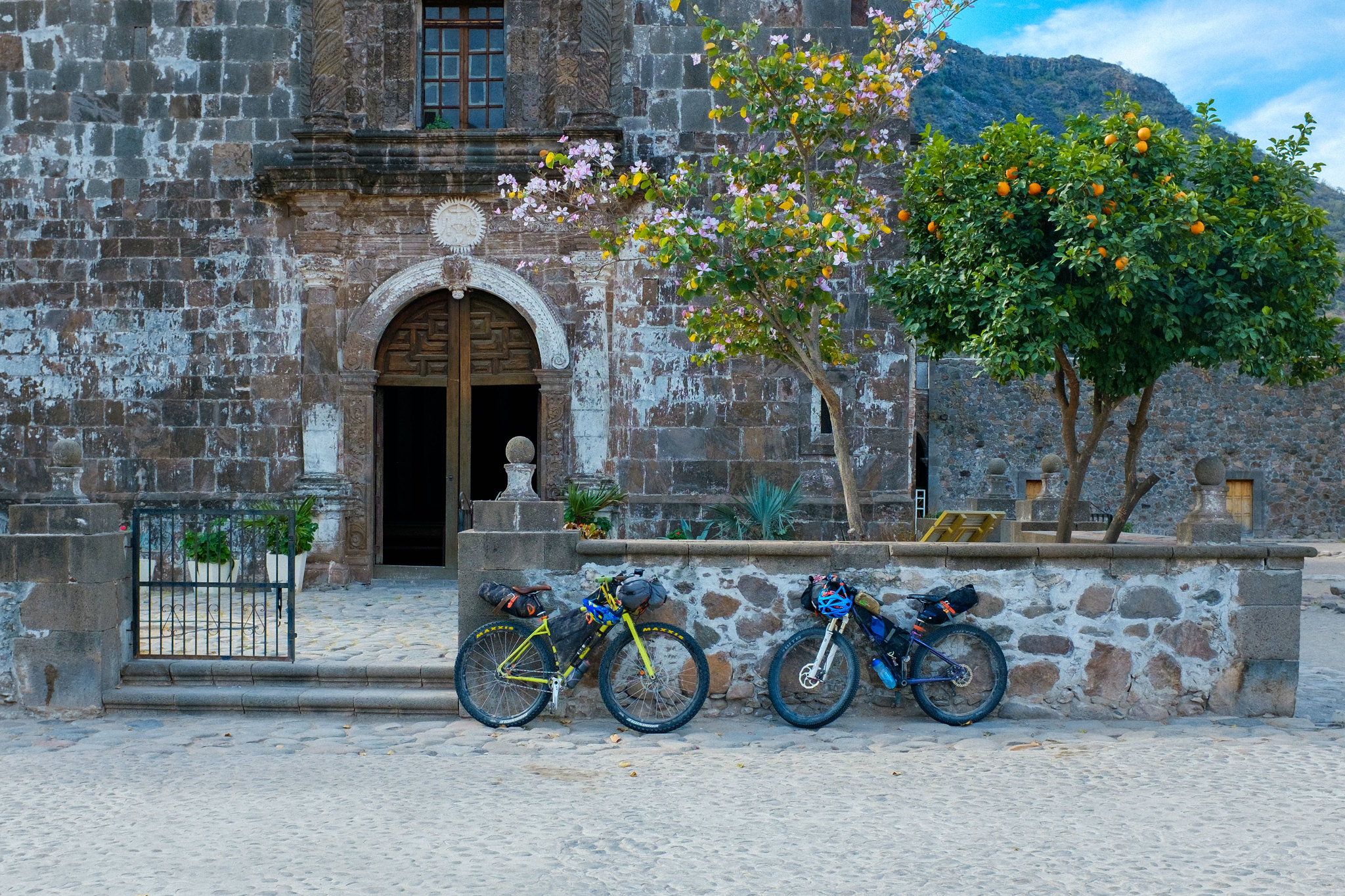 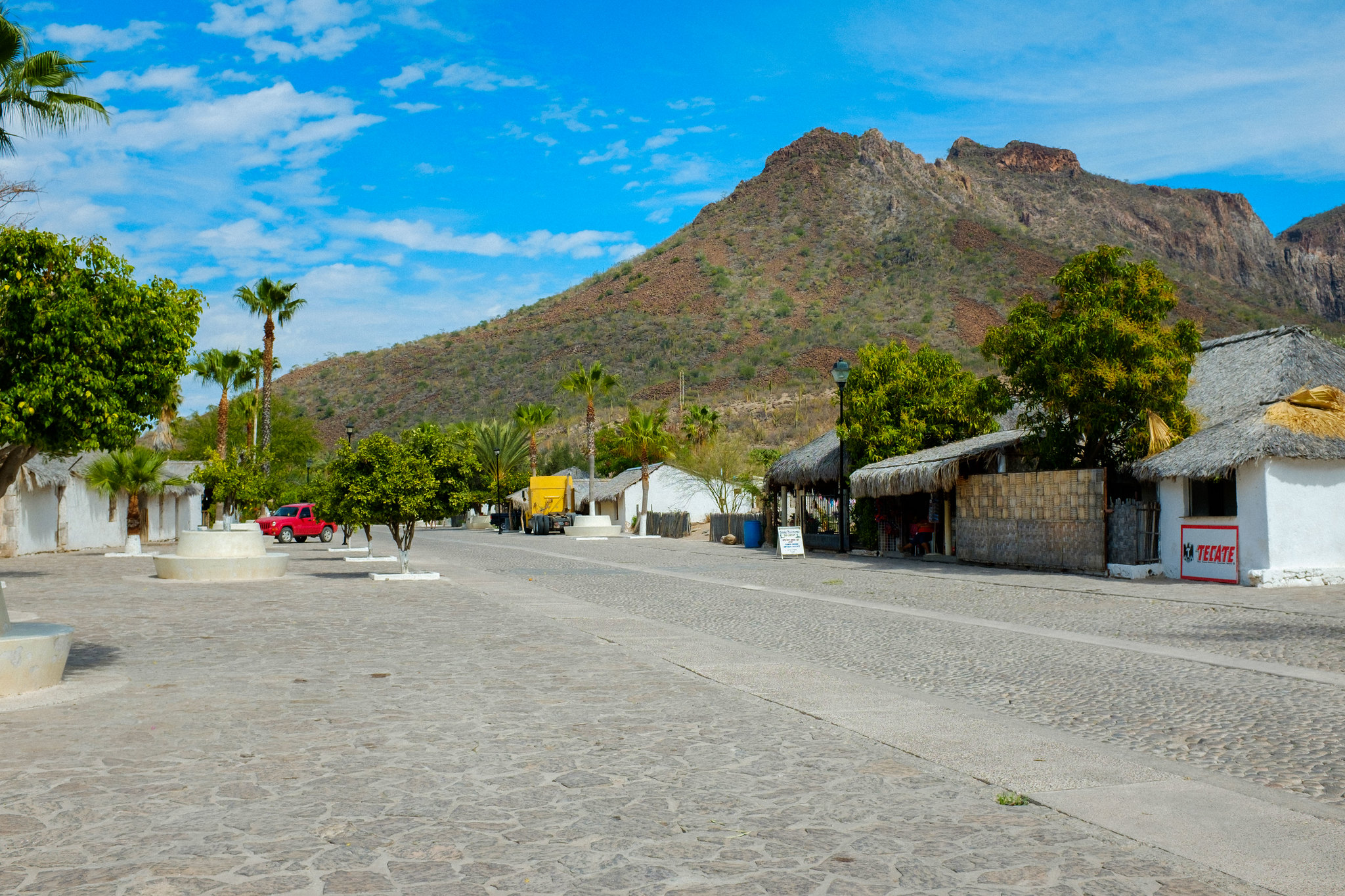 Baja has the best street dogs. 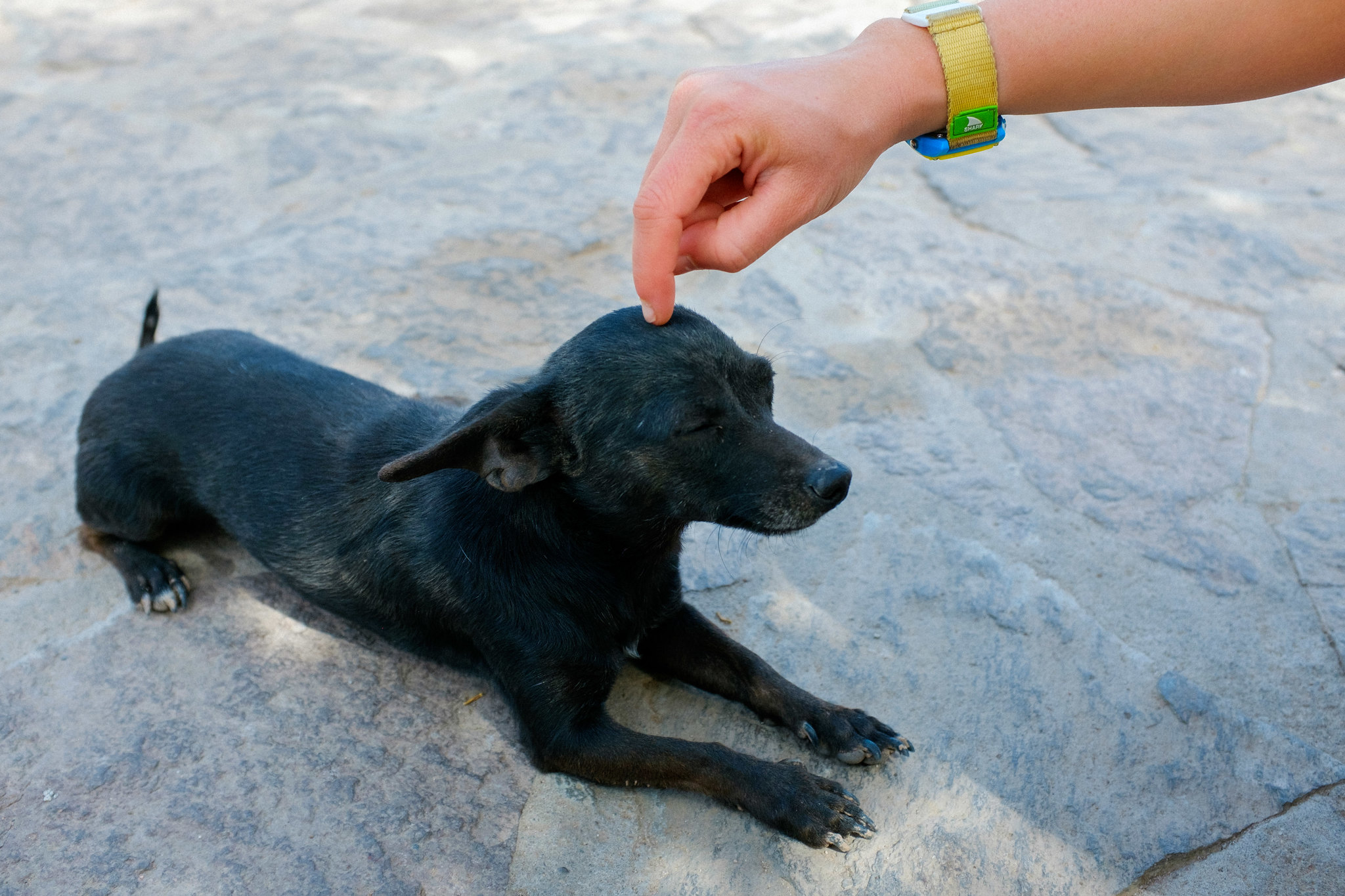 The road turns to dirt after San Ignacio, and we ride a few hours. My bike makes a funky popping sound. I look down at the drivetrain. Haven’t heard that noise before. Everything looks like it’s still good though. I keep riding.

A few miles later, my ass starts to hurt. It feels like I’m sitting crooked or something. I pull off the sandy road and look everything over again. Nuts, I was sitting sideways. One of my saddle rails snapped: 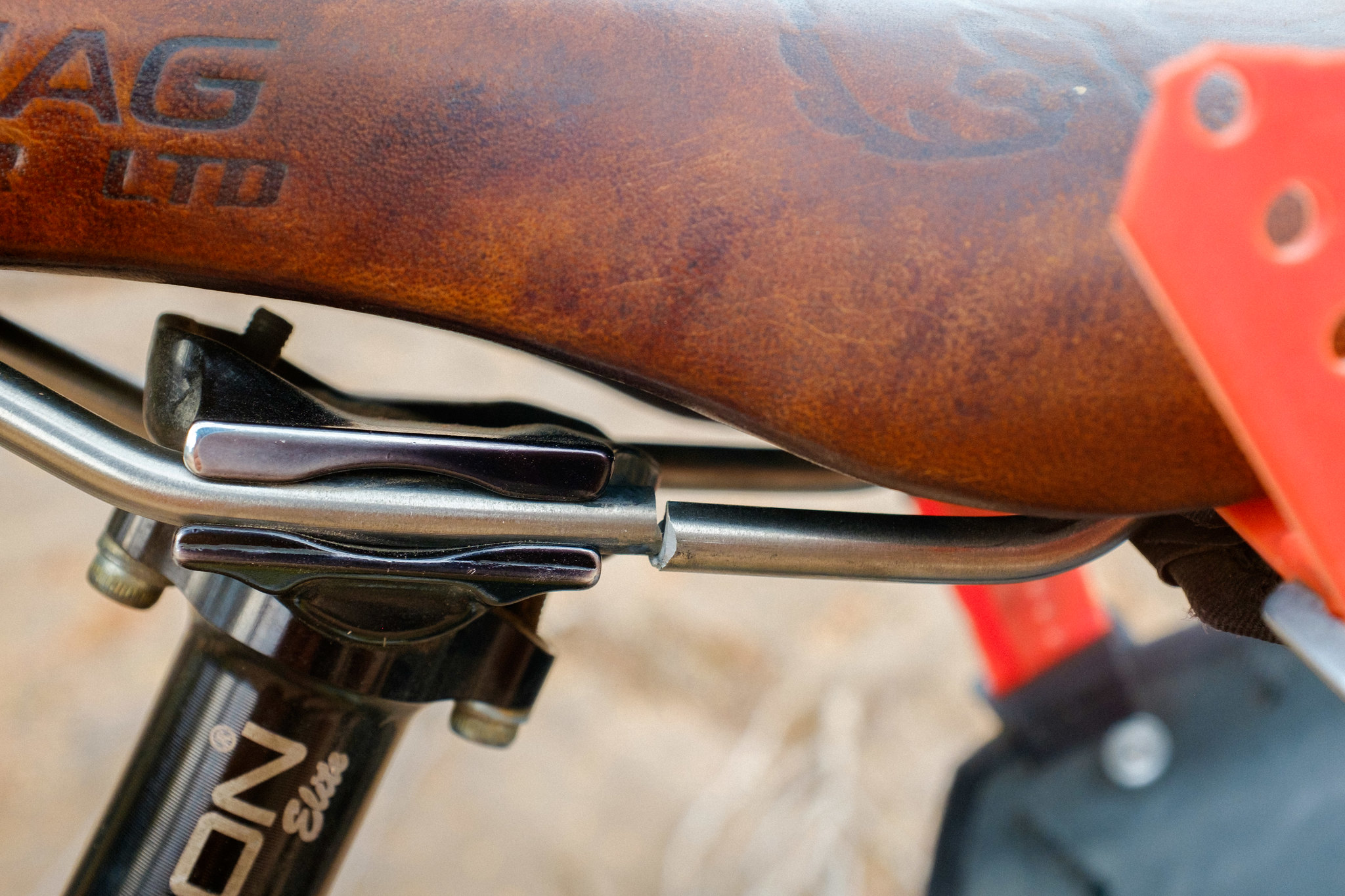 I’m bummed that the saddle broke, but I know it’s my fault since I had it clamped too far back (or maybe I’ve been eating too many tortillas). When Walt and I did the design for this bike, he slackened the seat tube angle a couple degrees from my Krampus so that I’d be able to have the saddle clamped in the middle of the rails. But when I built the bike, I found out that I was extra comfy with both the slacker seat tube and the saddle slammed all the way back. I’ll have to replace the Thompson with a post with more offset when we get back to the US. But that doesn’t help much now.

Colleen rolls up. “Can you move it forward and clamp the broken part?”

That’ll work. I slide the seat up, hoping that it doesn’t give out again.

The next day, we roll out of the mountains. How do you know you’re coming to a town in Baja? 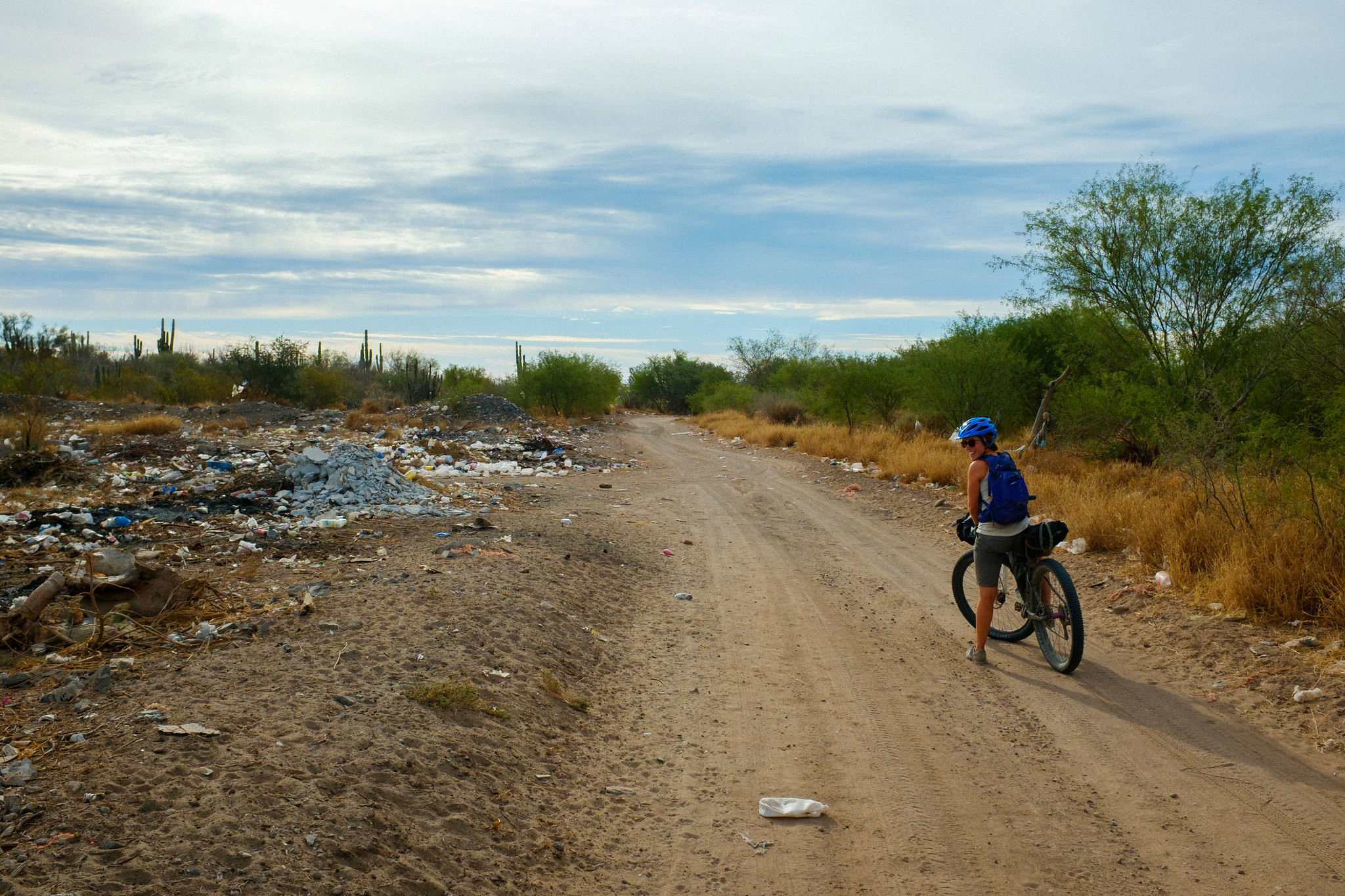 Ciudad Constitution is a busy little city in the middle of a bunch of farms. Reggaeton thumping, asada sizzling in street carts, and some dudes whooping and hollering all night until the sun rises and the roosters take over.

Surprisingly, there’s a mountain bike race finishing up while we’re on our way out of town. 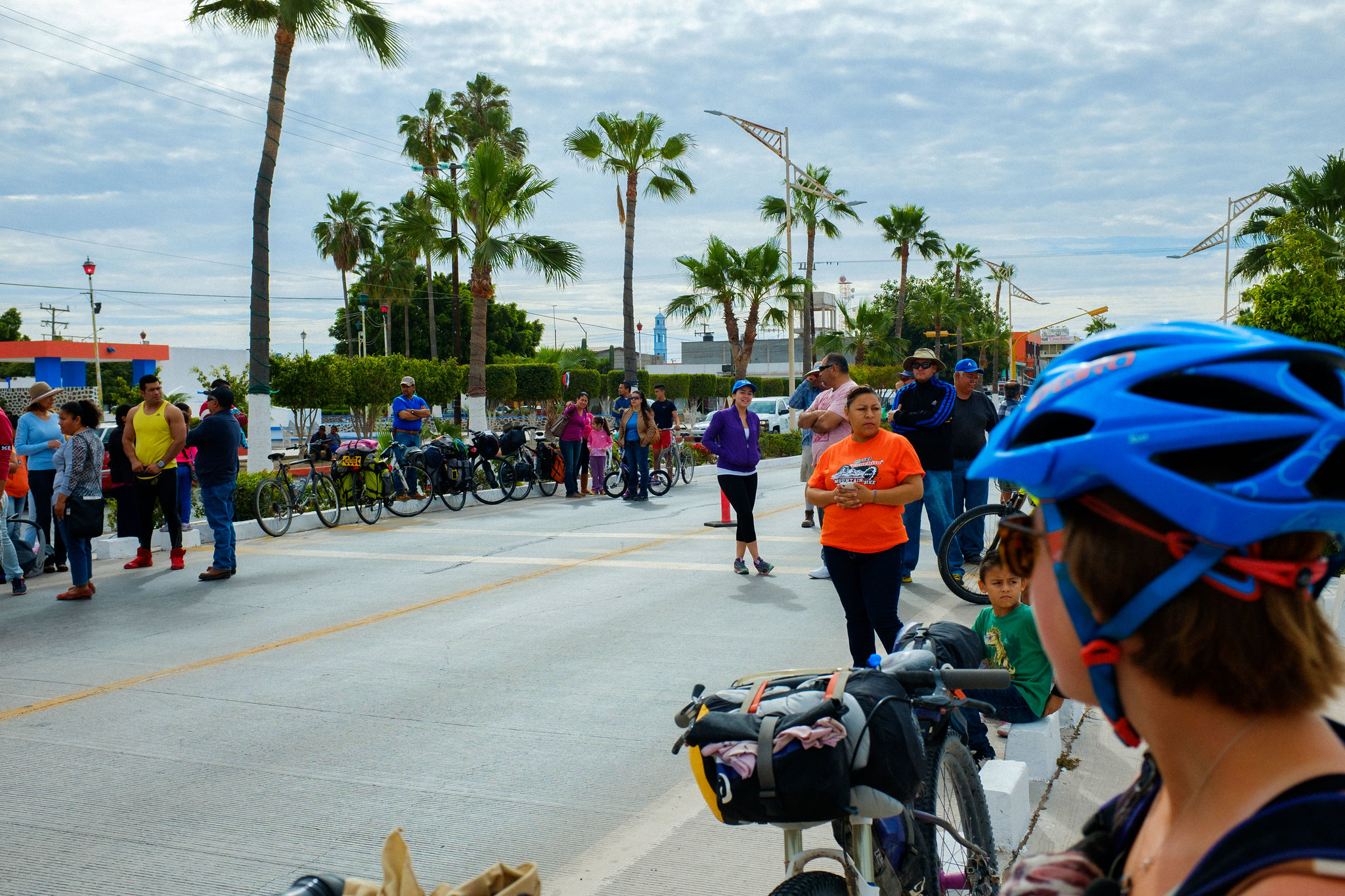 The guys racing are getting after it, and there’s a pretty good turnout to watch the finish. First year for the race, the mayor is trying to encourage healthy living. 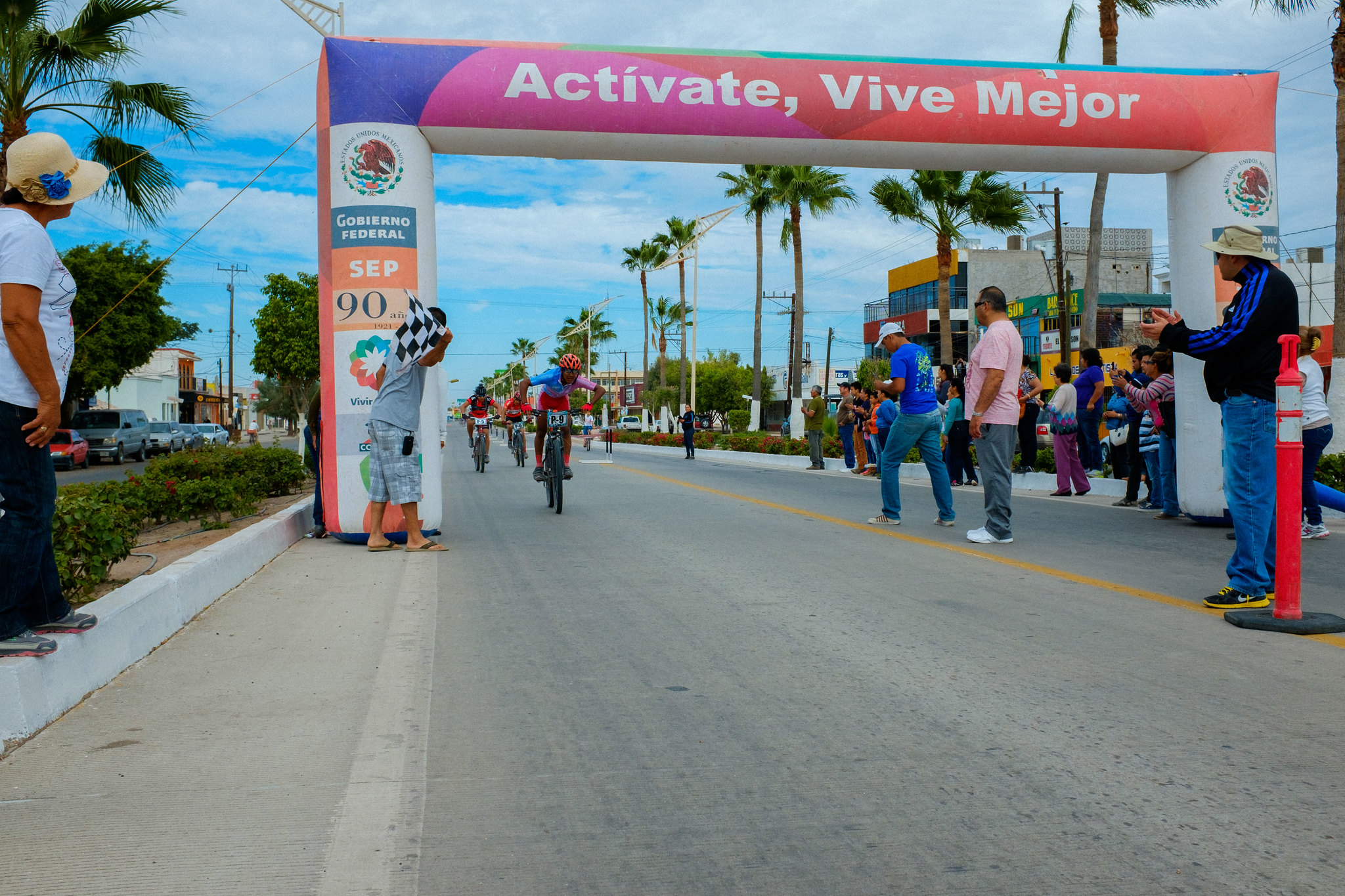 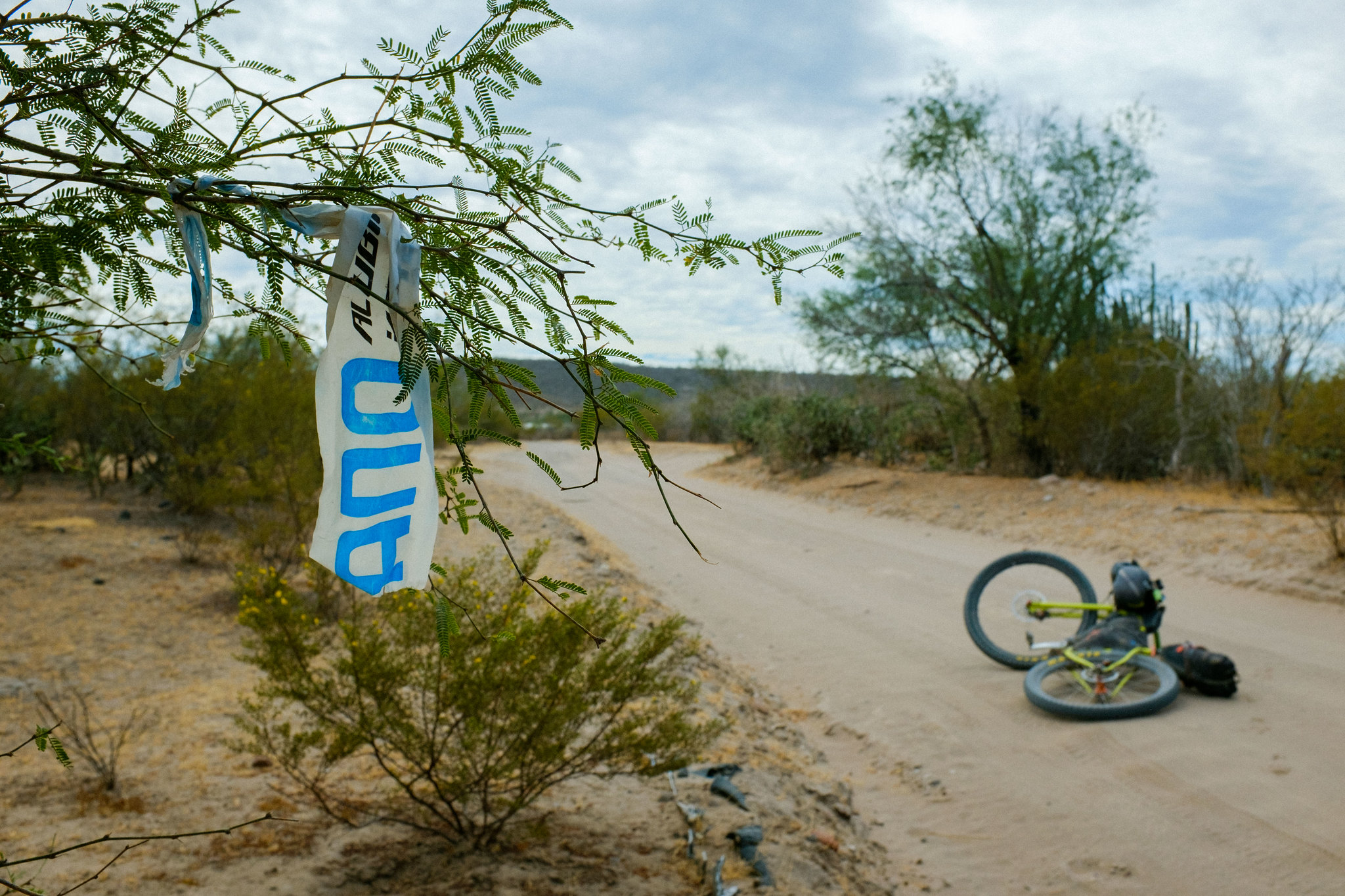 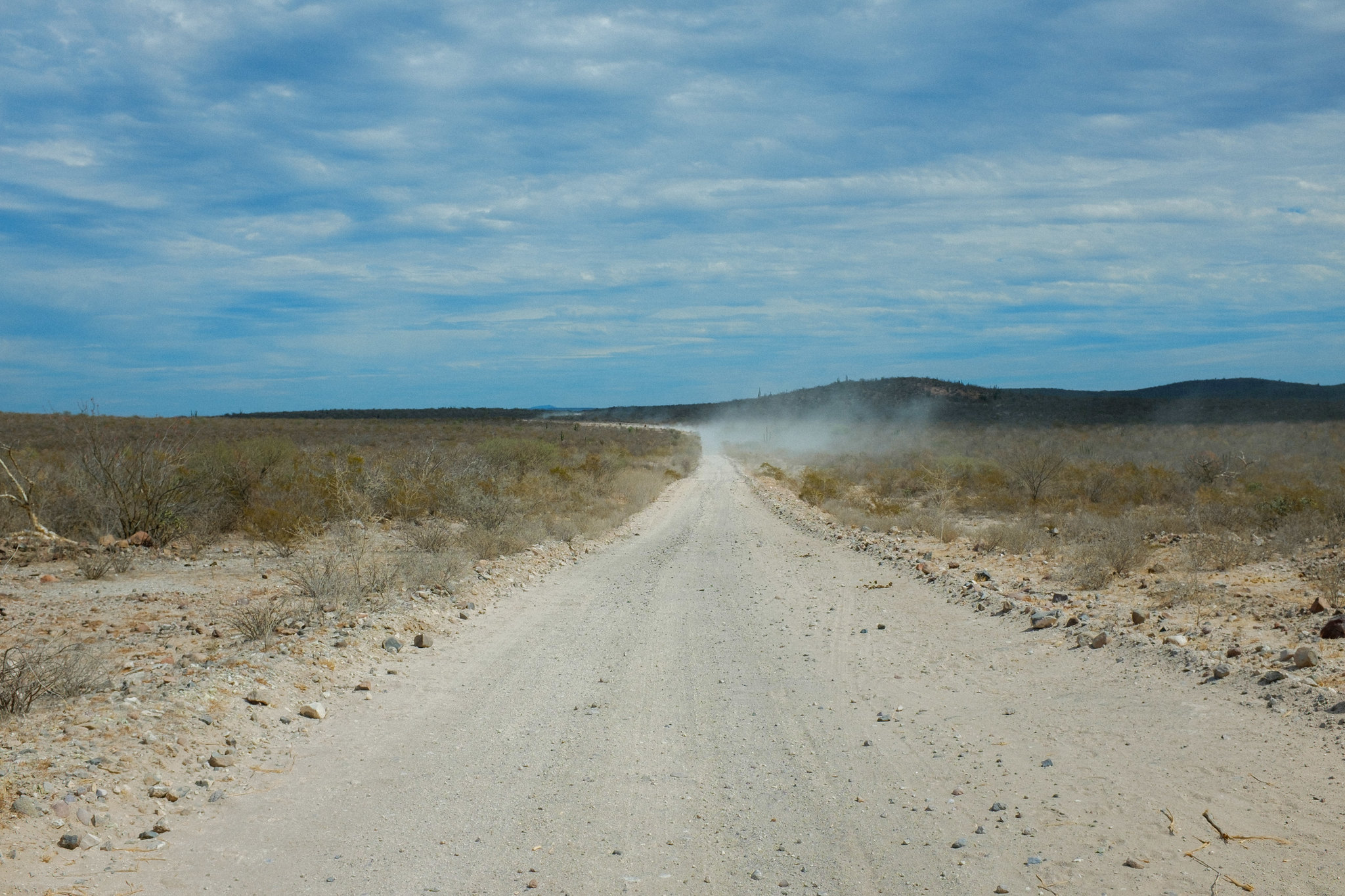 We’re passed by a big group of moto guys going into San Luis Gonzaga, but we catch up to them in town. Despite their cool Power Ranger armor and stiff-boot-induced swagger, they’re just as dorky as the rest of us. 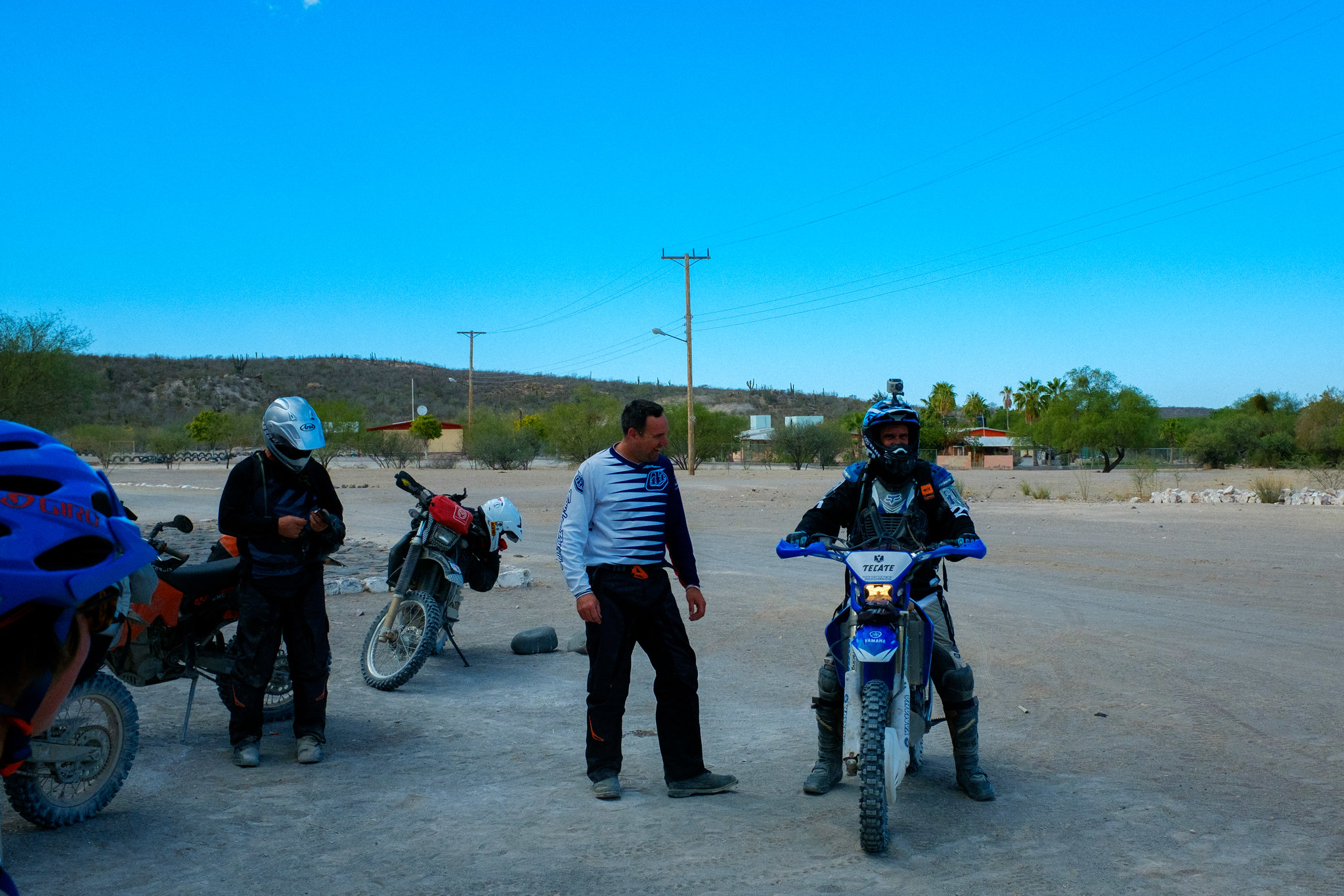 “Hey, cool brake rotors!” yells one of them, pointing at my bike. Then he fires up the engine and pulls a wheelie out of town, farty engine fart farting away into the desert. A couple locals that aren’t taking their siesta watch him leave. They don’t look real impressed.

The bearings in my dynamo hub are knocking constantly, but it’s still making power. I charge up our UV Steripen that night- we’re using it a bunch now that there’s some surface water. 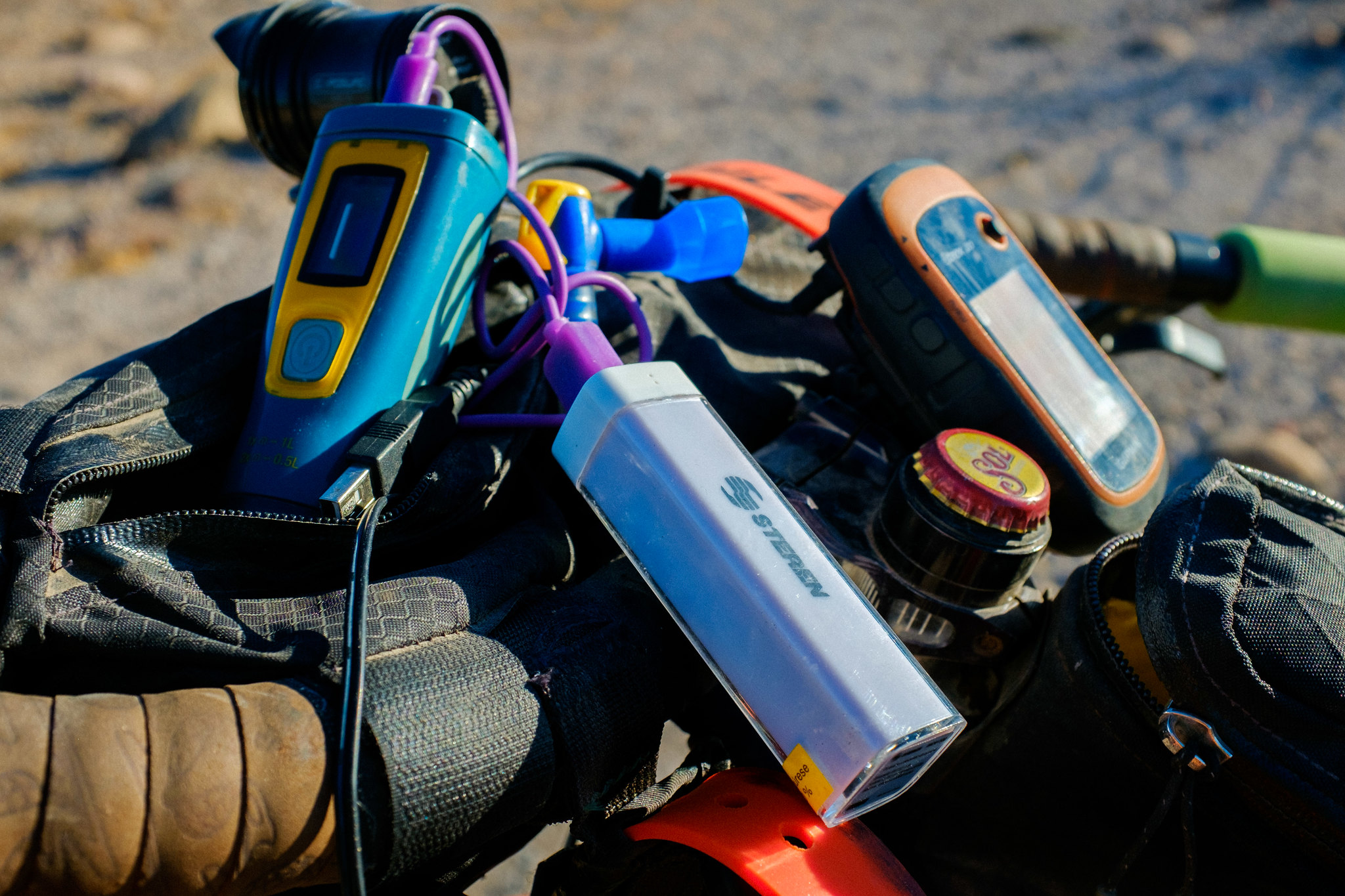 Today we’re on a road that my email pen-pal Nic Carman suggested a couple months ago (we’ve been bouncing gpx tracks back and forth all winter). With the company of the world’s fastest endurance bike racer and a mysterious friend, he’s been working on a project thingy with more information about riding on this sandy peninsula. See here: Baja Divide Thinger.

We roll through a little town to see if there’s a store around, dreaming of a cold Coke. Past a school, all the little kids stop playing to chase after us.

No store, but a guy gives us directions to one up the road, and he talks slow and clear. It’s so nice when people do that for us, I can mostly get it. Fast mumbled Spanish is still impossible, I understand it about as well as I understand mortgages.

Three and a half kilometers he says. I know that putting faith in a local’s distance estimate is setting myself up for disappointment, but he’s so exact that I believe him. 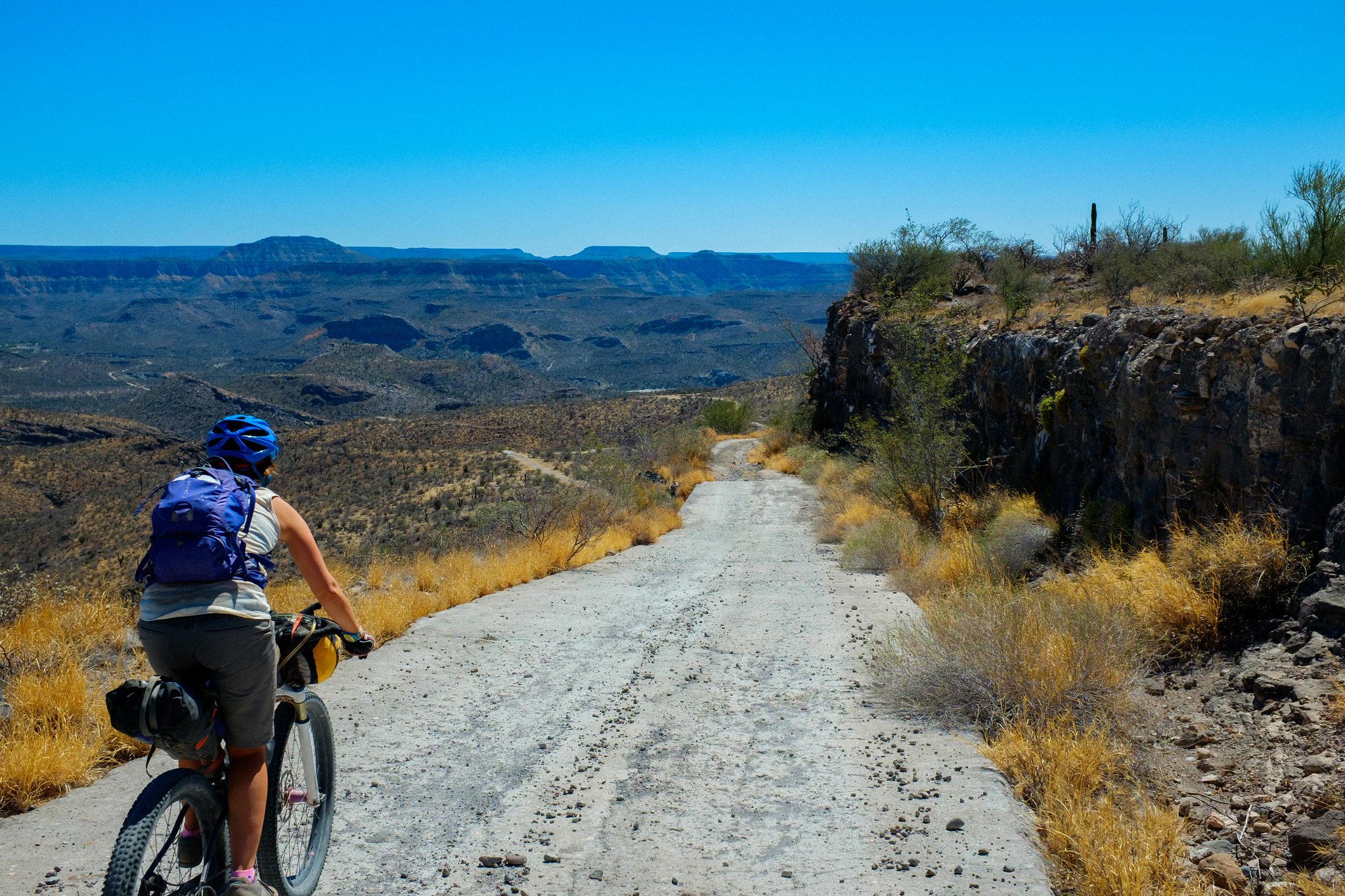 Six or seven kilometers later, still no store. We walk up a steep valley, I start to think that maybe this guy with his nice clear talking and nice clear directions wasn’t actually so nice.

But there it is- a drab grey government funded community tienda. Sadly no beer, Coke, or Doritos. But there is some luke-warm pear juice, which beats the hell out of the hot algae-flavored water we’ve been drinking. We both slam a couple juices, and hit the hot dusty road again.

The heat, the sun, the soft road. My knees are a little achey from moving my saddle forward. It’s a tough afternoon. But if you keep moving eventually you get somewhere. Finally we make it to the descent back to the coast, and San Evaristo, a little fishing town that’s well stocked with all the good name-brand junk food. 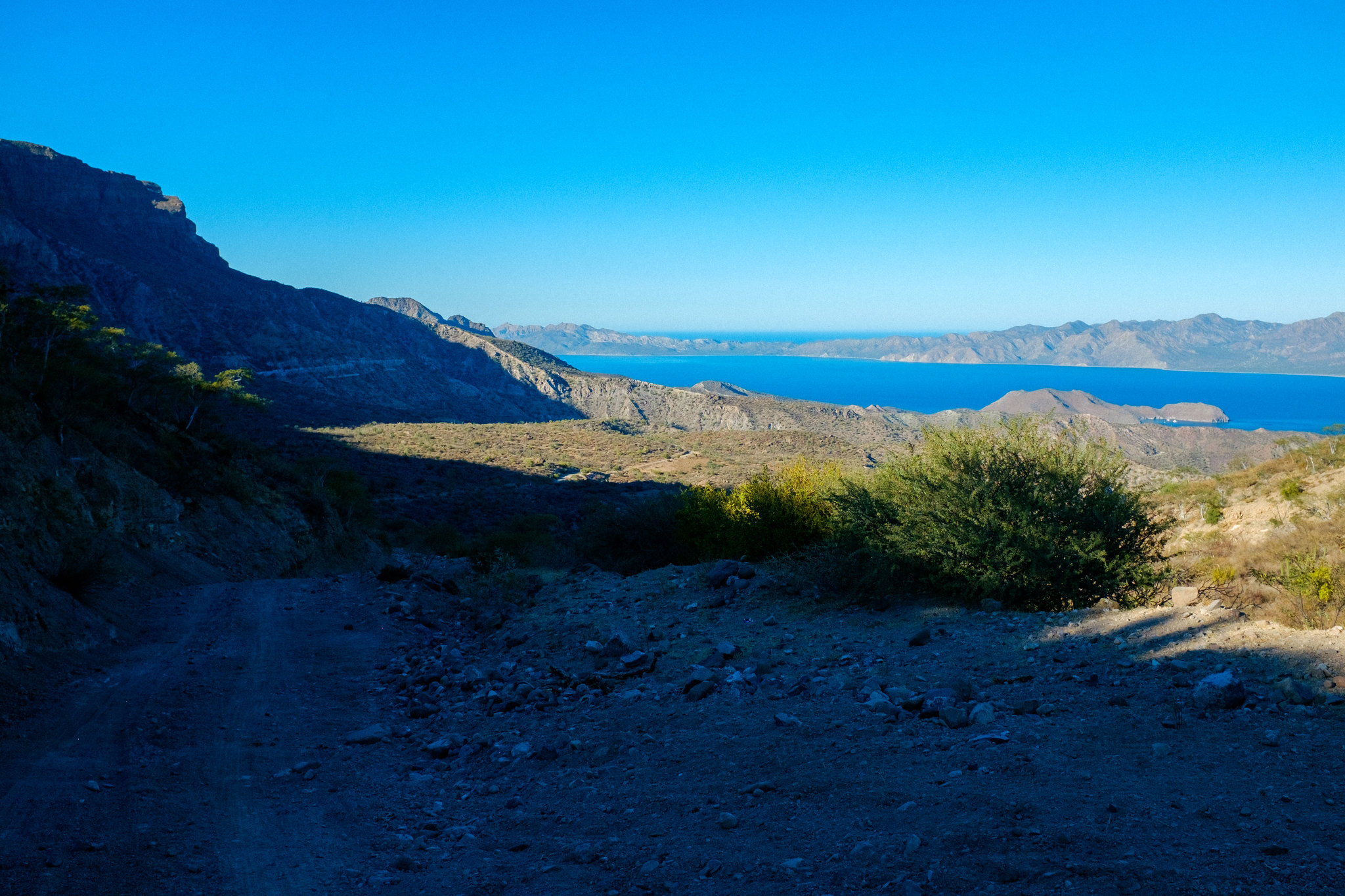 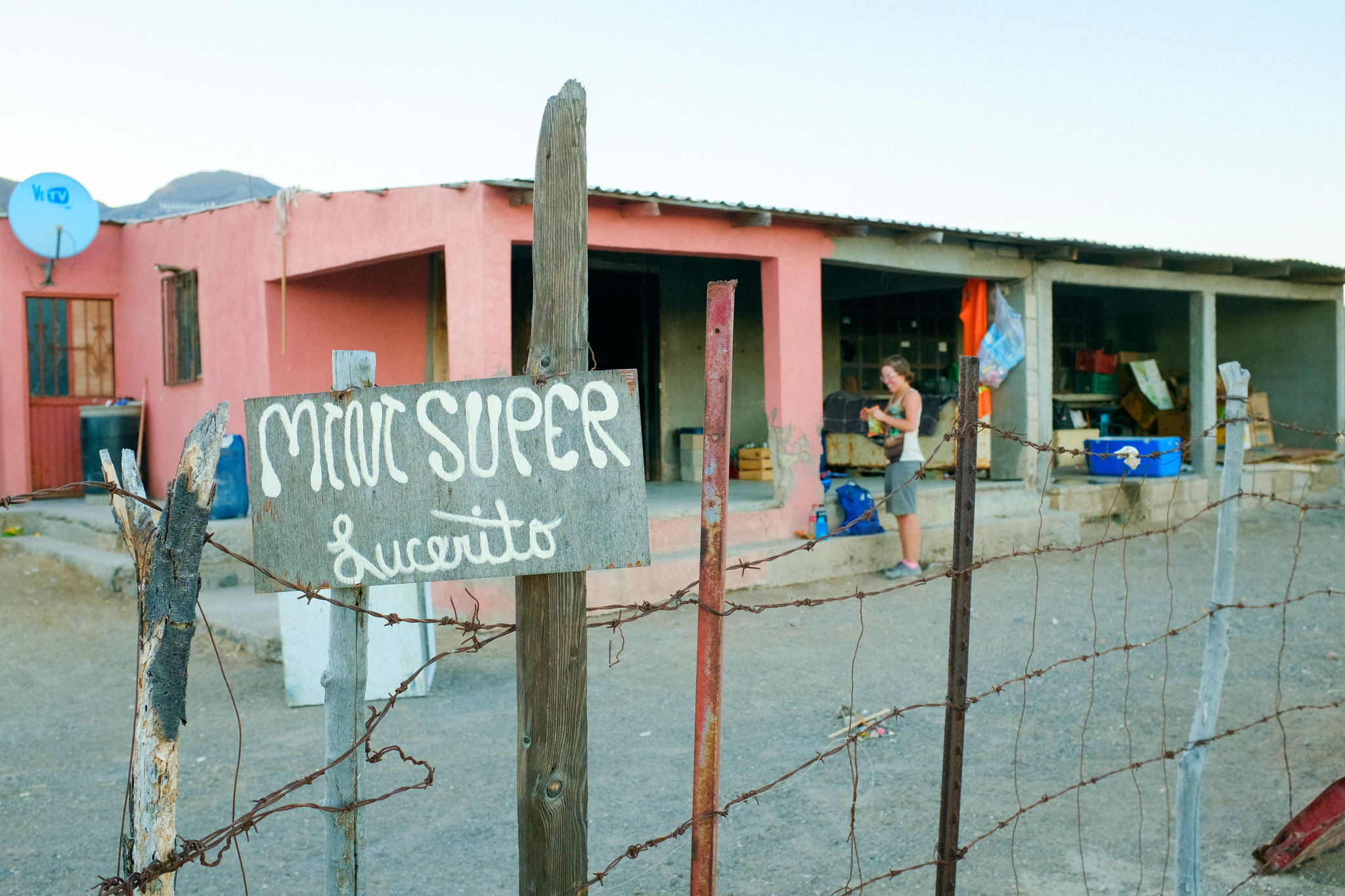 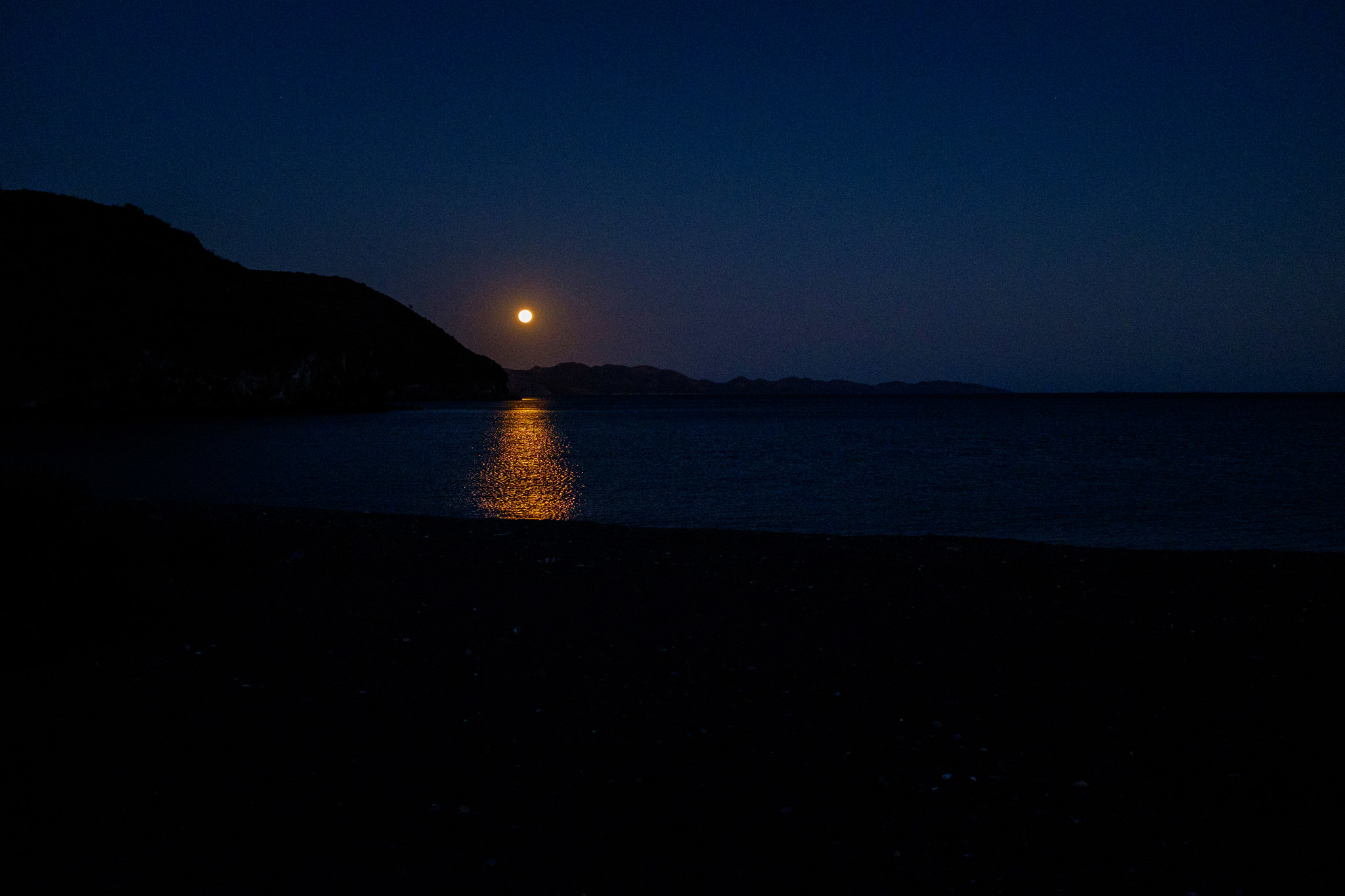 2 thoughts on “Loreto to San Evaristo”