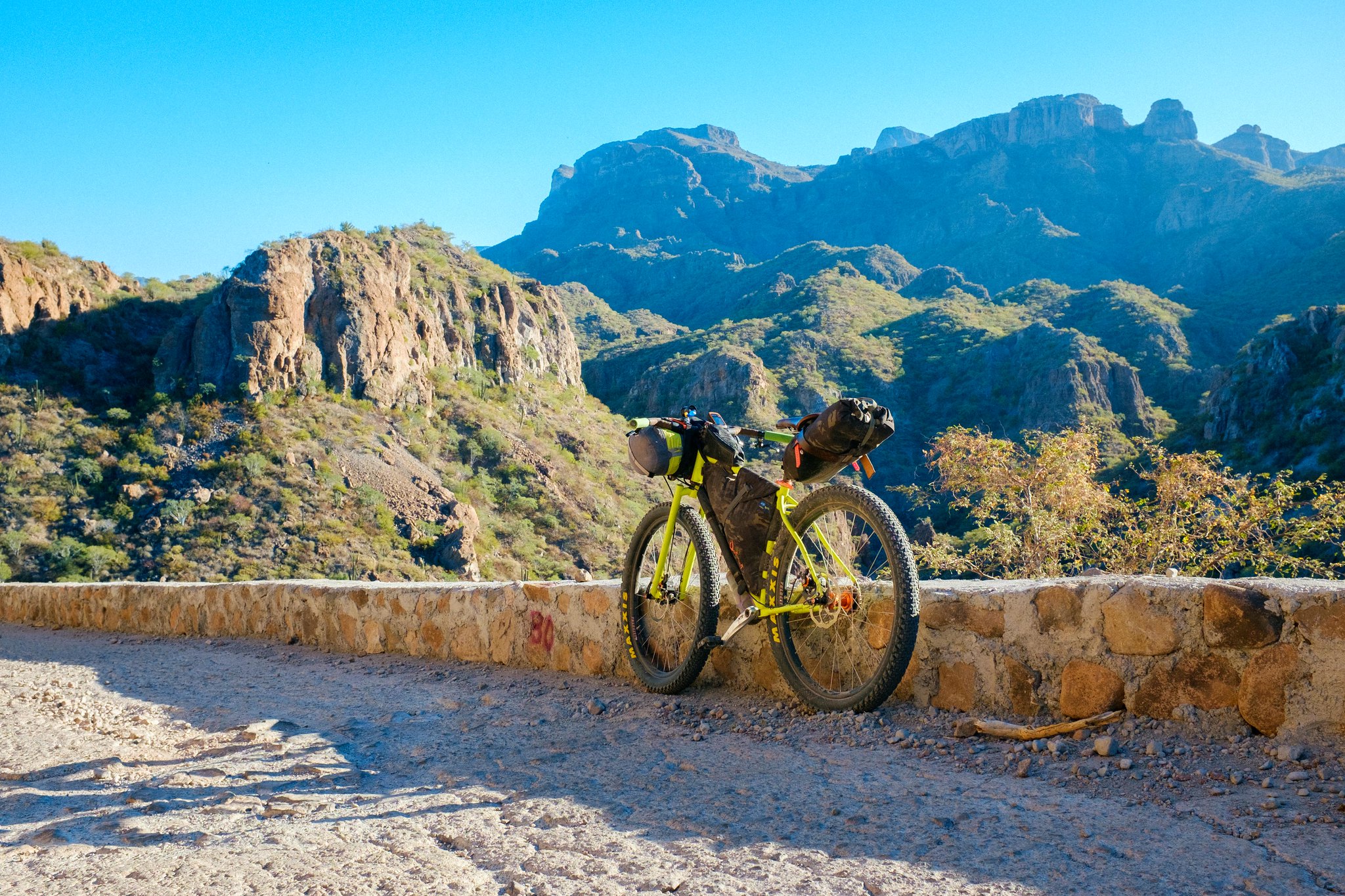 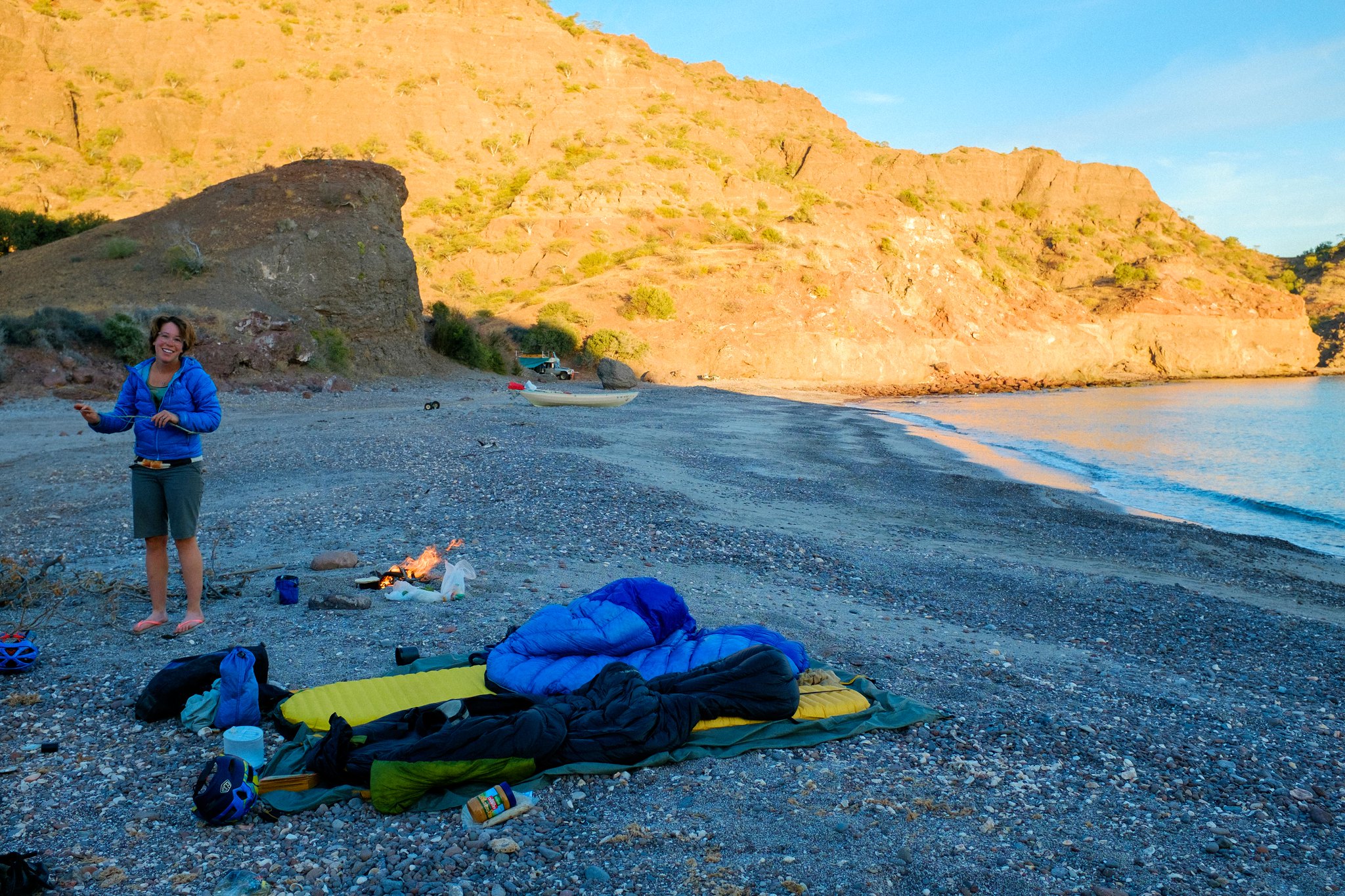 Ok, I think I’ll be good now. I stand up slow, covered in spiky grass seed. I’ve had four very loose stools (to use the clinical term) in the last eight miles. The delicious eggs we ate at that not-so-clean house yesterday really seemed like a good idea. So did the watery fresh goat cheese out of the not-so-clean ice box.

I push my bike onto the road- just have to make it another two miles.

A few pedal strokes and the hot, dusty road starts to look a little spinny, water sloshes around in my guts on the washboard. Oh man. I unclip a foot and try to get it planted in the dirt.

I turn and vomit on my right shoe. I thump my helmet onto the handlebar. Again. I groan. Can’t stop. So violent. So much force behind the evacuation. Sun bakes down on the back of my neck, road spins faster. Colleen holds onto my bike, and I try to push off and get moving again. Maybe the rancho has cold drinks. Have to get there. More- this time I manage to adjust my aim and miss the shoe. How could there possibly be that much left in my stomach? Rolling on the horrible sloshy bumpy road. 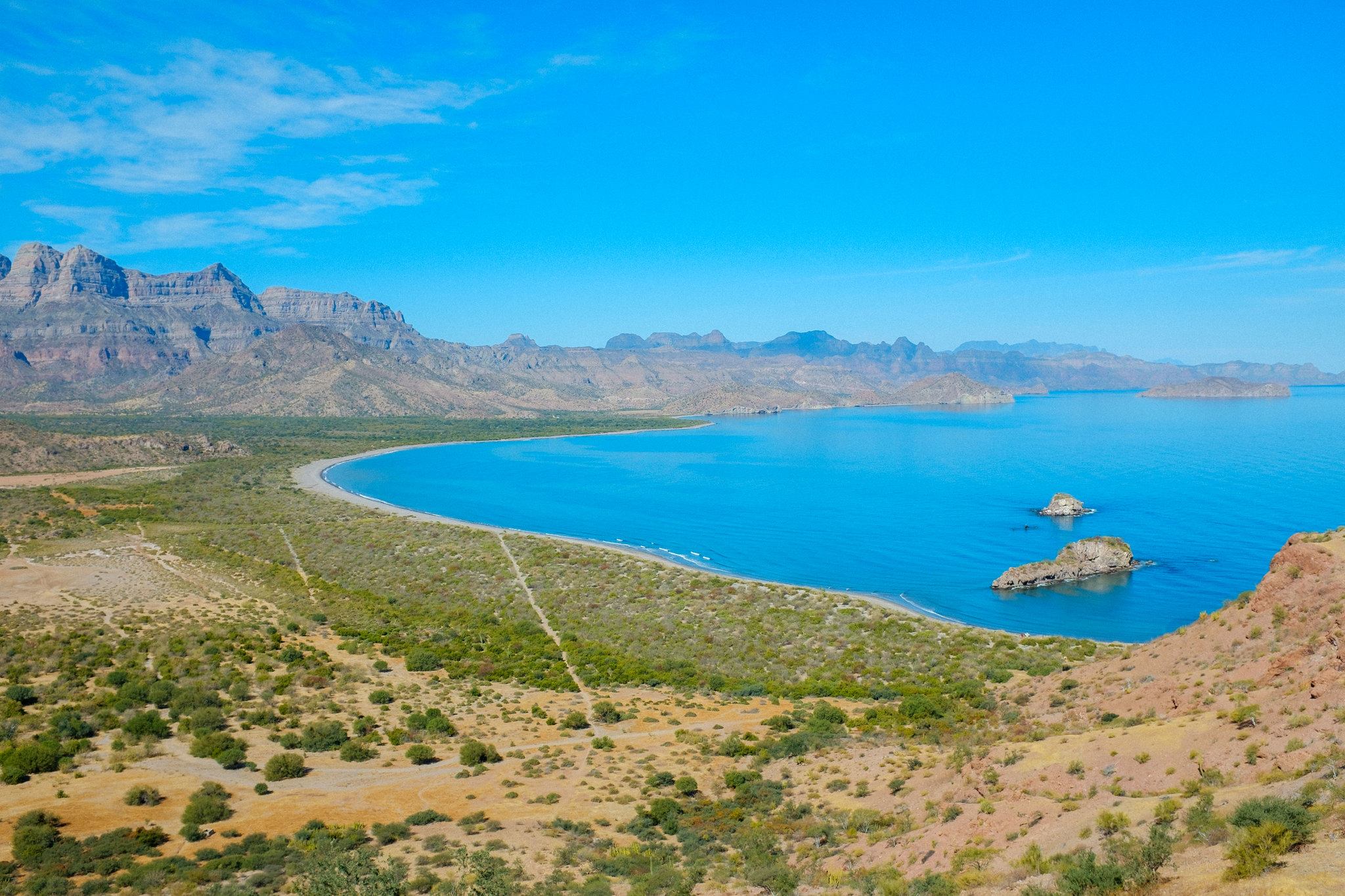 “Gotta lay down. Can you see if they have any Cokes?” I ask Colleen, hand her my wallet, and ride straight through the rancho to a palapa on the beach, and drop in the shade. This is unfortunate. Little waves crashing on the rock beach and a dehydrated thumping in my head mix in a painful brain static.

“Have a new friend?”

She leans her bike on the palapa and hands me a little bottle of water.

“This all they had?”

“Yeah, the lady from the rancho pulled it out from under her bed. She said they haven’t been to town in a couple weeks.”

“Great.” I chug the bottle- such tasty good wet water. My stomach burbles like an office water cooler. Shouldn’t have chugged the water.

Colleen sits down. Her stomach gurgles.

“Oh boy,” she says, stands up and runs for the bushes, I close my eyes, listen to the moist smacking sound of gastric juice hitting the dirt.

We lay in a dim little hut on the beach for the next twenty hours. The next morning, I can stand up again. I grab our water bags, and shuffle across the beach to the rancho’s new water purifying station.

“Perdon,” I yell to a guy bent over his car at the house next to the purificada. “Can I fill esos aguas aqui?”

He looks up. “Amigo, I can’t understand your Spanish.” 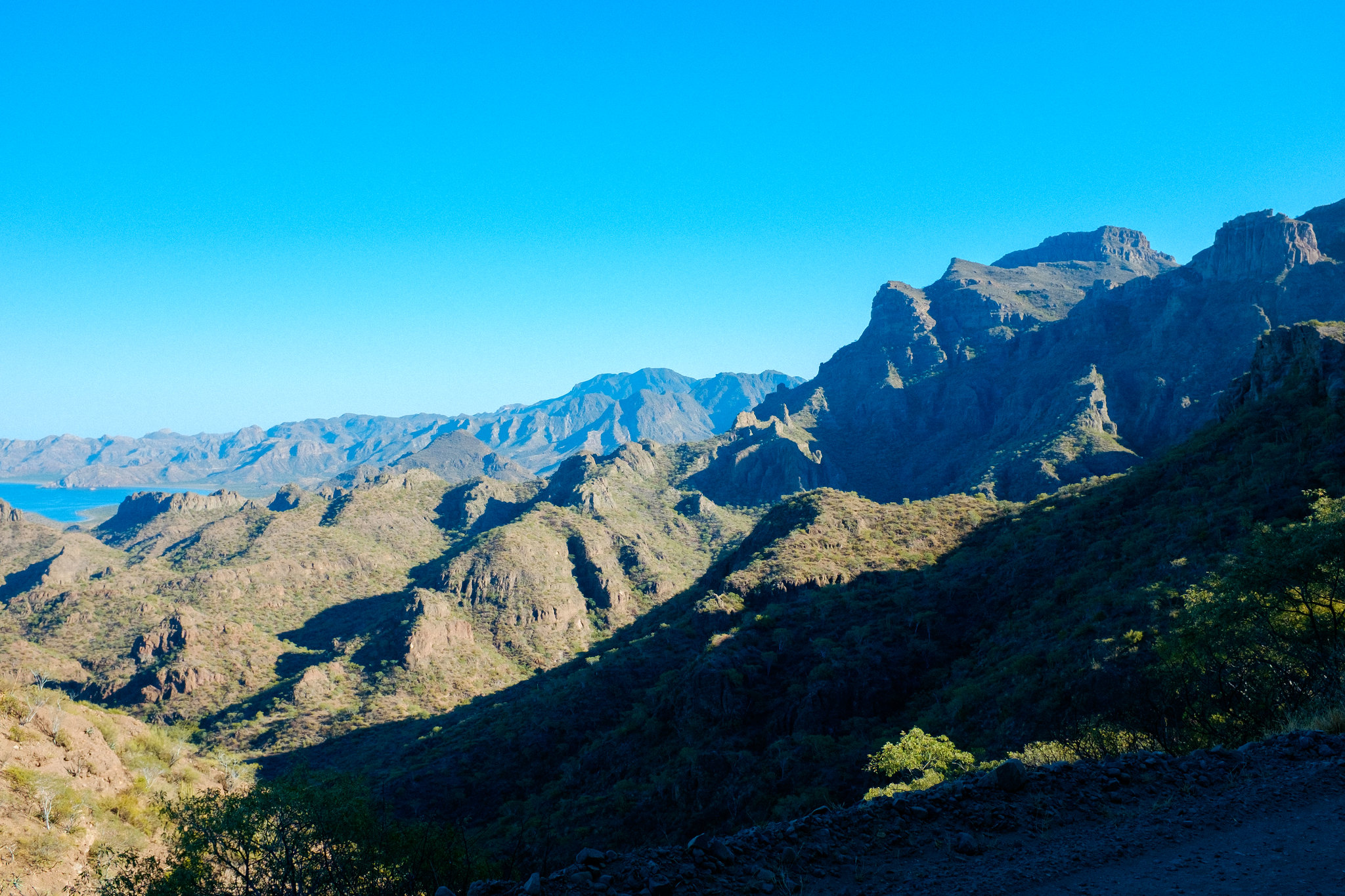 A few more hours, and Colleen’s up. Our options aren’t especially good. San Cosme is at the base of a really steep, 1500 foot climb. It’s hot. We’d have to walk the whole thing. We could stay another day, but the rancho doesn’t have any cold soda pops, and I really want a soda pop.

“Well, feeling any better today?” he says. His head vibrates when he talks.

“A little,” I say. “But she got it too,” I point at Colleen, who’s sitting on the stoop and staring at the ground. “Must have been something we ate.”

“Nope, I don’t think it is,” he says. “Flu’s been going around. I had it, Juan had it, Guadalupe had it. You’ll feel okay today, then tomorrow your stomach will be going in four different directions. Should last a week!”

“Yep. Well I sure would hate to have that on a bike! It’s bad enough just sitting around!” His head vibrates for a few seconds after his last word for emphasis.

“I had some anti-diarrhea medicine, but I gave the last of it to Juan!”

“Hey, any idea if there’s anybody around that might be willing to give us a ride to the highway? We’d be happy to pay for it,” I ask, maybe hoping for too much. But yesterday he mentioned to Colleen that he had a truck.

His head vibro-swivels around. “Nope. I don’t think anybody’s going that way today!”

We walk. It’s noon, sweat runs into my eyes. Stomach still feels bad, and pushing a heavy bike back up this hill isn’t good. A pickup towing a panga clatters up the hill, we stop and stick our thumbs out. The driver waves and smiles, but keeps going. Keep pushing.

A while later, another truck. We try to hitch again. The guy stops. Oh hell yeah, I run for the truck, hoist my bike into the bed, then grab Colleen’s. We hunker down next to the tailgate by a spare tire and an empty gas can.

“Gracias, gracias,” I yell to the driver. “Listo!”

Hey steps on the gas, and we’re flying up the tight dirt road. I’m sitting on the side with the thousand foot drop off- sometimes it feels like I’m right over the void as the back end of the truck slides around. I try to reassure myself- It’s probably fine, I bet this guy drives this road all the time, and he obviously hasn’t gone over the edge yet. The truck slides again- but he really cuts it close. I’ll leave my helmet on.

The truck stops at a loncheria on the highway and we hop out. I hand the guy 30 pesos. “Gracias, para gasolina.” He nods, goes inside, and buys a beer. That works to. We grab some Cokes (finally), then head back out on the road. 20 miles of riding, and one more truck ride later, we make it back to Loreto. 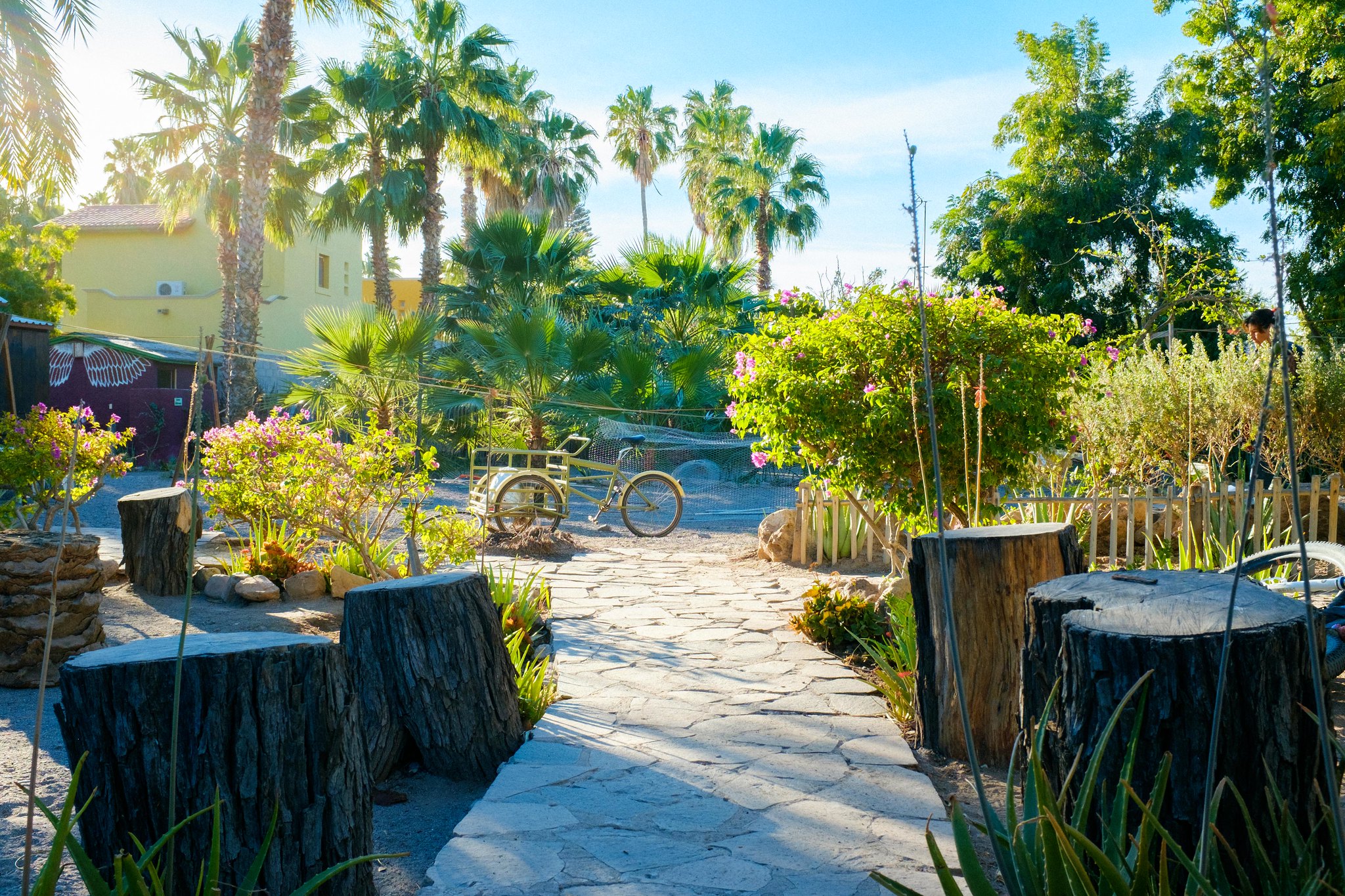 Back at the Palmas Altas, the best place to stay in Loreto. We stay almost a week, waiting for our digestive systems to get right again. That makes more than two weeks total in Loreto (we spent a week there before we left for our misadventure in Agua Verde).

But that’s ok, it’s a nice little town. Even if lots of tourists complain that there are too many tourists. “You know man, there are just too many tourists? Like, I know I’m a tourist, but I want to be the only tourist, because authenticity. I want things too be nice, but not too nice, because too nice is gentrified, and that’s not real.”

We’re in town for Carnival, sitting on the sidewalk watching people set up for the parade. A semi truck that carries a whale sculpture is trying to back down the street. The police wave him on, keep coming. The truck runs into a parked car. Stops.

The street is full of people, and nobody says anything. I crunch on a chip, this is good. The driver pulls forward, then backs up again, a little faster, crumpling sheet metal groans, and the car starts to slide. A cop finally blows his whistle. The truck sets up again then gets it right and skirts past the car.

When he moves off, the front quarter panel and door of the car are totally smashed. A cop looks at the damage- it almost looks like he’s going to write a ticket. Then he shrugs. Guess not.

Later, when we’re walking back to the campground, Colleen grabs my shoulder- I’m about to step into an open manhole in the middle of the sidewalk. I should have been paying attention- it’s not even close to the only one.

Lots of people complain that the US is too litigious- they should check out Mexico, and see if they really dig a place without legal accountability.

The next morning, we’re talking to a guy on a motorcycle tour. His friend actually did fall into one of the sidewalk holes. He broke his collarbone. Shouldn’t have done that, most Mexicans would say. 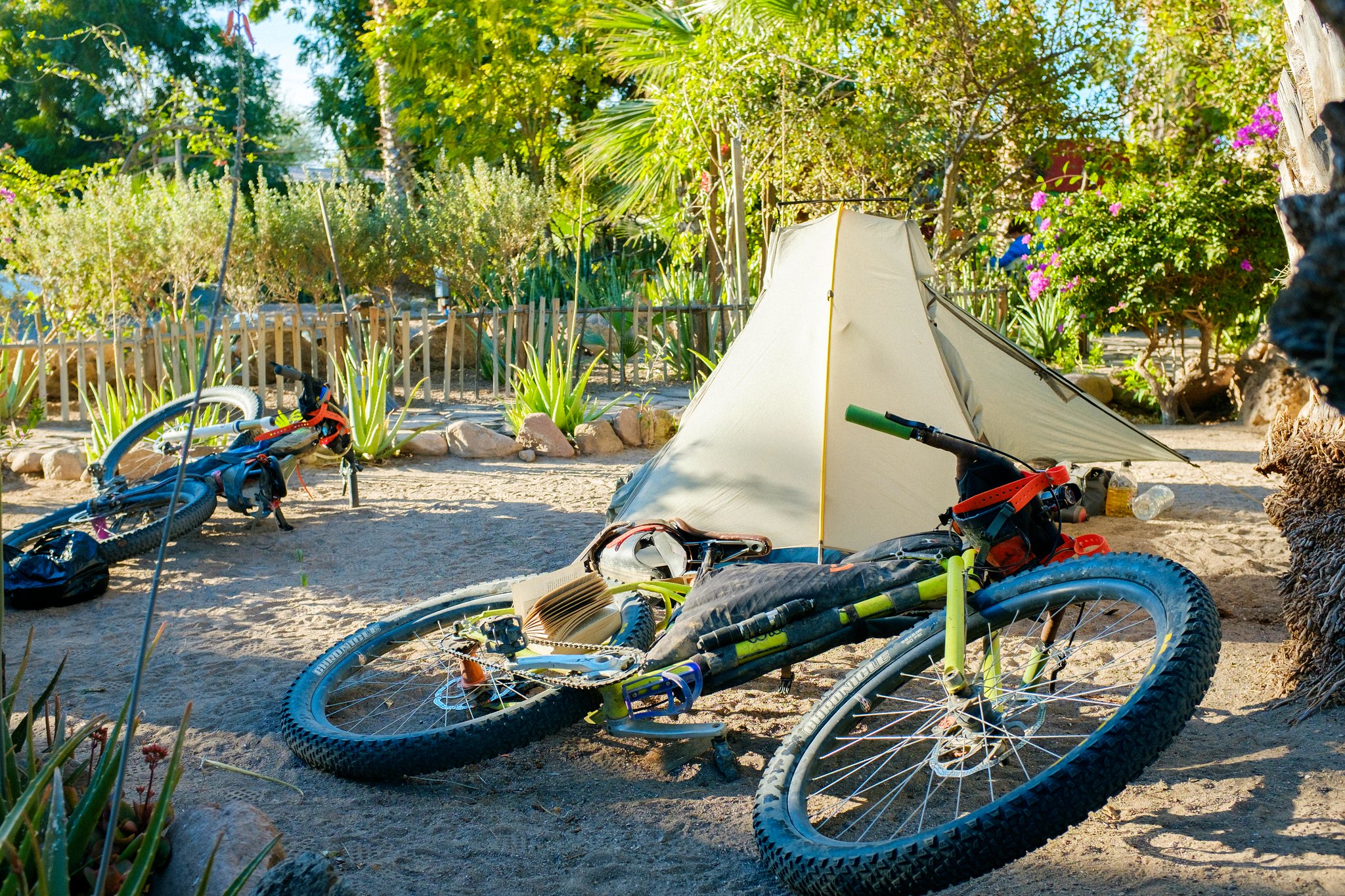 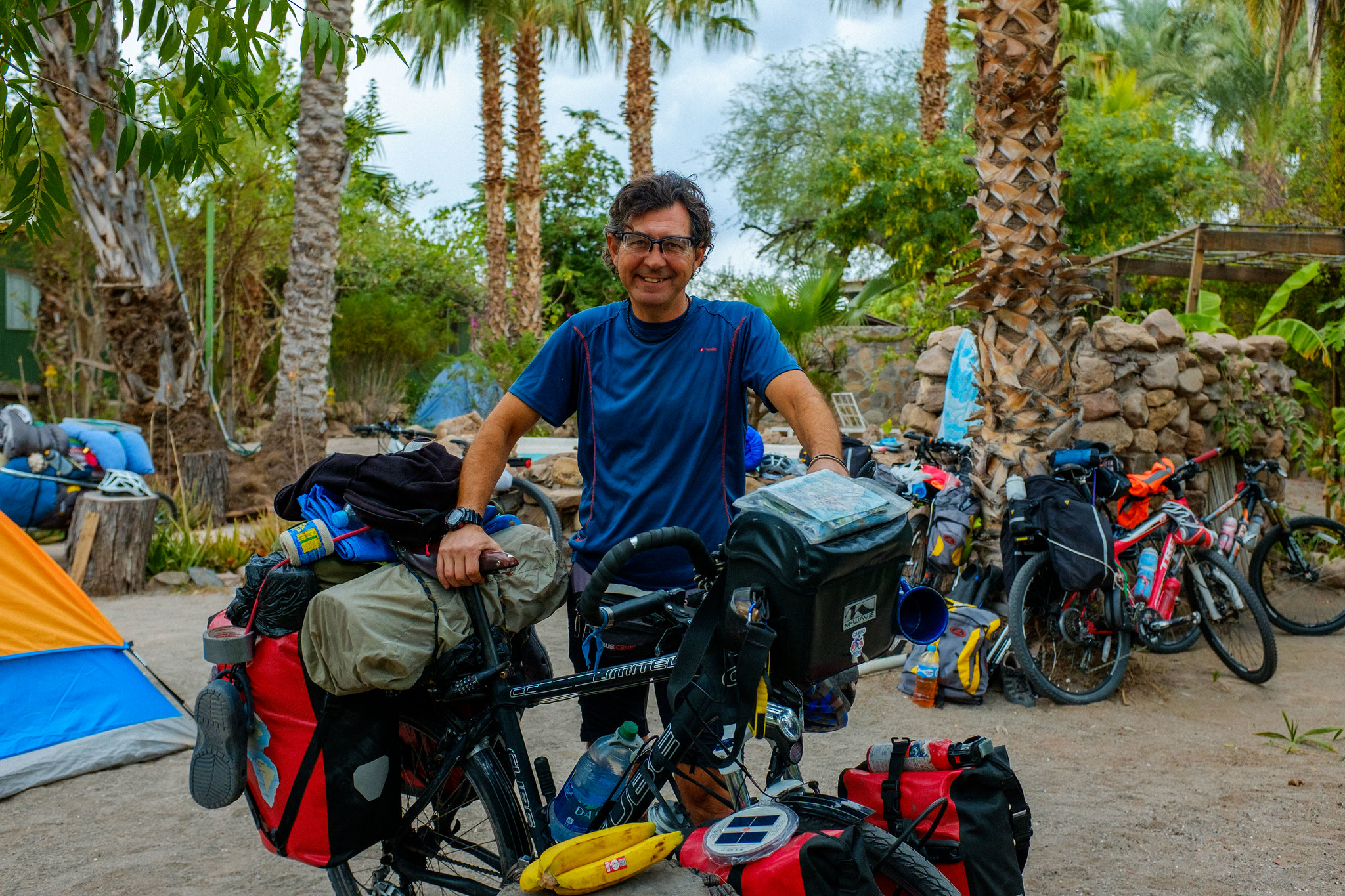 The one exception to the south-bound rule was this couple of sort of goofy Koreans that have been riding around the world since 2007. They’re headed north from Argentina, dragged their massively heavy tandem and trailer rig across the Bolivian Altiplano in winter, toured in Iran for two months, were robbed in Guerrero, and hospitalized by a flower pot that fell out of a window in Mexico City. No matter how cool you think you are, there’s always somebody cooler. And that’s pretty cool.

We’re in La Paz now, hanging out for a couple weeks. We’ve had a big mess of broken bike parts in the last couple hundred miles (more on that in a couple days), so we’re planning to fly back to Pittsburgh, fix stuff, do some work on the Shark, then get moving west again. I’d like to take another crack at the Arizona Trail Race before we run out of loot. Although I really don’t want to leave. I like it here. 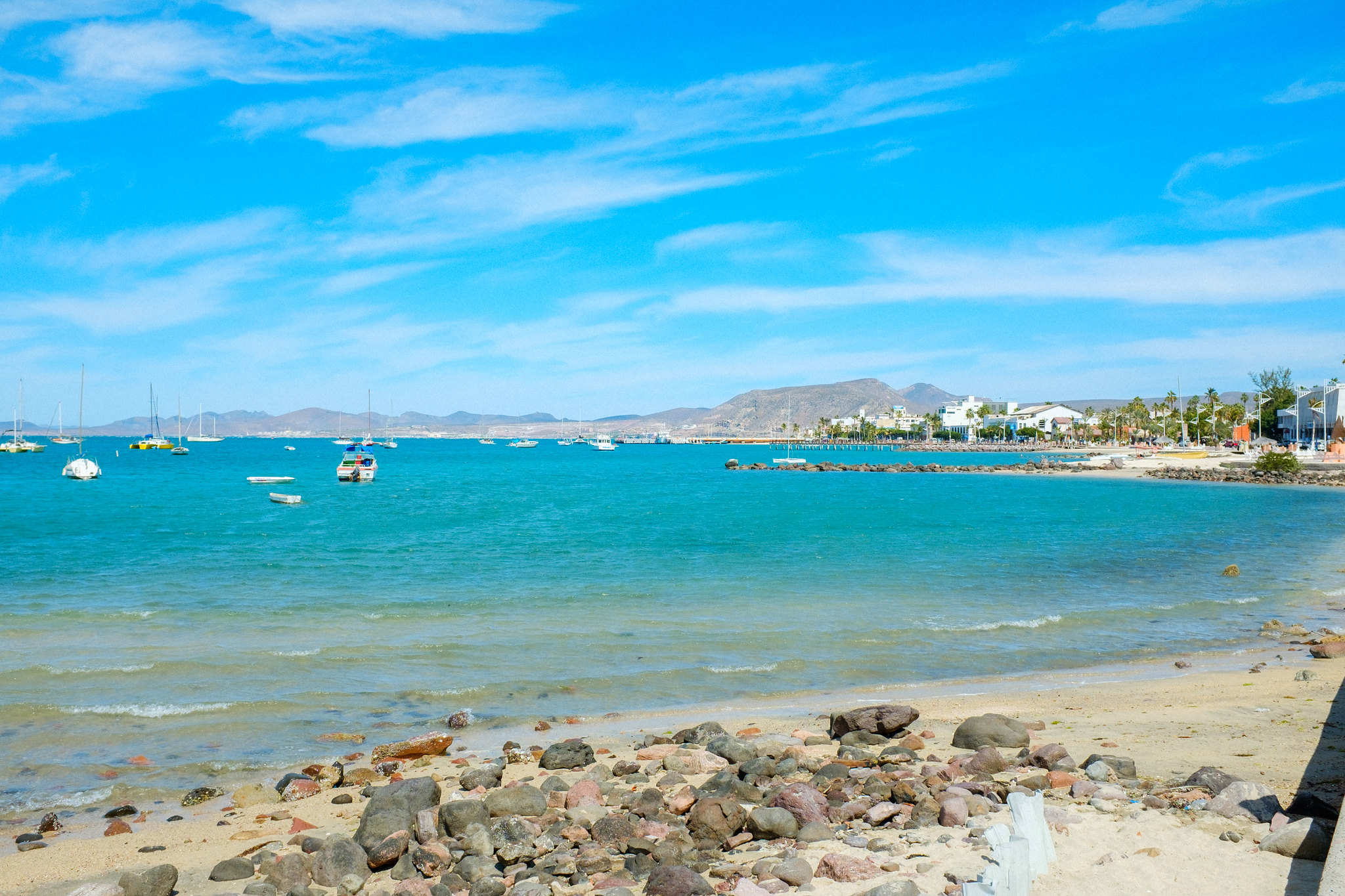 2 thoughts on “Loreto to Agua Verde to Loreto”