This is the Great Blue Shark.

It’s a 1975, the inside is covered in fake wood paneling, and it smells like oil. It booms and squeaks when it hits a bump, and the small-block Chevy motor sucks down a gallon every 10 miles if I drive it really nice. It’s bright blue. It has a go-faster stripe, but it doesn’t go faster than 55. It’s perfect. We’re going to live in it.

About two weeks ago, while I was killing time in the ski shop, I started looking for old stuff on Craigslist. I found my way into the RV section, and way at the back of the listings, there was this thing. The color caught me first- but then I started looking through the rest of the listing. New engine 4,000 miles ago, transmission rebuilt, one owner, and a stack of receipts for all the repairs since the guy bought the thing back in ’75.

A week later, Colleen and I crawled through Sunday afternoon post-ski gridlock on I70 (it took about six hours to get to Denver- usually takes three), into some weird Front Range sprawl by Commerce City, and took the van for a test drive. I was smitten as soon as the old V8 cranked over. Two hours later, I was cruising back over the mountains at a laid-back 45 miles an hour.

I’m calling this a project because I think it strikes a nice balance between “we gonna move ina van an park it dahn by the river,” and “we’re joining the tiny house movement and reducing our carbon footprint by going off the grid. We want to be able to look in the mirror and see ourselves as citizens instead of consumers. Corporations are evil. Don’t you just love the smell of patchouli? Some days I miss Jerry so much I can’t light my incense because my tears soak everything I touch.”

Every first of the month, we’re reminded of how much paying rent sucks. We live in a pretty small log cabin, way outside of town. It seems like it should be cheap, but because we’re in the same valley as Aspen, it isn’t (and I get it- it’s nice here, and there isn’t a lot of real estate, so everything is pricey). But we’re hardly home, I leave for work at 5:30 and get home at 8:30. Since Colleen has been shooting photos at the paper, she has all kinds of weird hours. On the weekends we go camp in the desert anyway. It’s insane to blow half of our monthly pay on a place to keep our mattress.

But it’s not really about the money- it’s the time investment that kills me. I’m trading half of my waking hours for a roof.

Sure, we could easily move to the city, find better paying jobs and a cheaper place to live. But I think I’d rather jump headfirst into the spinning blades of a jet engine on some departing billionaire’s pleasure rocket.

So the van seems like a really sweet option. Colleen agrees. Which is rad.

It’ll be great. We’ll park in super pretty spots, drive our house to races, and it’ll be easy to motor to a new spot when we want to move. And when we travel we won’t have to try to get out of a lease agreement, or come up with first, last, and security as soon as we get back. It’s ideal.

Since the space is small, we’ll own less and consume less, which makes me a very happy guy (I wasn’t entirely kidding in that earlier paragraph).

None of my friends or family have been overly surprised by the van plan- after all, I’ve had way less plush living situations before. Two seasons in a tent behind the bar in Ohiopyle. 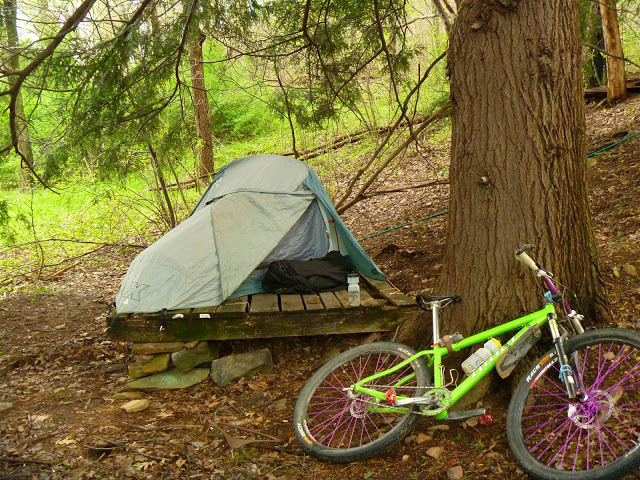 And three years in this dirt hole with a dozen raft guides. 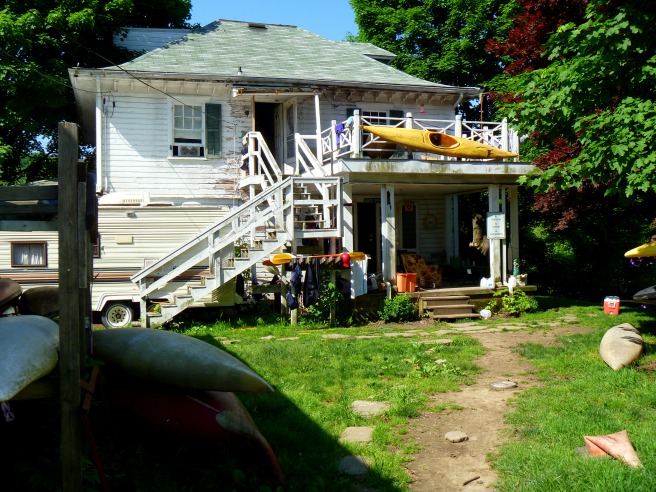 I also have facial hair, wear plaid shirts, and share a name with Heaven on Earth for backwoods libertarians. So a van in the mountains seems natural. But as for Colleen- my god, the well-meaning skepticism. A cute girl living in an RV? Where will she put on her lipstick? And take bubble baths? It’s 2015, and apparently women are still dainty and frail, even when they aren’t. But I’ll stop being offended for her.

The plan is to move in this May or June. But we’ve got a little sprucing up to do on the inside first. First project is to re-insulate the cab-over sleeping area and build a bigger bed.

Colleen spent a day blasting off all that nasty 40 year old glue with a wire wheel (if that’s not proof that she’s on board with the project, I’m not sure what is). Then we’re going to build some new cabinets, paint over the sweet wood paneling, and tear out the fuzzy carpets.

A solar system and a little wood stove are on the list for later.

If we get sick of tripping over each other, we’ll just find another place. Since our rent is so expensive, and the Shark was so cheap, it’ll only take three months of van living for us to break even.