Eight of us are piled next to a keg into the bed of an old red Toyota pickup. The truck turns into a dark field, and bounces down a dirt path. It stops, I drop the tailgate and everybody jumps out.

A set of halogen work lights are shining on a blue tarp covered pit full of jello. Music is blasting into the dark hills, and the entire town is standing around the pit. A guy skips around the edge of the ring with a little white garbage bin full of money.

“Common folks, let’s throw some money in for these girls!” he yells, and shakes the bin.

One guy pulls his truck up to the ring, the crowd parts, he shines his headlights into the jello, and everybody packs back around the truck.

“Alright, we’re all ready to get going here,” says the announcer, “The rules- three 30 second rounds, two girls enter, one girl leaves!” The music blasts back on. 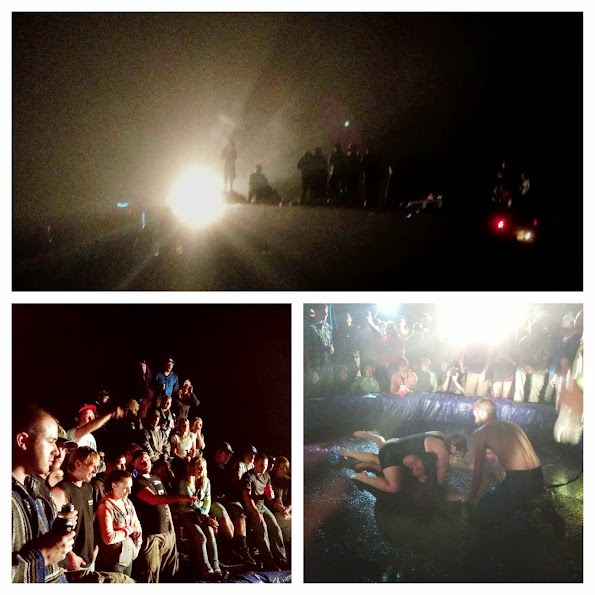 He calls out the names of the first two female raft guides to wrestle. They jump into the ring, the ref drops his hand, and they charge each other. They’re immediately on the ground, rolling and slipping on each other, trying to get an advantage. The jello splashes out of the ring, Colleen gets hit with a big glob and squeals. Then the round ends.

A drunk guy from one of the other companies falls into the ring. The ref grabs him and tosses him out, which pisses the guy off. A fist fight breaks out, and draws in 20 people in seconds. The DJ plays some soothing music to try to break up the fight.

“Hey!” one of the girls yells, “Stop being assholes! It isn’t always about you guys. This is our night.”

Two more girls get into the ring.

“Dude, shut up. You suck,” yells somebody else.

“Yeah, seriously. You’re being the worst.”

He shuts up, and moves to another side of the circle. My friend T has her first match, and immediately slams her opponent into the jello. Rad. She calmly makes her way through the rest of the girls- forces them into the ground, then gives them a friendly hug.

A couple hours later, the final match is about to start. I know T is going to win easy.

“Hey, let’s scoot out of here and get back to town,” I say to Colleen. We walk out of the field and back down the road.

“Montana, you ready to go?” says my friend Crandell through the cracked door.

“Yeah, gimme one sec,” I say. I throw my gloves, shoes, and helmet into a bag, grab my bike, and shuffle outside to his Jeep. One of my housemates is dead asleep in a red camping chair on the porch.

I’m sprinting up the first rocky climb after Rob Spreng. I feel pretty decent despite the lack of sleep. Todd Latocha shoots in front of me into the prologue descent, then dabs on a root ball and forces me and Birdley the Birdman off our bikes.

Rob floats away over the rocks, and disappears into the woods. I get around Todd, and drop into the Jump Trail. I pop over the rocks, drift through the loamy turns, and mash up the quick climbs. I really do feel pretty alright.

Over a big boulder, and into a split between two big rocks. My knuckle scrapes against the limestone wall. I roll off a short wooden ramp, juke around a tree, and smash through another rock garden.

A few miles later, I hit the first open climb in the course. It’s an old logging grade that’s narrowed into single track, and the closest thing to a road in the race. Birdley passes me with another guy in tow. I eat half of a cliff bar in one bite, and try to hang on.

Eventually they drop me on a section of flat trail. I just can’t spin quite fast enough to keep up. No biggie though. It’s a long race, and 4th overall is still a pretty good spot to be in.

Later in the lap, Todd catches back up to me. He rides a few hundred feet behind for a while, then we descend into the Little Cannan section. The trails narrow down to classic West Virginia raccoon path, and everything is tightly overgrown with mountain laurel. Todd’s squeaking brakes gradually fade behind me.

I finish the lap alone, grab half of a peanut butter and jelly at the start finish area, and roll back onto the course.

An hour later, I pass a sign for Swamp Trail. Great, I’m sure this’ll be fun. A few yards later, my wheels squish to a stop in a giant mud hole. Shit. I power out of the hole. Back into another. And another. I wind through the pines, over roots, then squish to a stop.

The course finally turns up the hill, and away from the swamp. But now it’s all soggy fresh cut trail. It feels like trying to ride on a line of sponges floating over a vat of cookie dough.

And it goes on and on for at least ten miles. My lower back is ready to explode. I can’t wait to get on some hard-packed trail.

When I finally get back into the rocks and off that sponge I’m so stoked. The guy that attacked Birdley way back in the first lap is stopped by the side of the trail.

Through the winding pine section, ripping around the soft banked corners. Down into some off-camber rocks, back up the ridge, then down a long skrumbly descent full of baseball-sized loose rocks.

Up the last climb. I know I’m close to the end now. I keep looking back. Nobody in sight. Just keep rolling smooth. You’ve got this one.

I sprint into the last downhill, jump off the last boulders, and spin up the grade to the finish. Done. Third overall, first single speed. I’m pumped. 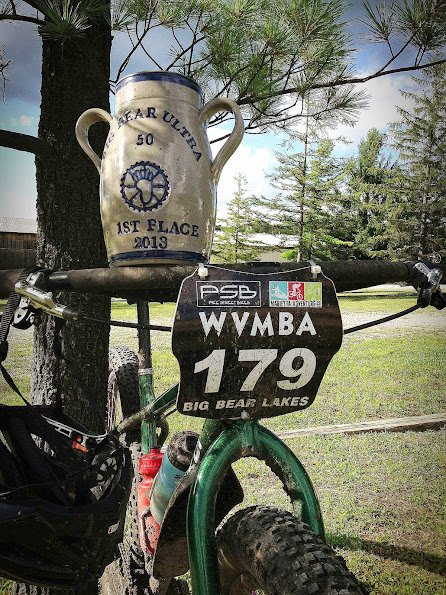 The Big Bear Ultra is one of my favorite courses. It’s hard, technical, and 50 miles of pure singletrack. Unlike most other endurance races, the race isn’t won on gravel roads. It’s a real mountain bike race from start to finish, and I wish there were more events out there like it.

I raced the single speed Surly Krampus with 29×3 inch tires that I just built up. It was pretty neat, and the bike I’ve been wishing for a long time. More thoughts on that later.