“Man, Colleen couldn’t you have picked a place farther up the hill?”

I’m doing the paper boy up the super steep street in Cat Ba Town, to the hotel Colleen picked which is like five feet below the very very top.

“You’re being super dramatic,” she says.

“No, I’m just telling you, please pick the highest highest place next time. I need to get my climbing in.”

We pull up to the hostel, there’s a guy sitting on the steps eating corn on the cob. He gives us a look that says I wish you’d burst into flames, then grudgingly lowers his corn cob.

Inside at the desk he gives us a key, then tells us that tomorrow we should rent kayaks, motorbikes, climbing equipment, and also go on the bar crawl. 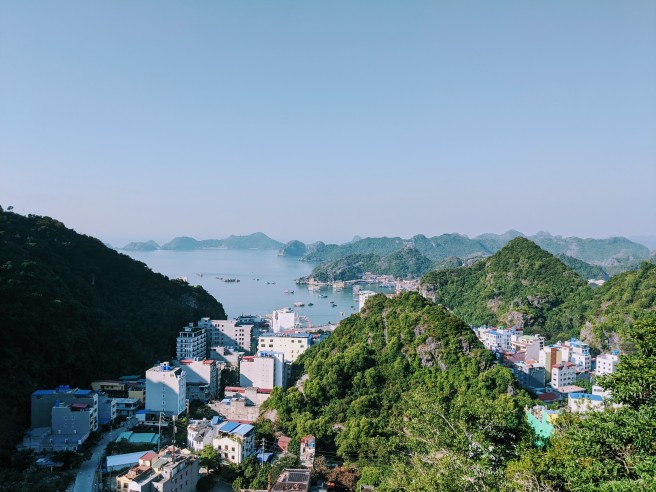 We trudge down the mountain to a restaurant called Fatty Bubba’s or something, and order some awesome Vietnamese food off a menu that’s in easy to understand English. They have nice cold home brew in a big frosty mug, and the beautiful turquoise Bay is right across the street. Is all of Vietnam this way? I sure hope so.

By this point I’m confident that I’m an expert in the restaurant scene- street places use kid’s size plastic chairs, fancy places use adult size wooden chairs. Food is about the same, but double the size of the chair, double the price of the meal. I think a big size chair is worth the extra two bucks.

After lunch we walk around a little, there are some big 15 story hotels, a market that sells a bunch of niknaks and the North Face gear that everyone has. Puffy coats are like 400,000 dong ($17), and maybe the materials are cheaper, but the stitching and everything is about as nice as the real thing. 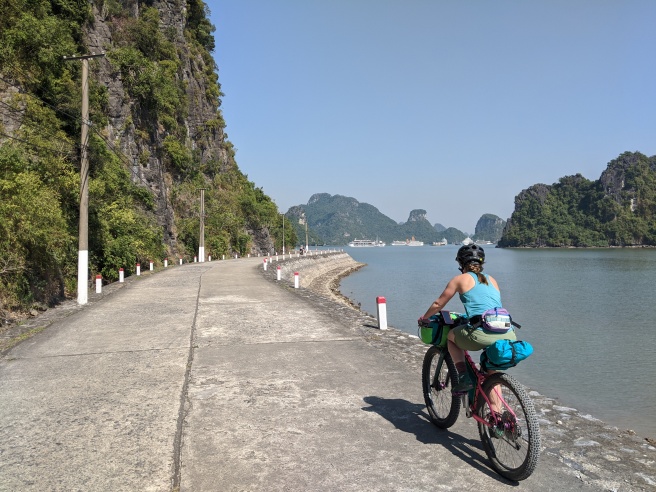 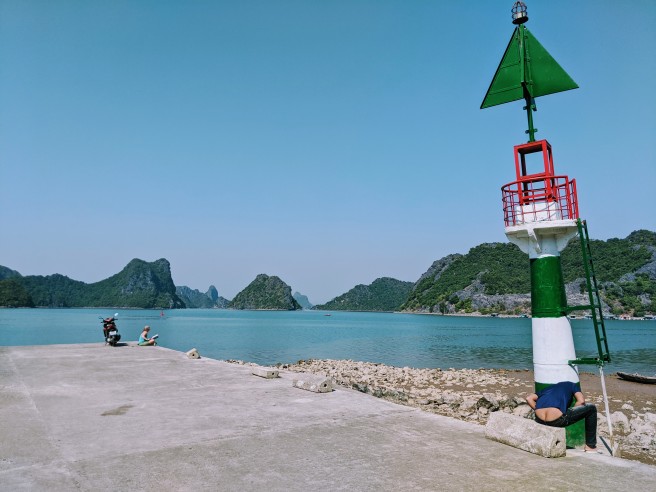 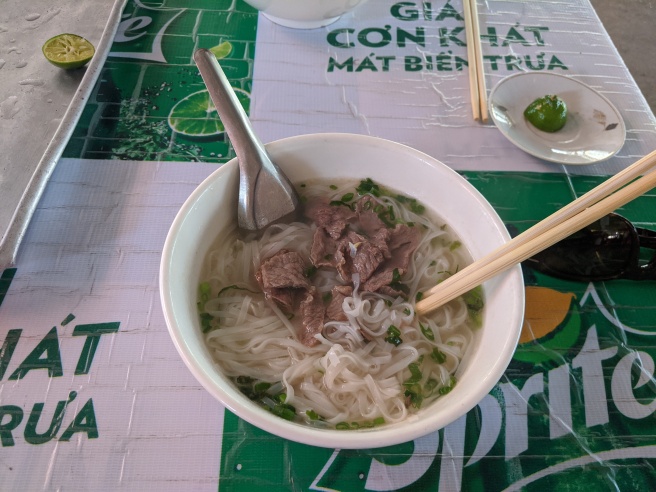 Next day we ride back across the island, a real pleasant traffic free cruise. Pay for the ferry, then kill an hour or so with some pho and a couple beers.

Pho, which is a pretty basic rice noodle soup usually with a little beef, is pronounced faa. And when I say “faa” to try to order some pho, people look at me like I’m deranged. Then they say “Faa?”, I nod vigorously, yes please, then they ladel some out.

No clue how I’m pronouncing it so wrong, but the nuances of a tonal language are completely and totally lost on me.

Growing up, I didn’t think I had an accent. Everybody probably thinks that, because you sound like everyone at home. But I realize now that I do have an accent, and it’s a flat, unexpessive, and unexcited one. A little monotone, which doesn’t lend itself to a language that’s all tones. So I’m hopeless. 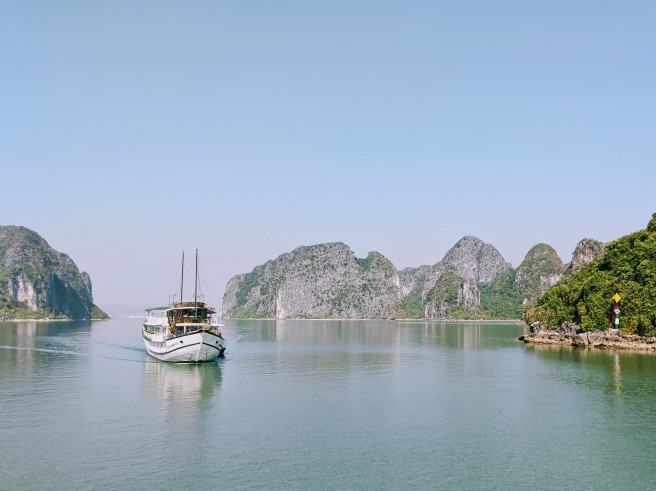 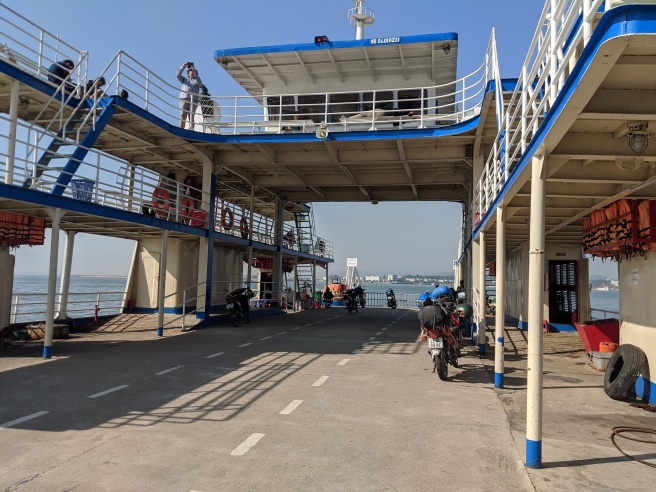 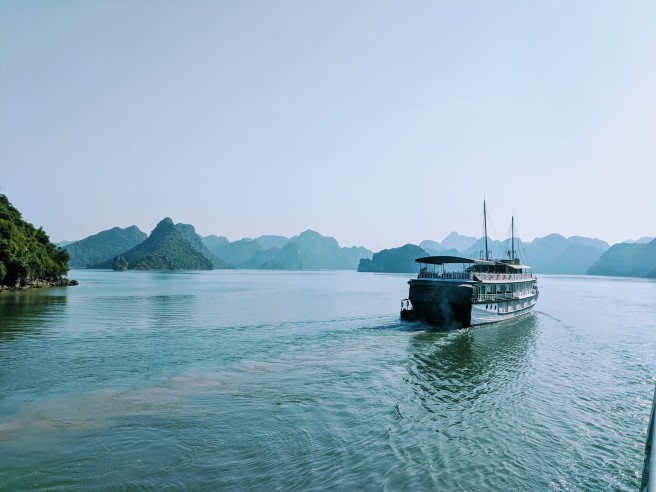 The ferry across Ha Long Bay is like five bucks, and crazy beautiful. Giant limestone lumps in turquoise water.

We land on Tuan Chau island on the other side of the bay, which is strangely empty. There’s an abandoned amusement park, and a new park under construction. We get a room in this beautiful, but also weirdly abandoned luxury villa thing for 20 bucks, then go find some more pho.

I do a little more looking around to find out what’s going on with this place, and turns out it was featured in the first season of No Reservations with Anthony Bourdain back in 2005. The place was just as strange and deserted back then. Here’s the episode: The Island of Mr. Sang. And man, the first season of that show is hokey. 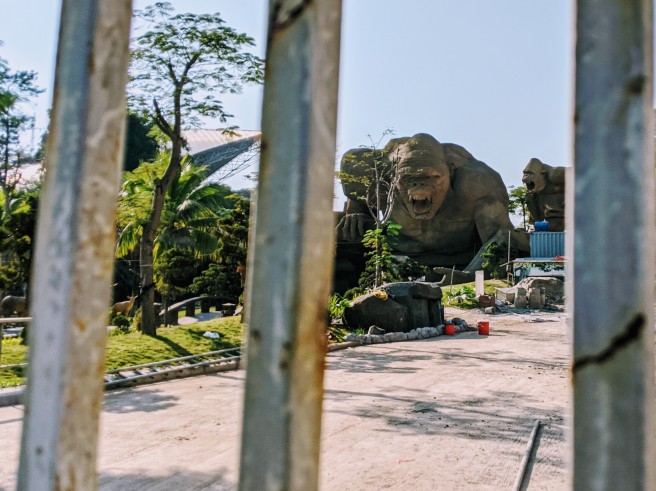 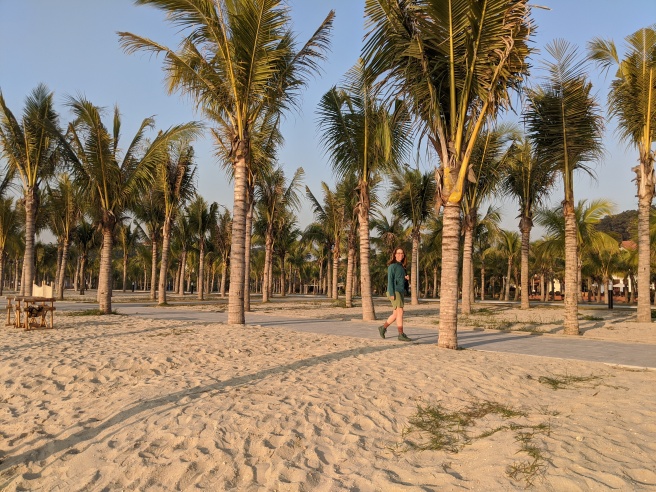 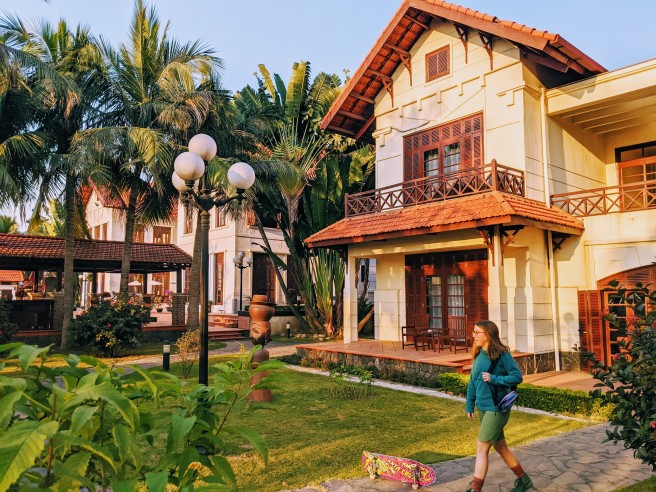 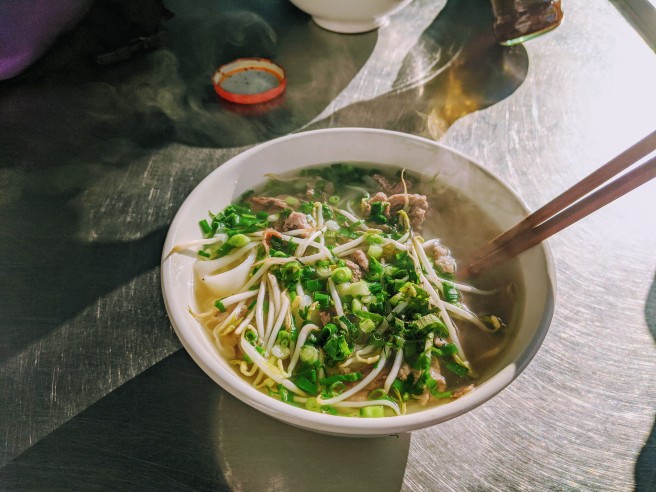 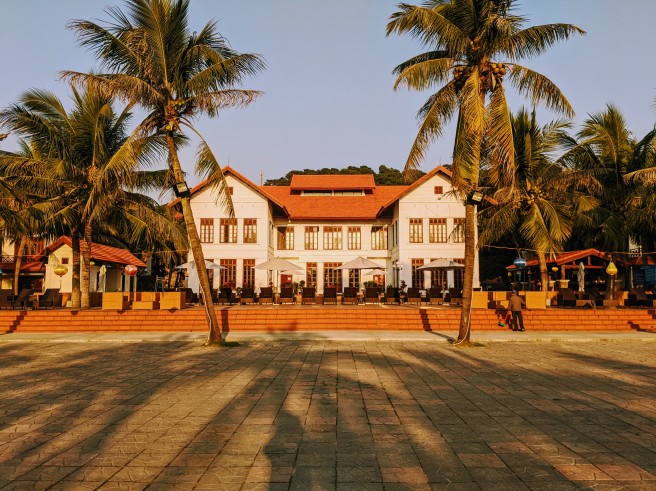 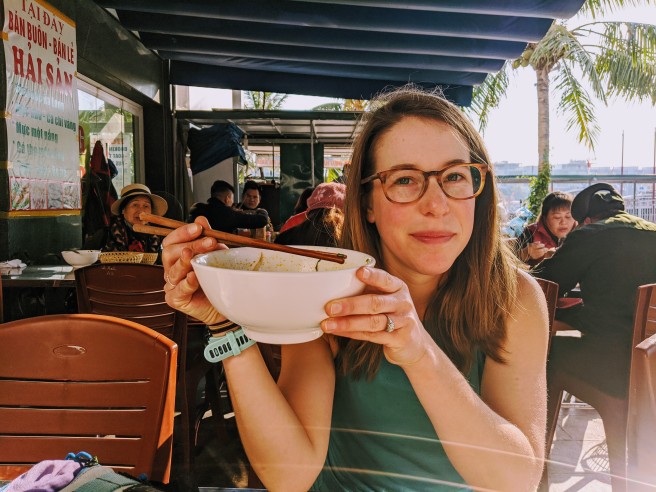 The next day we get our first rolling hills, then end up in the village of An Chau. When we go out to find some dinner, we realize immediately that we’re not actually experts on the Vietnamese restaurant scene.

My little rule about chairs and plastic stools doesn’t hold, because in this town there are no chairs. Or restaurants. Very few little stools, and nobody seems to be eating. We walk around dejected, hungry and confused for a while, until we finally find a place on a side street with some awesome bun dau. 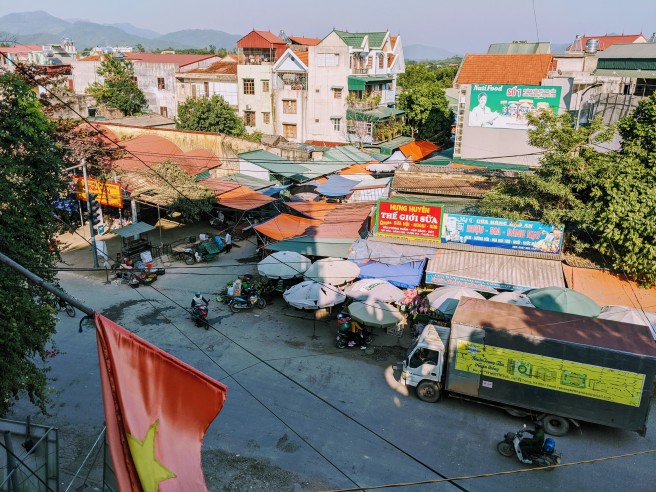 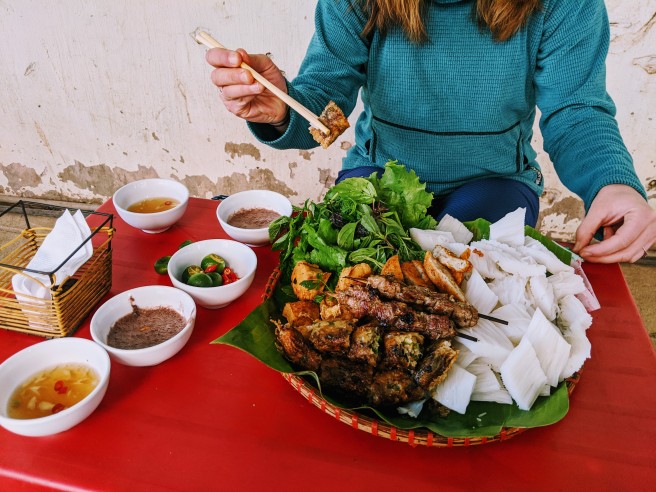 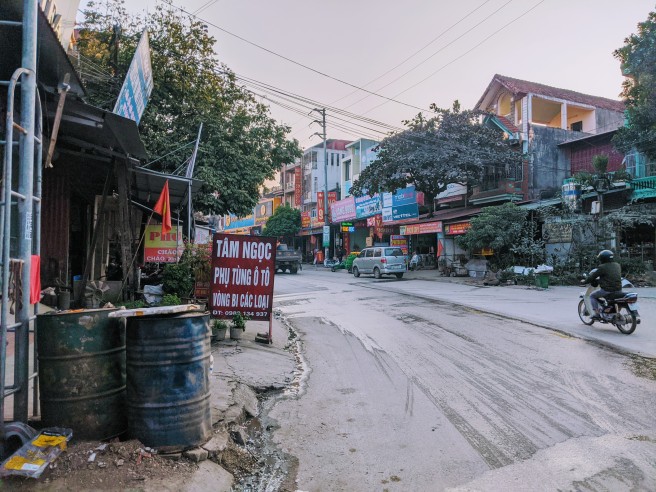 The next morning, Colleen buys some mystery blocks of food wrapped in banana leaves. The old lady selling them is kinda making gestures that seem to say “are you sure you want that?”, but Colleen gets them anyway, assuming they’re some kind of sticky rice cake.

50k away in the next town, all the restaurants on the square are dog restaurants. Cho, cho, cho, nothing but cho. Dog is some of the most expensive meat here, and people love it. And although I’ve met some asshole dogs that I theoretically would love to turn into soup, when it comes down to it I don’t actually want to eat a dog.

So we’re stuck with the backup rice cakes. Which turn out to be inedible, and I understand now why the market lady kind of didn’t want to sell them. They’ve got the texture of hot tar, the flavor of rotten seaweed, and are stuffed full of sickly sweet yams.

Can’t eat it. I pride myself on trying anything once, but Vietnam is breaking me. Some this stuff is just so far outside of what my palette is used to. 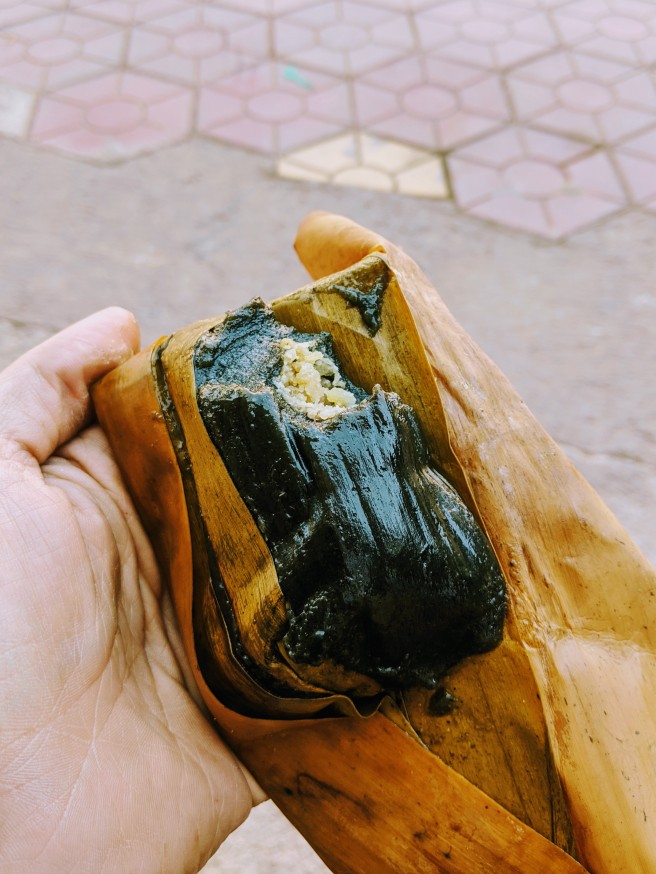 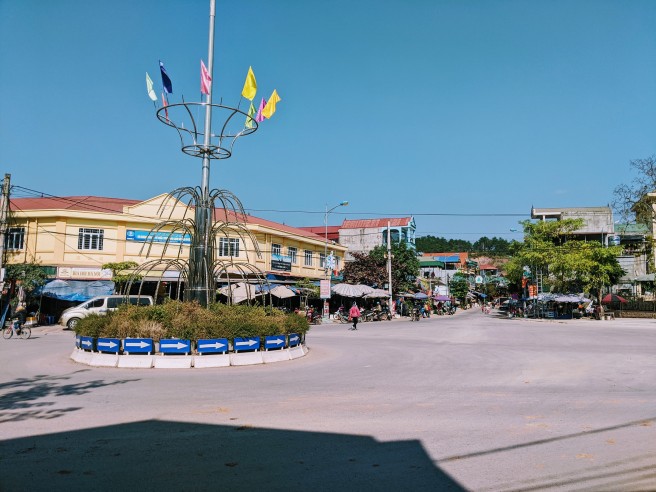 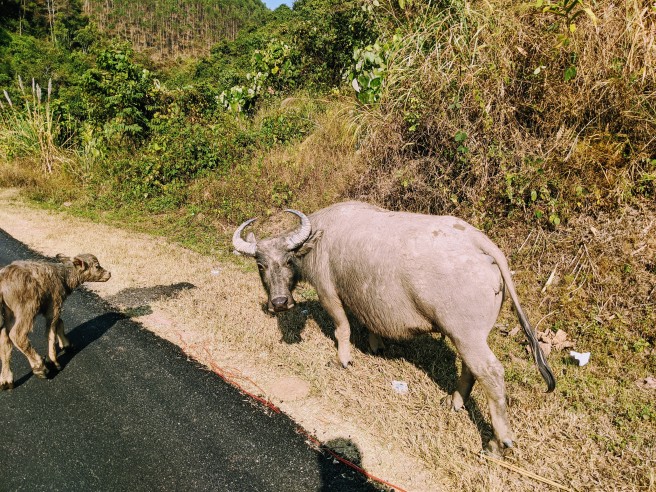 That night we end up in a bigger industrial town, and again have some dinner trouble. The street we’re staying on is a few blocks long, and seems to be nothing but oc lau, snail hotpot. Dozens of restaurants all serving the same thing, called the same thing. Oc lau, oc lau, oc lau. Hot pot is like a celebratory meal, pretty expensive and not really regular dinner. And after our experience with the baby buffalo liver last week, the hot pots and us need some time apart.

So we keep walking. And end up on the coffee shop street, nothing but cafes. No food there.Finally find a street stall, where it looks like the lady serves some rice dishes. Sit down, start trying to say something, and before we can get it out she plops down some bowls of pho. Pho it is. 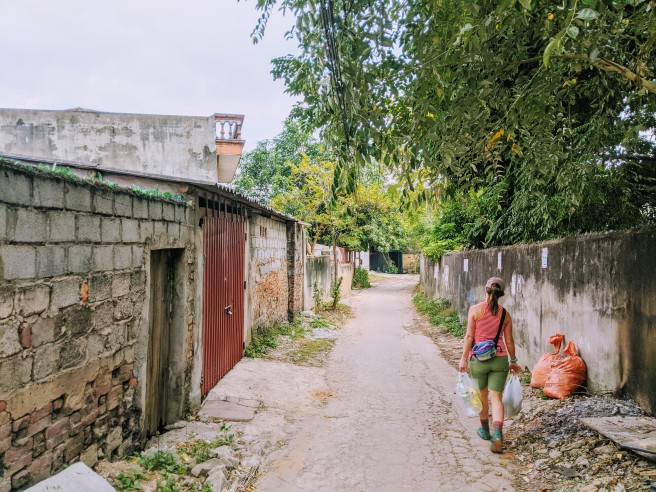 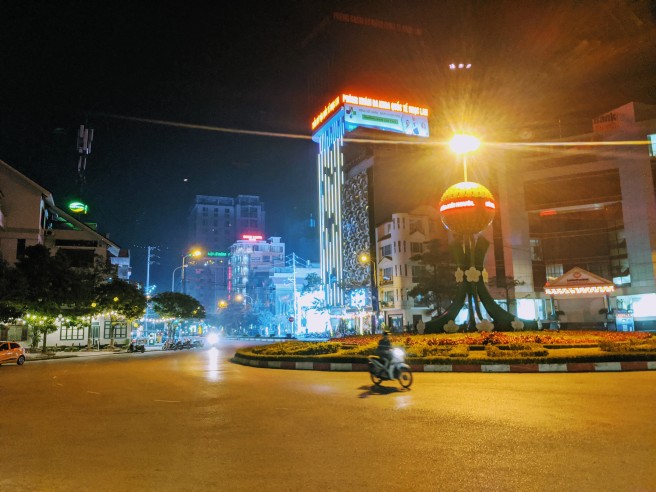 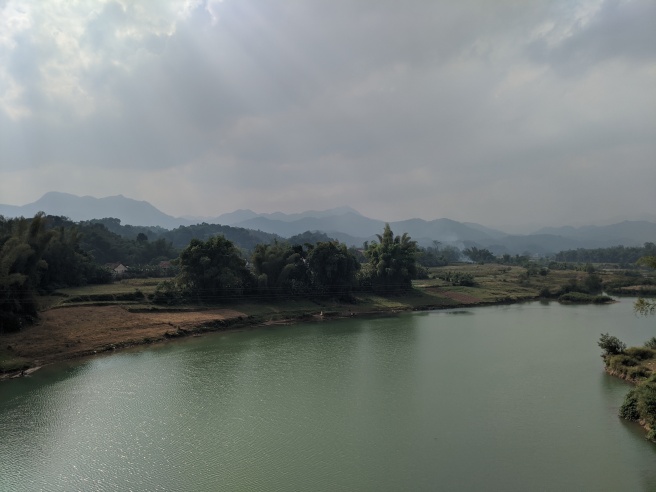 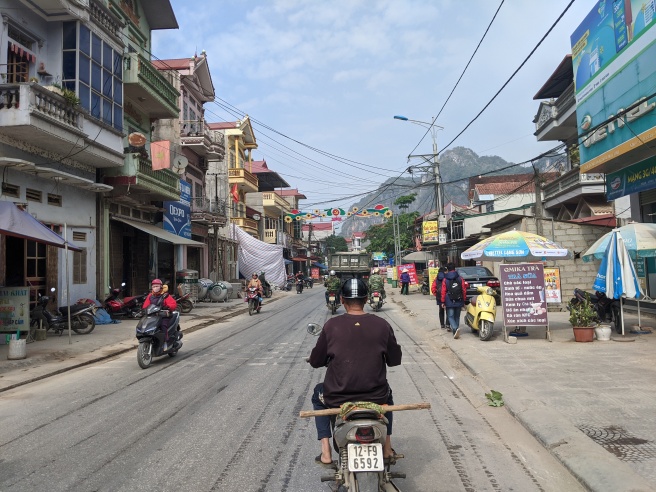 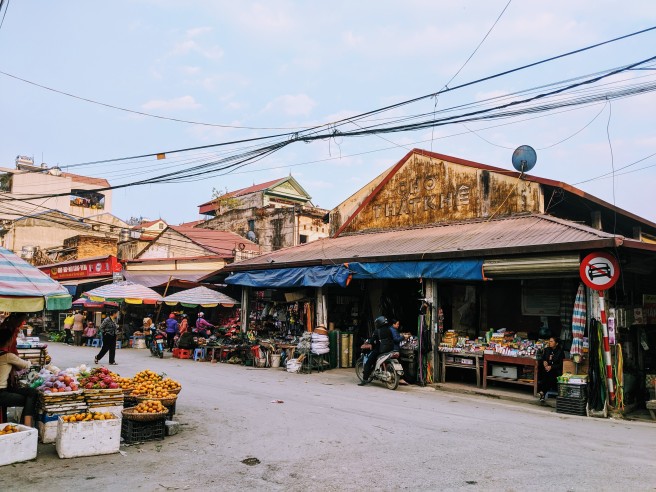 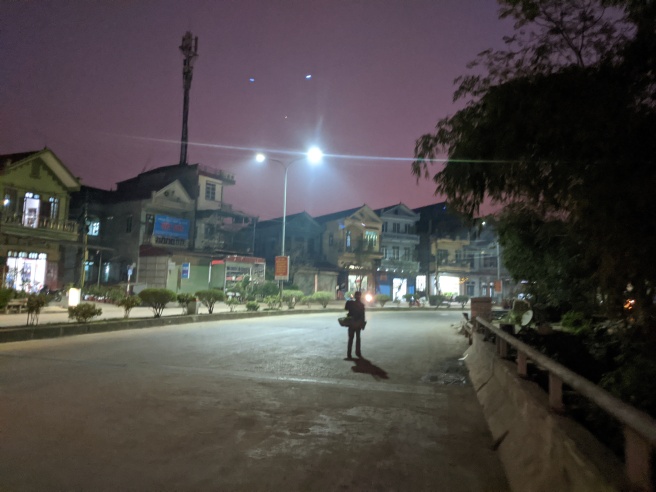 Couple more days on the road, then we take a day off in Cao Bang, where there’s a nice guesthouse owned by a Vietnamese couple that also run an English school in town. Big family dinner, which is like six different dishes in little bowls. Fill your bowl with rice, then grab the other food with chopsticks, put it in your rice and eat.

There’s fish, and chicken, and some sort of banana thing, and a pork thing and it’s all really good and much more filling than pho. We’re quite pleased.

Do a little skating the next day in the big town plaza, and after a while have an audience of about ten dudes on their lunch break, clapping and giving me a thumbs up everytime I land try a crappy trick.

I finally convince Colleen to try rolling around a little. She starts giggling.

“This actually is pretty fun!” she says, then refuses to give my skateboard back 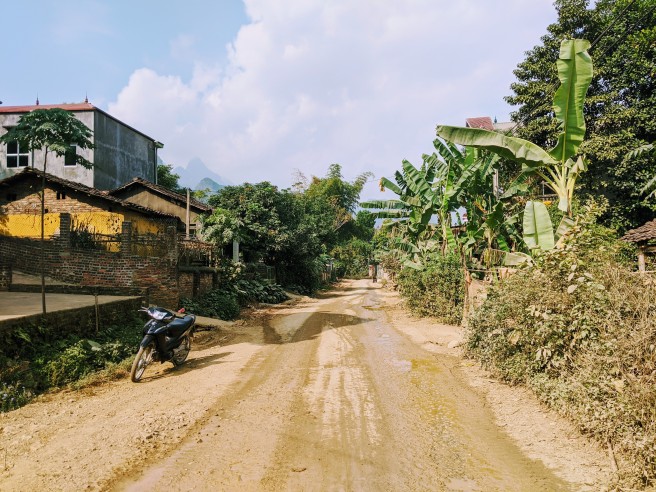 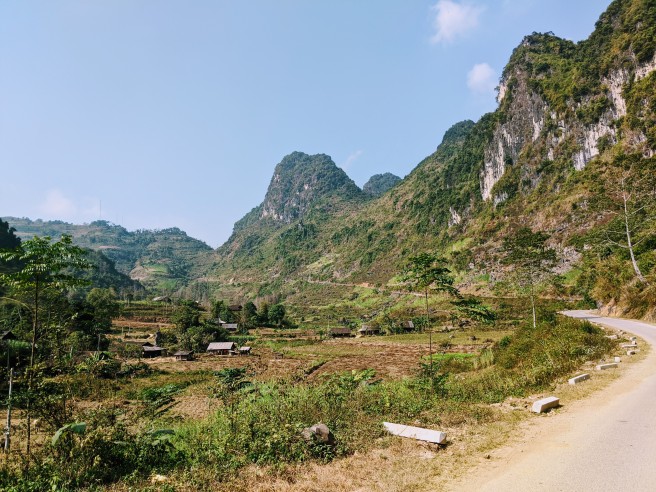 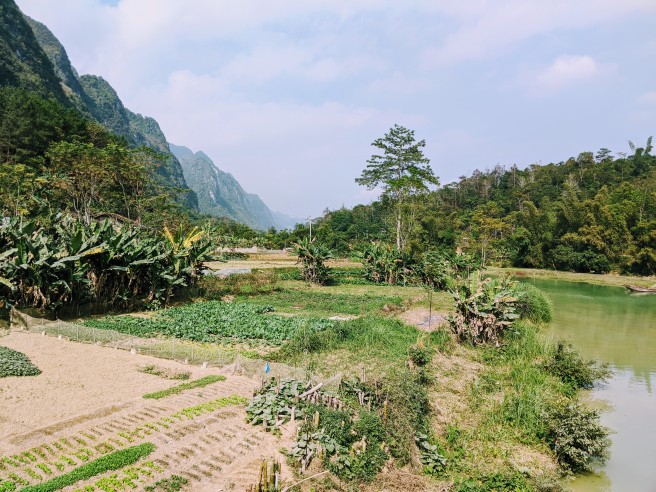 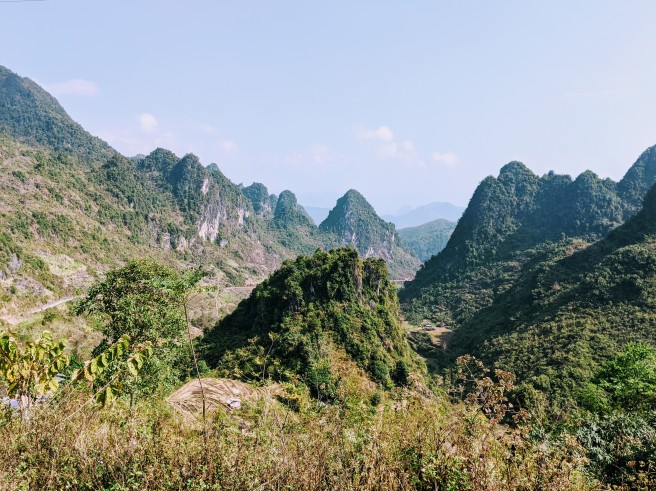 The next day we plan on riding 100k, but the climbing turns out to be so beefy that by 2:00 we’ve only covered 50k. I realize we’re not going to make it to the next town before dark (sunset is at 5:00), so we’ll have to stay in this town.

As usual, finding a hotel is super easy. The guy that owns the place shows us the room, then opens the frosted windows to show off a nice view of the mountains. He types into Google translate on his phone, then shows it to me.

We laugh and give him a thumbs up, yes, we foreigners do like the nature.