“Try, try it, this for you,” says an old lady with a cone hat. She pushes a little donut into my hand before I know what’s happening. Colleen and I were just walking down some busy side street in Hanoi, scooter horns and buzzy exhausts.

She immediately starts filling up a bag with donuts.

“Oh, no, that’s ok,” I say. She completely ignores me. “Really that’s enough.” She finishes filling the bag and hands it to me.

“Uh, ok.” I hand her the money. I have no clue what a bag of donuts should cost, but I’ve got a strong suspicion that I’ve just been played.

I try to convince myself that 80,000 dong is a reasonable price for donuts, but after walking around a while longer, it’s obvious that I’m a sucker.

80,000 is what a decent dinner in a restaurant should cost, or it’ll get you dinner for two on a little street stool.

I’m pretty susceptible to this kind of thing, if somebody talks to me on the street, I’ll always stop for the conversation. I like it. And I have no problem walking away from a slimy aggressive dude, like all the motorbike taxi guys, but I can’t be rude to a little old lady. Because I’m a small town boy (and a sucker).

So I expected to be taken advantage of here. Whatever, it only cost me three bucks.

So next time I see a donut lady I’ll probably be out another three bucks. 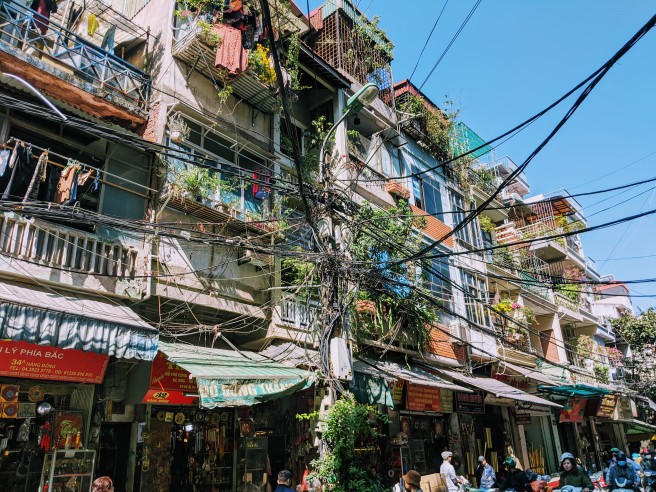 We spend a couple days walking around Hanoi and trying to get our bearings. We’re staying in a nice hostel, with eggs and bahn mi (which is a softer shorter baggette), there’s delicious street food everywhere. I wonder if all of Vietnam is going to be like this, and I sure hope so. After two days, we’re convinced it’s not possible to find bad Vietnamese food (donuts excluded).

In the Old Quarter, every street has its thing. There’s a sheet metal fabrication street, upholstery street, tailor street. Other streets are just fabric, or keys, or water pumps, or lightbulbs. 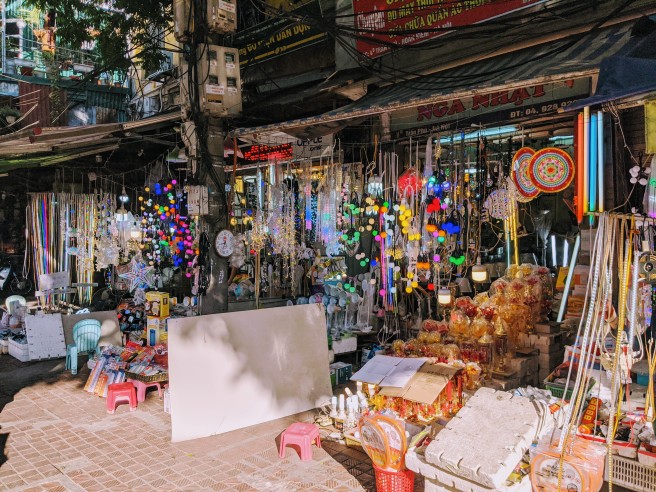 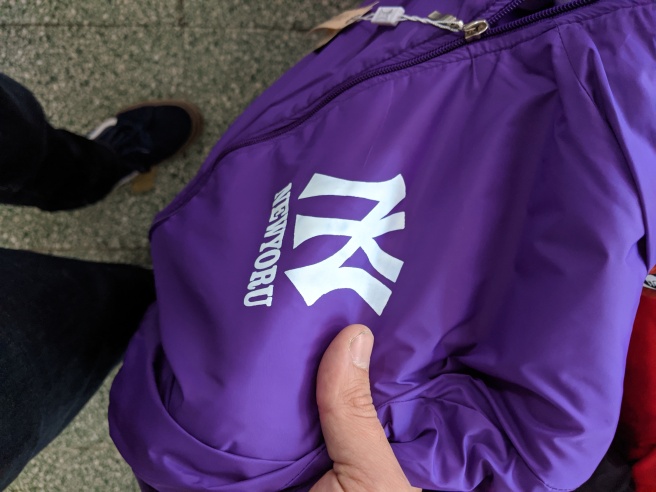 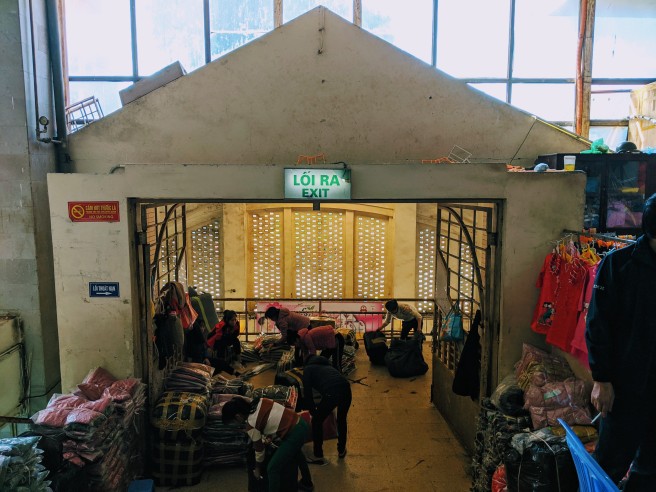 Also fun, this is the first time in my life I’ve been a tall person. Even Colleen at 5’2″, looks like a tall girl.

We go to the Hoa Lo (Hanoi Hilton) prison, and the Vietnamese Military History Museum. Both places are heavy on the propaganda-style language, with lots of glorious victories and American Imperialist failures and so on.

At the Hoa Lo Prison, where John McCain and other pilots were kept after being shot down, there’s an exhibit about how the world stood with Vietnam against the Americans with a big section devoted to anti-war protests at home. Other exhibits explain how American pilots had a nice time in the prison, playing basketball and eating Christmas dinners. 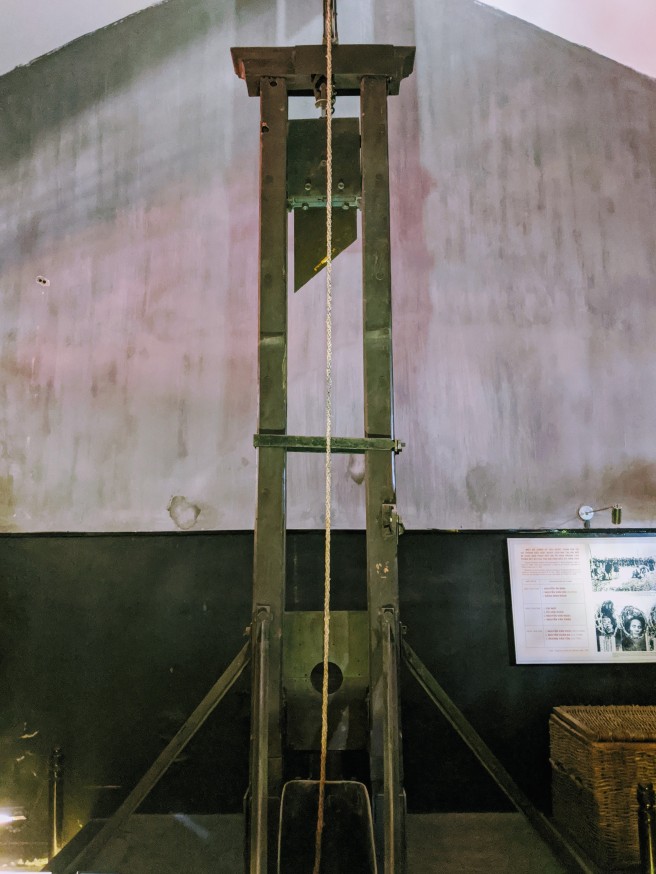 The prison was originally French, and was equipped with the finest Parisian neck trimming equipment. The French were using this thing on Vietnamese prisoners and displaying the heads on sticks well into the 1900s. 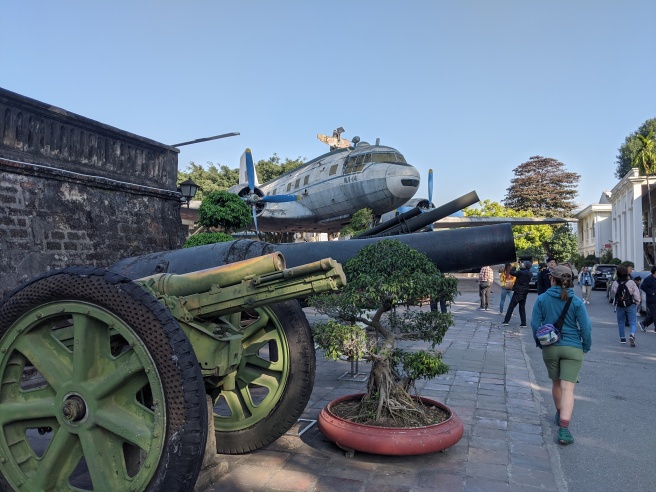 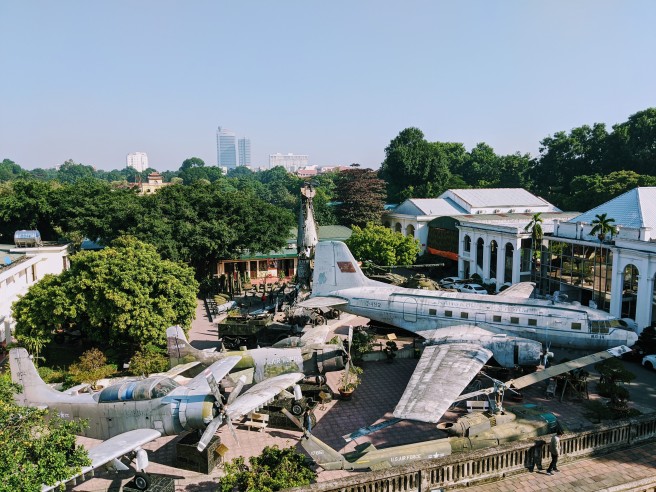 At the Military History museum, they have a bunch of captured and destroyed hardware.

And this memorial, made of American bombers shot down by the People’s Army. They’re proud as can be of it.

And it’s weird as hell to stand in front of. Guys died in there.

So terrible things happened, but enough on that. Let’s hit the road.

Riding out of town is every bit as insane as riding in, sprinting to merge into roundabouts, keeping with the flow of traffic.

As usual, I’m so glad we’re not on heavy touring bikes, it’d be an adventure to try to maneuver one of those things in this mess. We hit some scooter paths, then a big highway. The highway is loud and sooty, but it’s fine to ride on. The whole right lane is for bikes and scooters. 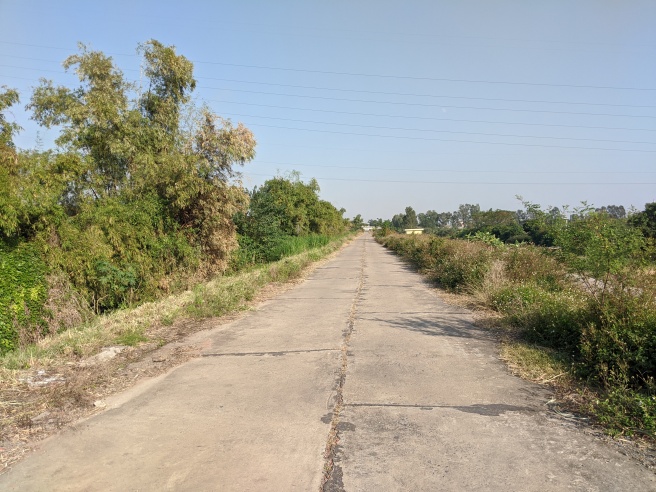 Then we’re off on some scooter side road through the fields, take a ferry across the river, then pedal on down the road to Hai Duong.

Hai Duang is a big industrial town, and we find a room at a nice businessman’s hotel. The girl at the desk speaks perfect English and is super excited to tell us stuff.

“Have you had hot pot? Hot pot? With the baby buffalo? It is famous in Hai Duang,” she says.

“You would eat? Really? The buffalo?”

“Yeah, we eat meat.” We’re both thinking it’s just going to be like buffalo steak or something. Doesn’t sound that weird.

She very excitedly walks us down the street to a restaurant, talks to the guy and orders us a buffalo hot pot.

The guy sets up an electric hot plate, pot full of broth, then starts bringing out various raw meats. We gather that we’re supposed to let the broth boil then cook the meat in there.

Upon closer inspection, we realize that we don’t really have any buffalo steaks. What we’ve got is various organs and stomach parts.

I try my best with the boiled liver or whatever the porous greenish-brown jiggly bit is, but to my palate, it’s gnarly. No other way to put it.

I try the liver again because I hate to waste, and everyone else in the restaurant is clearly loving their food.

I can’t do it. I’ll try any food, but this is just off. We’re quickly hit with the fact that not all Vietnamese food is good, and suspect that maybe the reason everything was great in the Old Quarter was that they only serve the stuff that goes over well with tourists. 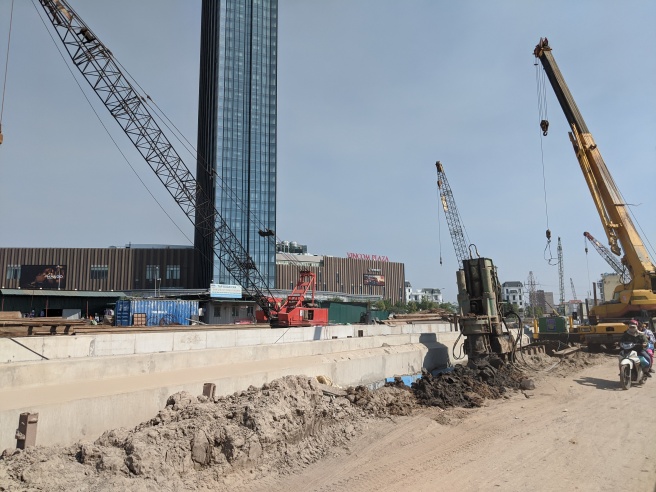 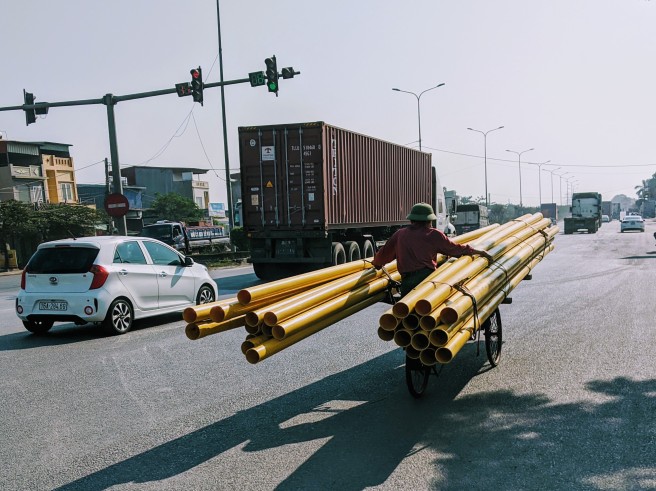 We get to the big city of Hai Phong the next day. We’re still in the huge Red River Delta, so everything is dead flat.

There’s frantic construction all over the place. 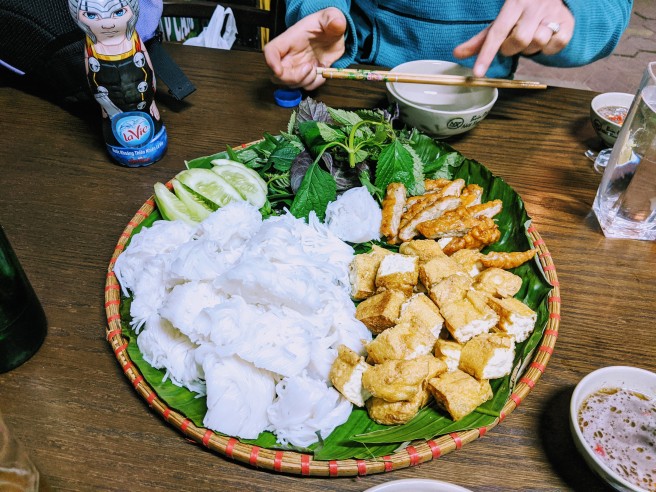 We meet another new food, bun dau. This one is a big plate of tofu, fried pork, and rice noodles on a banana leaf, served with this tangy fermented shrimp sauce. I’ve never tasted anything like the shrimp sauce, it’s kinda got weird unique flavor like Marmite or Vegimite, but it’s good.

Our lodging for the evening is supposedly a hostel, but turns out to be a room in somebody’s house. The matress feels like a board, bars and barbed wire on the window, and a naked lightbulb. It’s fine, we’re just sleeping here.

We go to bed. Then the karaoke starts. These two that live here, singing this song that sounds like it should be on the Mulan soundtrack. Over and over and over. The woman thinks she has a voice like an angel, but is completely tone deaf. Good God, please shut up. I feel like I’m going be stuck in this Mulan loop forever. Finally, an hour later, they give it up.

The next morning, construction starts next door at five in the morning. Also fine, we wanted to get going early.

We go downstairs to get the bikes out of the living room/scooter parking area, and steel garage door is shut. All the houses in cities seem to have these doors, they roll shut over top of the glass front doors.

I walk over to hit the opener, nothing. Look for a way to manually unlock it, nothing. Try all the other buttons and switches in the room, nada.

Now I’m starting to feel a little trapped, and like an idiot for not being able to open this door. There’s no other way out of here. We sit and fume for a while, hitting various combinations of buttons. By then it’s close to seven, so we call the woman that owns the place. No answer, call again. She finally wakes up and comes down with a garage door opener.

So we’re not idiots, she just had the only opener. Totally not comfortable with being locked in like that.

We ride though some heavy industry and past the port on the edge of town. There are some seriously good fumes here, you can feel light-headed all day just breathing on the free air.

Then we take a ferry over to Cat Ba island, and get our first taste of some quiet, hilly riding. It’s really nice.