“They’s all meat sheep now,” says Will. He’s a pot bellied bloke with a stubbly face, and is wearing a t-shirt with a screaming, flaming, ghastly ghost skull on it. Spooky! We’re sitting at the Wimbledon Tavern, an old little pub at the bottom of a steep green valley.

“Meat sheep?” I think of the thousands of adorable little fluffy sheeps we’ve ridden past, which I thought we’re just destined for a shearing. Then of all the mince pies I’ve eaten. Pies full of adorable meat sheep. Almost makes me want to be a vegetarian.

“Yeah, wool’s not worth nothing. Back in me dad’s day was all wool sheep, now we got to do the meat sheep.” He tips back his 750ml big bottle of Speights, puts a gold coin and a fiver down for another one. 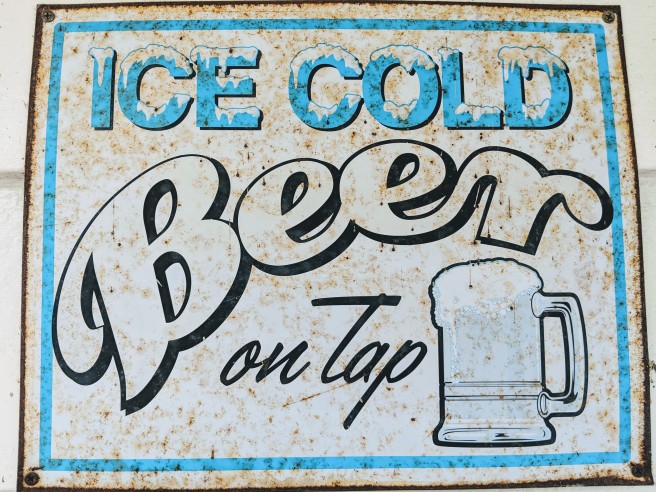 The campsite at the pub was free, but after the fish and chips, a few beers, and a glass of wine for Colleen- we paid for it. The house always wins.

That was actually one of the few times we’ve gone out for dinner. We do eat out a fair amount, but always lunch. Take away lunch places are super reasonable- fish and chips is 7-10 NZD, super good Indian or Thai is 10 or 12, and sushi bento boxes are the same. But at dinner, even in a pub, mediocre fish and chips can be 22 to 26 bux.

The rest of the ride down highway 50 is quiet, rolling, full of sheep and green fields. It might be the quietest road in New Zealand, we’re only passed by one or two cars all day. 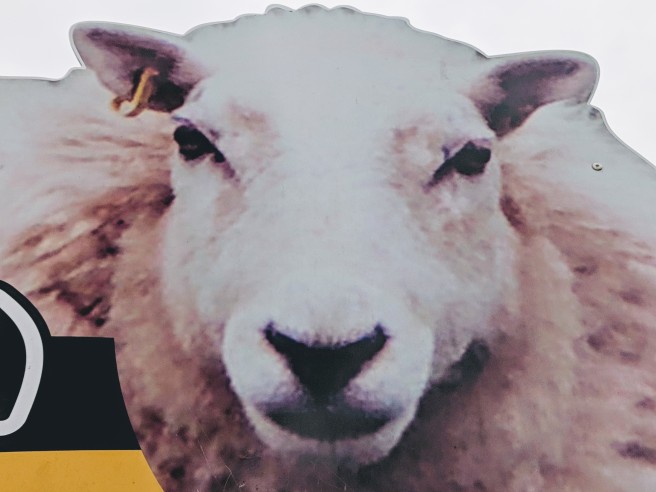 A couple days later we make it into Masterton, which is about 60 miles from Wellington, the capital city, where we’re getting the ferry over to the South Island.

The next day is nasty- cold, rain, super strong headwind. So we hop on the commuter train and we’re in the city in about an hour. 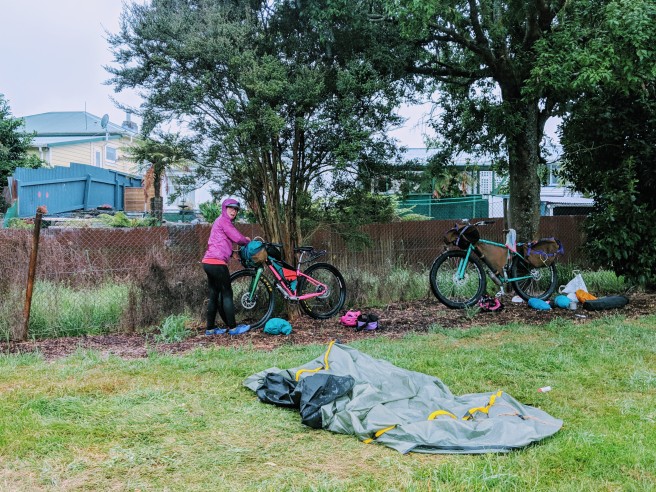 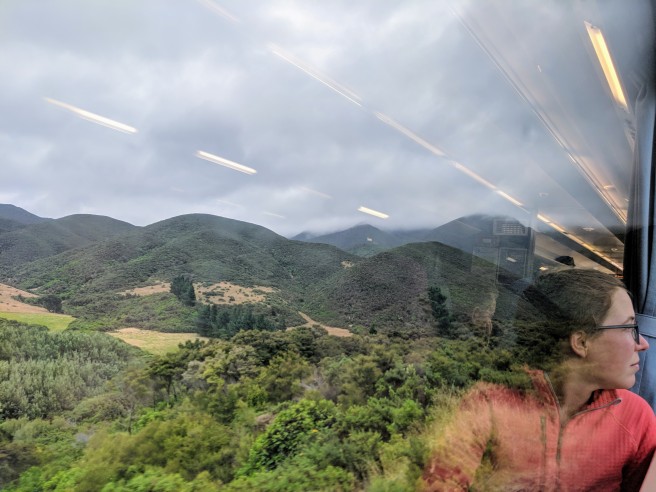 Colleen got in touch with Ismene and Hugh on Warmshowers, and they let us spend three nights at their place, and Ismene made an awesome dinner every night. It was great to hang out with those guys- they’re like bike tour super hosts.

Wellington is world famous in New Zealand for bad weather- strong southerly winds blow up from the Cook Straight (it’s the closest city to Antarctica on the North Island in the world in New Zealand), hitting the city in with ripping wind and cold rain.

But for most of the time we’re there, it’s beautiful and sunny. And what a nice city. Most houses are perched on the sides of the steep hills, so almost all of them have a good view. There’s great riding right in town (Hugh’s bike commute is almost all singletrack), great beer at the Garage Project Brewery, tons of good bike shops, and that beautiful harbor. It’s definitely one of those places I could imagine living.

Top of the town trails:

This book store was not at the top of the town trails:

Colleen is about 40 percent of the way down from the top of the town trails:

Kiwi Velo in town special orders a new cog, which only takes two days to come in. I’m switching from a 32×20 to a 32×21. I borrow a few of Hugh’s tools to change the gear out.

I’m bent over my bike, and a bird screeches overhead. Was that a parrot?

“Was that a parrot?” I ask Hugh, who’s coming up the steps. He looks to the sky.

“Oh, yees. Kaka have been doing quite well in Zelandia. They’ve begun nesting outside of the fence.” Zealandia is a sanctuary for native birds right in the city, surrounded by a tall predator-proof fence to keep out the invasive stoats, possums, and weasels that have decimated populations without natural defences to mammalian predators. The kakas are big and brownish red, another one screeches. They seem so out of place in a city like this, but I guess it’s technically the city that’s out of place.

Not a Kaka, but my finest wildlife photo. 100 percent of the way down from the top of the town trails:

The fence line trail outside of Zealandia:

One thought on “Napier to Wellington”