It’s raining in Rotorua. Which is just fine, because we’re happy and dry in a house.

“You guys could probably jump on a trip today,” says our friend Dicky. The raft trips are quick, only 30 minutes or something down the Kaituna River. We went a couple years ago, and the river is gorgeous- blue water, ferns, deep volcanic pools, and a 20-foot waterfall. But it’s cold and rainy, and I’m a sunny day only rafter.

Nicky and Dicky head to the river, and we go out in the backyard and work on Colleen’s bunny hop skills in between rain storms. She really starts to make progress. It takes some practice to do right, and not just jerk up on the pedals.

I get an Instagram message from Nicky later that day- she got worked by the waterfall, sucked down to the bottom and spun around, maybe blew her eardrums and is going to have to stay in the hospital overnight to get checked out.

We head out the next day. Nicky ends up being prescribed about a week of quiet time, but is ok otherwise. Still, whitewater is scary.

There’s some really nice dirt road riding around the back side of Lake Rotoiti, then we drop down to the beach at Matata, where there’s a Department of Conservation campsite.

Naively, we think it won’t be that busy because it’s kind of in the middle of nowhere. But it’s a day before New Year’s Eve, and going to the beach on the holidays is a tradition for lots of Kiwis.

We’re able to get a spot, but it’s absolutely nuts. The campground is jammed full of vans, RVs, and these giant canvas tents that look like they were stolen from the Carnival of Sadness and Festival of Nautical Stripes 58 years ago, then left up for a month each year to bleach in the extra-super-ultra violet rays of NZ’s sun.

I hope I don’t offend anyone who owns one of these tents- I’m sure they have many great family memories about the clowns they’ve sacrificed under those sinister mouldy roofs (ripping the beating heart out of a clown and feeding it to the family wood pigeon in place of a plum is thought to bring a family good fortune for the coming year).

I bang out little tent stakes into the hard dirt while an old guy across the way stares at me, presumably plotting a way to drag me into his saggy evil tent.

The wind swings around, blowing the sweet smells of our neighbor’s open poop suitcase our way.

Maybe you’ve never seen a poop suitcase- it’s like rolling luggage that you attach to your RV via a corrugated hose, fill with poop, then drag over to a sewer in the morning because you’d prefer to wheel around a poop suitcase rather than walk to the campground’s very clean, normal, flushing toilets.

The beach is pretty though.

About 100 miles of road riding to Opotiki, with a side trip up a steep hiking trail right after lunch, which Colleen isn’t thrilled about. But it’s a two-mile singletrack opportunity, it’d be a sin to skip it.

Next day we start the Motu Road, which is a pretty straightforward gravel ride. Nice weather, good campsite, a helicopter flying away with two deer dangling by their necks from a rope. The usual NZ bush stuff. 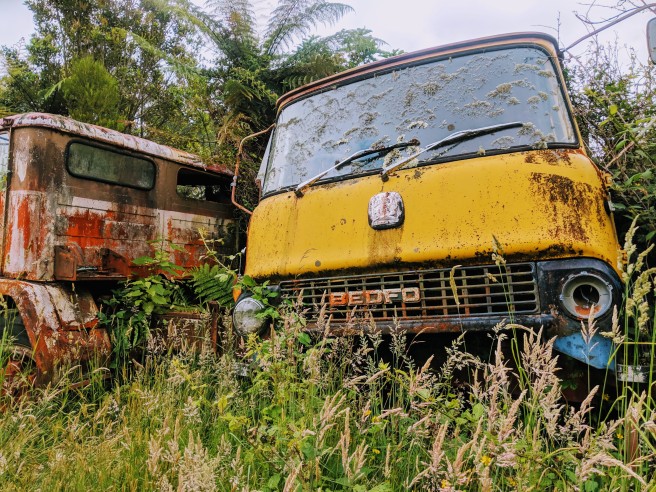 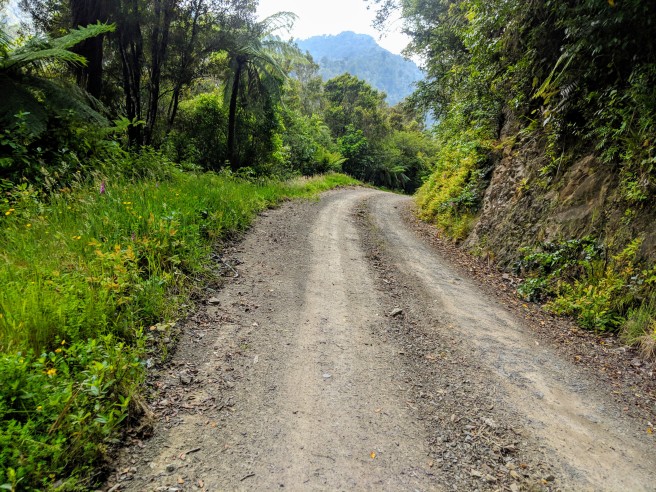 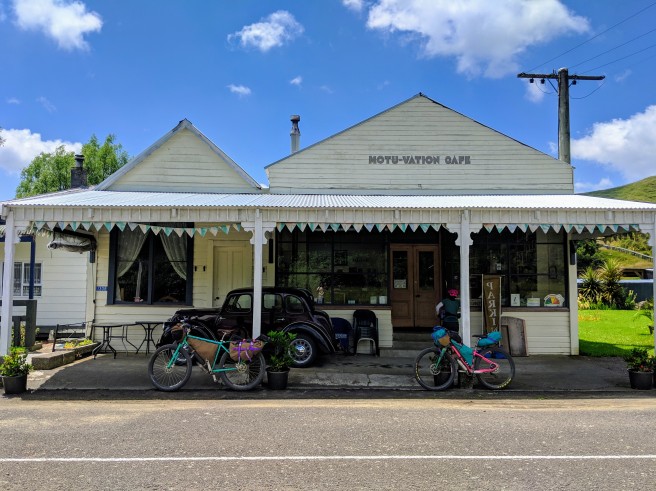 I catch some waka ama racing in Gisborne. Waka is the Maori word for canoe, waka ama is a canoe with an outrigger, a design more common on other Polynesian islands. Maori didn’t typically use outriggers since the trees in New Zealand were big enough to carve a stable single-hull boat.

It’s pretty cool, there are as many women racing as men, lots of kids out paddling, and a neat cultural connection- Polynesian people made some of the most impressive ocean voyages in human history. It’s hard to imagine, navigating thousands of miles of open ocean via stars and memory (not even a compass, let alone a sextant). Here’s a cool article if you’re into that kinda thing: On Wayfinding, Nainoa Thomoson.

But it’s obviously a thing that takes some practice even if you’re Maori- the kids keep getting their outrigger stuck on the pylon at the turnaround point.

4 thoughts on “Rotorua to Gisborne”