The road is one of those impossibly steep ones, the kind where you’d shift a car into first gear to try to creep down, but it’s still too steep so the by the time you’re at the bottom the brake warbles and smells like shoes that were supposed to be drying by the campfire, but instead the rubber on one side started to melt while the other side just got kinda warm but stayed damp. 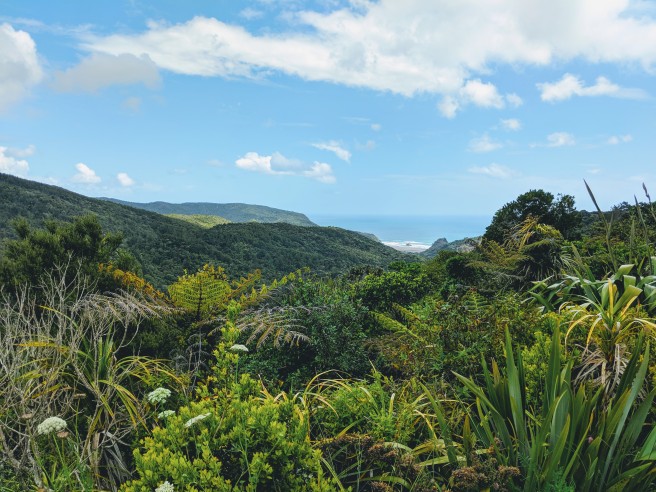 I’m standing, barely getting the pedals to turn over, stomp. Stomp. Colleen spins past in her 32×48. I yank on the handlebars. Something pops or kinda snaps in my back. Oof. Better chill out a little. I dismount and walk. Rough slimy chip seal, sweat, heavy breathing ferns. This is day two of the tour, on Colleen’s Hills from Hell Route. Somehow she managed to find all the steepest shit around Auckland, and sold it as a warm-up route.

The airline got both of our bikes to the country at the same time (two years ago, Colleen’s was MIA for three days) so we were able to build them at the airport and ride the 20 miles into Auckland, the Super City- which I think is officially called the Super City because it’s one of those metro areas where a few smaller cities glommed together and got rolled into one.

Unofficially, a lot of people that I’ve talked to out in the country seem to think of it as the Super City because it’s the Biggest Place in New Zealand. And the Most Horrible Place in New Zealand, home of the urban nightmare, not the real New Zealand mate. Real New Zealand is little pubs and sheep. Or fishing and wakas (canoes). But to my eye, it’s a medium size city, like Pittsburgh sized with a San Francisco feel (only with much better weather), lots of nice restaurants a beautiful harbour, and some very pleasant and affordable hostels. Also it’s in New Zealand and not fake, so it must be real. 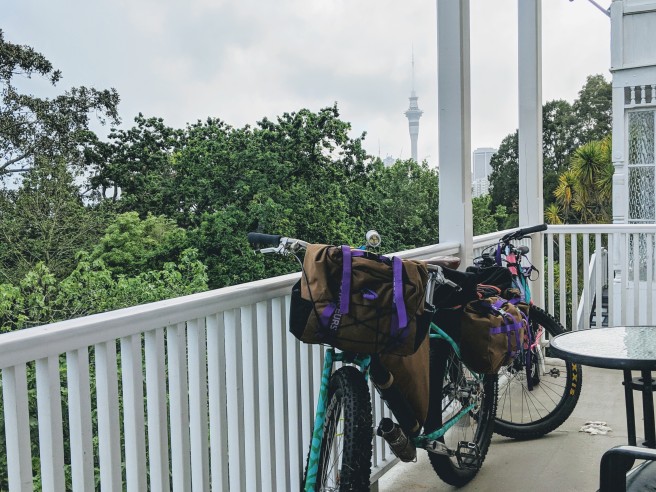 We stayed two nights by Ponsonby, which is the main trendy strip of bars and restaurants in town. Thai takeaways, some nervous Euro kids in the hostel kitchens that were just starting their trips, some tired looking ones that looked ready to go home, sick of driving a jelly bean van around or picking fruit or whatever they were up to.

An old Chinese lady with a paper face mask on, the kind I should wear when I’m spray painting or cutting a lot of wood but don’t. She pulled the facemask down.

“You know computers?” she asked.

She showed me the screen, everything is in Chinese, dozens of windows full of Chinese characters all displayed in that font that Notepad uses.

“Hackers the inside the machine! Inside! How to get them out!”

“Uhh…” I scrolled around for a second, not gonna be able to help with this one. “I’m sorry, I have no clue.”

“Hmmph.” She turned back to the computer and covered her airways with the facemask.

The hills around Auckland aren’t huge, but they are mega steep. In the Waitakere Ranges west of town, it’s all 1000 or 600 foot climbs, straight up and down, up and down. Black sand beaches in Karekare and Piha. Our third day out a big storm rolls in, fortunately there’s a campground that has cheap beach shacks. I’m beat and ready for a day off anyway. It always takes a couple weeks to get into the swing of things on tour. 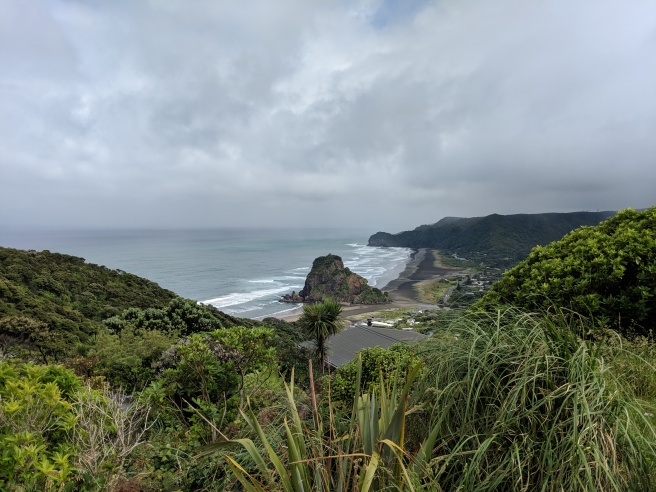 In the Piha RSA (Returned Services Association, it’s like an Eagles or VFW) for some fish and chips.

“I’d ask you to remove your hat,” scolds the woman tending bar.

“Oh, sorry,” I say. Damnit I hate when I get nailed for that.

“Well just take your hat off when you come inside, and you wouldn’t have that problem,” scolds my wife. Yeah yeah.

Over at the kitchen window, a guy from Louisiana is picking up his food.

“Ya’ll got any ketchup back there?”

“It’s tomahto sauce here mate, and we’ve got it yes.”

“Ah, come on now. You screwing with me? Tomato sauce? I just want some ketchup.” 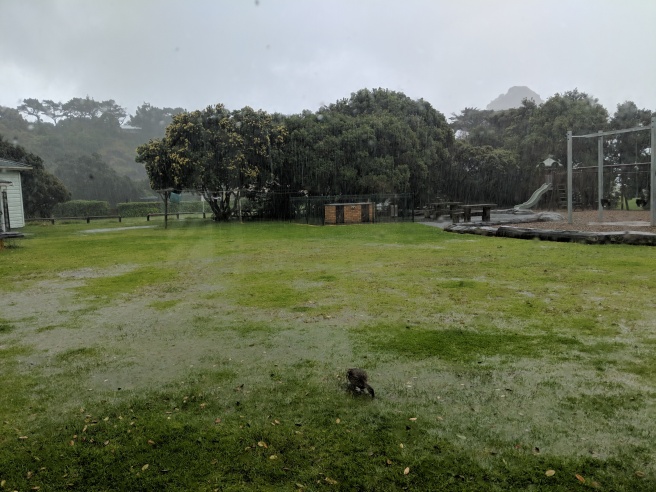 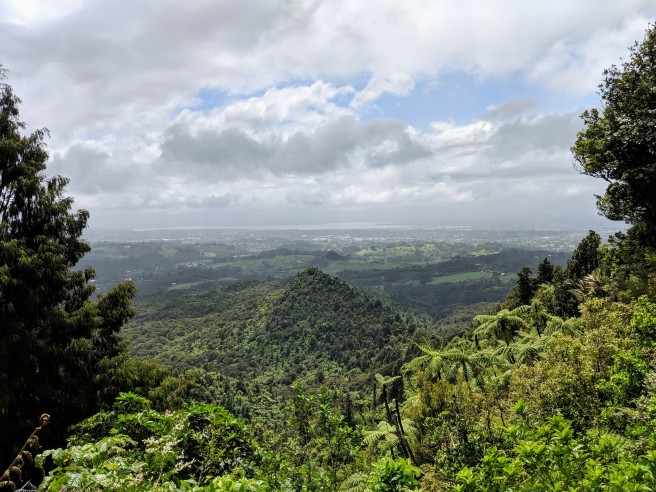 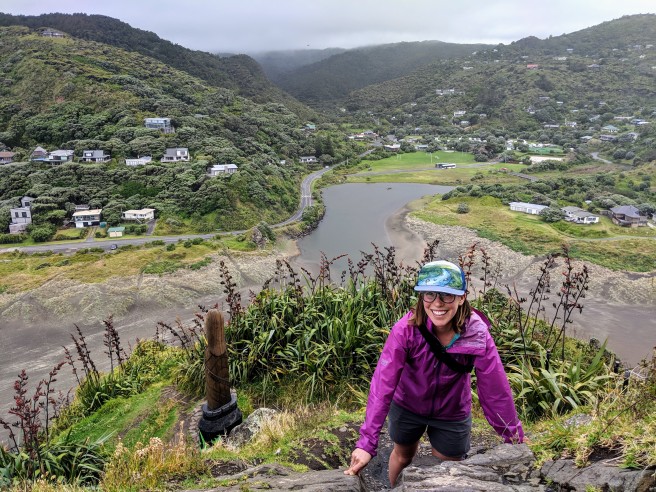 We leave Piha the next morning, another heinously steep climb back to up from the ocean and into the mountains.

A couple days of looping around, then we head back into the north side of the Auckland metro area, and hop on a ferry back to the CBD (central business district). I love the ferries- they’re all jet boat catamarans, loud, and super ripping fast. And it’s free and easy to wheel a bike on. 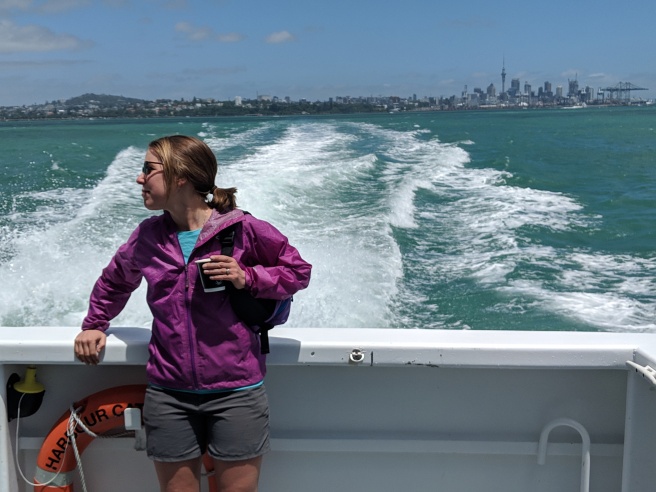 Back to the hostel on Ponsonby, where we meet a couple other bike tourists, one from San Francisco and one from Germany. They both seem anxious to get going on their trips. We’re heading the same way as the German kid, and I tell him about the ferry that we’re going to take tomorrow to Half Moon Bay (it’s 15 bux or something, and cuts out 20 or so miles of stop and go riding through the suburbs).

“Oh, ok. Well maybe we’ll see you on the road.” The schedules some people set themselves are funny- I mean the whole point of bike touring to me is that there’s no schedule, I get to forget the date and day of the week and just be out there. But whatever floats your boat, everybody has their own way.

After the ferry we ride down the coast from Half Moon south along the Firth of Thames. We find a beautiful camp spot by the water one night, then loop up and around through the town of Thames, then head north into the Coromandal. 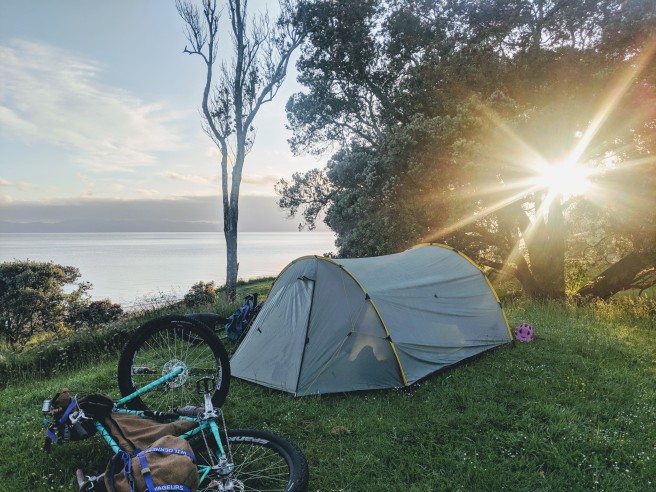 A couple days of easy pedaling on a coast road, then two huge climbs over the hill to Coromandal town, which surprise us after the last week of flat cruising.

Fish and chips (7 bux NZ) for dinner one night, a seafood chowder pie the next (4 bux NZ). Anybody who says food is expensive here isn’t eating enough fish, chips and pies.

30 miles out of town, we go through little Colville, which has a Buddhist monastery and lots of Himalayan prayer flags. It’s apparently an old hippy outpost. The road turns to dirt a few miles later, and we wind around the coast.

Up a crazy steep climb in the afternoon sun, and I’m immediately sun burnt, little blisters popping out on my arm under the sweat and sunscreen. I’m sure I’ve been frying all day, I just didn’t notice until now.

I guess the weather has been brighter than it was when we were here two years ago, but we’ve both been getting shredded by the strong sun- there’s a hole in ozone above New Zealand, so the sun at sea level feels about as strong as the sun at 10,000 feet in Colorado. Or maybe we’re feeling it more because we came straight from fall in grey Pennsylvania, where we hadn’t seen the sun for a month. 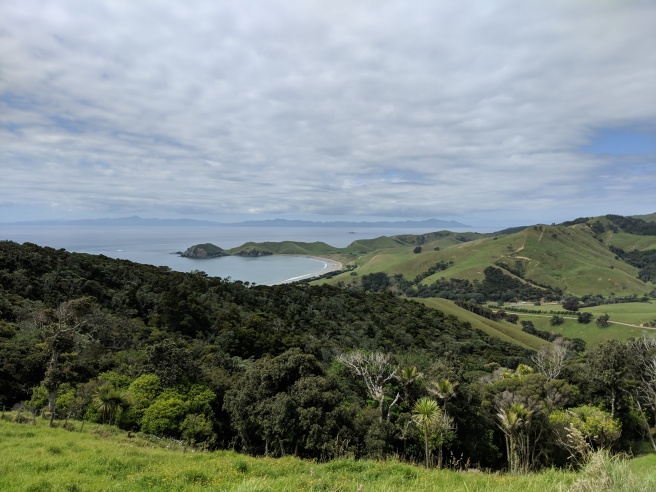 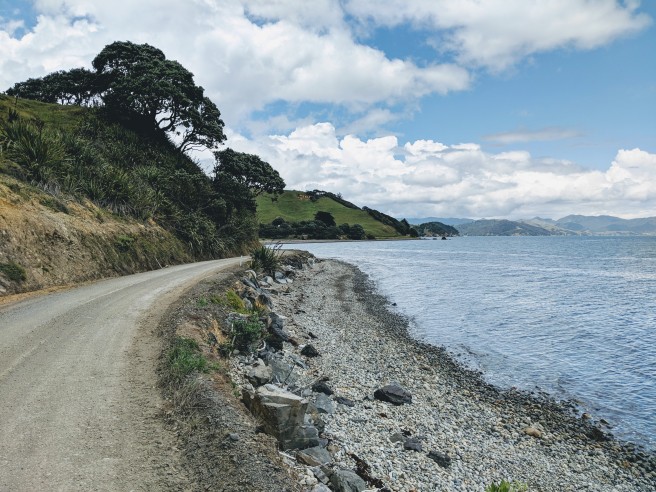 Quiet beach camping, and a night of itching at my sunburn. I go swim in the bay the next morning, the salt water seems to help.

We eat breakfast with an Austrian cyclist who’s headed the same way we are, then ride out together on the dirt road north. He’s a fun dude, but our riding partnership doesn’t last too long. He’s on the typical Euro trekking setup- skinny tires, four stuffed Ortlieb panniers, and a big rack top bag. Bike has to be well over 100 pounds, and even though he’s a strong rider, all that weight really slows you down. We wait up a couple times

So off we go, up the Stoney Bay Track. It’s steep at first, Colleen spins her little gear and I plod along behind pushing my bike. Then we hit an intersection- it says the mountain bike track is to the right.

“Right?” I ask Colleen. She planned this one, so I’ve relieved myself of any and all navigational duties. Far as I’m concerned, I’m just here to look pretty and carry all the gear.

“I think so,” she says, doesn’t quite seem sure. So the shoe is on the other foot now- usually I’m the one getting us lost.

“I’m sorry! We can turn around,” Colleen says.

“No it’s fine.” I mean this is the kinda thing I like, she should know that.

Another intersection, triangles both ways. We take what looks like the better track, but after a mile or so it disappears into the bush.

I’m pushing up another fence, ducking under scratchy trees.

“Wait!” Colleen yells. “I don’t want to keep just pushing our bikes into the bush. We can turn around. I’m sorry.”

“Wouldja stop apologizing? I like this kinda stuff. Seriously.” We decide to head back to the intersection, maybe the trail is up the other fence.

It is, another half hour or so of pushing through the weeds, then we finally hit the top. Steep jungle fern covered hillsides, big rocky outcroppings, turquoise water. It’s pretty.

Then we rip down the other side, which is just as steep, but now there’s more of a trail. My brakes are screaming, I wish I had a bigger front rotor, lean back, brake, release, brake, release. So steep, splash through the stream at the bottom, water hisses and steams on the hot rotors. Whew doggies.

There’s another beautiful bay to camp at, but we didn’t plan very well and have no food. Very much regret that, so we start the ride back to Colville. Up and down, up and down. It’s a beat down of a route.

We make it to town three or four hours later, grab a beer at the little hippy store, then ride out to a campground.

A couple German cyclists are there, one is walking around in his underpants. Europeans.

“Hello! Where have you come from?” Mr. Underpants asks.

“We did that track around Stoney Bay,” I say.

“Oh, tomorrow we are planning to do that he says. Is it good cycling?”

“Man, it’s steep, lemme show you some pictures.” I’d never tell somebody not to, but I wouldn’t want push a full touring rig up there. I wonder how our Austrian friend made out.

Colleen disappears, apparently not excited about talking to a strange man in underpants. She must not understand that since he’s European, the underpants are ok.

4 thoughts on “Auckland to Coromandal”