“I can see a trail down there. We should turn around,” says Colleen.

We’re 20 feet above the swamp, balancing our bikes on a railroad trestle that’s being rebuilt as a bike bridge, but isn’t quite done. It has some real janky boards to walk across, which makes me feel like we’re some old timey sky scraper construction guys.

“But what if there’s some impassible swamp at the other end?” I say. I keep moving forward across the boards.

I’ve developed this technique over the last few days on the Southern Ditch Divide. When we run into an obstacle, like this swamp:

Or this road that got eaten by a swamp:

Colleen’s inclination is to start looking for a way to turn back and find another way around. Istead of arguing with her (and losing), I just keep going.

I inch forward along the boards, staring at my tires, making sure that they don’t roll off. This would be fine without a bike, but with it- it’s a little nerve racking. If I fudge up, I’m either going to fall into the swamp on top of all my stuff, or all my stuff is going to fall into the swamp in top of me. I scoot another few feet forward, the board sags and bounces a little.

“This is so stupid,” Colleen yells.

Yeah, yeah. “I’ll just go to the other end, then come back and give you a hand with your bike,” I say. Forward a little more.

“What if the bridge isn’t finished at the other end?” she says.

I pause my scooting. Hadn’t thought of that. Forward a little more. Pause again. Actually, maybe she’s right. It’s a long way to the end of this thing.

“Ok, maybe I’ll get turned around, then come back out and help get your bike turned around.” I scoot backwards, shimmy past Colleen on her trestle, then turn around and take a picture. Colleen expresses her displeasure with a finger.

I go back out, help turn around Colleen’s bike, then head down to the trail she saw, and damned if she isn’t right.

The walk boards don’t go to the end anyway. That would have sucked. Guess she wins this round. 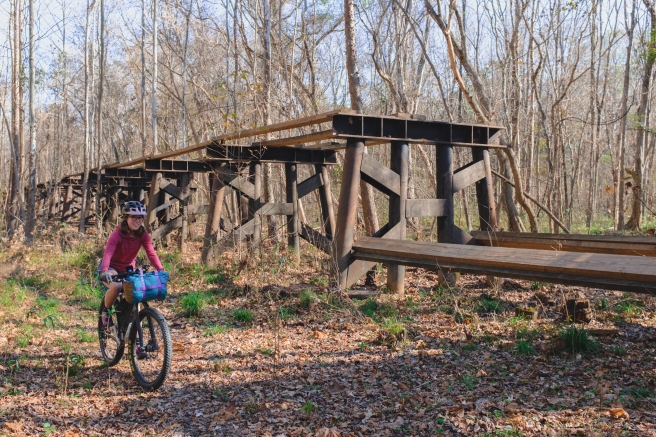 Before we got onto the Palmetto Trail/ Southern Ditch Divide, we spent three days in Charleston waiting for the rain to clear out. When I booked our Amtrak tickets, I forgot that Charleston was where the Civil War started. This is the battery, where people sat and had drinks and celebrated when Confederate artillery started blowing up the Union garison at Fort Sumter.

And they’re still fighting over things from that war. I was reading the paper while we were in town, and the town council is currently trying to agree on a new, and less laudatory plauqe for the statue of John C. Calhoun.

Here’s a sample of the insane things Calhoun said:

Never before has the black race of Central Africa, from the dawn of history to the present day, attained a condition so civilized and so improved, not only physically, but morally and intellectually.

In the meantime, the white or European race, has not degenerated. It has kept pace with its brethren in other sections of the Union where slavery does not exist.”

“…the relation now existing in the slaveholding States between the two (races), is, instead of an evil, a good–a positive good.”

And they have that guy looking over town from the top of a 115-foot-high pedastol. I’m not staying that where we’re from is the most enlightened place in the planet, but things like the Calhoun statue really make the South feel like a different country.

Then we went to an oyster boil with the folks we were staying with, and that was a swell time, and didn’t feel like a different country because it was a fun party.

I was taking to a girl while prying those salty gritty little barnacle looking things open with a dull knife.

“You guys are from Pittsburgh? I worked at UPMC for a couple years, and I liked it up there, other than the weather,” said the girl.

“We feel the same way, that’s why we try to get out in the winter.”

“My family was so worried about me going up North, they said ‘everyone’s going to be so mean and rude to you’, but they were really very welcoming. I was so surprised.”

All the information we have access to now, and everybody still thinks everybody else is weird until they go see for themselves. I wonder if that’ll ever change.

After the railroad trestle debacle, we ride out off the swamps and onto some pavement into Columbia. This’ll be the end of the Southern Ditch Divide for us, because we’re heading west to Athens, Georgia from here.

The trail certainly isn’t a super put together thing, but I had a blast. Easy camping, funny adventurey riding, railroad ballast, and a beer and a gas station roller dog at the end of most days. That’s bliss to me. 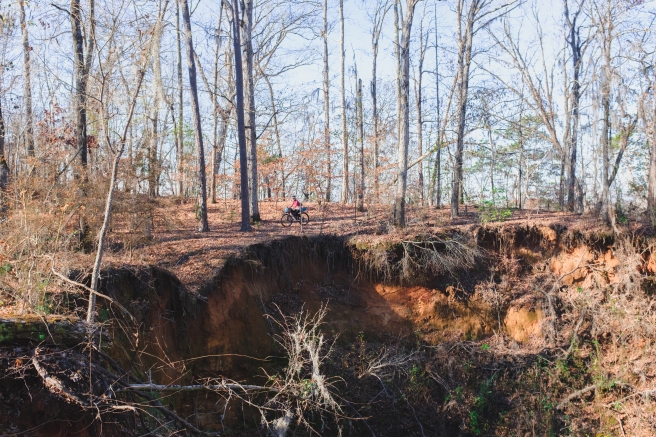 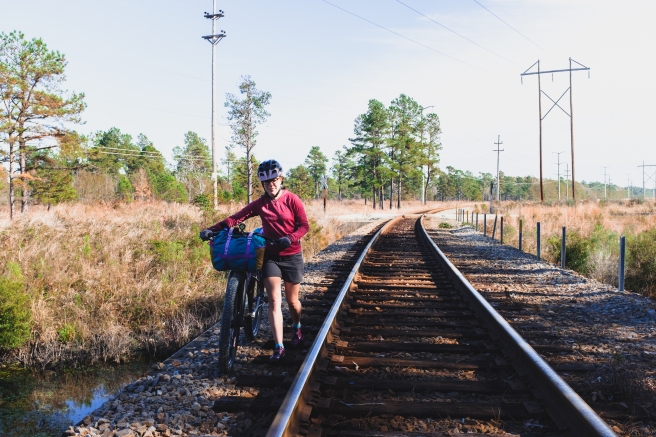 (Maybe not bliss to Colleen though, who doesn’t share my passion for backyard bushwalking, or roller dogs). 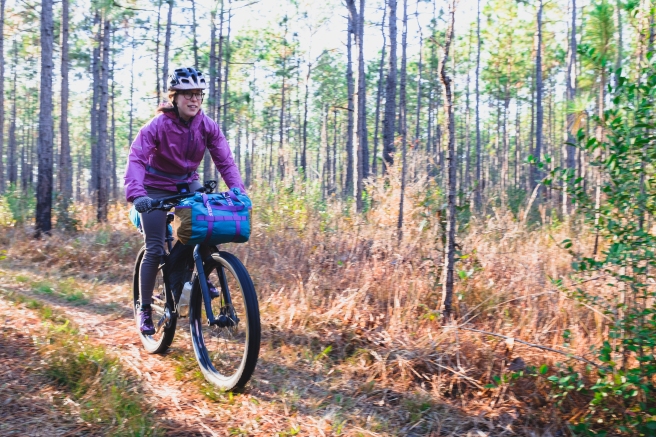 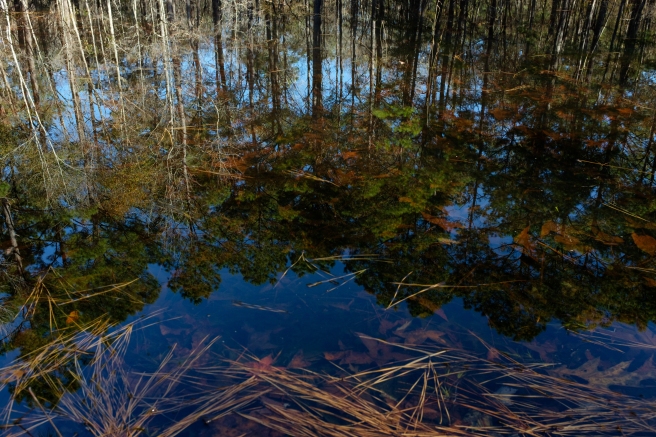 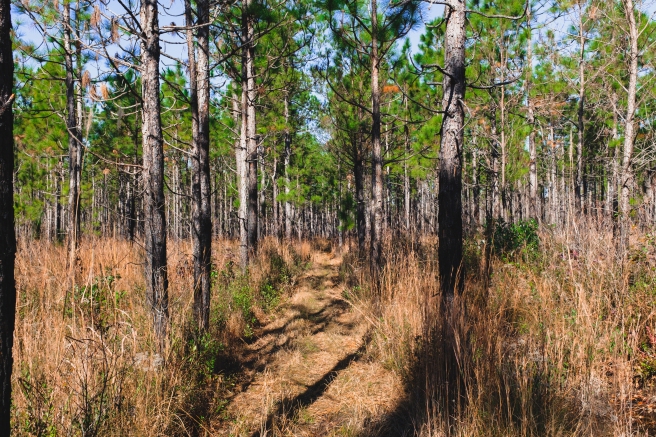 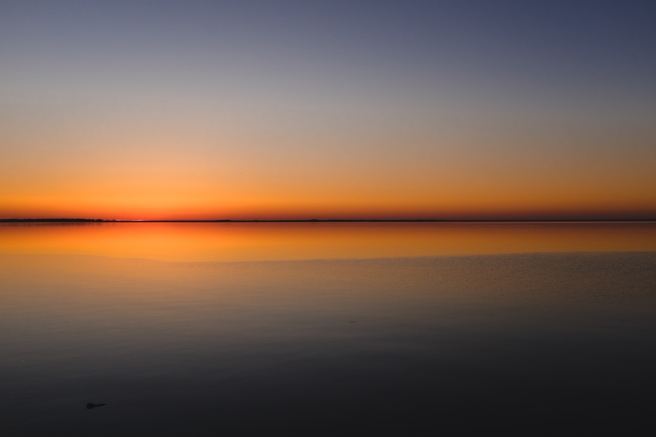 In Columbia we stay with Scott, who runs the bike co-op in town. He introduces us to Turbo Kid, which you should probably go watch right now because it’s way better than my cruddy blog.

Next morning we head west, one real turdy day off riding on busy roads to get out of town, then some very pleasant gravel. 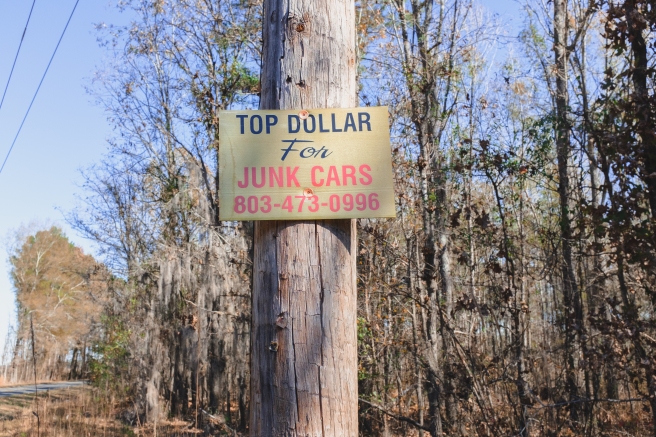 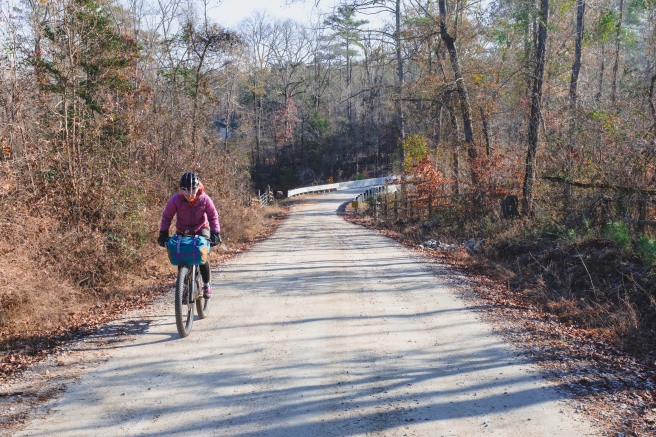 It’s been cold at night, 22 sometimes and never much over 30. But the hardest part of touring this time of year are the short days- it’s not warm enough to get rolling until nine and we need to find a place to camp before five. That makes it tough to make much more than 50 miles (we did 65 one day, and that was the absolute ceiling).

Most nights we camp in pine plantations, and that’s excellent because we can make a little fire and at least stay up until eight or nine.

But sometimes we get stuck. In the summer time, stealth camping is fairly easy- wait until just about dark, roll off the side of the road in the weeds, sleep, get up just after the sun and roll away unnoticed.

In the winter, that needs modification, because there’s no way we want to hang out in the weeds for 15 hours, from five PM to eight AM.

So our new method goes like this: roll into a sleepy nowhere town, try asking for a spot in the grass at all the churches (there are usually a half dozen), realize that the pastors have all gone home for the day.

Ride to McDonald’s just after sunrise, get an egg McMuffin, and feel like a regular old sneaky hobo.

Close to the Georgia border, the soil charges from sand to thick red clay. 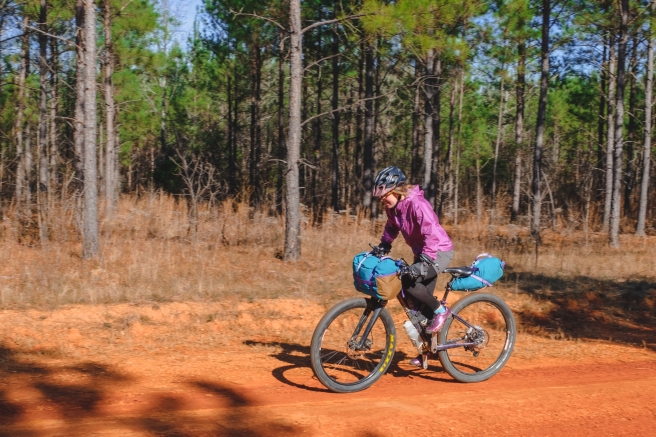 Our route is actually really good and almost all dirt. I wish I could take credit for some recconaissance, or pouring over maps, or careful plotting (I read a lot of bikepacking blogs, so I know that these are things you’re supposed to do on your bike trip, because they sound like military stuff, and that’s super badass), but all I did was use bike directions in the Gaia GPS app, and drag the line around a little.

Riding through some little towns, everything is weirdly quiet. Since leaving Charleston, we’ve hardly seen any people. I’m not sure if nobody lives out here, or if people are just hiding inside because it’s a cold week.

Last stop in South Carolina at what has to be the most lively 711 in America, the guy and the girl behind the counter have the music up loud, are dancing and clapping, place is packed, a guy bursts in “Hey y’all I got a house heater and a 30 inch storm door for sale? Any takers?” Nobody says pays attention to him. “Alright now don’t chy’all jump at once.”

“Man this is the most fun gas station I’ve ever been in,” I say.

“Ha!” The guy similes. He’s missing all his front teeth. “Well can’t whistle while I work now, so I gotta jam instead.”

One more cup of coffee, then we cross the Savannah River into Georgia. 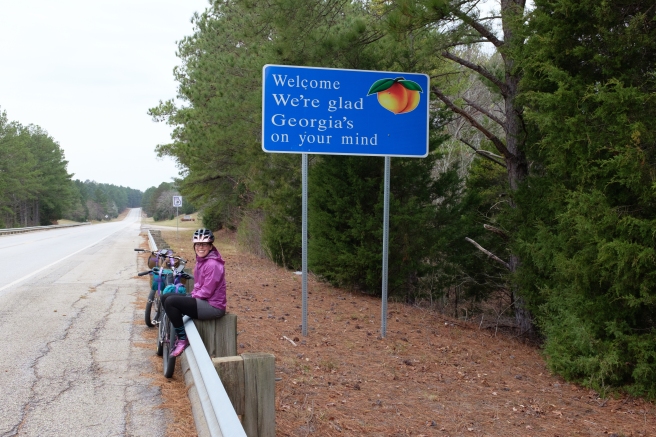