I drive west, down out of our little old mountains toward the big new mountains. Widows down, cooking through Indiana (not cooking as in going fast, cooking as in I’m cooking like a pig in a roasting pit, it’s almost a 100 degrees outside, the Shark’s engine is right next to my leg and 220, but I guess it’d really need to be about twice that hot to cook me if I was a pig).

Feverish, I must have picked up something a few days ago, but this is one of those times where being sick isn’t an option. I need to get Colorado to scout out part of a tour, do two weeks of guiding, then pick Colleen up at the end of the Divide. So drive.

But it’s hot. Thunderstorm hits, suddenly not hot, Shark wheel wrenched to the left, instant adrenaline, solid wall of water can’t see anything but the truck pulling off in front of me. Can’t see the other cars splash by until they’re right next to me, pictures in my head of busted RVs on the news blown sideways on lonely roads, all the house goods and RV guts busted and spilled out. I don’t want that to be the Shark, don’t let that be the Shark, I need to get Colleen from Mexico. I drift onto the shoulder. The Shark buffets back and forth.

Ten minutes. Rain clears. Accelerate to 60. It’s been a long time since I’ve been that scared. Still a strong crosswind, the steering wheel is at four o’clock to keep the van straight.

Drive all day, west into the sun. It hangs longer than it should, an extra long day thanks to my speed.

St. Louis at dusk. Kansas City at night. Two in the morning, stop for gas. Check the Shark’s fluids for the 7th time. Transmission and power steering are good, burned a little oil, needs a little coolant.

“Man, you build that thing?” says a night guy walking around town with a shopping bag.

“Where you going in that?”

“Out to Colorado, for a couple weeks of work.”

“Uhuh.” I get back in the Shark and turn the engine over. “Have a good night man.”

High plains in the morning. I hated Kansas the first time I did this drive ten years ago, now I appreciate the endless rolling plains, it’s the end of the sprawl and shopping malls in Missouri, and when I hit the Black Hills, I’m in the West.

It’s not flat, not boring, kind of meditative- that dotted line comes in faster, shoots under my wheel, zooms out the back, slows down then fades over the gentle curve of the road. Light brown fields, harsh burning sun. But I’m glad I don’t have to stay- no trees, hollows, hills, canyons or streams. No place to hide, everything exposed. Also glad I don’t have to do anything to get through that headwind except press my foot down. Just hope the old 350 keeps pulling me through.

Almost to the Colorado border, pull into a rest area with a couple skinny trees, climb into bed. Pass out. Up again two hours later, keep on driving.

Up through Kanorado, gas in Deer Trail, the road snakes up through the plains. Still can’t quite see the mountains.

Late afternoon, sun behind the mountain silhouette- 1500 miles from the last range of the Appalachians to the front range of the Rockies. So relieved. Point the Shark north through suburbs spreading over the plains like kudzu. I need to hit the mountains around Lyons.

Lyons in the evening, a day and a half after leaving home. Check the Shark’s fluids for the 14th time. Transmission and power steering are good, burned a little oil, needs a little coolant. Good job Shark. Not bad for an old van.

Rocky Mountain National Park in the morning, Trail Ridge Road is the first day of the Kick Some Pass Tour I’m guiding. I need to drive it so I can answer questions about it, and figure out where to put out snacks.

Always listen to the engine, expect something to go wrong. Climb higher. A pop from the engine. What was that? Another pop. A sharp snap. Oh god, there it goes. Something let loose in there. I pull off the side of the road at 11,000 feet. How am I going to get out of here if this motor is blown? Shut it down.

Another pop. Look over. There’s a cheap plastic water bottle. Pop. Expanding and snapping out from the reduced air pressure at elevation. Not the engine. Start the Shark back up, put the bottle in my lap. Just to be sure. 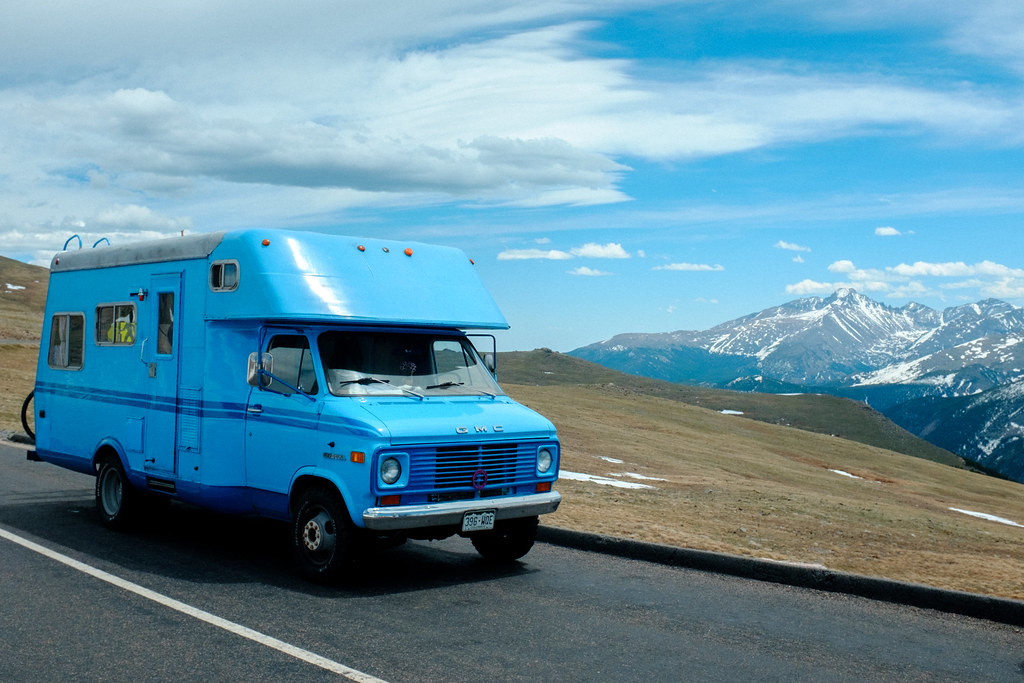 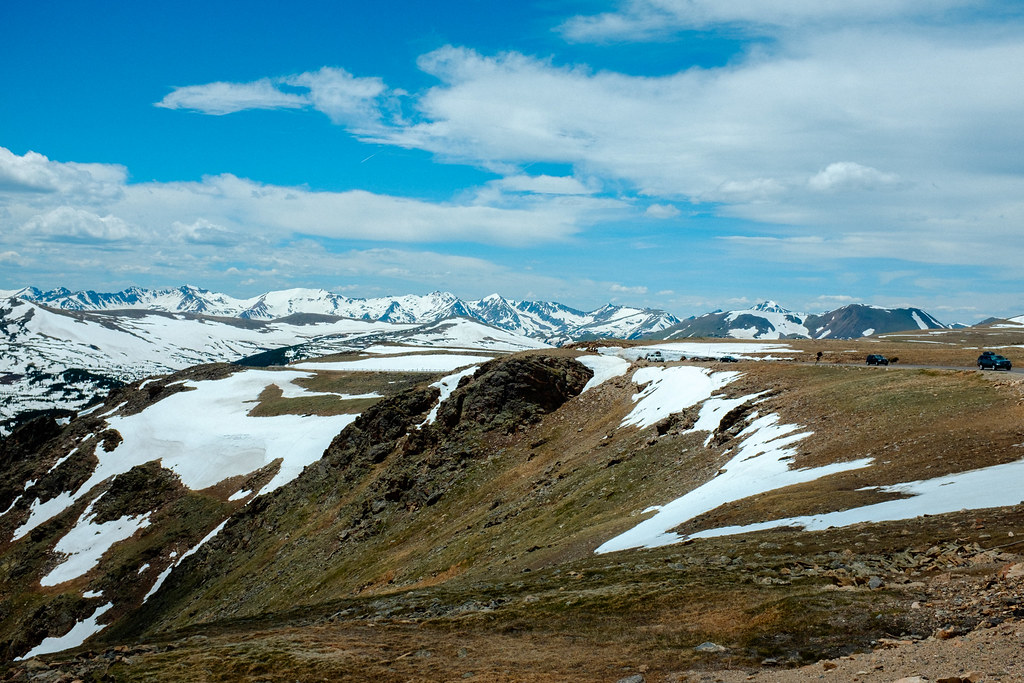 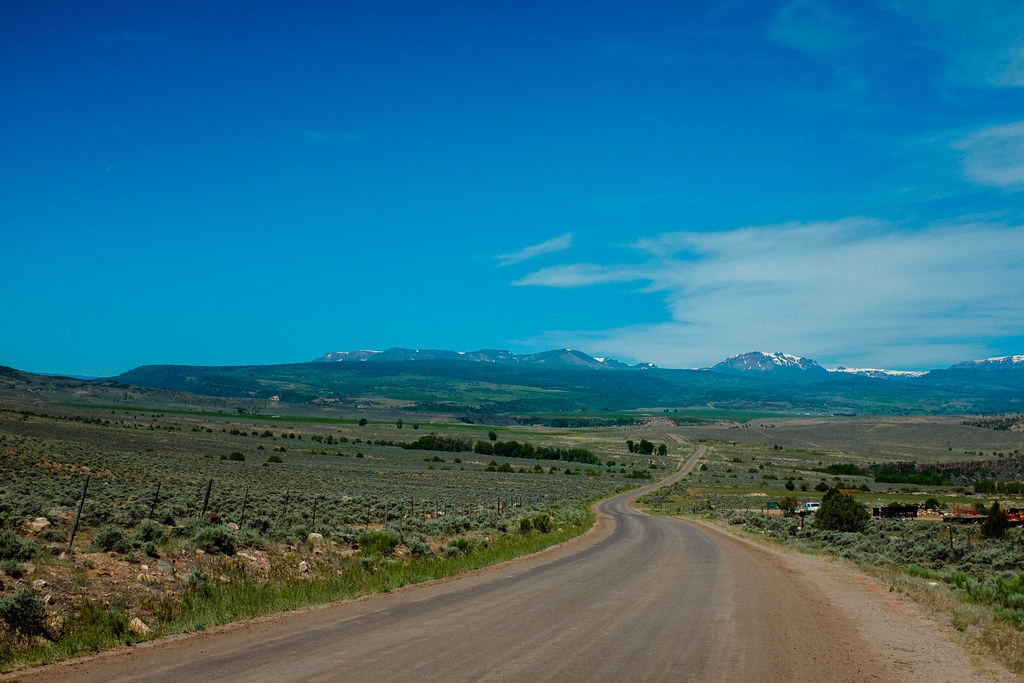 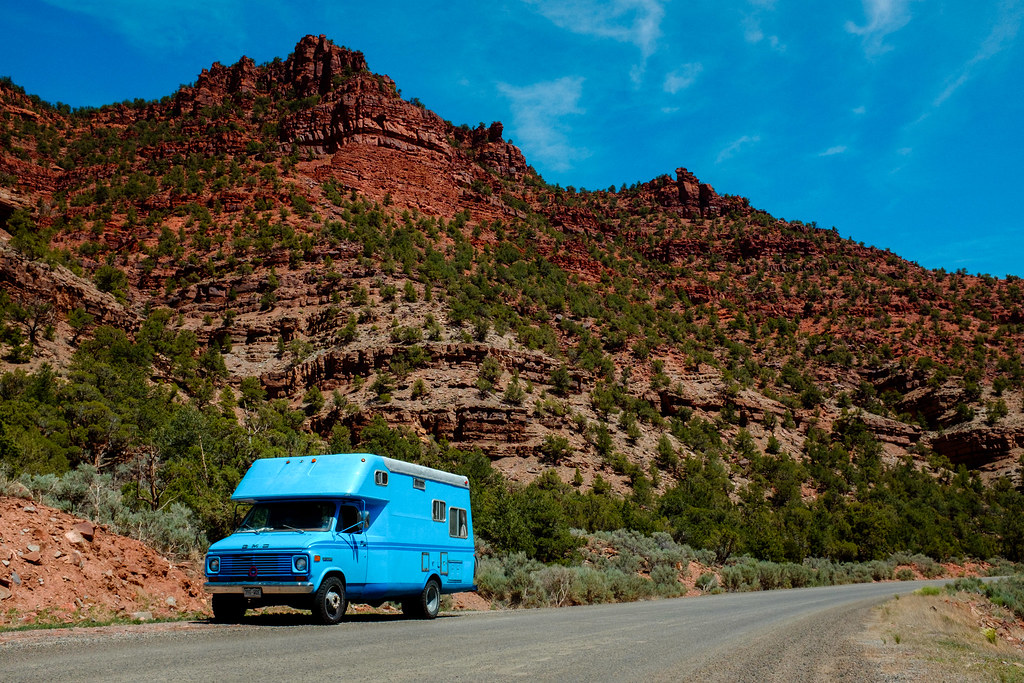 I guide the two tours, with Betsy, James, and John. Everything goes great. 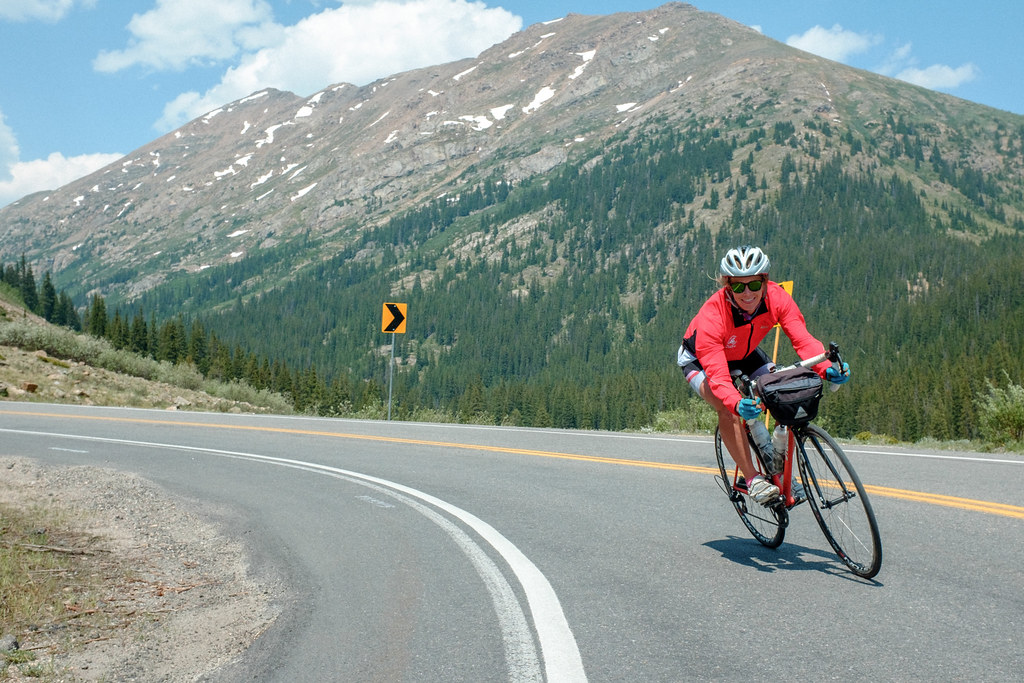 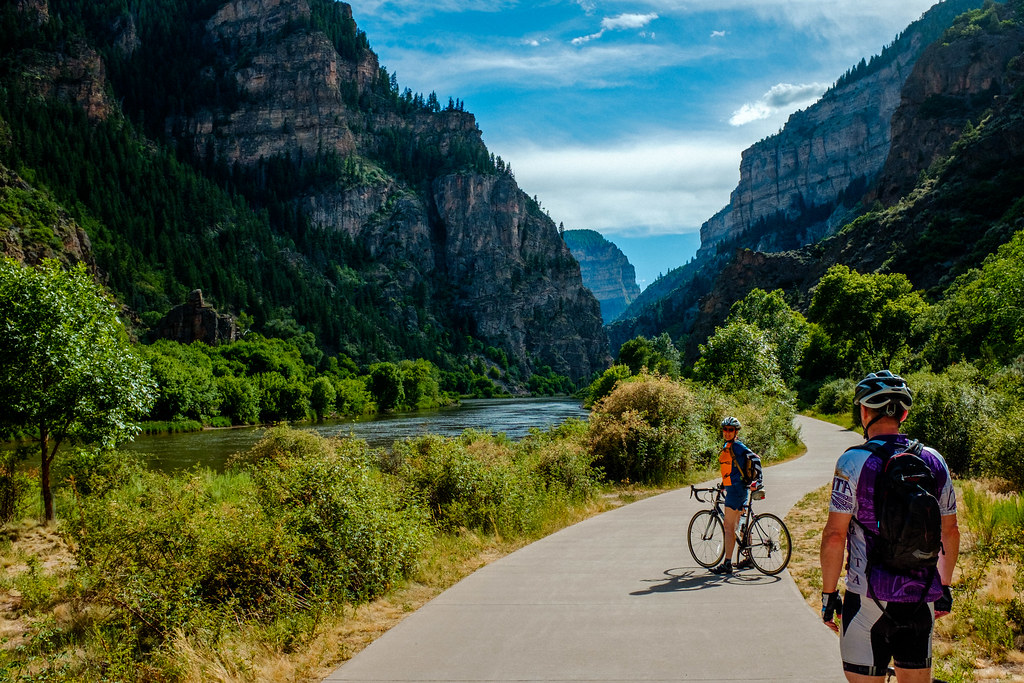 Meanwhile, check Trackleaders every day, watch Colleen’s dot move south. There she is on Red Meadow Pass, now in the Basin, through Platoro, over that rocky bit of New Mexico with the sheep.

Betsy and I are in in Red Cliff on the last day of our last trip, waiting for some of our bike tour people. Talking to a guy at the bar.

“I hate Colorado,” he says.

“Yeah, it’s just full of people like you-” he looks at my Pirates hat (it was my souvenir from New Zealand, thought it was funny, I’m not super interested in baseball, although I am real proud of Western PA and was excited to find an artifact from home on the other side of the world. Anyway.) “And where are you from, Philadelphia?”

“Whatever. So you’re just out here, doing your Colorado thing, thinking it’s the best thing ever. And I hate it. It sucks. This place is just full of rich people, and people like you.”

“I’m from Wyoming, I grew up walking over the Wind River Range in my cowboy boots. What’s your name?”

He snorts, rolls his eyes at me. He sees an Eastern city boy with a fake western nickname. Except it’s not a nickname, it’s just my name. I almost want to hit him.

We talk a while longer, turns out he has his master’s degree, worked at Wyoming NPR, then at a ranch that specializes in multi-million dollar celebrity weddings, not cows. And his mom owns a bar in Laramie, where he grew up. In town. He grew up in a town four times bigger than I did. Such a real live cowboy.

But this conversation is a good reminder, that when you put other people down in order to elevate yourself to real deal status, you just prove that you’re a real asshole. I’ve done it before. I try not to now.

Now Colleen’s down in the Res. I’m reminded of someplace I forgot everytime I look at the Trackleaders map.

Then it’s time to go get her. I stow the Wilderness Voyageurs van and trailer, Betsy drives me over to get the Shark out of long-term parking at DIA.  Check the Shark’s fluids for the 18th time. Transmission and power steering are good, leaked a little oil, doesn’t need any coolant.

Fire it up. To the border. Actually, to mid-Denver (whatever that neighborhood is called) to organize some Wilderness Voyageurs bikes we have stored in a garage. And crash one more night in a depressing highway hotel.

Next morning, really time to go to the border. Out of Denver, hit 285. Solid wall of traffic. Five hours later, barely over the front range. Good lord. Bumper to bumper on a lonely mountain road, snaking through the sagebrush. Too many people trying to get to the mountains.

Traffic finally breaks up outside of Fairplay. South into New Mexico, another day of driving to Silver City. Camp in the Gila right off the Divide route. I know Colleen will be coming by, think about standing by the side of the road, but if she saw me that’d just make it harder to finish- she’d be riding away from me and the Shark, instead of feeling like she was riding toward the end.

I hear her Hope hub buzz past, run through the trees, see her coasting away. Don’t say anything. Just let her finish.

Check trackleaders again the next morning. She’s almost there. Fill the Shark’s gas tank, and head for Antelope Wells.

Colleen! 24 days and six hours, the second woman, and only lady single speeder. 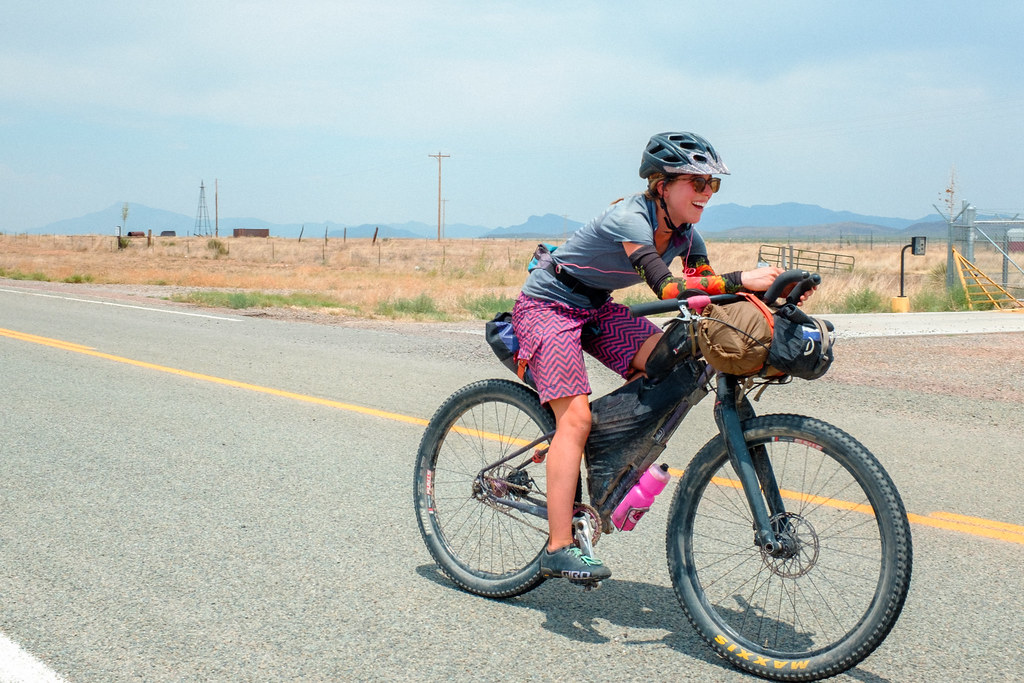 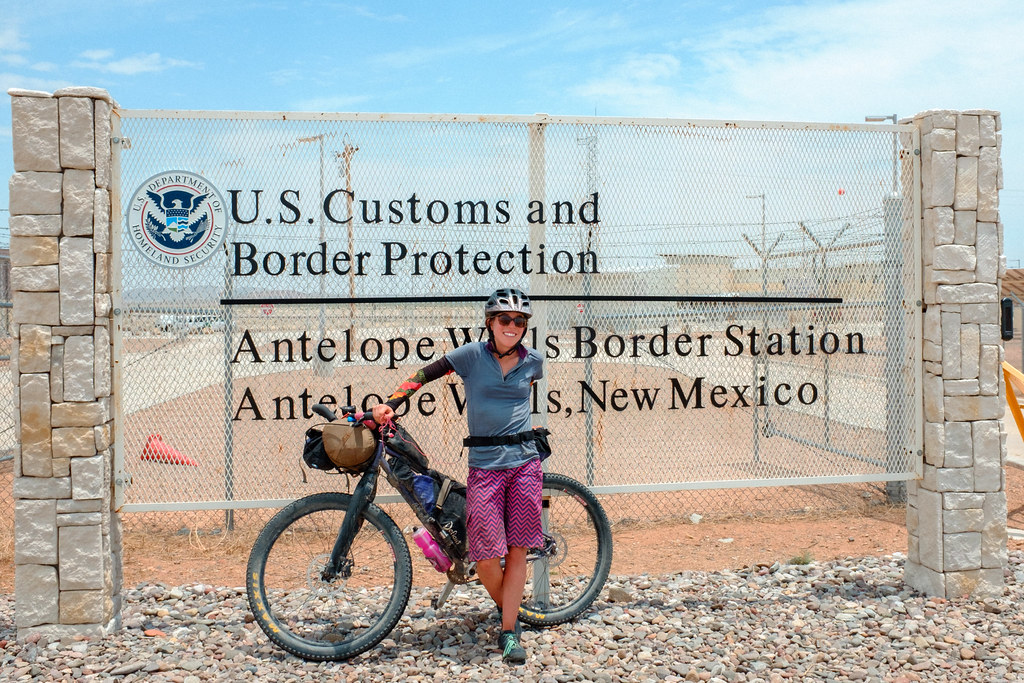 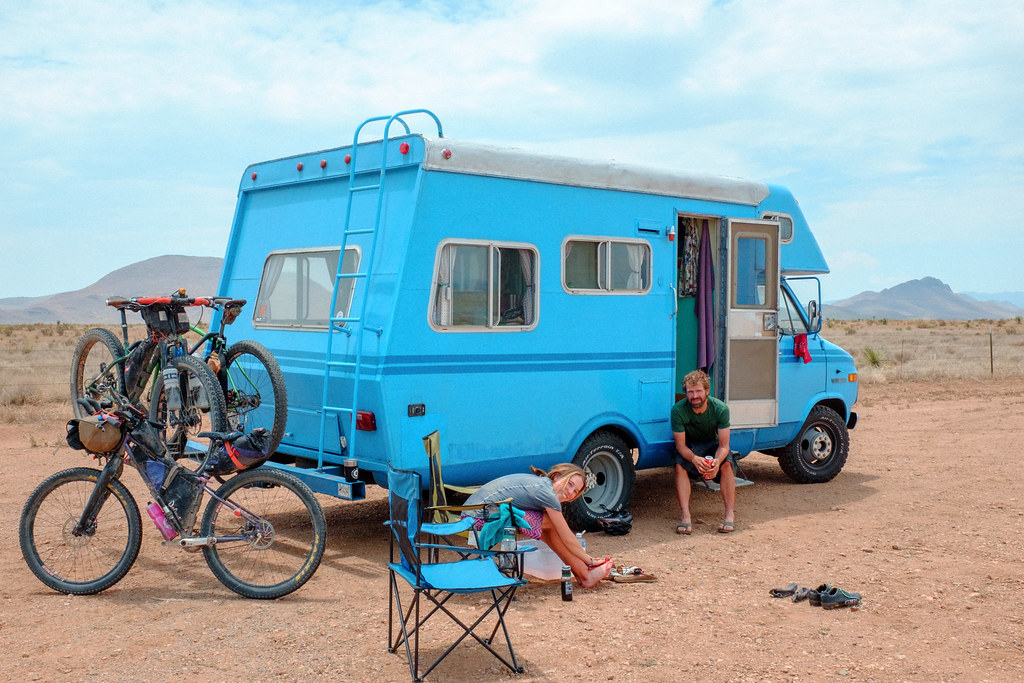 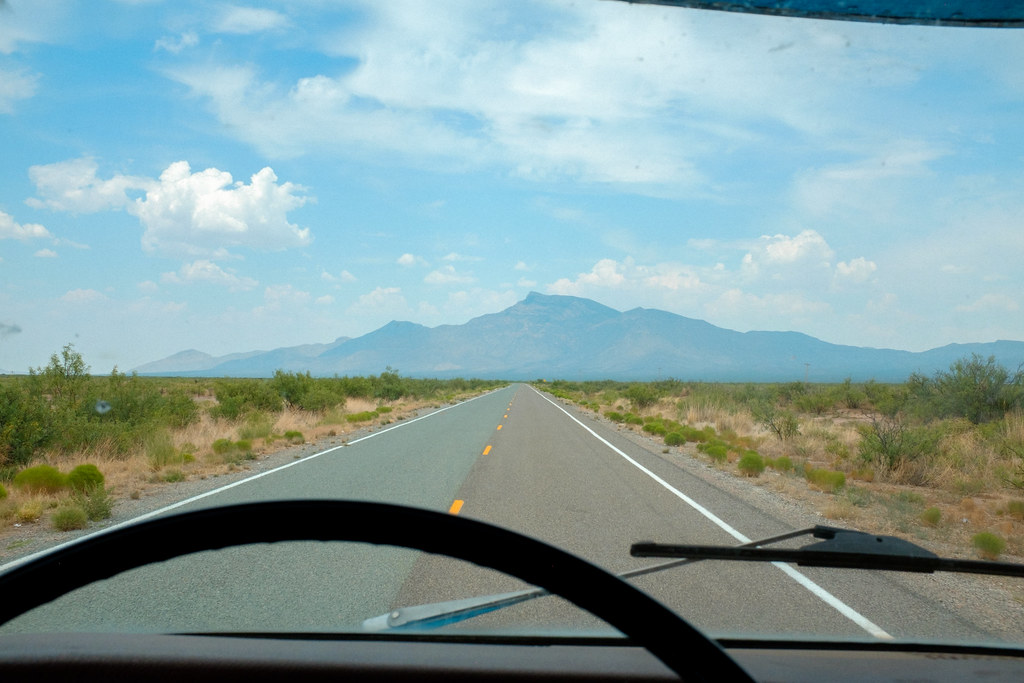 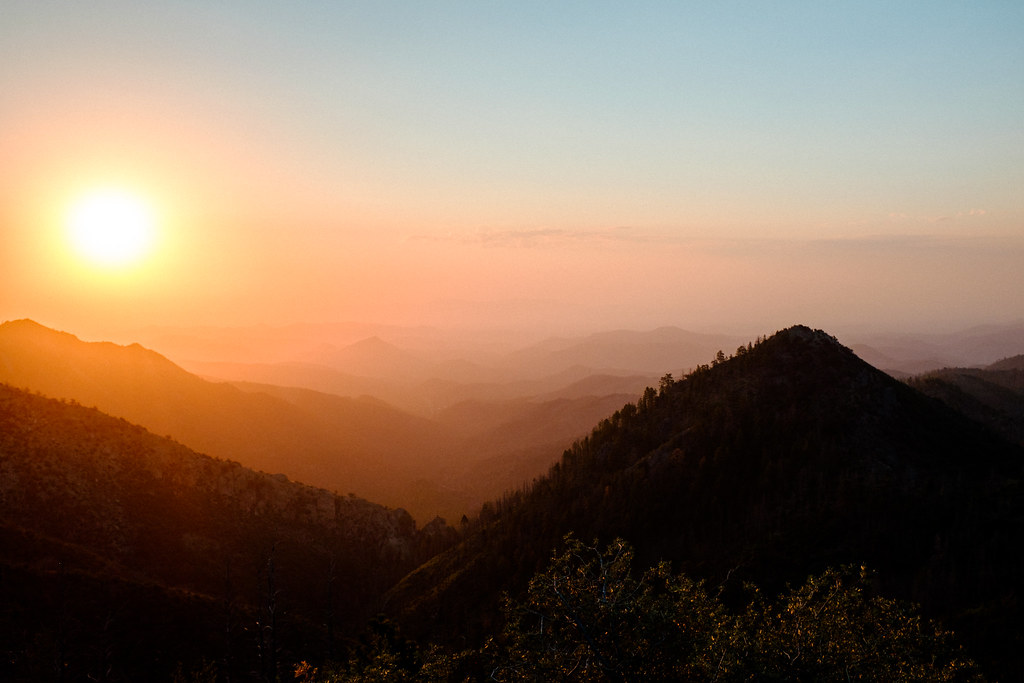 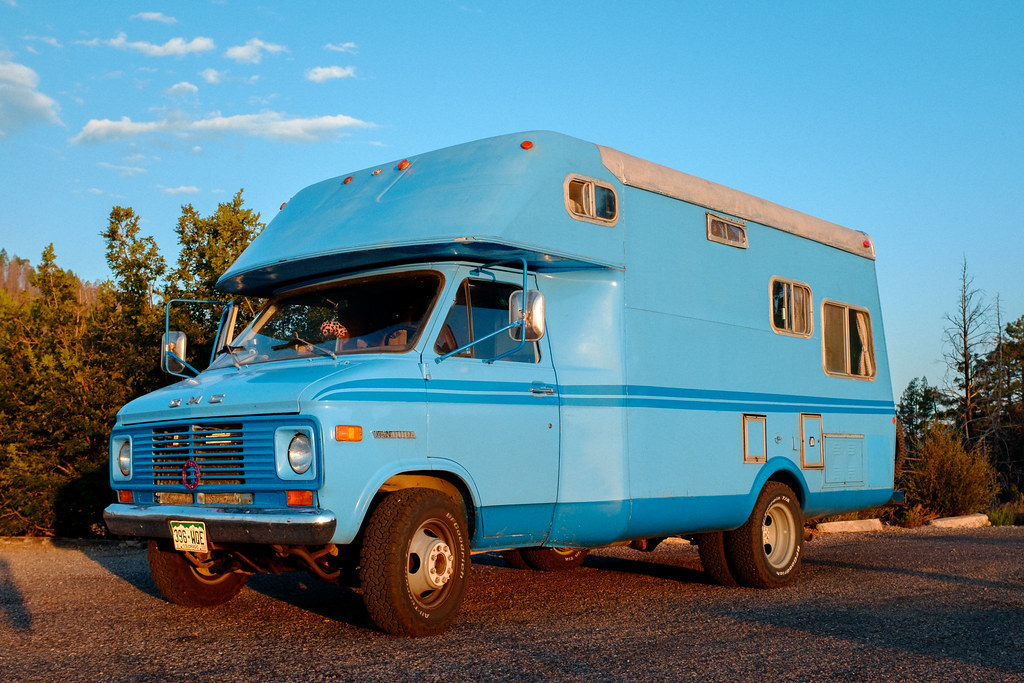 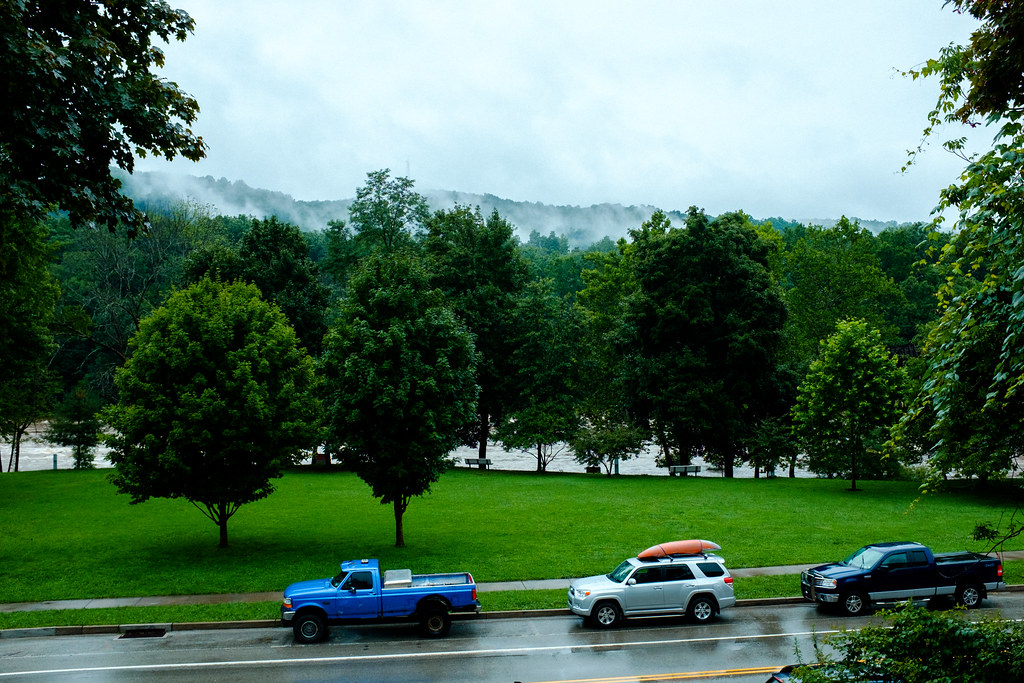 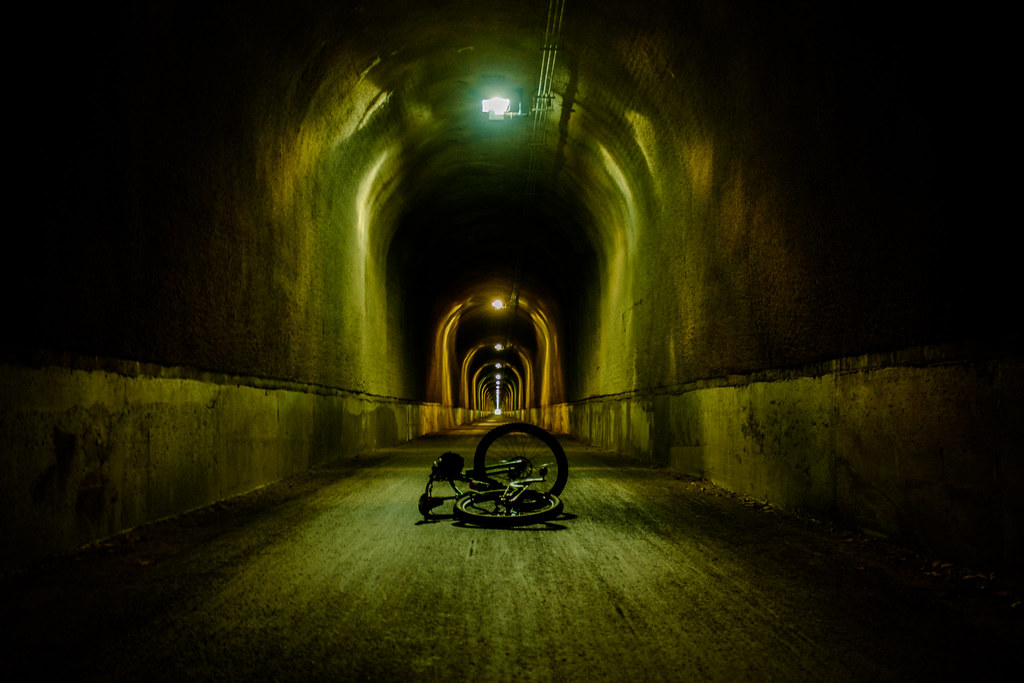 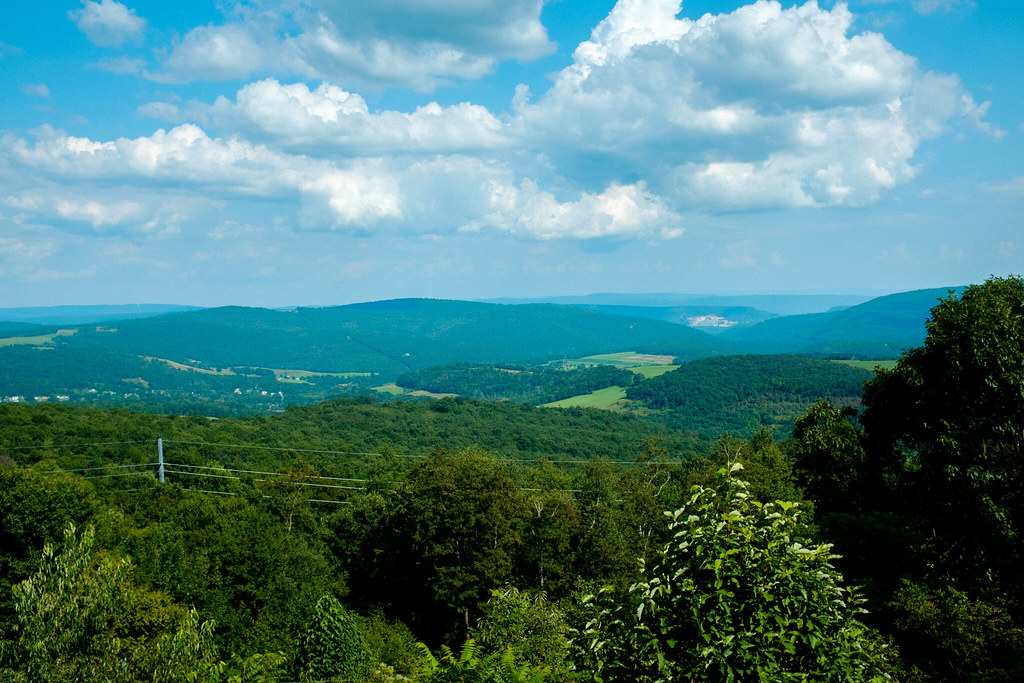 One thought on “The Divide Finish”