Back from guiding a bike tour Wednesday night, no Colleen, no cat, no Shark. Duffle bag on my back, cross the bridge in the rain. Flatten a cardboard box to sleep on and cover up with a flannel shirt, because somebody forgot to leave me my sleeping bag before they took the van to our mechanic and left for the Tour Divide.

That’s where I’m at. On to the interesting stuff.
—

Colleen made it up to Calgary early in the morning, slept a few hours in the airport, assembled her bike and pedaled up to Banff. Tomorrow she starts the big race. Here’s the Trackleaders page: Colleen O’Neil

When Colleen started talking about the Tour Divide in New Zealand this winter, I didn’t encourage her to do the race. I told her how tough it is, also how awesome and eye opening it was.

I mean, while I was out there I proved to myself that I can hop on a bicycle, start pedaling, and get anywhere in the world. If you’re reading this, you probably have a bike and some food in your gut. And that’s all you need to go anywhere, if you really want to. Just pedal away. Pretty cool.

But back to Colleen’s race— if she decided to do it, it had to be her decision. And it is. Even though people keep asking me things like if I “made” her go start the Divide.

Or made her try it on a single speed.

She gets real annoyed by that- people insinuating that she can’t decide anything for herself. Must be because of her husband, people think.

And I don’t want to write her story here (I guess if I write this I kinda am anyway), but from what she’s told me, one of the main reasons she wants to do this thing is to have some stories of her own, without me.

When we tour somewhere together, people always talk to me first. And if I come over while Colleen is already talking to somebody, they turn and address me instead of continuing the conversation with her.

I don’t even have to say anything, they see a greasy man with an Abe Lincoln beard, and assume he must be the one in charge. Forget the little girl. It’s pretty striking, and I’m not sure what to do about it.

The times I share a fifth of whiskey with some random guy and talk about stuff way into the next morning? She doesn’t get the opportunity to do stuff like that, and it bugs her real hard.

So I’m excited for her to get out there on her own, out from under the shadow I unintentionally cast over her (sometimes I can’t help it though, she’s pretty short).

I’m nervous for her, but I won’t be too worried while she’s riding, for a couple reasons— first, the more you ride around, the more you realize that random people out in the world are way more likely to offer you some dinner than they are to hack you up with a hatchet.

There are tons of super nice people on the Divide route. If she needs something, I’m sure she’ll find it.

But the main reason— when I raced a few years ago, I had absolutely no touring experience. My bike fit badly, was heavy, slow, and I kept making stupid mistakes. About the only thing I did right was finish, and I only did that because I didn’t want to quit and have to try it again. But I made it.

Colleen has lived off a bike for almost a full year at this point, five months this year. Her fit is dialed, we’ve figured out the gear pretty good, but mostly, she knows what she’s doing, and she’s more focussed than I am anyway.

And maybe most importantly, she legitimately loves riding gravel.

So I think she’s going to do great.

So, bike stuff, here’s the Sparkle Pig (Colleen posted a pack list on her blog, but since I’m the team mechanic I’ll do this part): 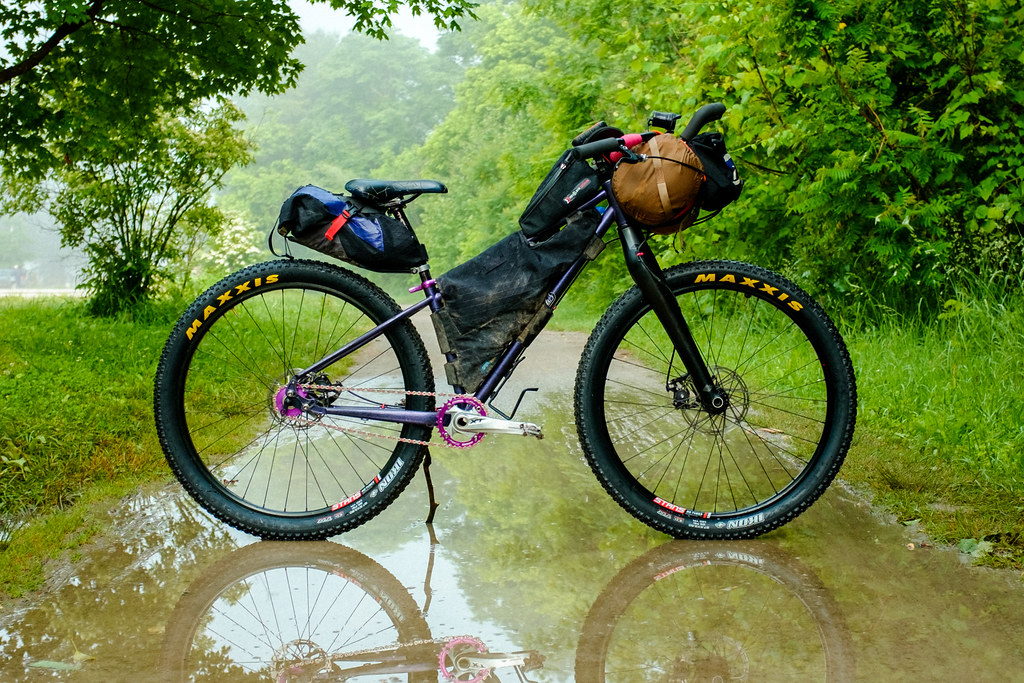 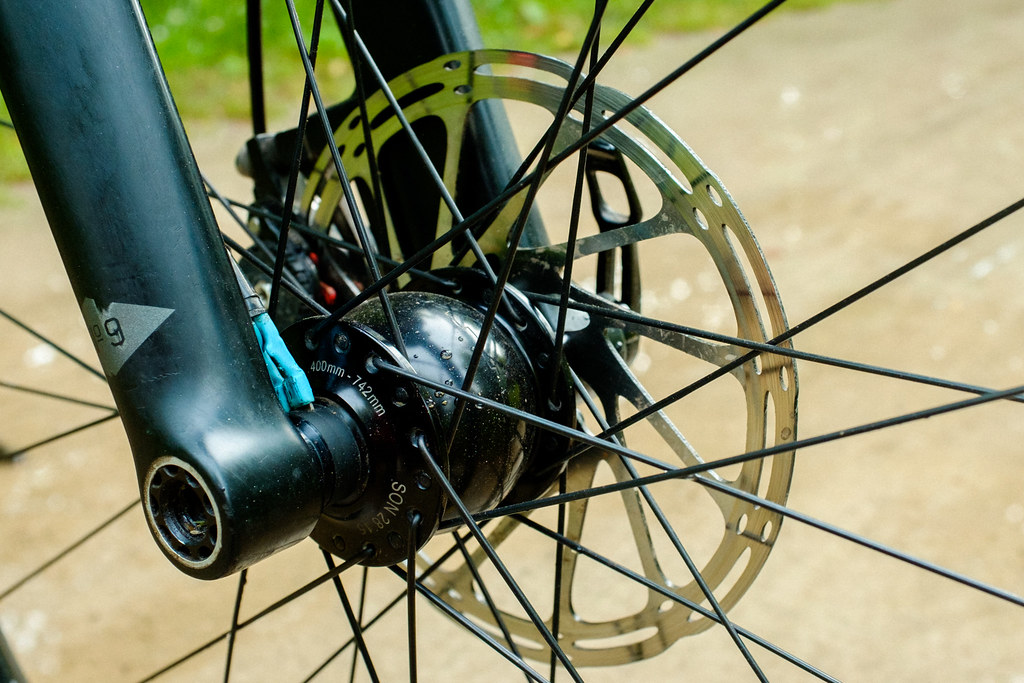 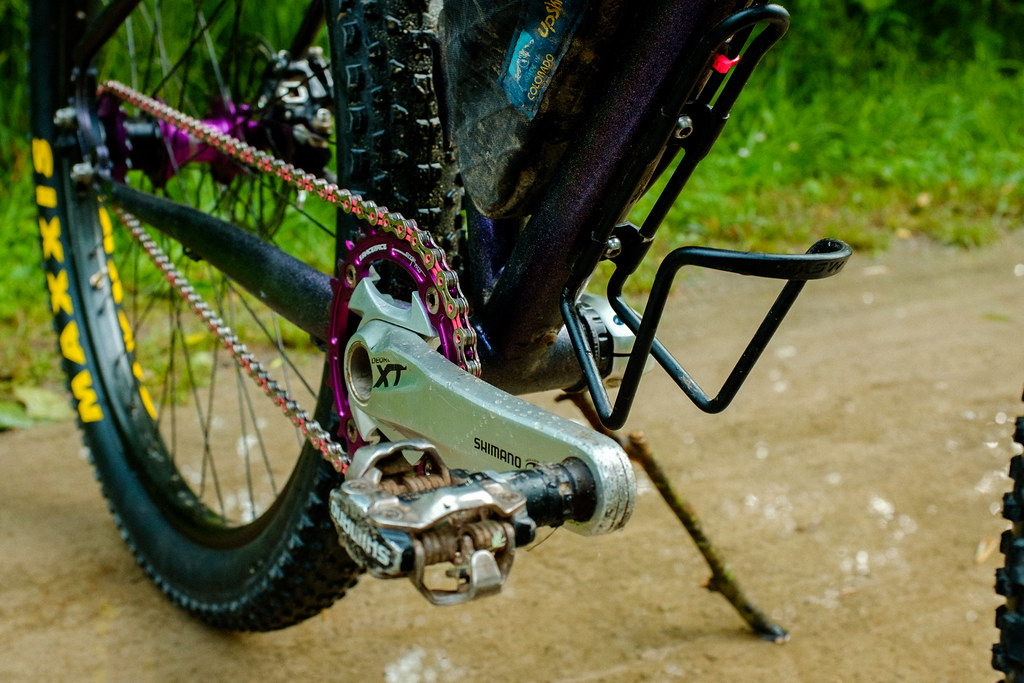 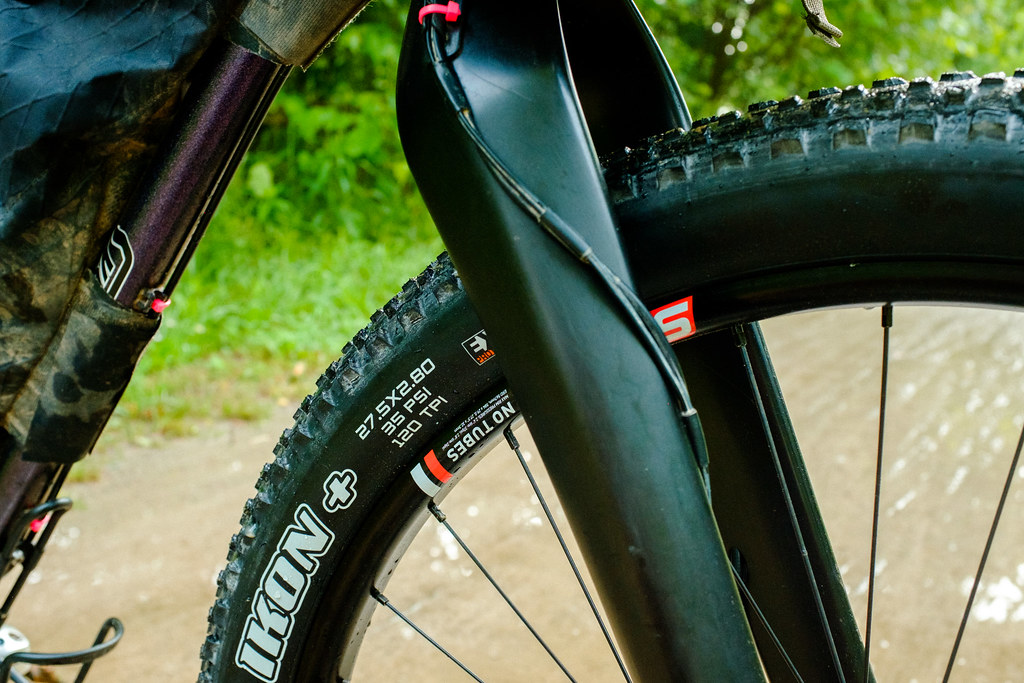 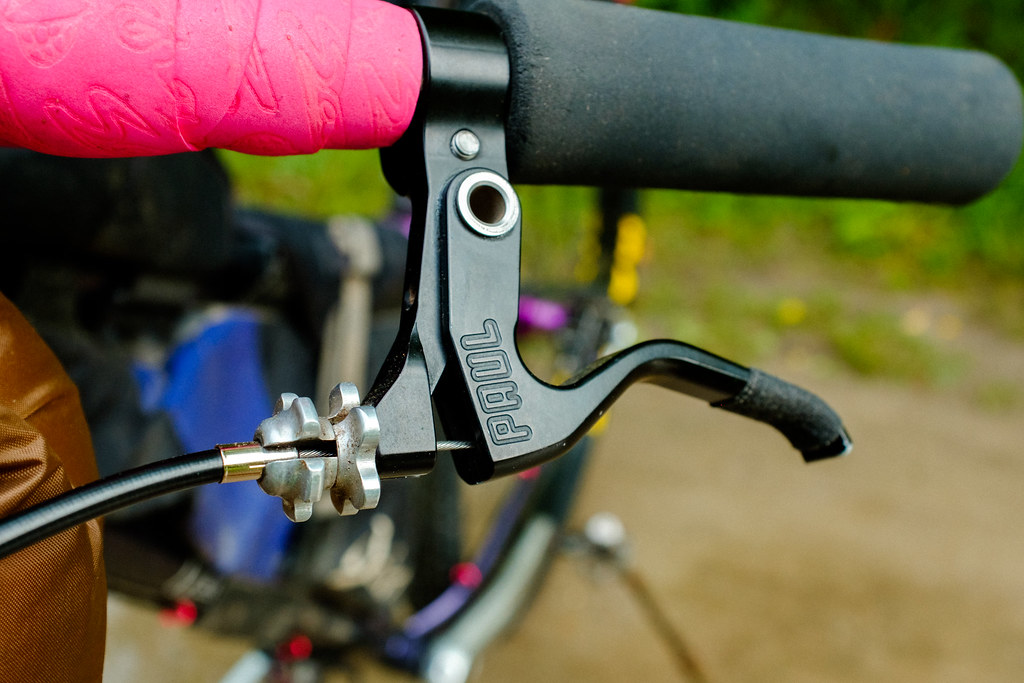 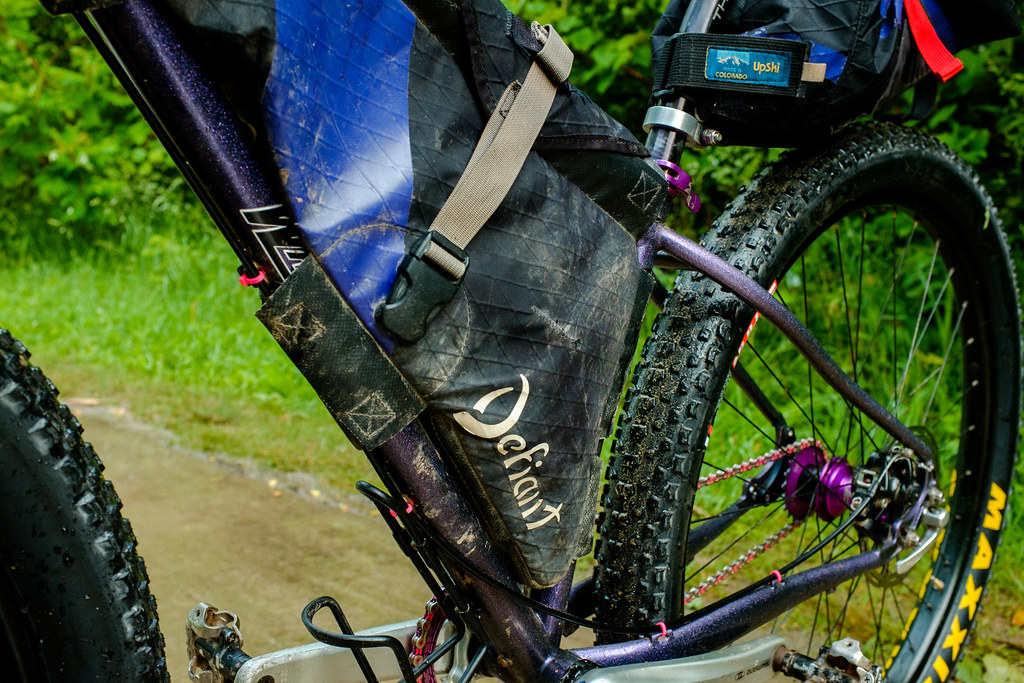 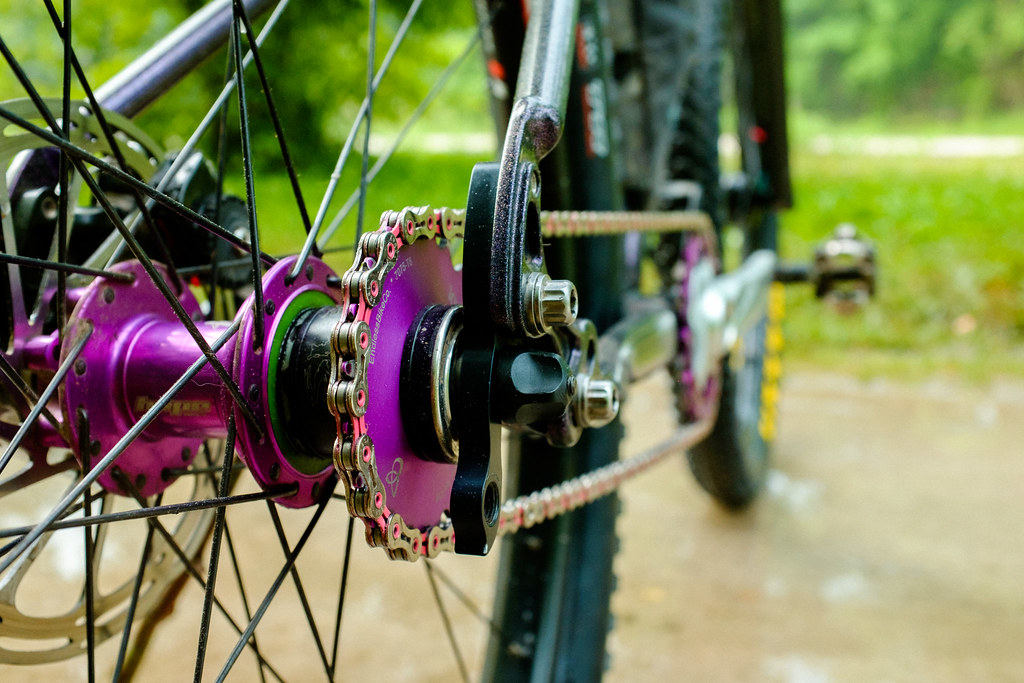 And on the gear choices:

I tried to convince Colleen to ride gears- 1×11 drivetrains are so reliable that at this point, I don’t think there’s any practical argument for single speeding (if there ever was one). Only reason to ride a single speed is that you want to. She decided she wanted to.

I also tried to convince her to let me build a set of light 29er wheels, since that’s the standard for this race. But she’s more comfortable on chubby tires, so that’s what we went with. Those 2.8 Ikons are such nice light tires, I don’t think they’ll slow her down anyway. Flow MK3 rims, because they’re light, tough, and a good width for plus tires- they give the tire a nice round profile, which only lays the center tread on the ground. Corners better, rolls faster.

BB7s because they work, Love Levers because I had a pair of them sitting around. It’s a nice light bike, but it should also be pretty sturdy.

And I made this Etrex mount with a King Cage top-cap mount and a hunk of a cutting board. Kludgy, but functional. 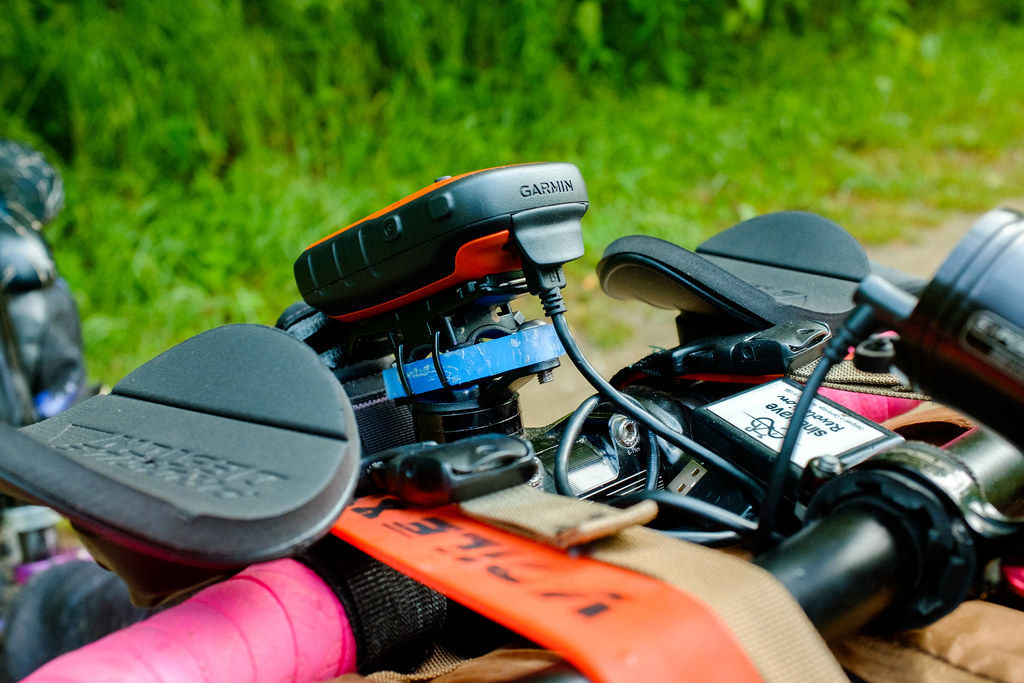 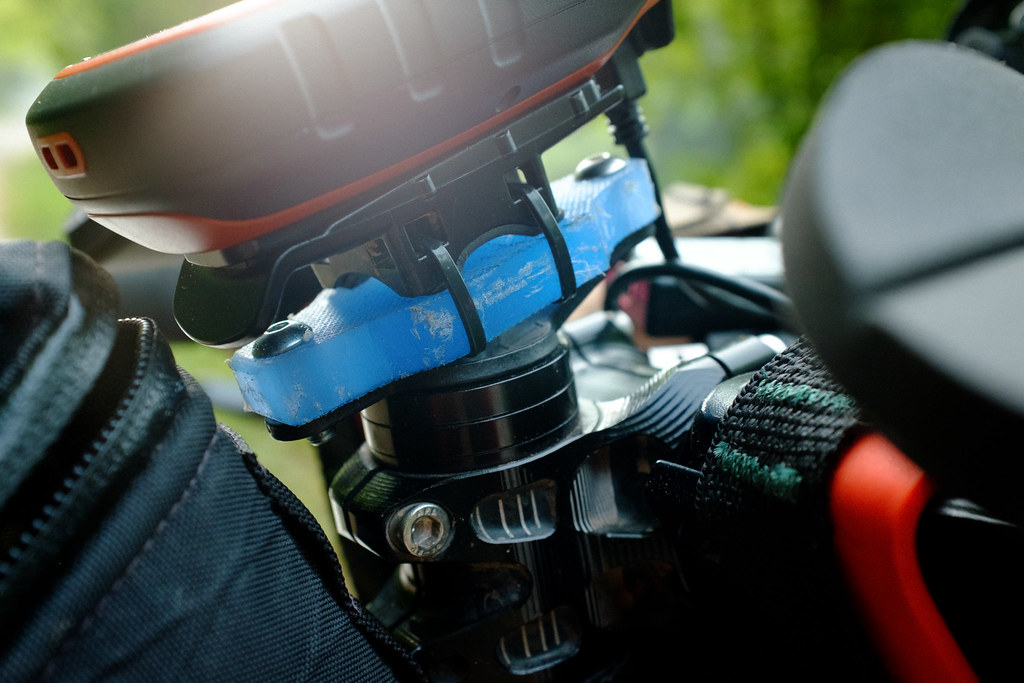 And that’s that, race goes off tomorrow morning. I’d wish her good weather and tailwinds, but fat chance of that, so instead, I’ll just hope that she beats Gary Johnson.

4 thoughts on “Colleen and the Big Race”