Milford, Doubtful Sound and Fiordland were out— we came to a pretty easy consensus on that. The last couple weeks in high and dry Otago had been so nice. No sandflies, fewer camper vans, almost no tour buses. And going back over to the fjords would be diving back into the wet, itchy, selfie-stick nightmare. So on to Invercargill.

“Invercargill— we be going to Invercarrrrgill,” I said, drawing Invercargill out in my best pirate voice (because I thought it sounded like a pirate word).

“Not ‘till we make landfall in Invercarrrrgill,” I said, continuing to use my pirate voice.

I was really excited for Invercargill, hoping for a bunch of rusty corrugated buildings, maybe some industry, people who actually lived there and had families who lived there. All the stuff that makes a real town.

So we spin down the highway, a tailwind blowing us south. That couldn’t happen often, going to Invercargill is clearly meant to be. Check around at the three hostels in town, all full. That’s fine, maybe all the partying German teens will be contained there. We find a campground with a little corrugated shed masquerading as a cabin (the town really is full of rusty corrugated stuff), and pay for a couple nights.

An orange street cat jumps in through our window that night and curls up on the foot of the bed. 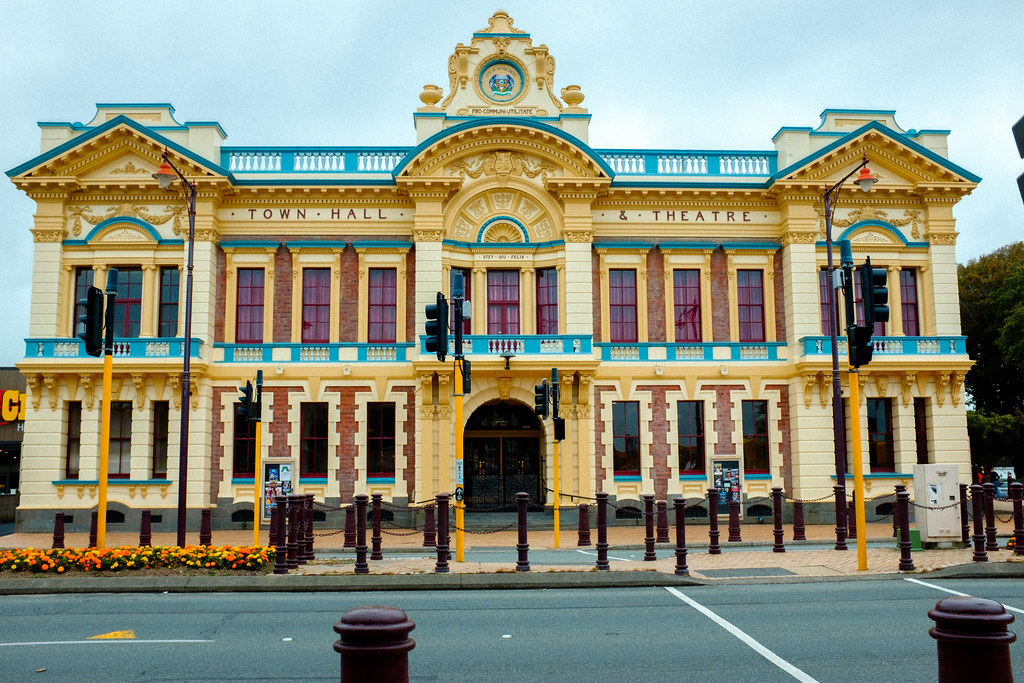 The next day we walk out to see the sights. The wind is vicious and cold, drives rain straight through our plastic jackets. Everything is grey, rusty. Dark damp buildings (excluding that happy yellow one pictured above), orange railroad tracks, gnarled old trees and a big grey-green garden in the center of town, little purple flowers try to hold on. Drivers accelerate to run us over when we step in the crosswalk, the Liquor Land is the busiest store around. It’s perfect.

We go to see Burt Monro’s Indian, which is displayed in the town’s hardware store. 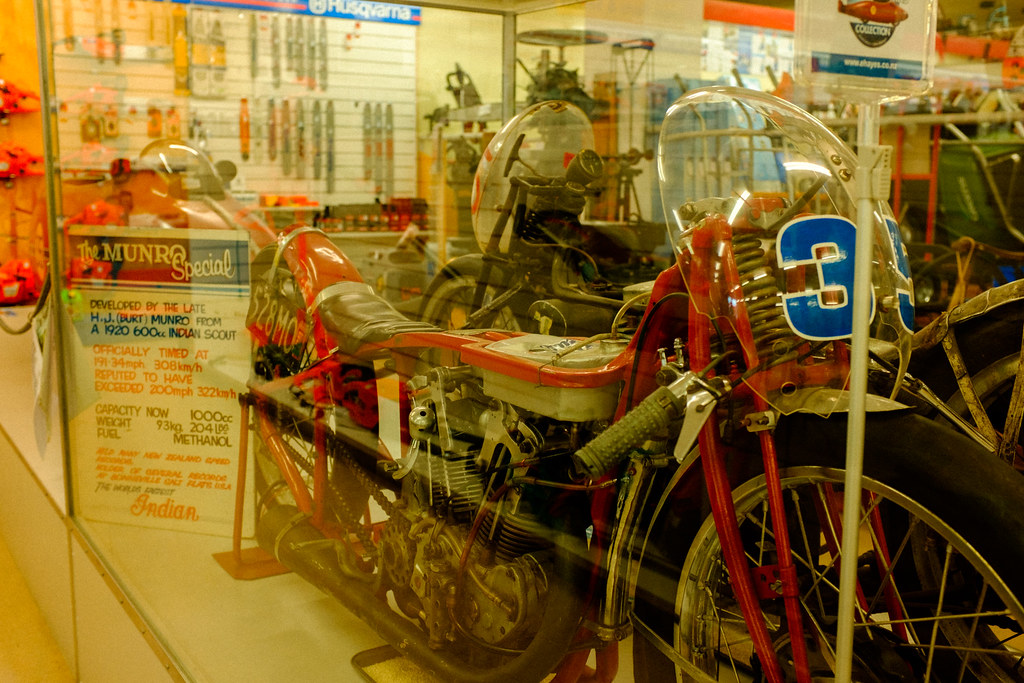 I have a little semi-spiritual moment. This is one of the coolest things I’ve ever seen. This little bike (a 1920 Scout) originally had a top speed of 55 miles an hour. A guy spent years in a shed fiddling, filing, tinkering— cast his own pistons, shaved the tread off tires, completely rebuilt and perfected the bike a little piece at a time. And ended up with a machine that hit 205 miles an hour. No specialty mail-order parts, no internet forums, no big money sponsors. 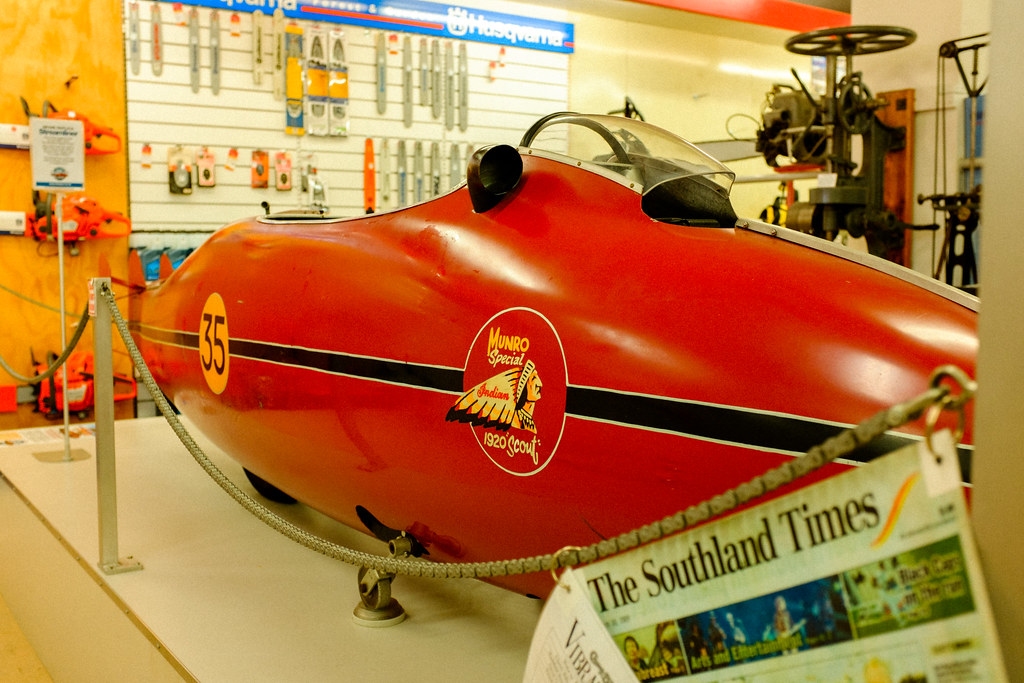 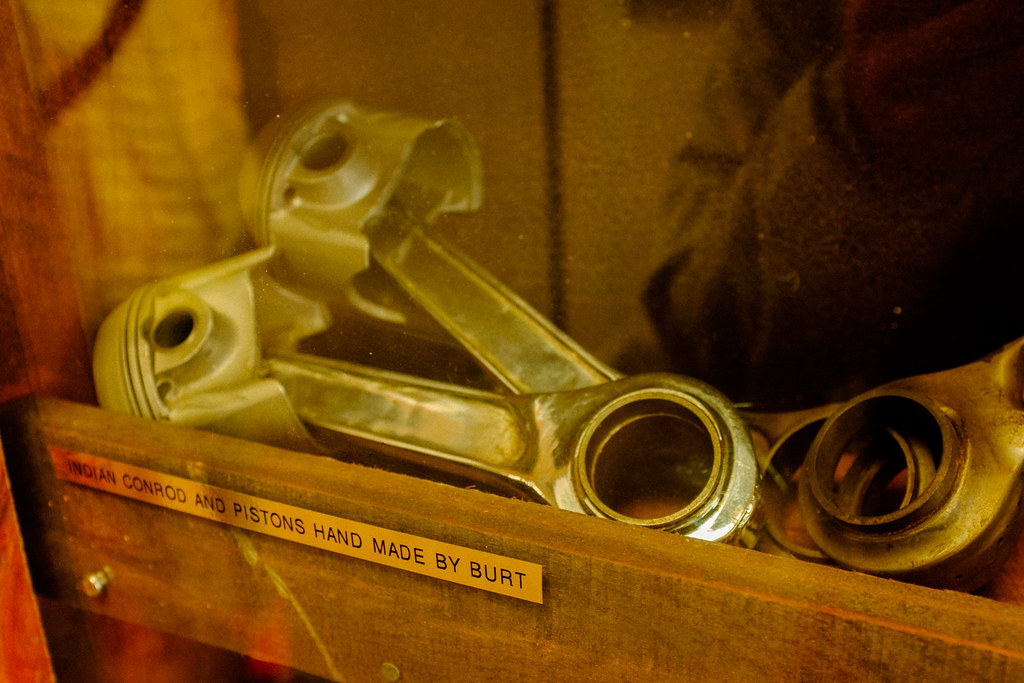 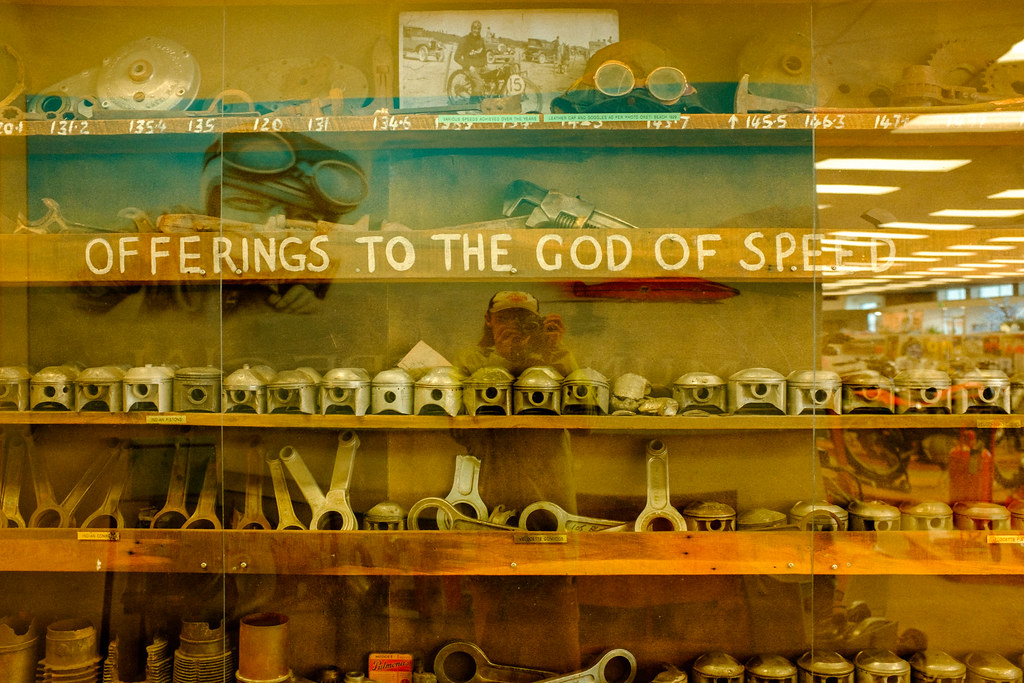 All in this grey little wind-blasted town on the bottom of the world. If that’s not inspiring, I don’t know what is. 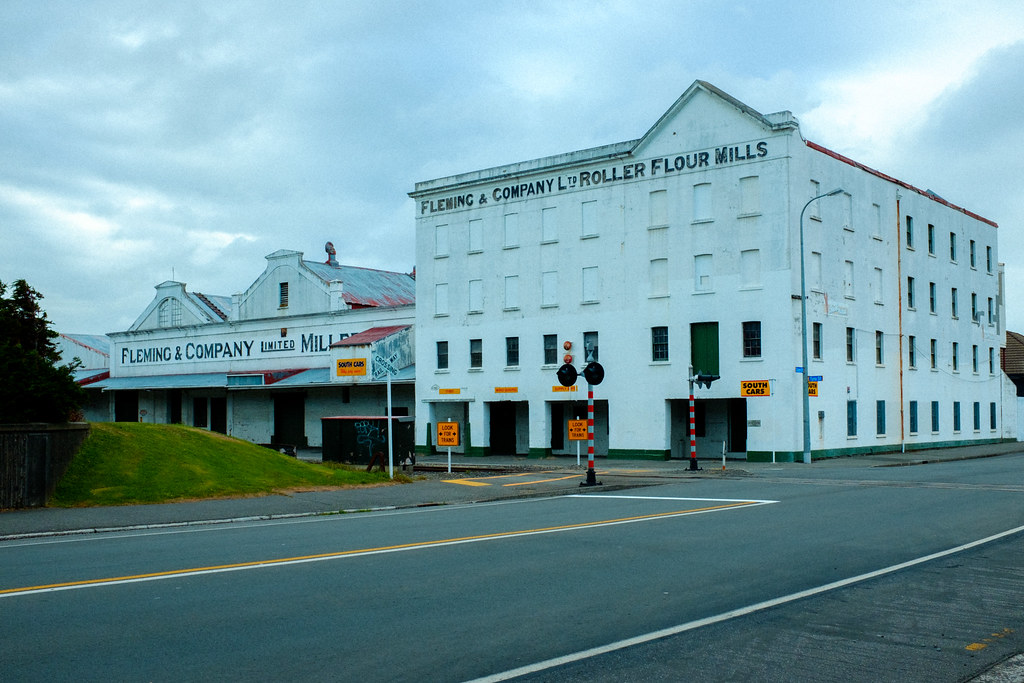 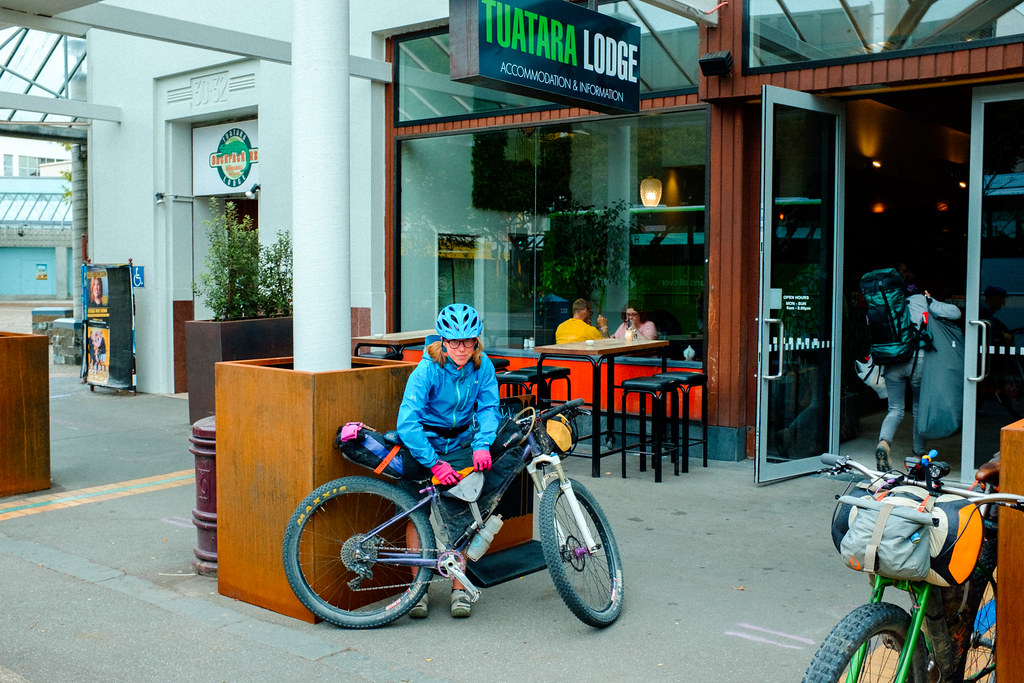 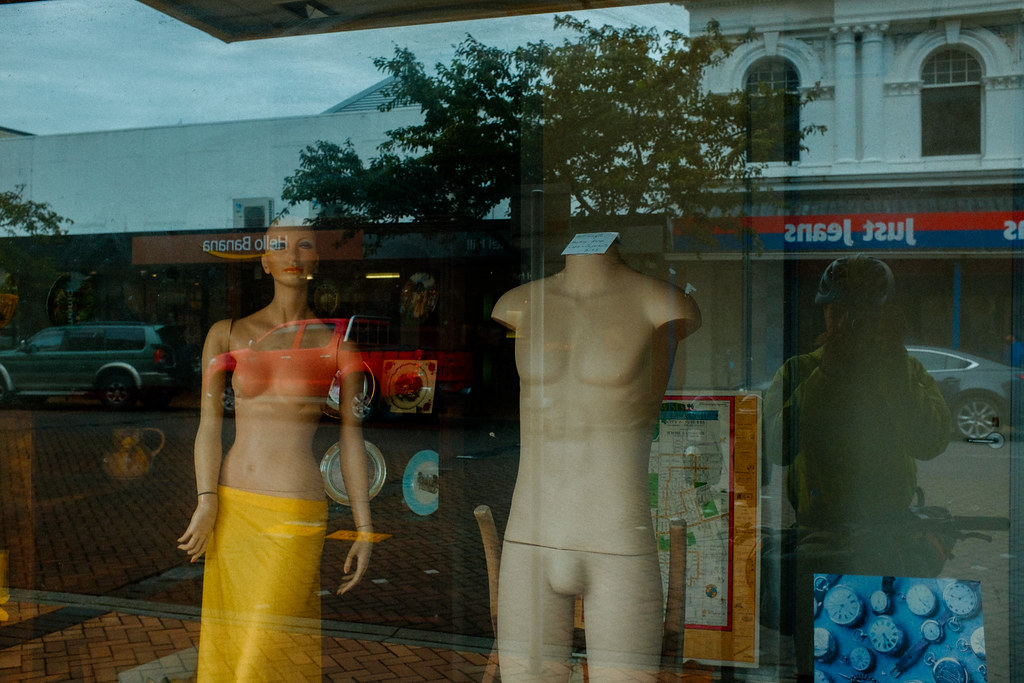 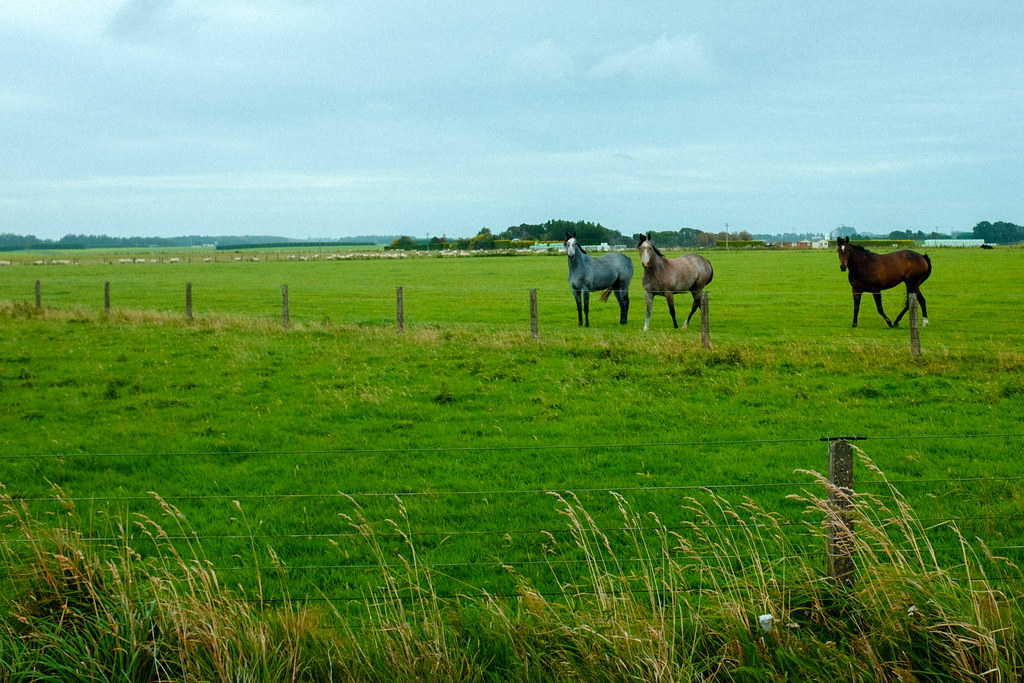 After a couple days we leave town, the wind has shifted to the usual direction and blows us north to Gore, which is another town that I’m excited for, because it’s supposedly the Country Western capital of New Zealand (what does that mean?), it has a giant trout statue, and it has a violent sounding name.

But first, a flying fox break. 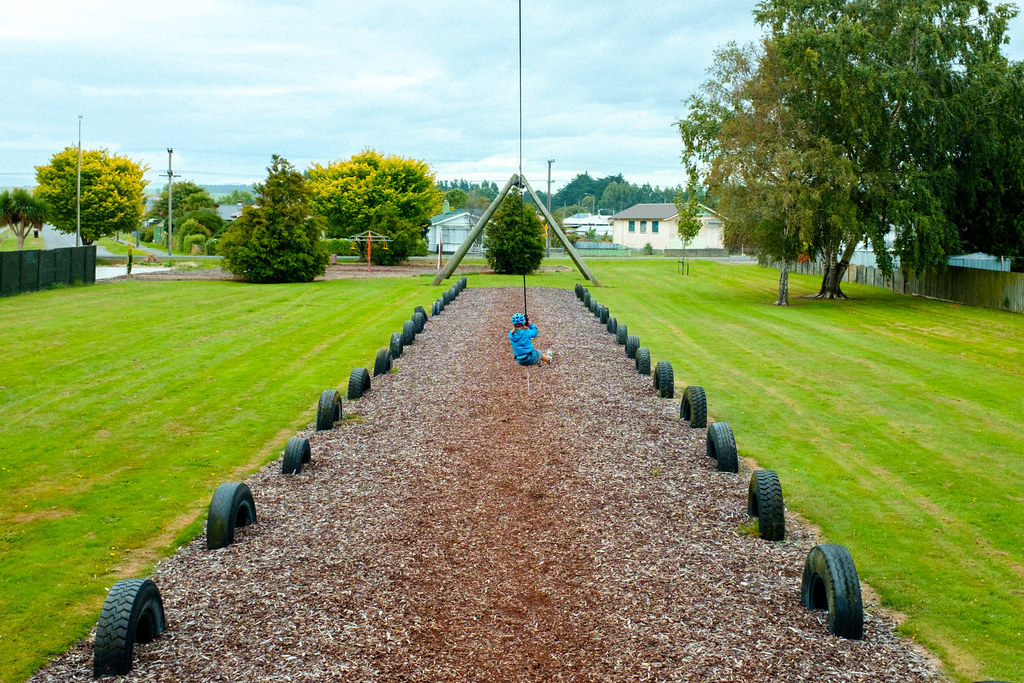 Sister city of Tamworth! Could things get any better? 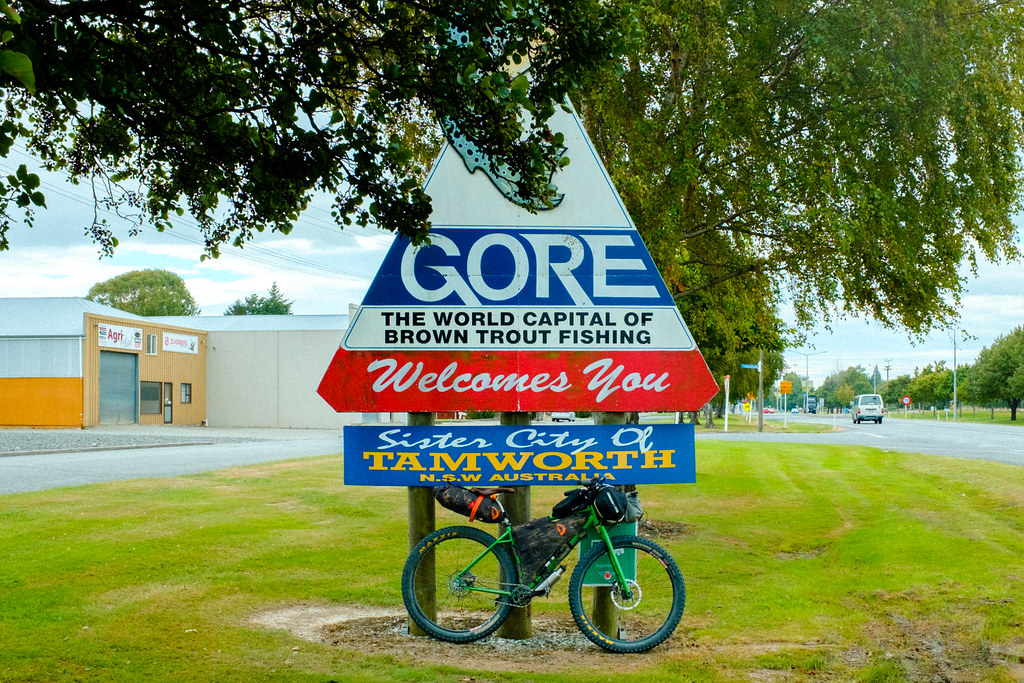 Things could, and do get better- the trout statue is truly giant. 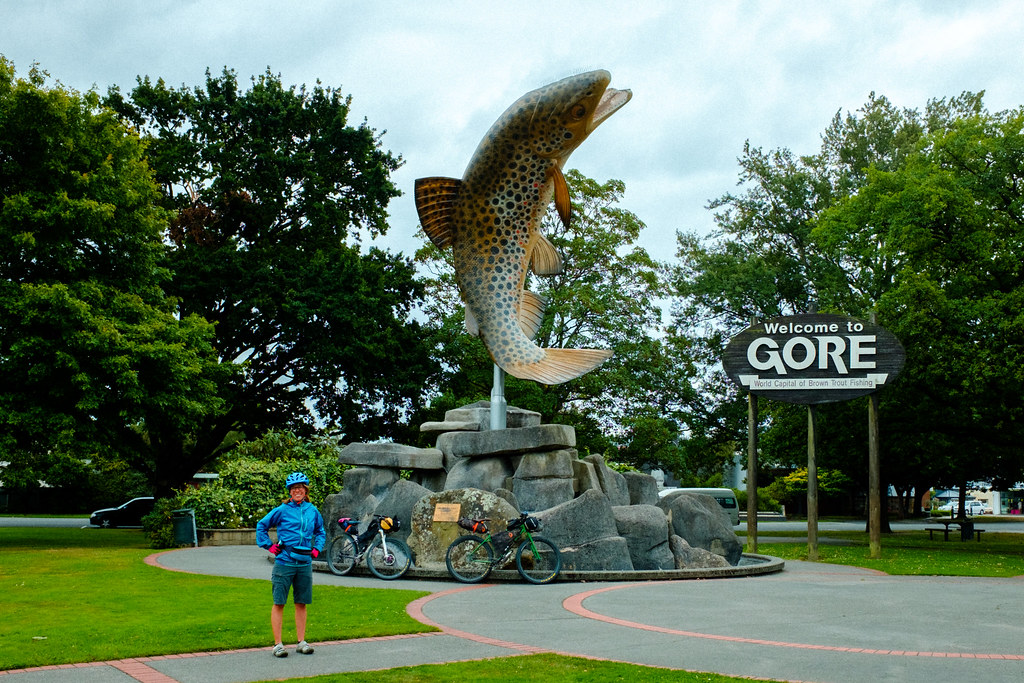 It is the (maybe self-proclaimed and lacking much competition from other towns) New Zealand Capital of Country Music, and has a giant guitar to prove it. It also has the Golden Guitar Competition every Queen’s birthday weekend, which doesn’t sound like the most country weekend of the year, and also the Freeze Ya Bits Off Busking competition, which has a good name. 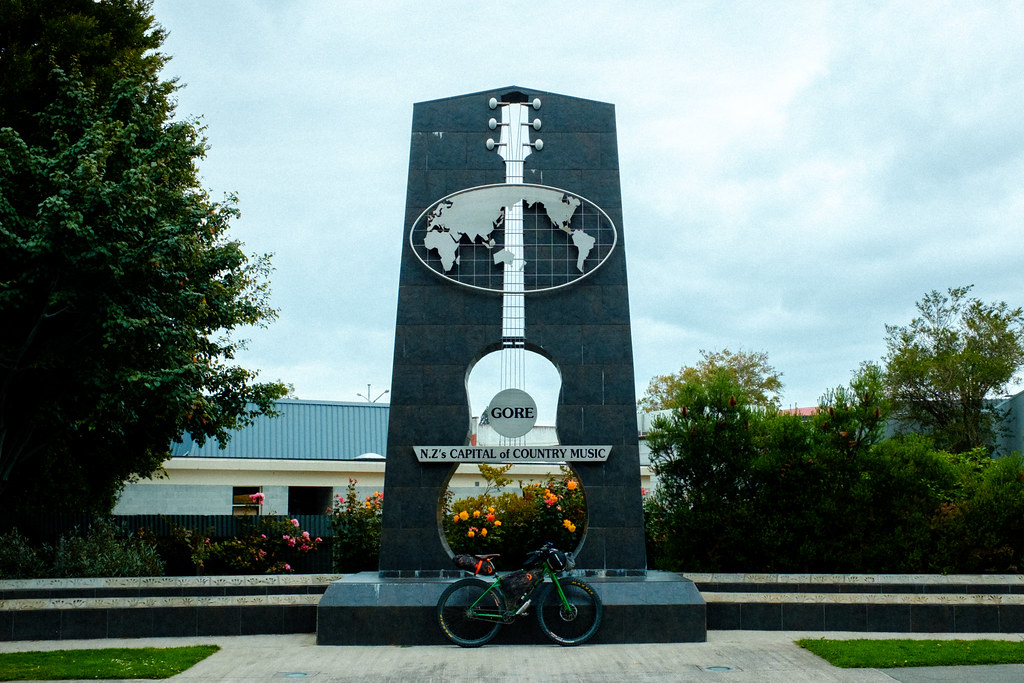 That night, we’re in the campground kitchen. A Maori guy is outside, aggressively pulls on a cigarette. Hood up, black cap pulled low. He swings open the door.

“You’s mind if I turn on the TV?” he yells, a little angrily. Colleen is on the couch reading, I’m looking at something on my computer. No, go for it. He asks where we’re from.

“So what do you think of your new president?” The usual question. Colleen kinda grunts (but not really, she’s too cute to grunt, but she makes a noise that expresses a similar sentiment).

“I don’t think much of him so far, but I guess we’ll see.” My usual answer. The guy swings a chair in front of my table. Stares, smiles. Actually more bares his teeth than smiles. He sets down his Jack Daniels bourbon and cola (in a tall can like an energy drink).

“Bru, I’ve met two Americans in my life. Tell me what you believe in.”

What I believe in? I shut my laptop. I’m sure I believe in something, but man, when you get hit with that question so directly.

“What do you mean?” I know what he means. I’m stalling. I wish I had some sort of dogma to fall back on.

“The idea box there,” he points to the TV, “it tells me to believe things about you. And you know, it makes me want to come in here, and be like, ‘piss off bru,’ you know? But I come in, instead I ask you what you believe. I sit down, and that attitude that I’m projecting, it reflects off you. And I’ve built a bridge, started a conversation. So tell me something you believe in.”

Think of something that doesn’t sound dumb. “Well, I think a person shouldn’t be measured by how much they own,” I say. They should be measured by how many followers they have on Instagram. No, come on, have a conversation without hiding behind your cynicism.

“Yeah? That’s interesting, because it seems that in your country, money is God. ‘In God we trust,’ it says so right on your bills. So how do you value people then?”

He asks what I do, I tell him I fix bikes. “And you can do that, come over here, ride around for months. You know bru, I think that’s like magic. I wish I could go to your country and do that.”

Colleen pulls up a chair. “Have you ever left New Zealand?” she asks.

“No,” he takes off his hat and rubs his shaved head. “No, I trace back 63 generations on my mother’s side, 31 on my fathers. I’ve got cousins everywhere. I think, if I left, I’d feel lonely.”

He looks at Colleen. “You, you’re sparkly. I can tell, just fresh and happy.” Turns back to me. “But you, you’ve seen the darkness,” he dips his head, like he’s looking for a different angle into my eyes. “You haven’t been in hell, but you’ve seen it— you know it’s there. I can see that in you bru.”

I don’t really feel like continuing the conversation that way.

“But listen to me, I sound like Dr. Phil.” He kinda smiles again. “Bru, do you believe in energy? That people have an energy?”

“Maori teachings— I don’t know how to explain in Pakeha,” (pakeha is the Maori word for foreigners, Europeans). “Hold out your fingers, next to each other, then look at me.” He moves his hands around my fingers, circling closer, I’m not looking at our hands. “Now look at your fingers bro.” I look down, they’ve moved away from his hands, away from his energy I guess. “You see what I mean?”

Colleen goes to bed, I go back to my new friend’s campground cabin to talk more. It’s pretty late now, he squints out the window as he talks.

“I’ve been reading, trying to find a Pakeha explanation. You see, we believe in the balance of energy. Love and hate, male and female, yin and yang. If you believe in one, you have to believe in the other,” he looks at me. “Listen to me talking like this bru, I’m not usually a guy who talks like this.”

He fiddles with a dollar coin. “So everything has two sides, like this same coin, and you have to keep it balanced to see both. Sometimes, people let the coin fall, and then you can’t see the other side. You can’t answer hate with hate. You have to understand, see both sides, keep things balanced.” He pauses. “Why don’t you tell me something bru?”

“You know, I reckon a person is like a vase, you fill them up with experiences, then when they’re all full, they have something to share. Maybe you’re still filling up bru,” he says. “Ask me about something else.”

“Why are you living in this campground?”

“Ah, bru. Long story.” There was a party at the house where he lived with a few friends, “the party flipped,” his friend stabbed someone else in the neck. He was already on probation for fighting someone who tried to steal his greenstone, he knew the guy had it, could feel the energy. So, he couldn’t leave Gore, this campground cabin was the only place he could find to live until his court date. “So bru, if the cops come, you have to hide that whiskey bottle, and keep quiet. They just come to make sure I’m in here.”

He changes the subject again. “Bru, I told you I trace back 63 generations. You told me you don’t know anything farther back than your grandparents. You’re not American, that’s not a history— you have to go to Europe, see where you’re from, see who your people were.”

“Then you need to tell me about it.”

The door slams open. “There’s my Maori man!” a real drunk girl yells. “And who th’hells this?” she says at me.

“Shh, shh, don’t bring that world in here, don’t yell. This is my friend Montana from America.”

“Hiii America, how’re you?” she slurs.

Alright, looks like it’s time to go. I say goodnight, we do the Maori nose press thing, because we’re friends now, trade hats, I leave with my whiskey bottle and a lot to think about.

Crawl into the tent, ride out early the next morning towards Dunedin. 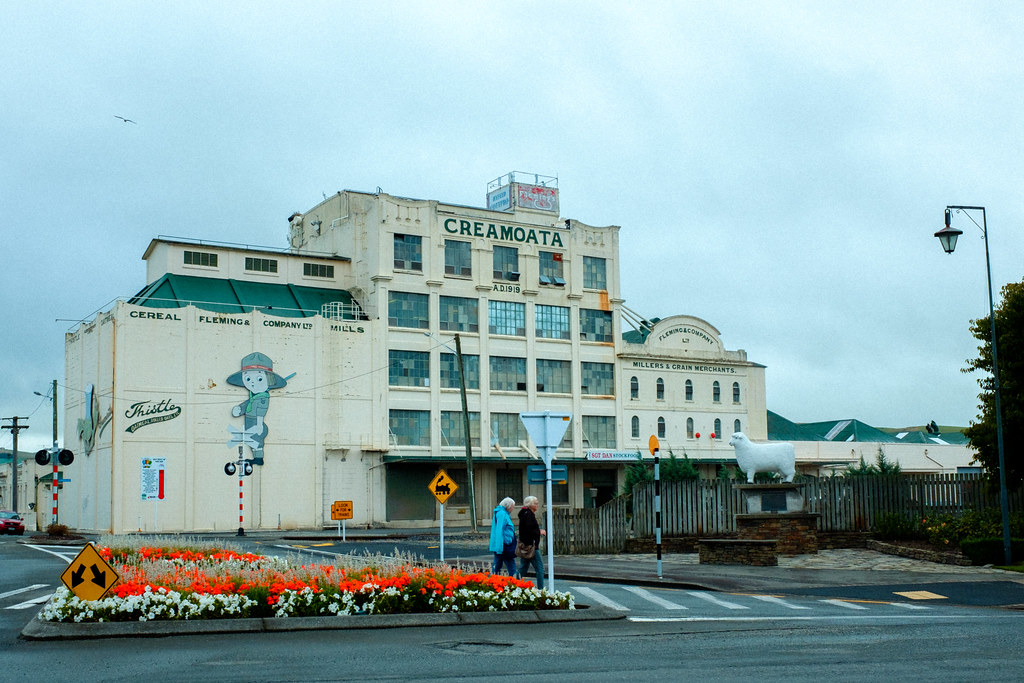 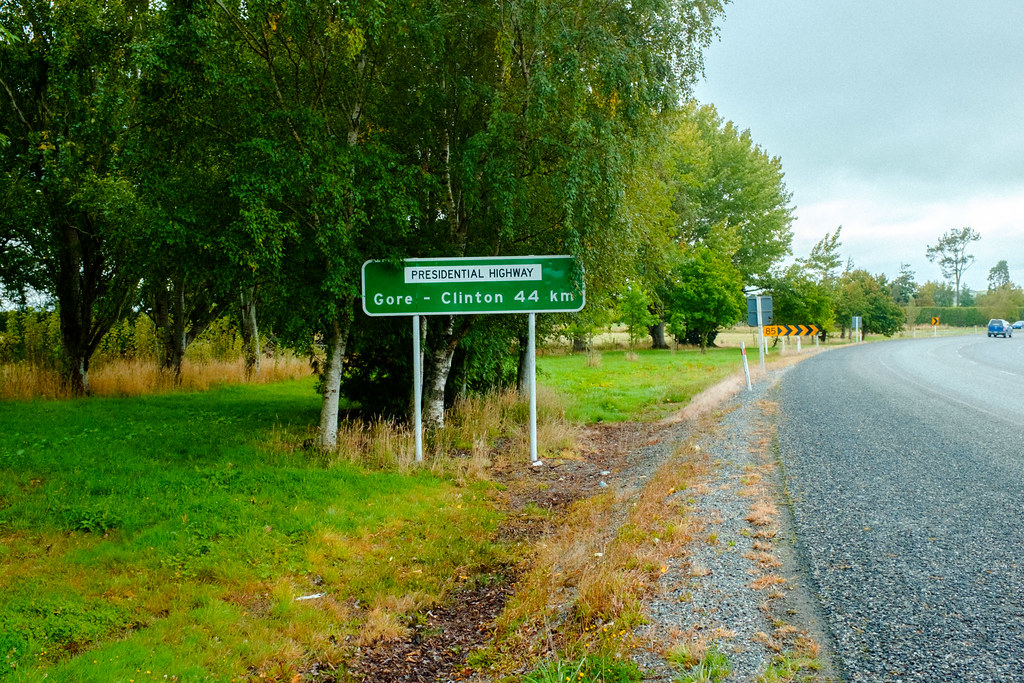 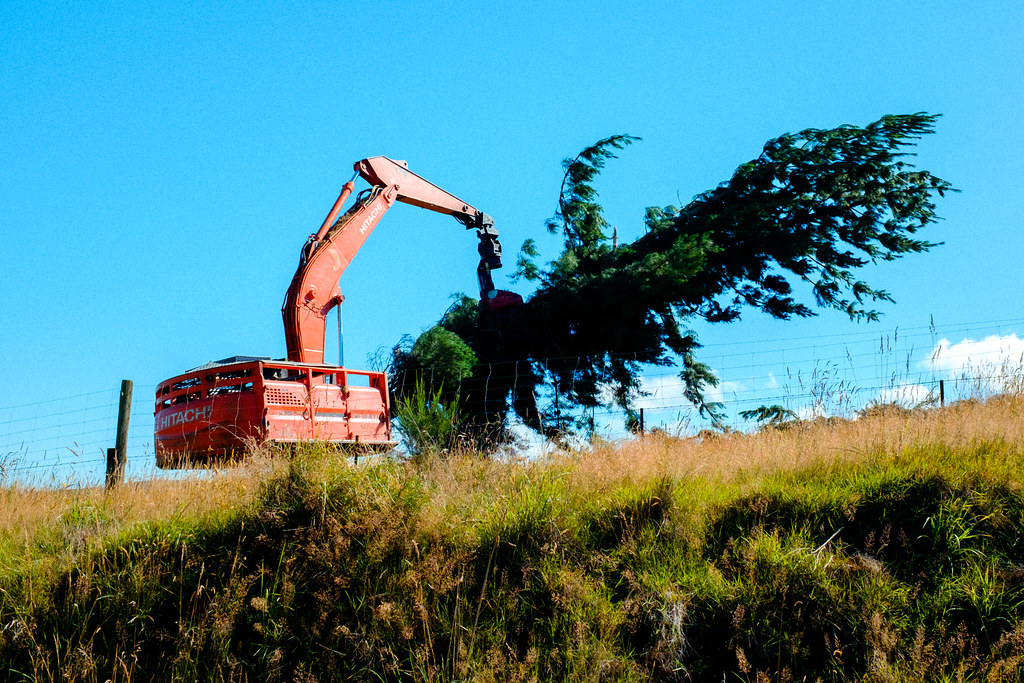 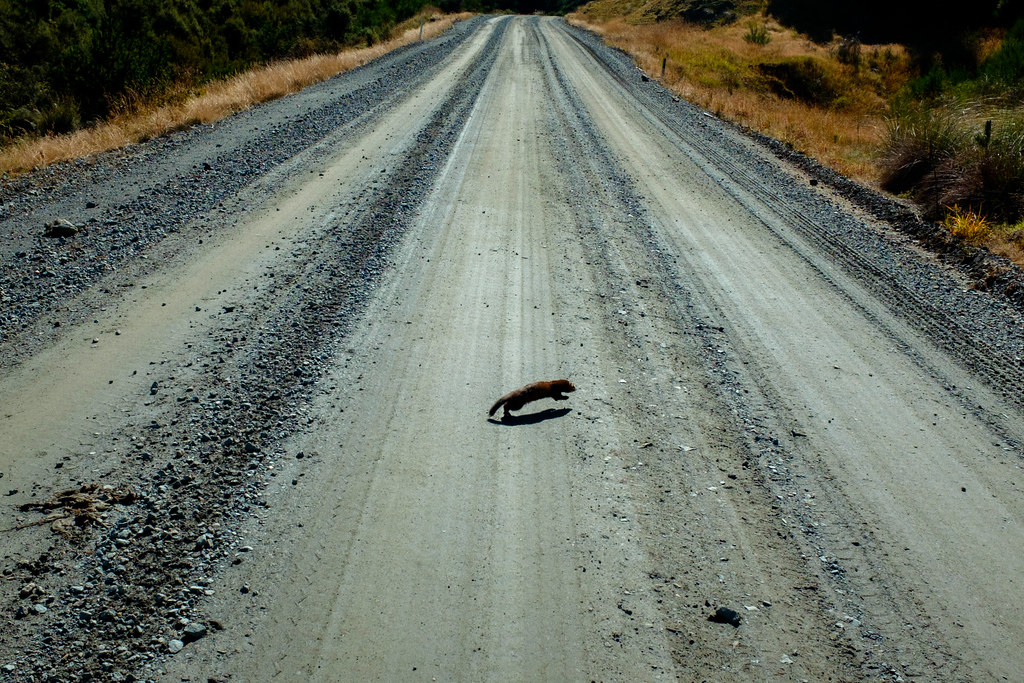 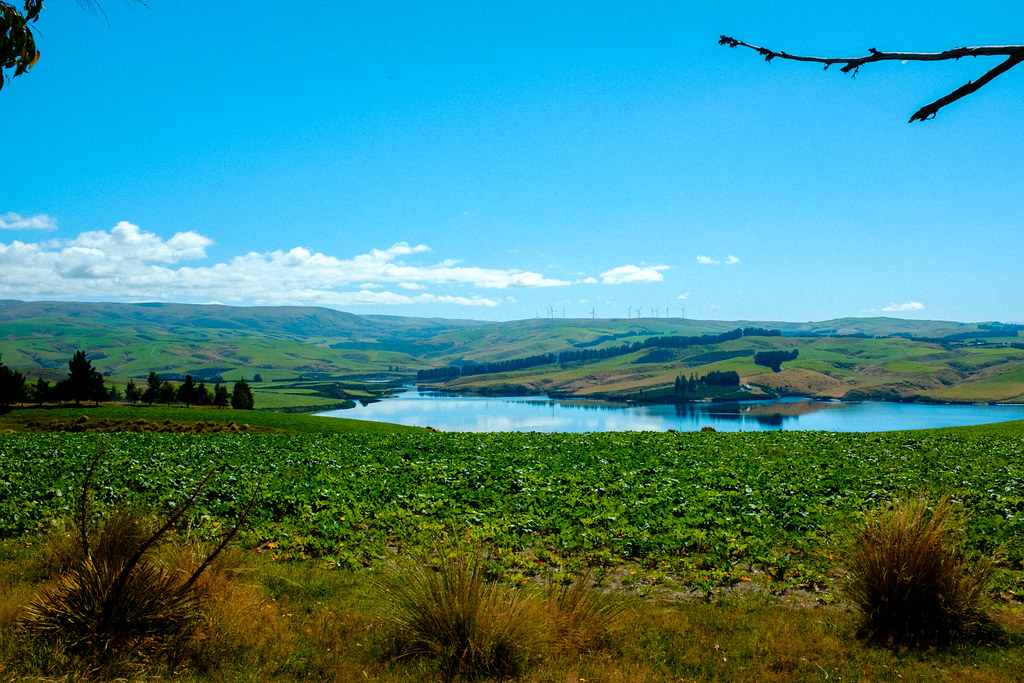