The cards fly past Colleen’s head, she ducks.

“Ooh, sorry bru. Been trying that one seven years, still can’t get her right,” says our new friend. He’s smelly, dreads, shoeless but wearing a shirt that has a picture of a gumboot. Just came down from some music festival out in the bush in Karamea. We’re eating dinner at the bar (and only business) in tiny Seddonville. Blue carpet, pictures of long-closed mines and long-dead miners on the walls.

He plops down in the chair next to me. “So, I’m out of money and gas, and now I have to do card tricks in this bar in Seddonville until I can pay for fuel to leave.” He sighs, and stares at me. Intense blue eyes. A real focused, crazy conman dirtbag.

“That’s rough man,” I say, and finish my Speights. Especially rough since there’s not a place to buy gas here.

“Well, here, let me show you how I did that last trick.” He jumps back up and tells me to pull out a card. Man, if he’s looking for a tip, he’s at the wrong table. I’ll give a few bucks to a good musician, but not a bad magician. Not that he’d do better with the farmers at the bar with their pants tucked into their socks.

Finally he gives up on us, realizes that we’re not going to buy him dinner. He runs out to his van, then fast walks back in carrying a ham sized rock.

He drops the boulder on the bar. The barman, Graeme, who’s a real stern, short-short wearing, ex-rugby-playing sort of kiwi bloke (I know his name’s Graeme because it says so under the menu in cursive “your gracious host Graeme and-“ the second name is whited out- divorce, death?), is not impressed.

Actually, the merry prankster might as well have set a heap of cat turds on the bar.

“It’s neophyte.” That’s not actually what he called it, a neophyte is another thing. But I’m not a geologist. The prankster stares with those crazy blue eyes.

The prankster starts to argue, but stops. Maybe he finally noticed Graeme flexing those thick fingers, or maybe he read the sign behind the bar that says “The barman is always right.”

“Ugh,” he says disgustedly, heaves the rock away, and turns to the guys playing pool. “This for a dinner? It’s neophyte.”

“Unbelievable,” he spits, and shakes his head like these people are the most ignorant saps in the world. The riches of neophyte, for just a dinner. 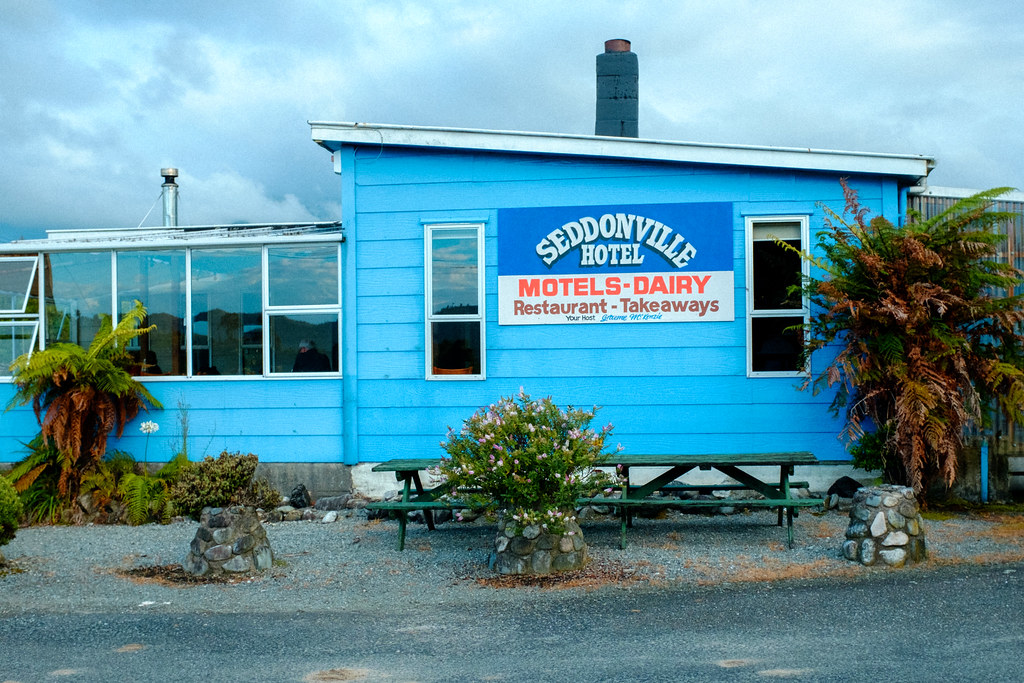 Done with dinner, we’re talking to a mountain biker from the Czech Republic outside, that just finished riding the Old Ghost Road. Our shoeless friend returns, driving his van (must have had some gas).

There’s a hawk hanging off his bumper. He hops out of the van.

“Is that a hawk hanging off your bumper?” I say.

“Mate, great tip. You see a road kill hawk, pick it up.” he grabs the hawk, spreads one of the dead feet. “Put a marble in it’s talon, then cut the leg off and put it in salt. The foot will shrivel around the marble, clutching it.” He fixes those eyes on me, to make sure I understand.

“People.” He stares. This dude never blinks. “People will pay 50 dollars for that sort of thing. That. Is what you do to make money when you’re broke, and you don’t have a job.”

Or you could just find a job and save your money for a while, I think. It works great. Then you don’t have to salt hawk feet.

But “Oh, neat idea,” is what I say. I have a standing policy to lead crazy people on.

“Nah, I’m alright.” I also have a standing policy to abide by the law in foreign countries.

“You already have some?”

“Well do you have any rolling papers?”

Graeme brings a burger out to the other cyclist. “Where’d your little friend go?” he asks me. 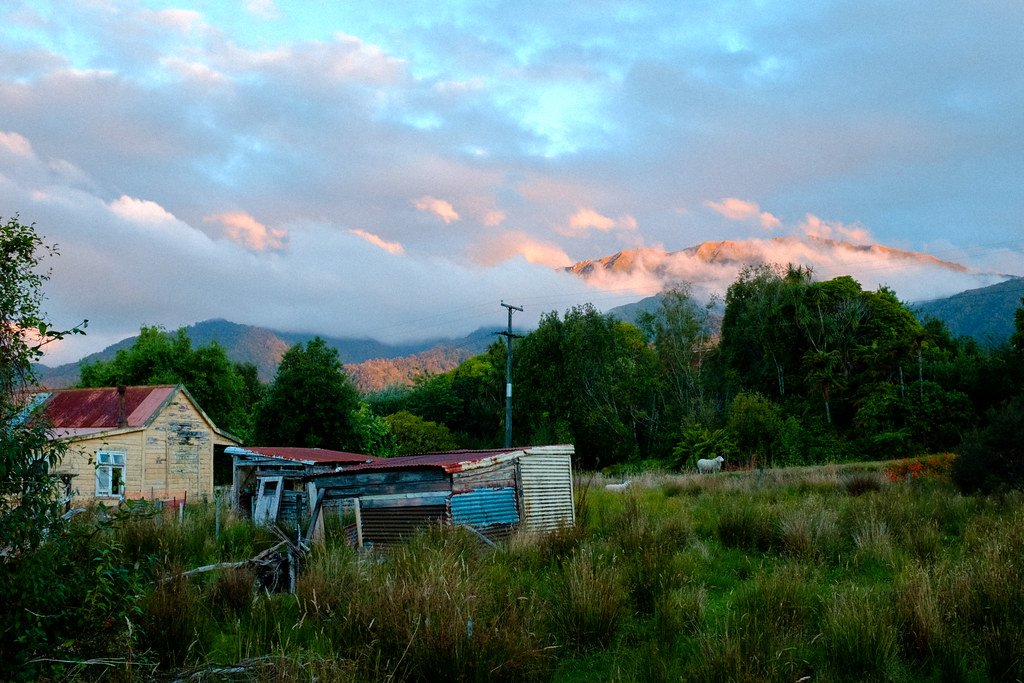 The next day we’re packing up to leave the Seddonville Holiday Park, which is the old school building. The school closed in the 80s because there were only a half-dozen kids in attendance. The park is maintained by the community, probably only five or six families. I ask the lady cleaning up if the Old Ghost Road trail has been good for the town. It’s only been open for a year now.

She sets down the mop, takes a long breath. Sensitive subject.

“You know, we live here because it’s far away from things. And it’s great for Graeme at the bar, and good for the holiday park, but we have 9,000 people a year coming through town, and we haven’t had any help from the trail trust to update our facilities. And all those people, it’s changing the town.”

“But it must be good to have something in town, right?” The Seddonville narrative is a real familiar one- small town in a scenic place, formerly a mining community, mines closed, left the locals with nothing. And now the opportunity to transition to a recreation economy. It’s worked at home in Pennsylvania along the Great Allegheny Passage Trail, more and more businesses open up every year along that path (and I make my living on that trail).

“The mines were good work,” she says. Then she launches into a story about how her brother almost died (29 other miners did die that day) in the mines, and how the mine management was awful, and there was no government oversight. And now the government got involved, and now there’s too much paperwork too much and oversight (but fewer accidents). I’d think that all that would negate her first statement- the mines were good work.

So it’s the same old, even on the far side of the world. The mines were terrible, the mines were the best, bring back the mines. People remember the money, are willing to overlook the accidents, the disease, the miserable work, and the piles of tailings. And they’re afraid of something different, and that outsiders will change their town. 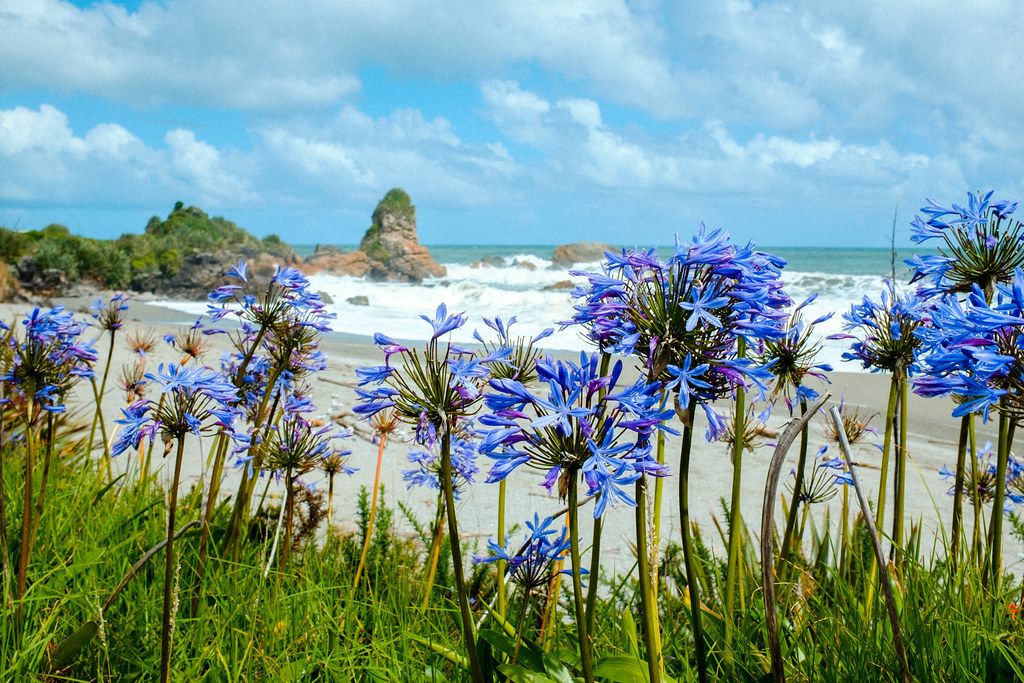 Out of Seddonville, we start our brief pavement interlude. Or, 400 mile stretch of highway down the West Coast, through towns that got over their fear of tourists a long time ago. 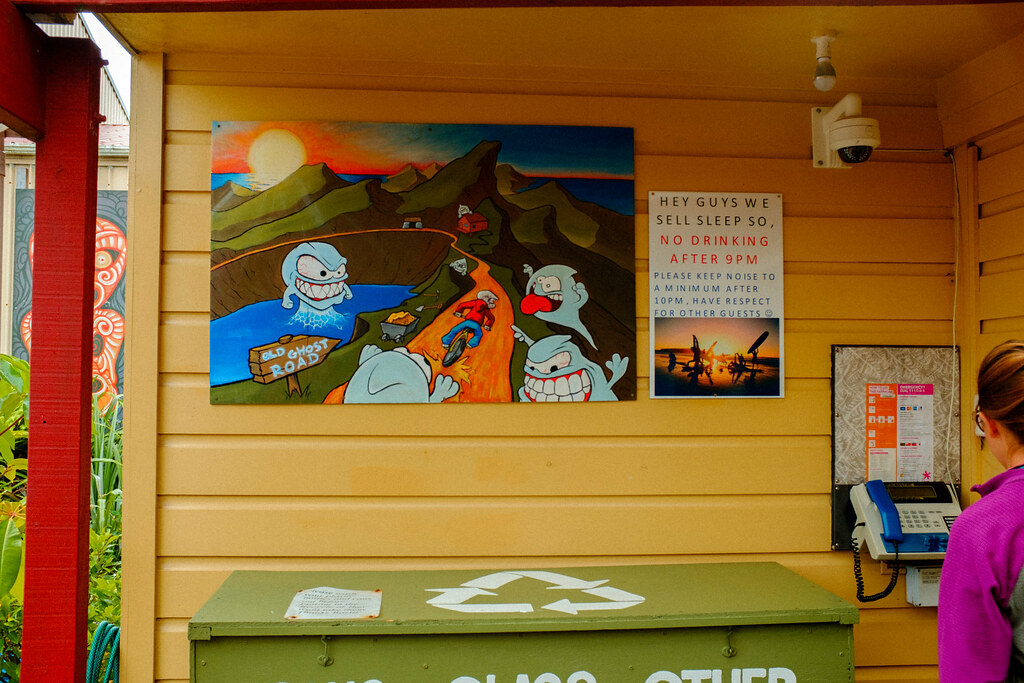 A gale blows in, so we stop in a hostel in Westport for a couple nights. Both afternoons, the Kiwi Experience bus disgorges 50 European teenagers, who immediately get real drunk, make a lot of noise. A fun show.

One night, a group of about twelve are sitting around a table, each with their own bottle of wine. A blond, long-haired, tattooed British cool guy is instigating a drinking game, and playing some trap on his phone.

Then another British kid picks up a guitar, and starts playing the Black Keys, really good. He sings, imitates the accent of a guy from Akron. Which is weird, but we’ve had some whiskey and he really is good.

The cool guy does a Forest Gump impression- I guess because the other kid is singing in an American accent. But all the teenage girls ignore him, maybe realizing that he’s a talentless phony, and keep focussing on the guy playing that good Rust Belt music. The cool guy crosses his arms, and starts to sulk, which I find very satisfying.

Before sunrise, I get up to take a wizz in the unisex bathroom. A couple of teenagers are in the shower having loud sex. The girl’s embarrassingly fake pleasure moans echo off the painted tile and plywood stalls. Jesus. I feel like I’m doing something illegal by just being in here. 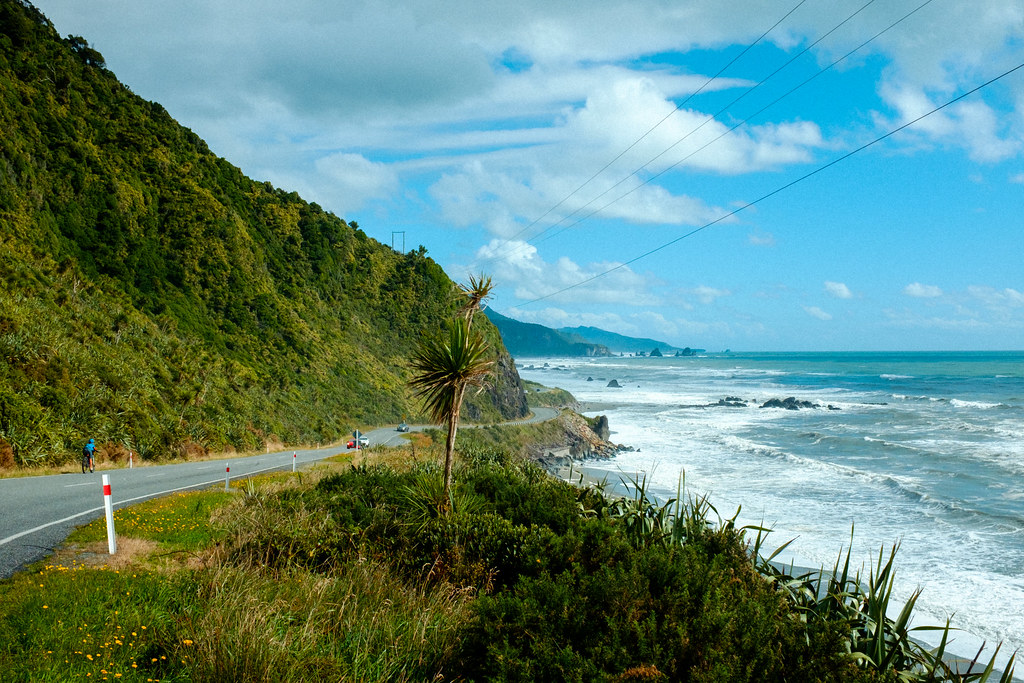 There’s only one way to get down the coast, squeezed between the mountains and the Tasman Sea. And it’s busy.

But there’s short break from the highway, 40 or so miles of dirt on the West Coast Wilderness Trail. Not really mountain biking, not really a road- backcountry bike path. 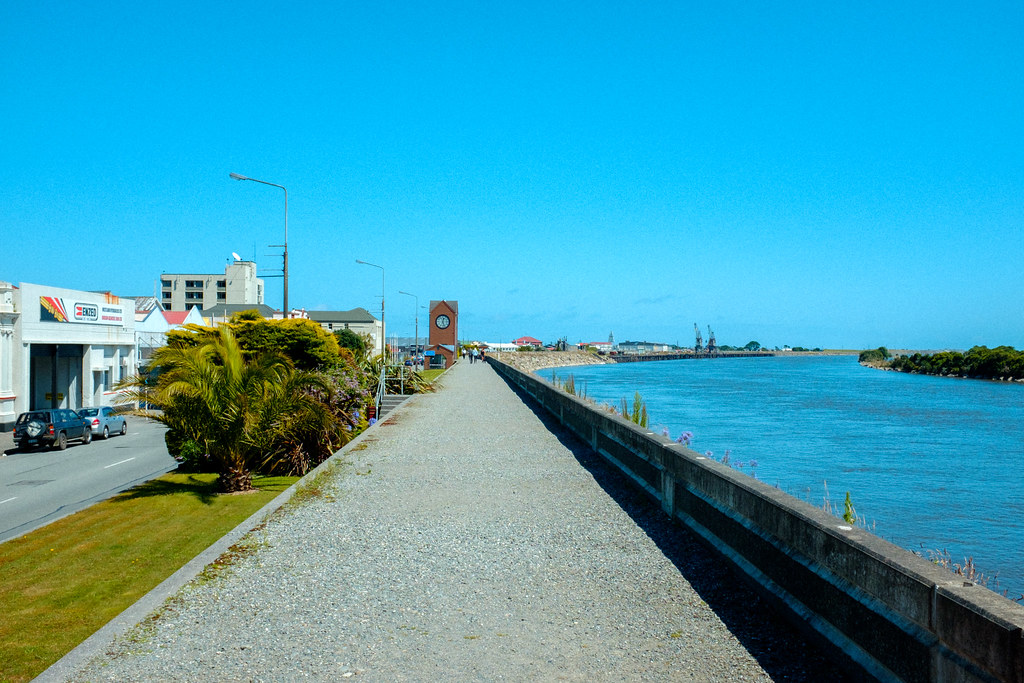 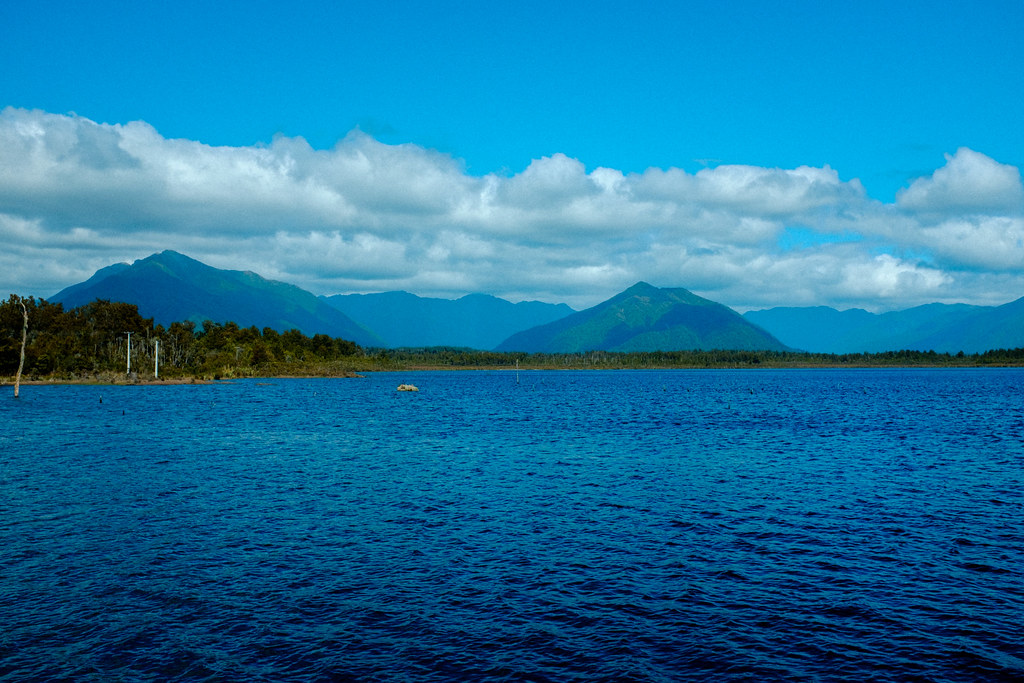 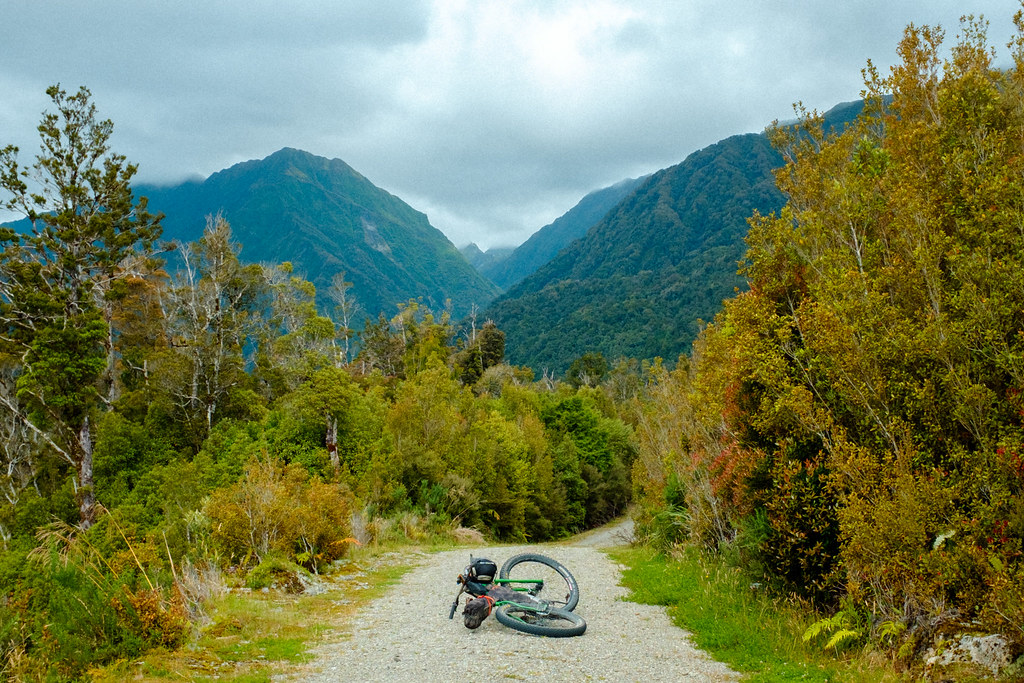 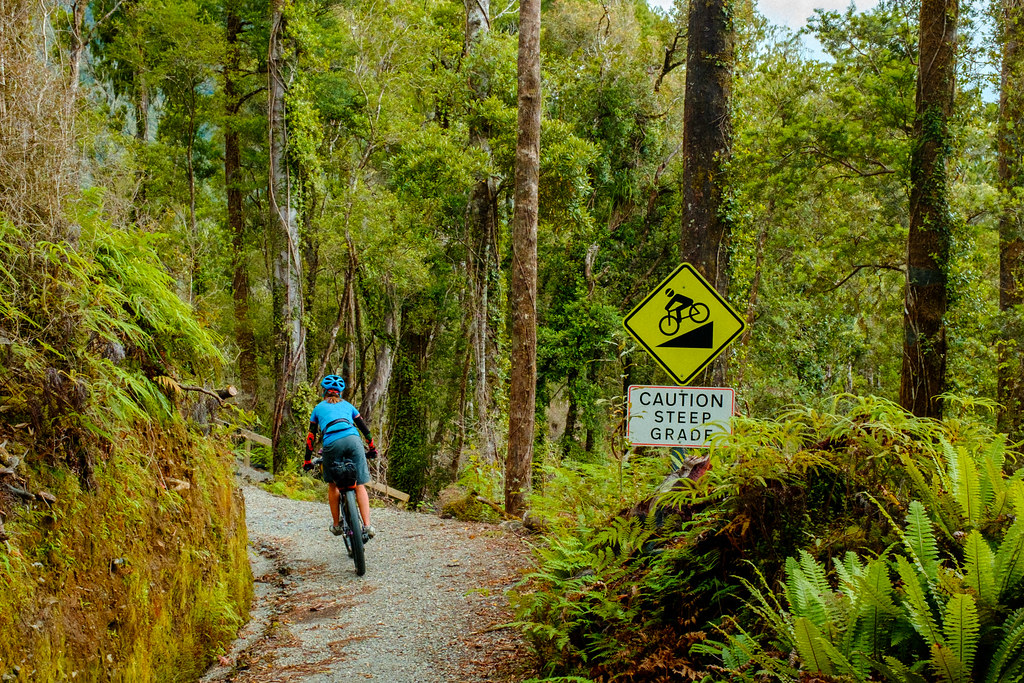 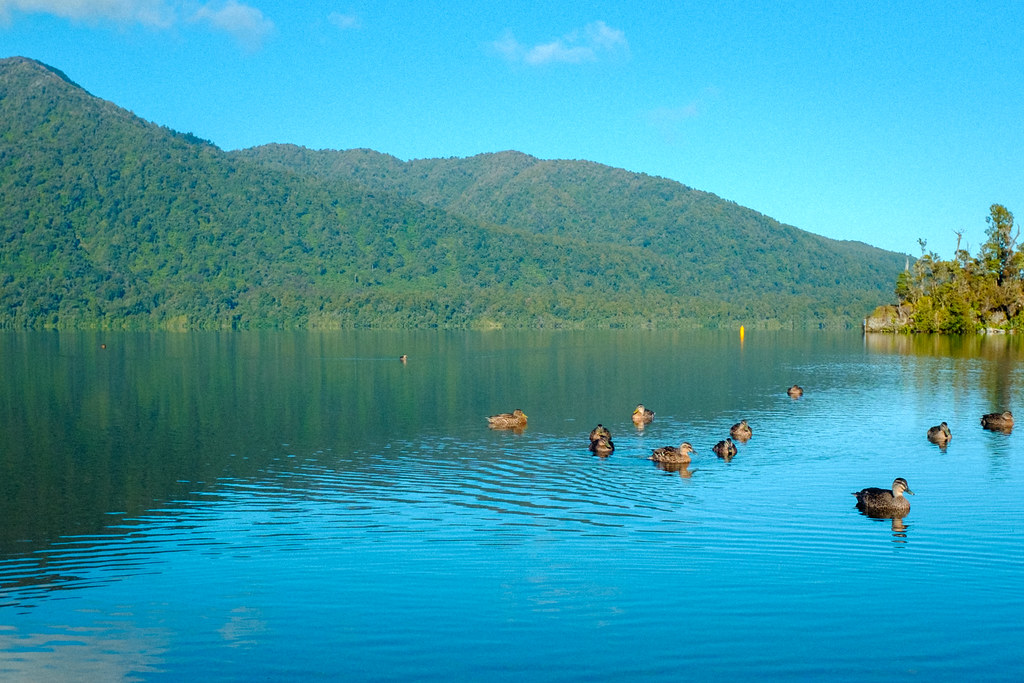 At the end of the trail, we stop at a little bar that allows camping in its front lawn. I click clack out of the bar in my shiny blue SPD shoes. 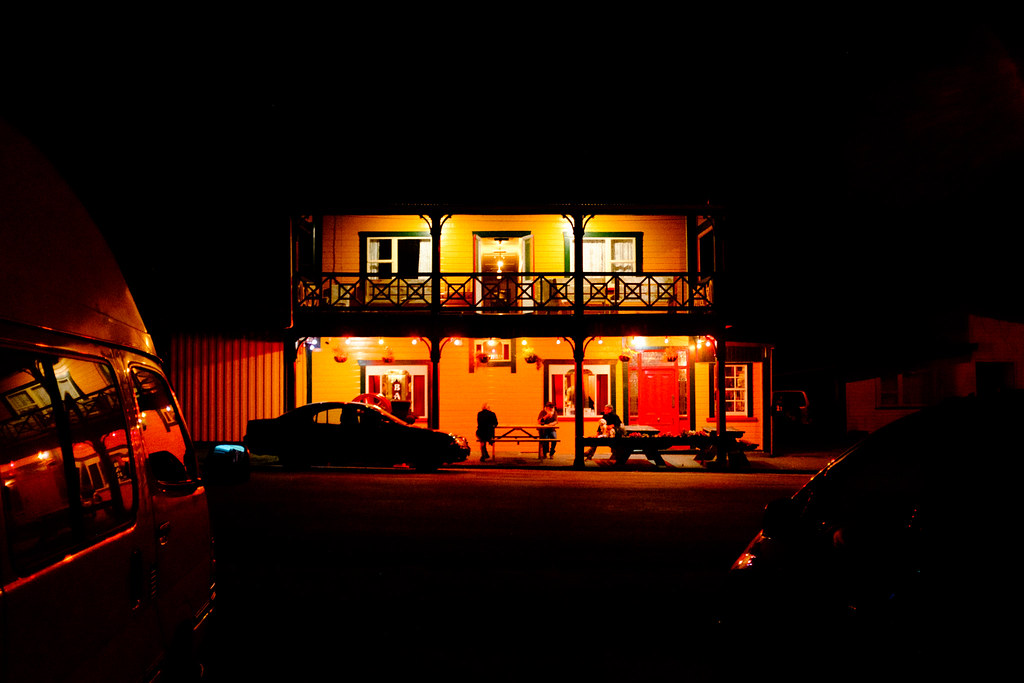 “Sounds like he needs re-shod eh?” says one of the guys sitting outside

“Harharharhar!” say the other four guys sitting outside.

“Heh,” I say and smile, thinking that if they walked up to my local bar in those rubber boots and short-shorts and stripy rugby shirts that they’re all wearing (the NZ blue collar uniform), I’d heckle them too. So it’s all good. 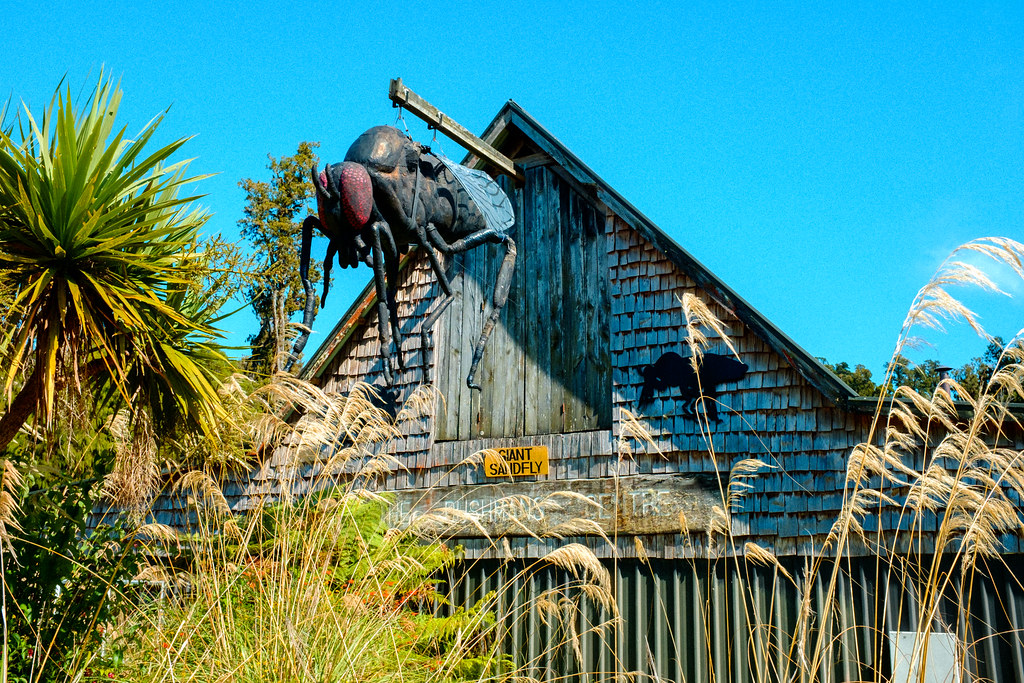 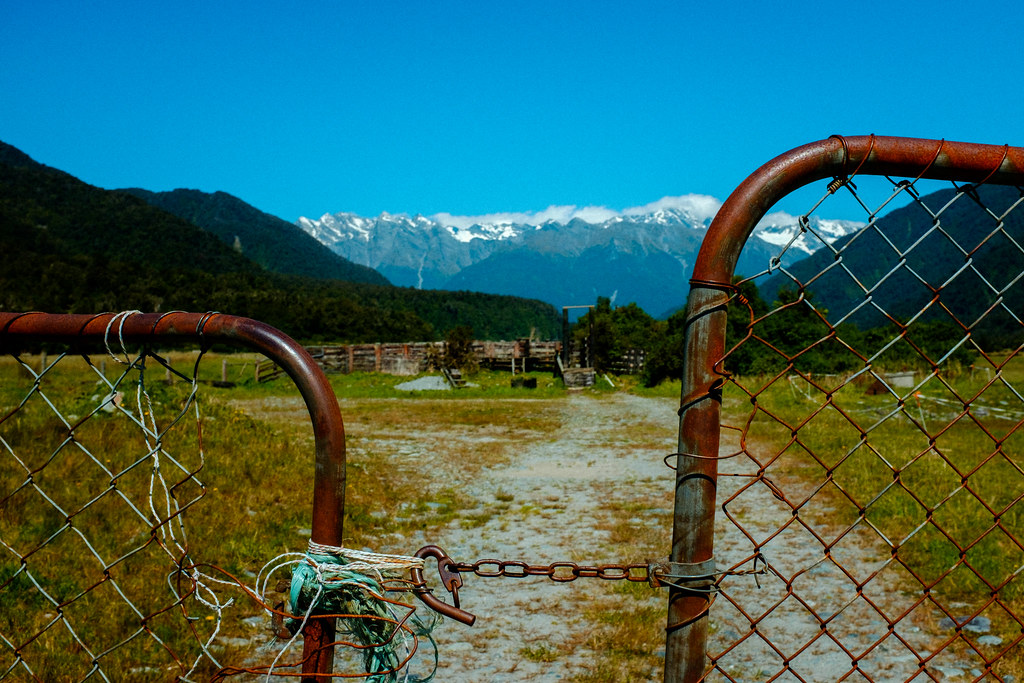 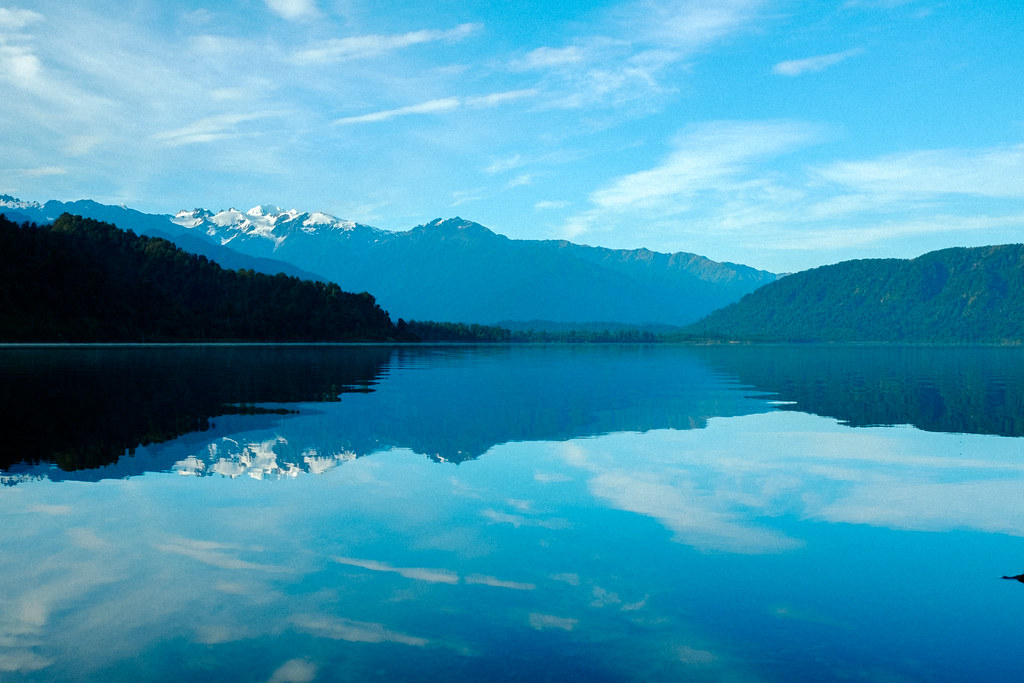 In Franz Josef and Fox Glacier, constant helicopter traffic- and $400 per person for a 40 minute ride. At least four thumping around in the air at all times, sunup to sundown, giving people a view of the rapidly retreating ice. 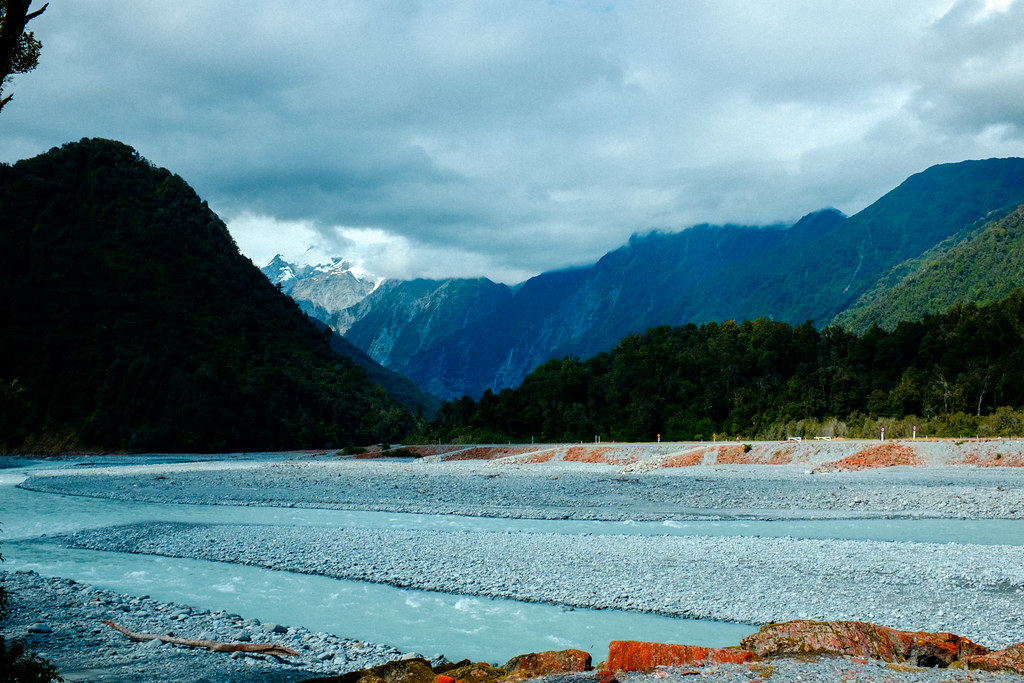 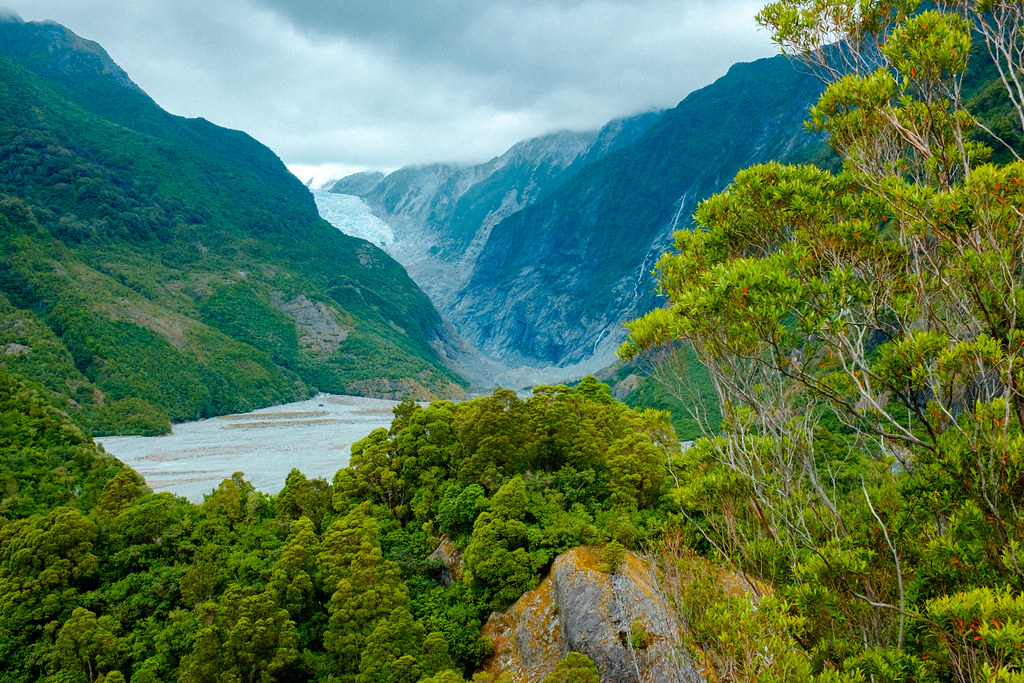 And the glacier 100 years ago. The forest has all grown in since then: 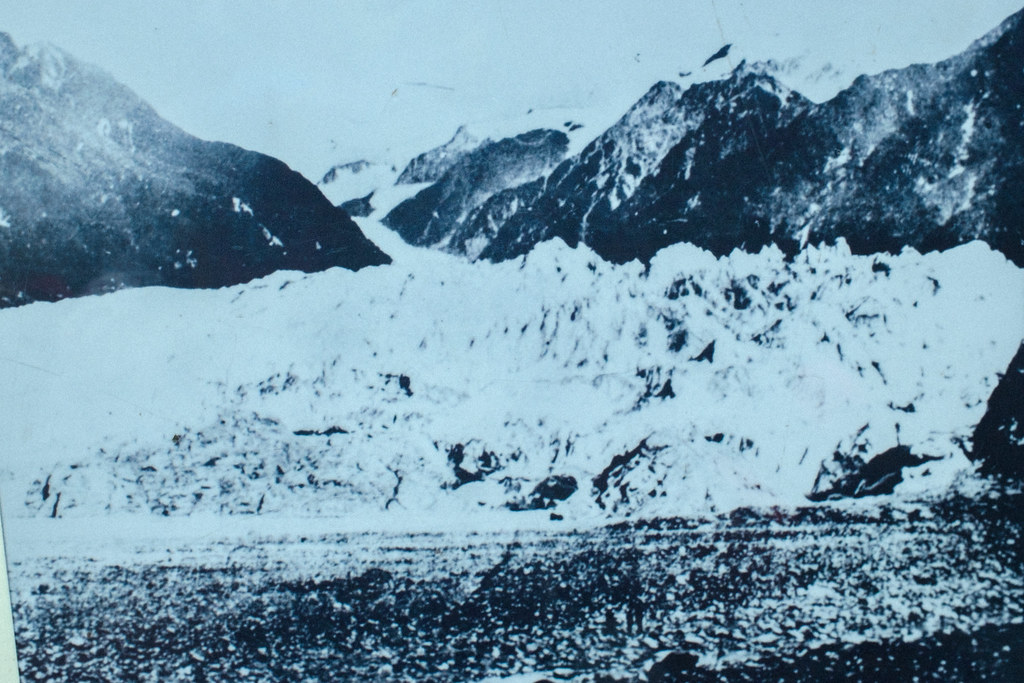 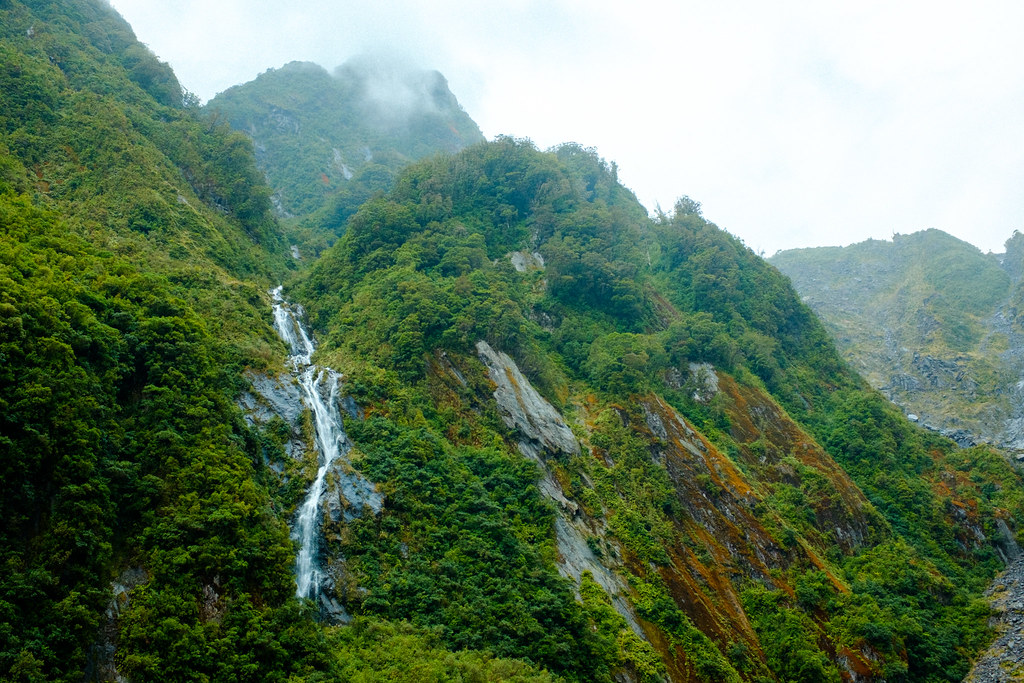 Waterfalls everywhere, people everywhere, hard to find a spot to camp, and nobody is from New Zealand. We end up sleeping on the front lawn of a hostel, kept up by a couple of English girls, who are mildly hysterical (and loving it every second of it).

“We can’t find accommodation! What will we do without accommodation! I simply don’t know! We’ll have to sleep- sleep in the street!” they lament in their loud penetrating extra-drama English girl voices. 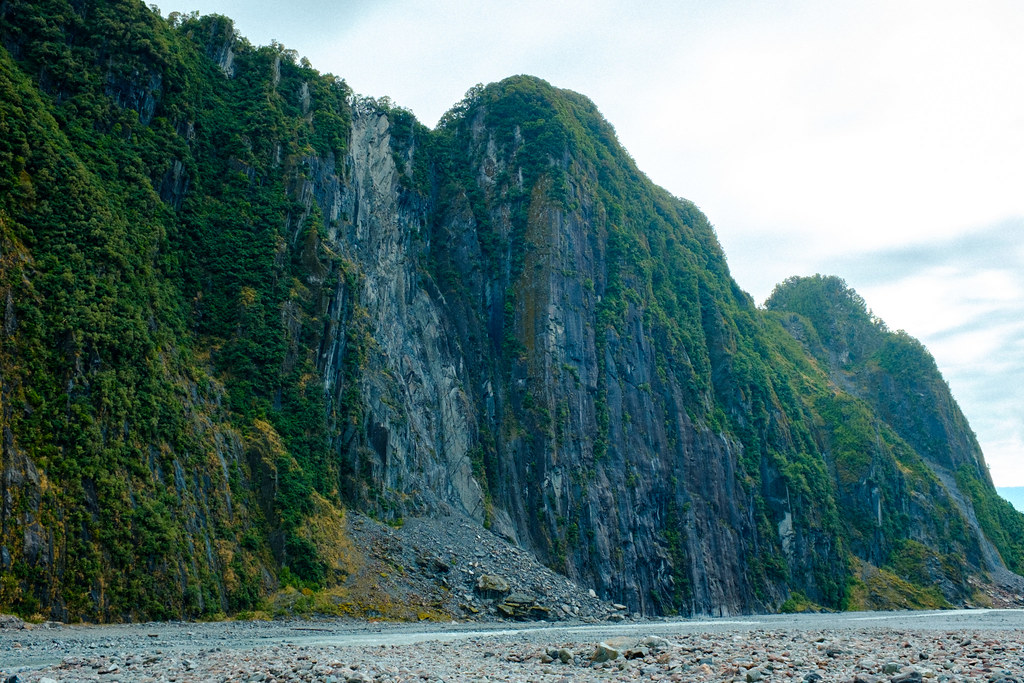 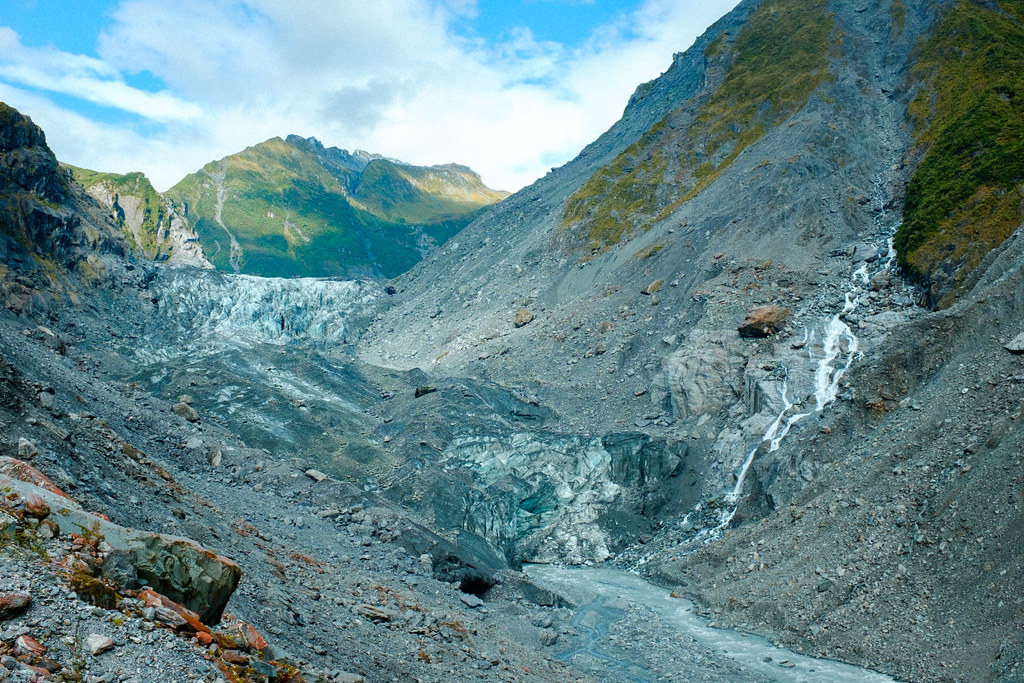 But the scenery is sweet, if you can see over all the selfie sticks. 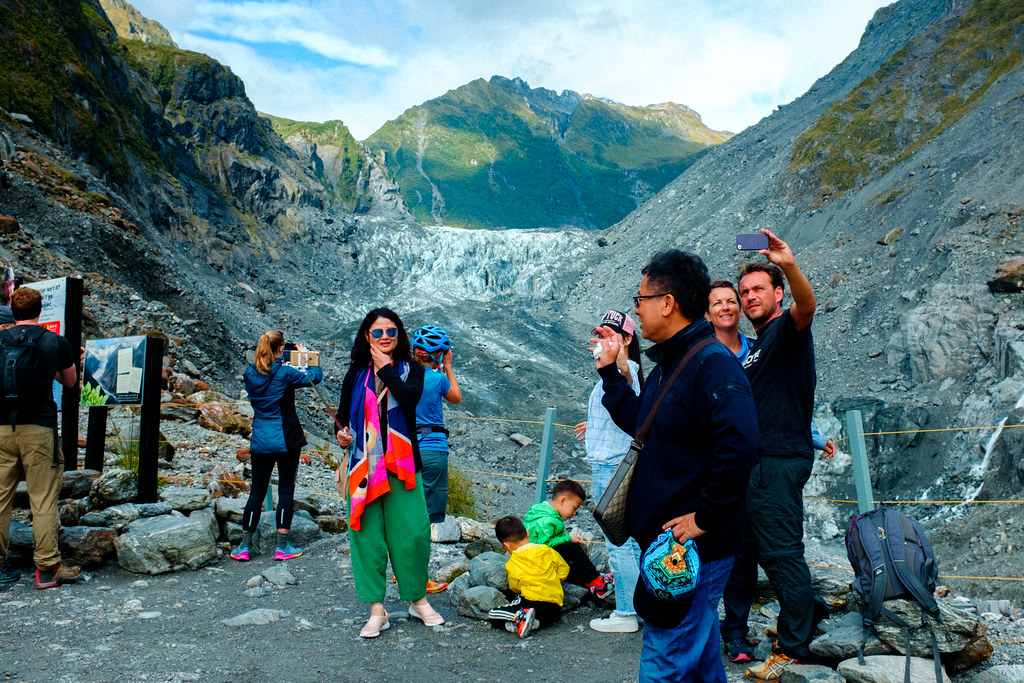 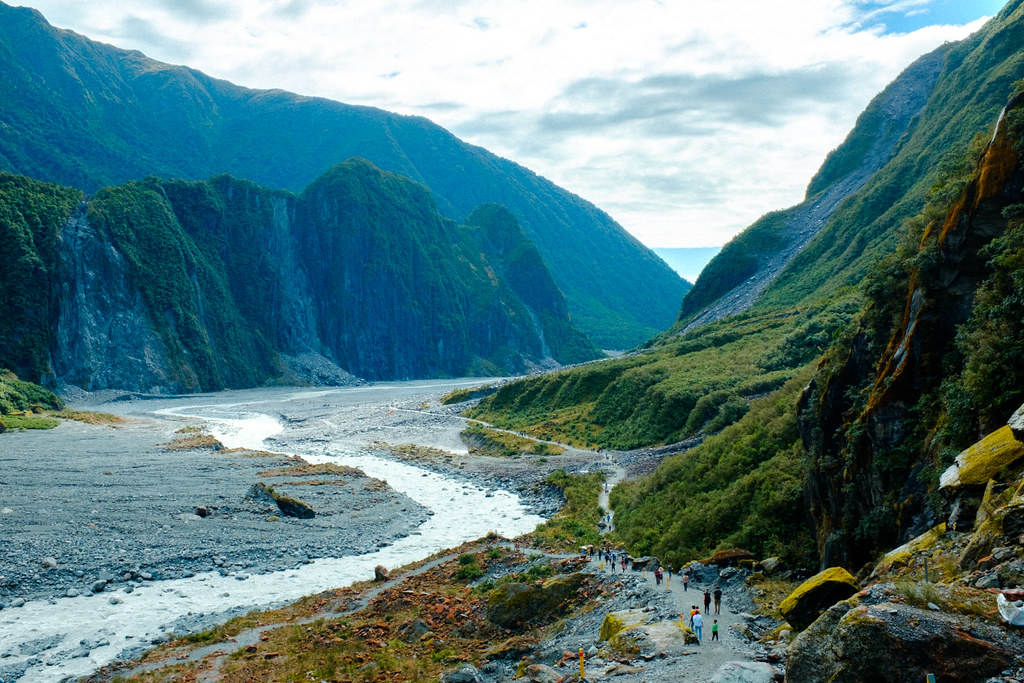 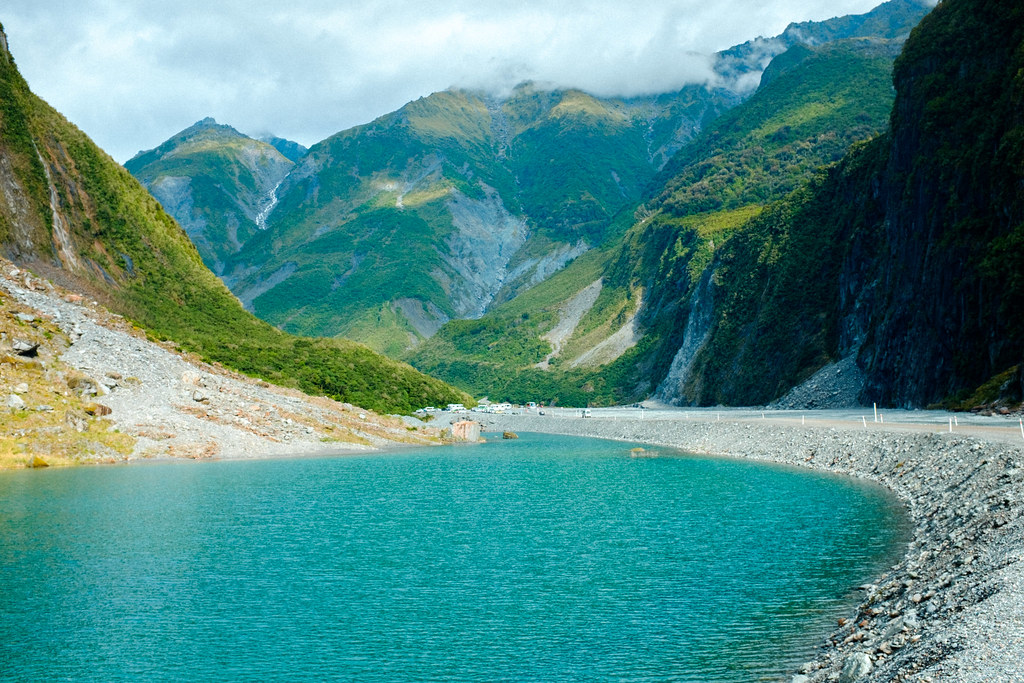 After slapping sandflies all evening and morning at (not so) Pleasant Flat, we climb Haast Pass. On the other side, finally dry, in the rain shadow of the Southern Alps. It’s an extreme change- it can rain 350 inches a year on the west side of the pass, and only 30 inches over the other side. Nothing better than riding into a nice sunny desert. 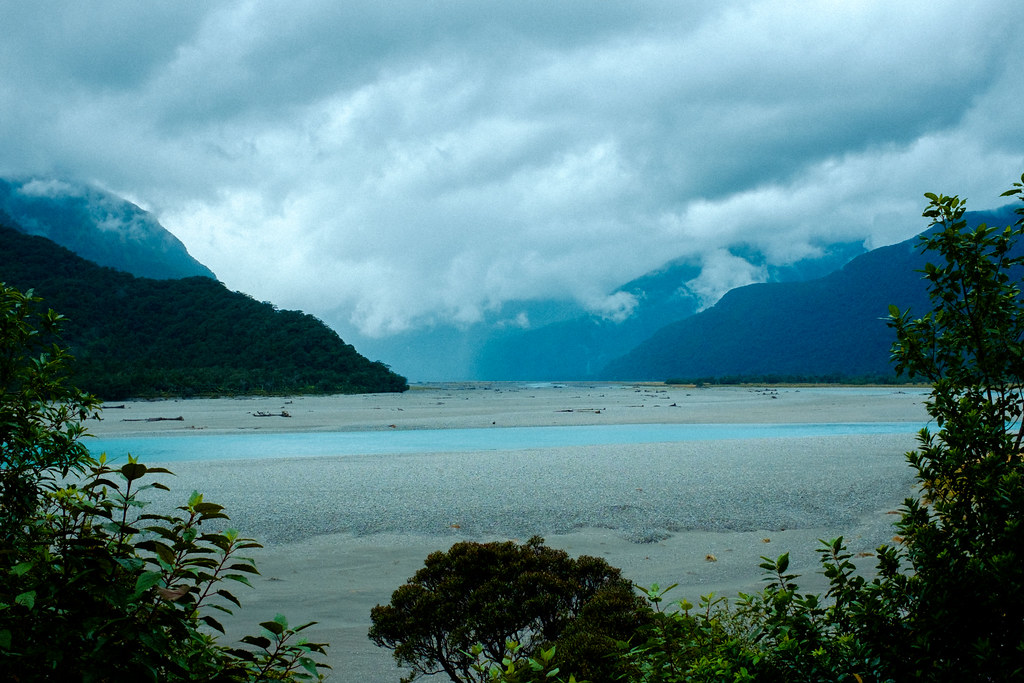 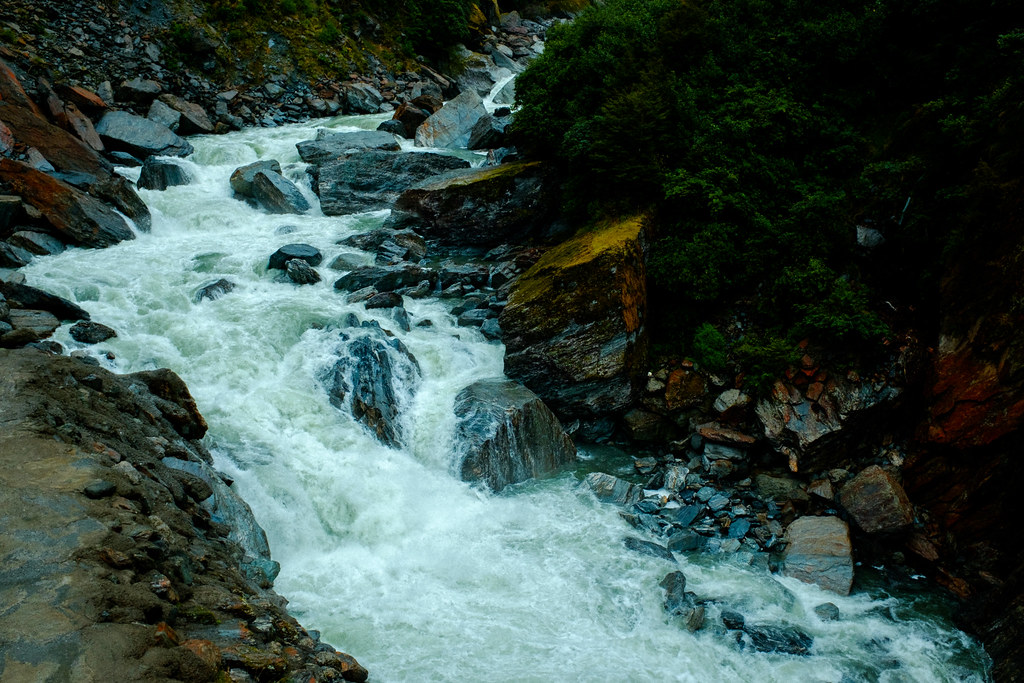 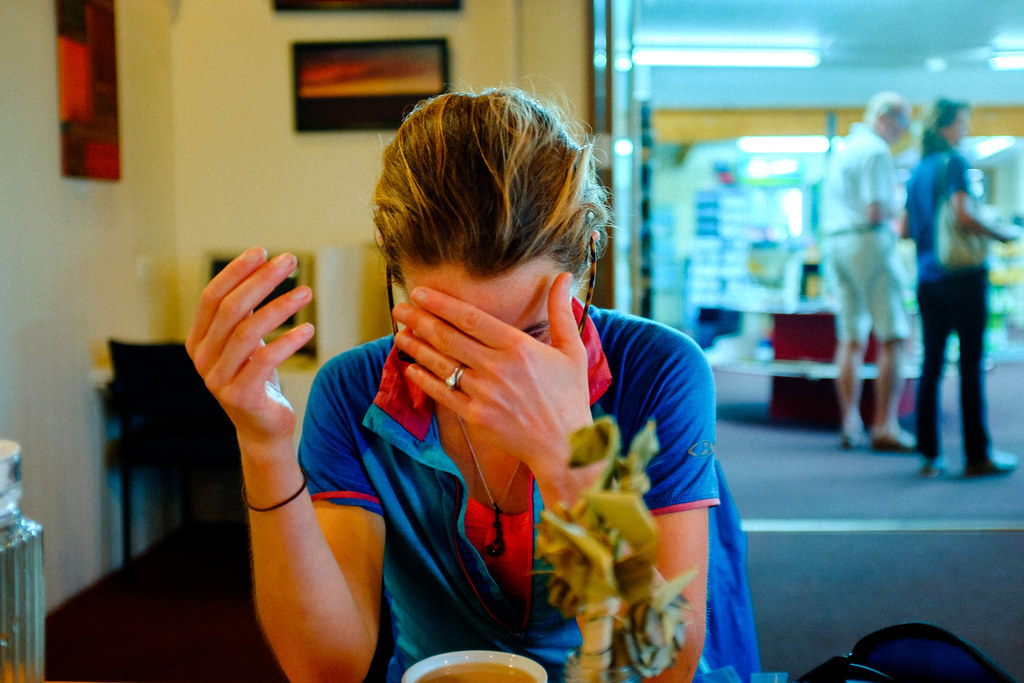 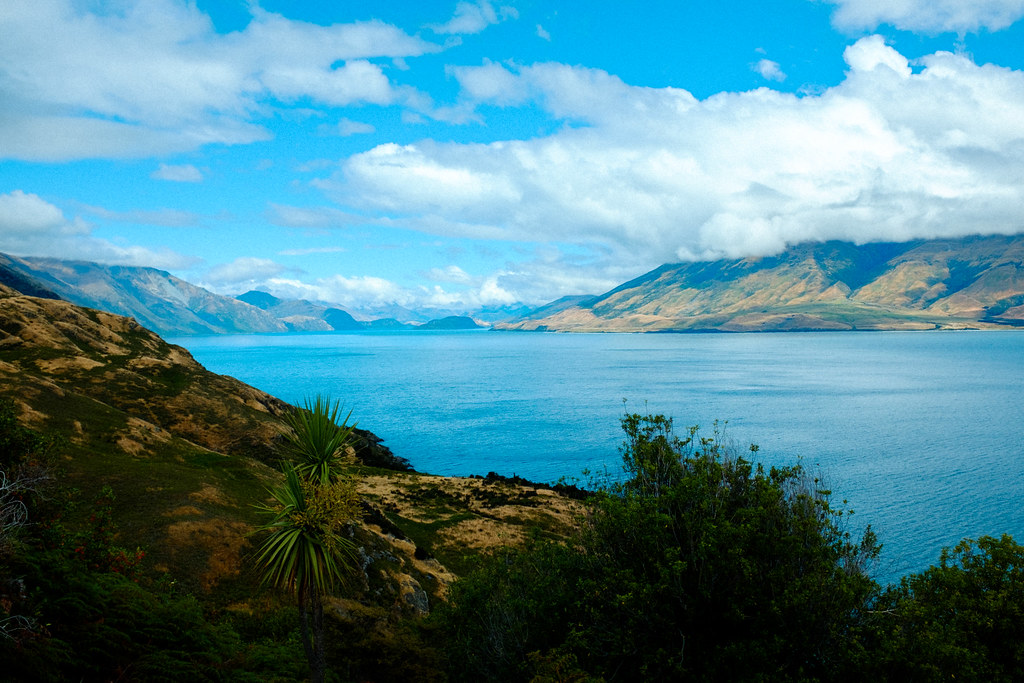 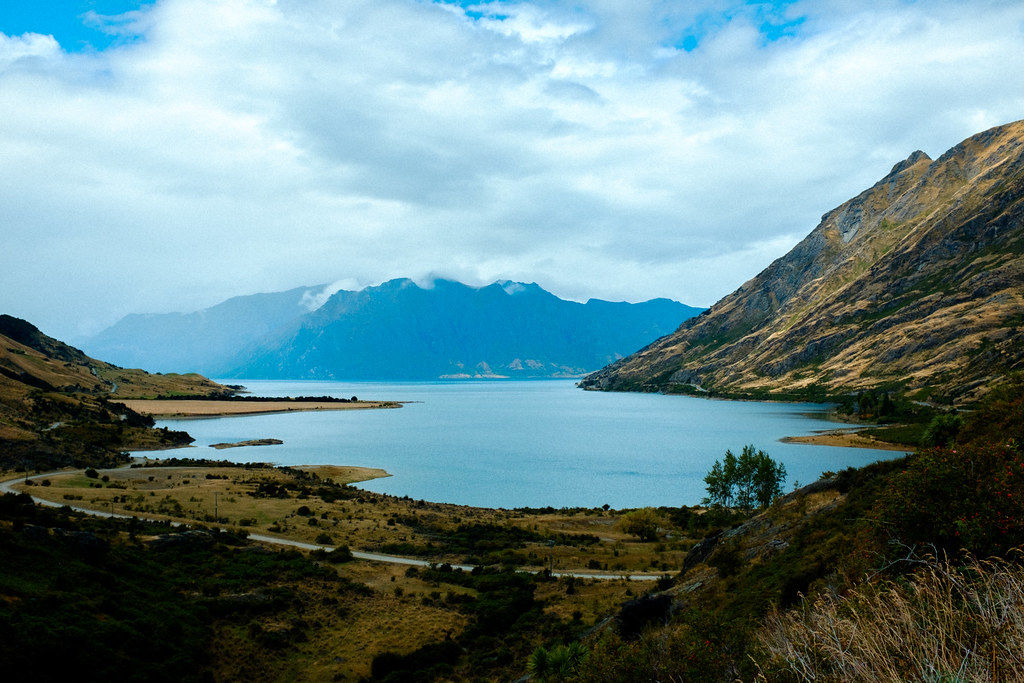 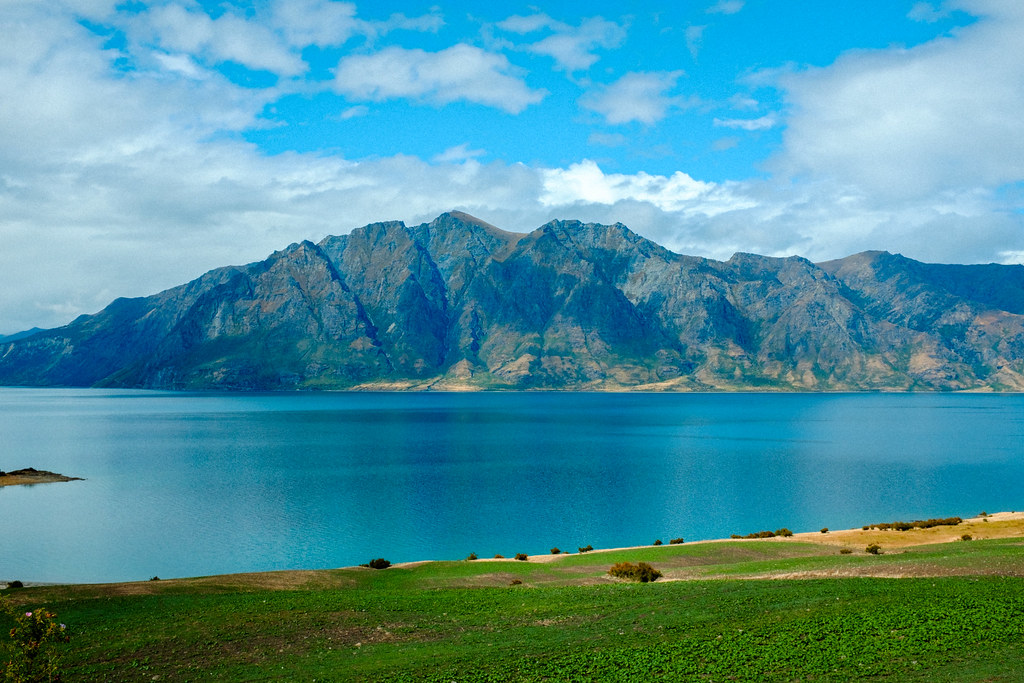 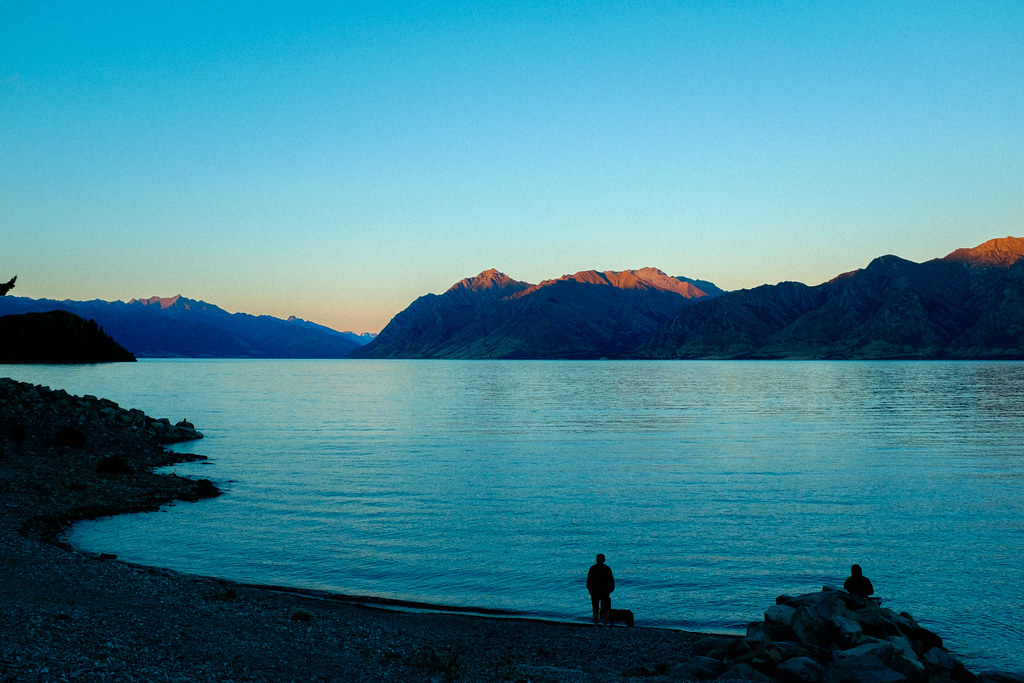 We camp next to Lake Hawea, perfectly clear with a nice gravel beach. And it’s quiet.