“That’s all mate,” says the baggage guy and pulls off his gloves. I’m standing with my bike on a little cart, Colleen sits against the wall sweating, doubled over with a real bad stomach ache.

Nuts. This isn’t a good start. We go over to the baggage claims area, and the very nice lady from Air New Zealand assures us that Colleen’s bike will turn up within five days.

“We’ll give you a call,” she says. “In the meantime, just go ahead and continue on with your trip.”

“Huh. Well, we’re bike touring, and that box was half of our trip,” I say.

“Oh I see. Well I am sorry about that.” She hands us a pamphlet. And I can’t even be mad, because she seems genuinely sorry.
—

Through biosecurity (New Zealand is real picky about making sure that no foreign dirt or fruit enters the country), and up to the main terminal. The place is full of frantic Chinese tourists. Colleen’s stomach ache is even worse, and her bike is gone. She’s really not having a good time.

The plan was to build bikes and ride into Auckland. So we don’t have a place to stay, I’m not sure how to get into the city, the tools to put my bike together were in Colleen’s box- so I’ll have to carry a 70 pound cardboard bike box on my back if we need to walk somewhere. And I have 30 minutes of internet to figure it out. Fortunately, guide work has made me pretty good at pretending like I know what’s going on (pretending I’m at work makes me feel better too). Colleen clutches her knees, I start to pull out my laptop.

“Excuse me mate, you speak English?” says a guy in a suit.

“Oh sorry. Well you two look like you’re having a rough day. I’d like to buy you a coffee.”

I look at him for half a second, kinda shocked. These people are so nice. “Man, thanks, that would be great.”

And the coffee’s good too.
—

I book a hostel room in town, buy a couple bus tickets, and we’re moving. Colleen is feeling way better now. Off the bus, just a mile-long hike to the hostel now. I hoist my box onto my back, and bend forward at the waist, spin sideways to get by people on the busy sidewalk.

Sweating pretty good. I set the box down every block to rest.

“Well,” I almost start to launch into Pennsylvania geography and explain that we don’t live in Amish country- but it’s probably not worth it right now. “Yeah, Amish country.” He nods and smiles.
— 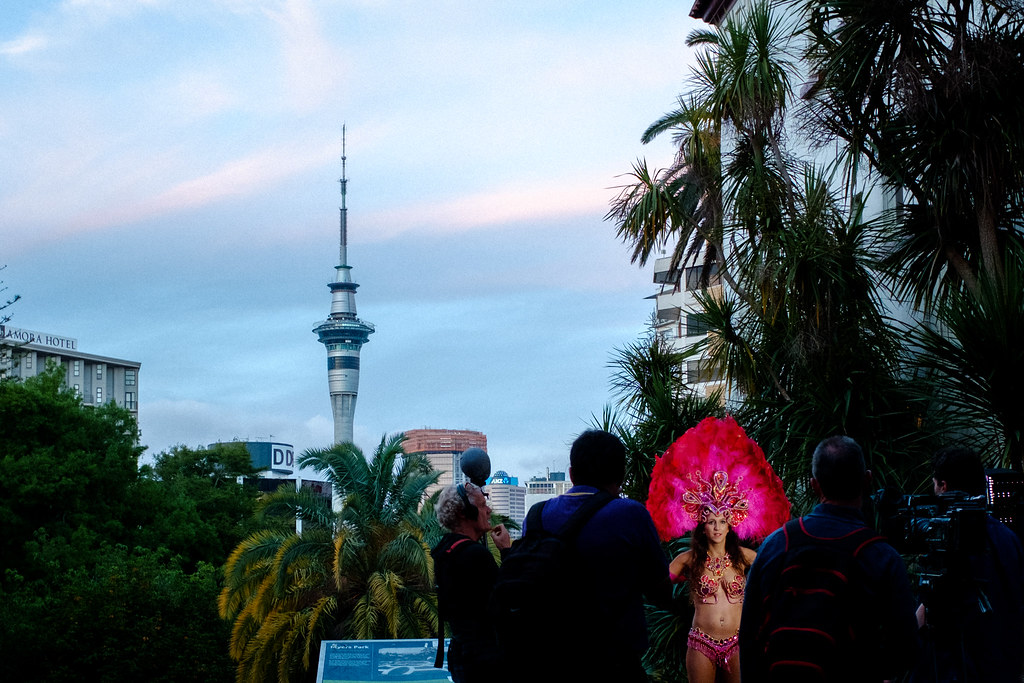 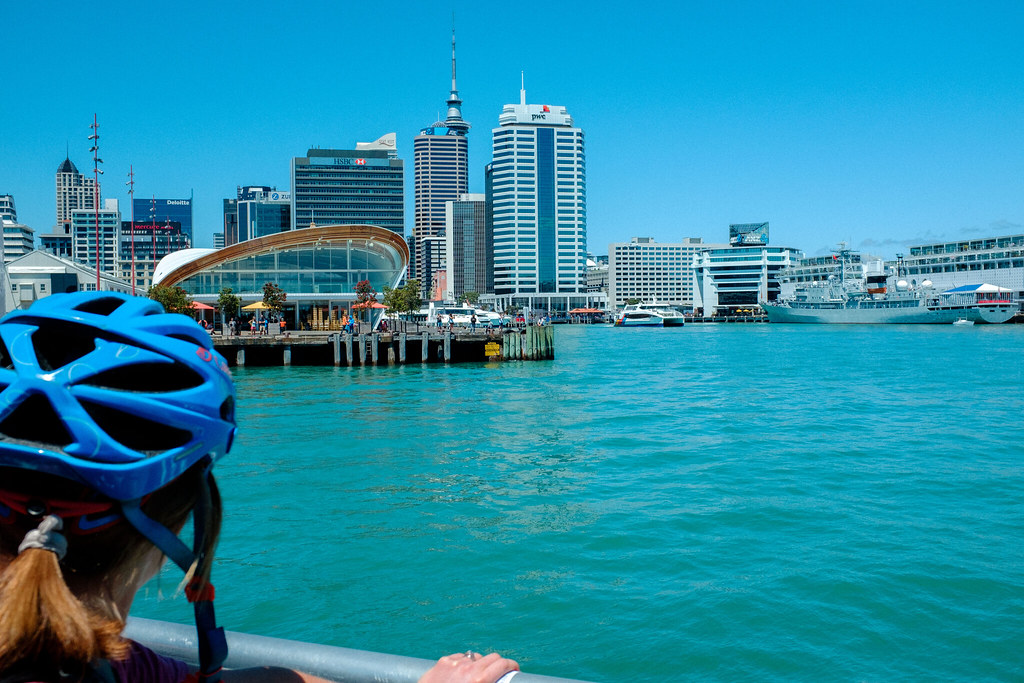 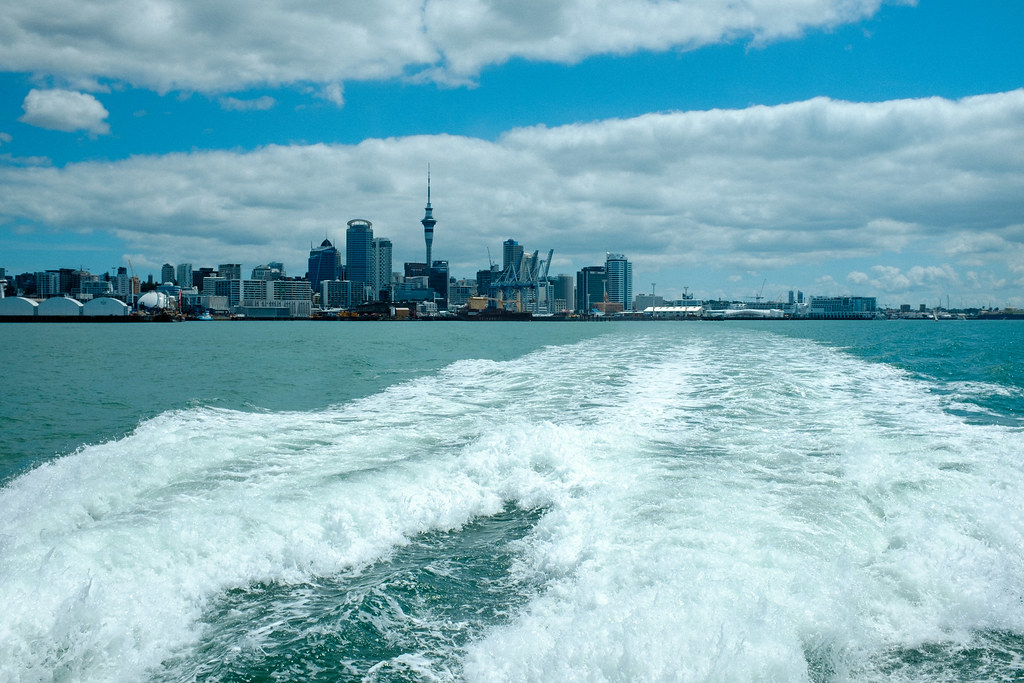 Two days later, Colleen’s bike shows up at the hostel in the evening. We build it the next day, and get the ferry over to Devonport to stay at a Warmshowers with Hamish, who skateboarded from San Fransisco to LA a few months ago.

“Man, I want to hear about that skateboard tour,” I tell him.

“Oh yee. It was cool,” he says. Lots of Kiwi’s seem to be overly modest.

“Yee. Just figured I was skating more than cycling recently.” He stops again.

“What about all the hills in Big Sur?”

No big deal. People do 550 mile long skate-tours with dog ball sticks all the time.
— 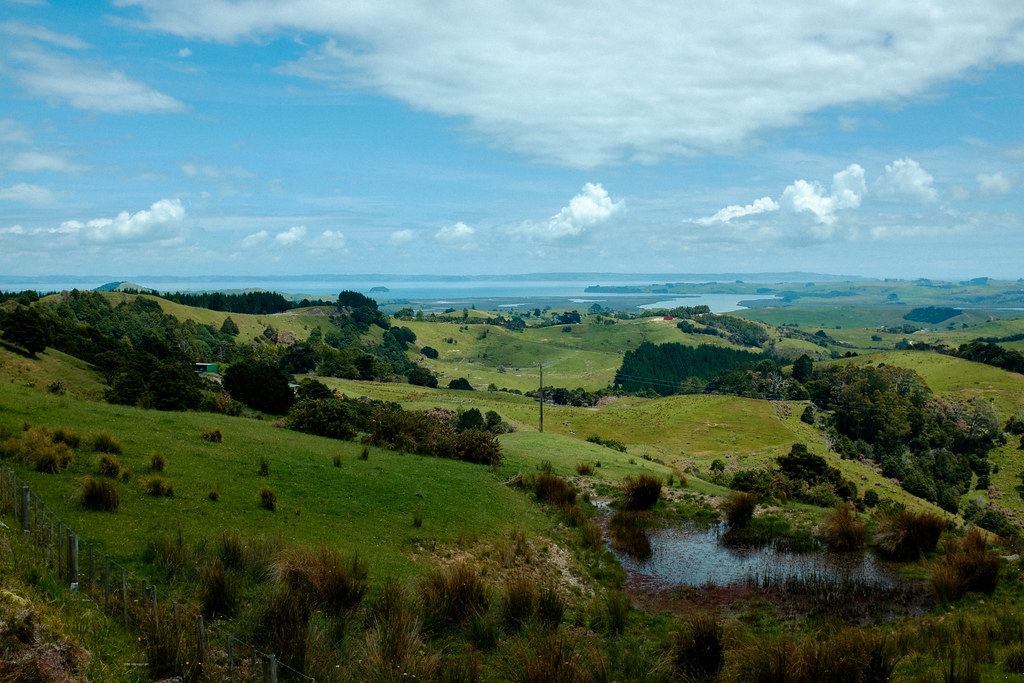 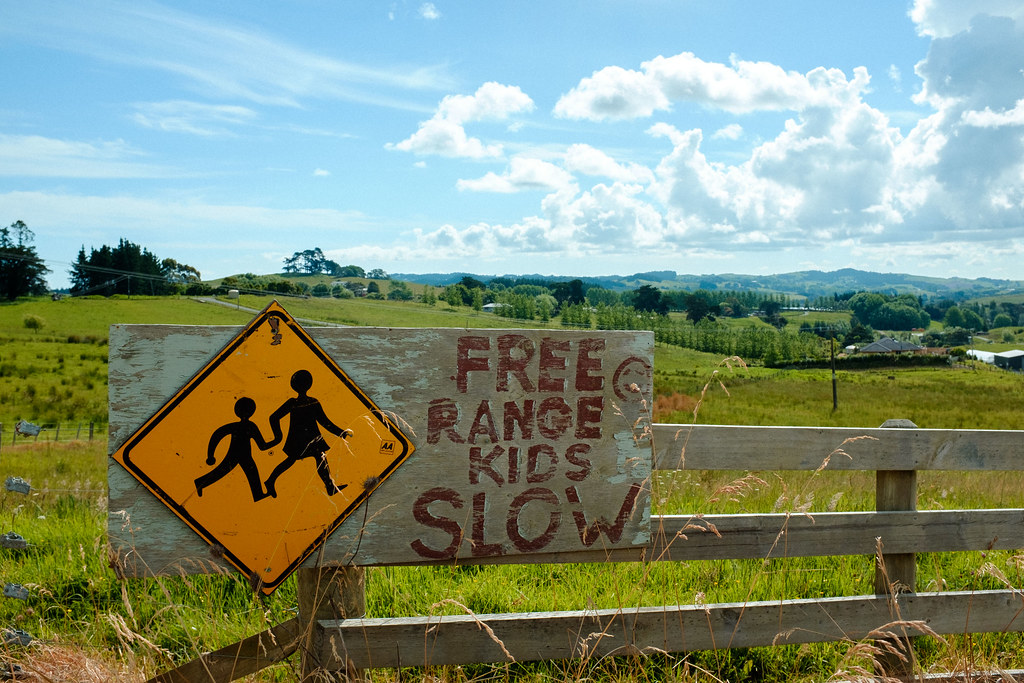 We finally ride out of the city the next day, taking the Tour Aotearoa route. 40 miles north of Auckland, the route includes a long boat ride across Kaipara Harbour. We ride down to the boat ramp, nobody there. Ask around in the grocery store.

“Oh no!” says the clerk, she looks really concerned. “I haven’t heard of that.” She calls her manager over.

“Oh no!” says the manager, also looks very concerned. “I don’t know about that. But here, use my phone.” Nicest people.

“You on the pedal bikes?” he shouts. Must have seen us ride by. “Nope, can’t go till Tuesday! Boat turned over last week killed eight people. Police still fishing for the bodies.” 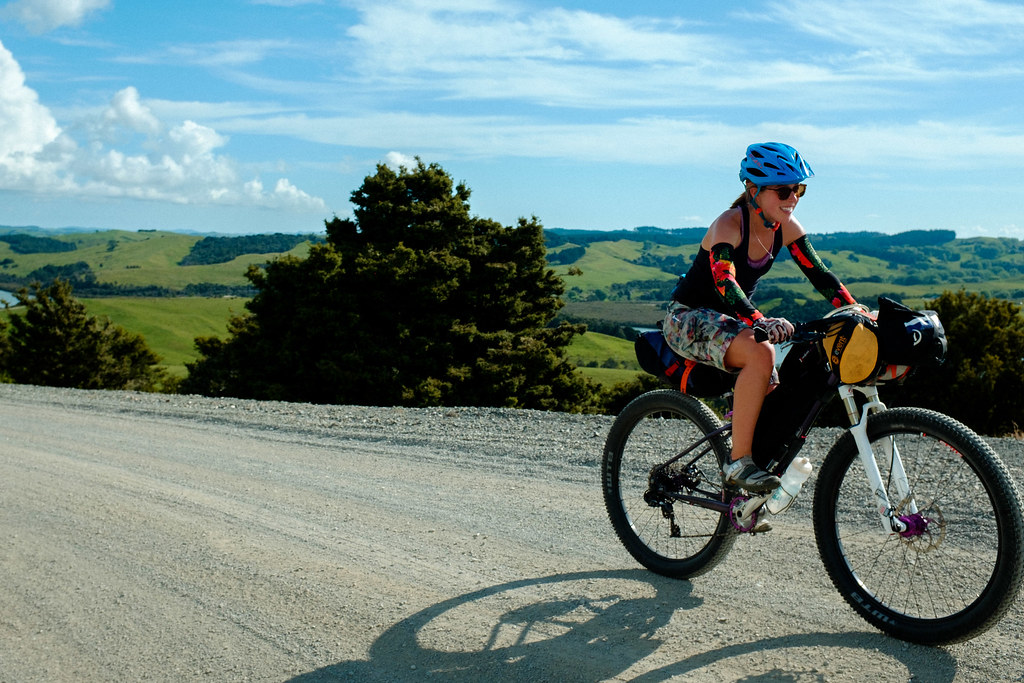 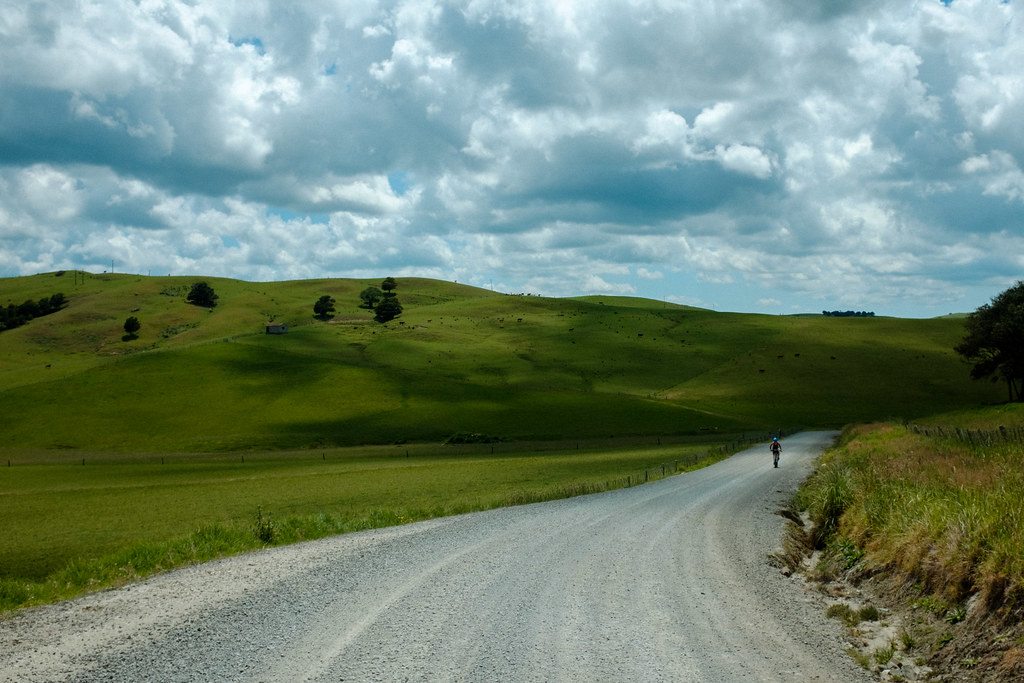 New Zealand was the world’s last big landmass to be settled- the Maori landed here from some other Polynesian islands 800 years ago. Along with being the first people on the islands, they were the first land mammals.

The place was (and kinda still is) like the land before time. It was full of seven-foot-tall ostrich-like Moa, and Haast’s Eagles, which were big enough to prey on children.

European (mostly English and Scottish) settlement picked up in the 1850s. The Moa and the giant scary eagles are gone, but the place is still covered in novelty sized dinosaur ferns and giant trees.

A series of pictures of my bike next to big things: 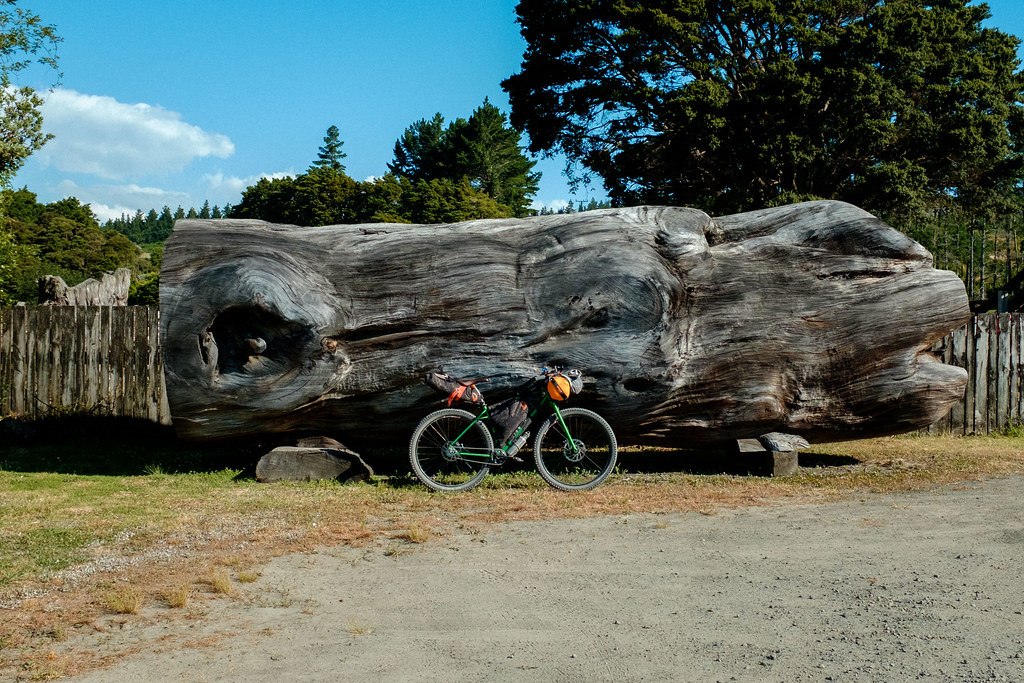 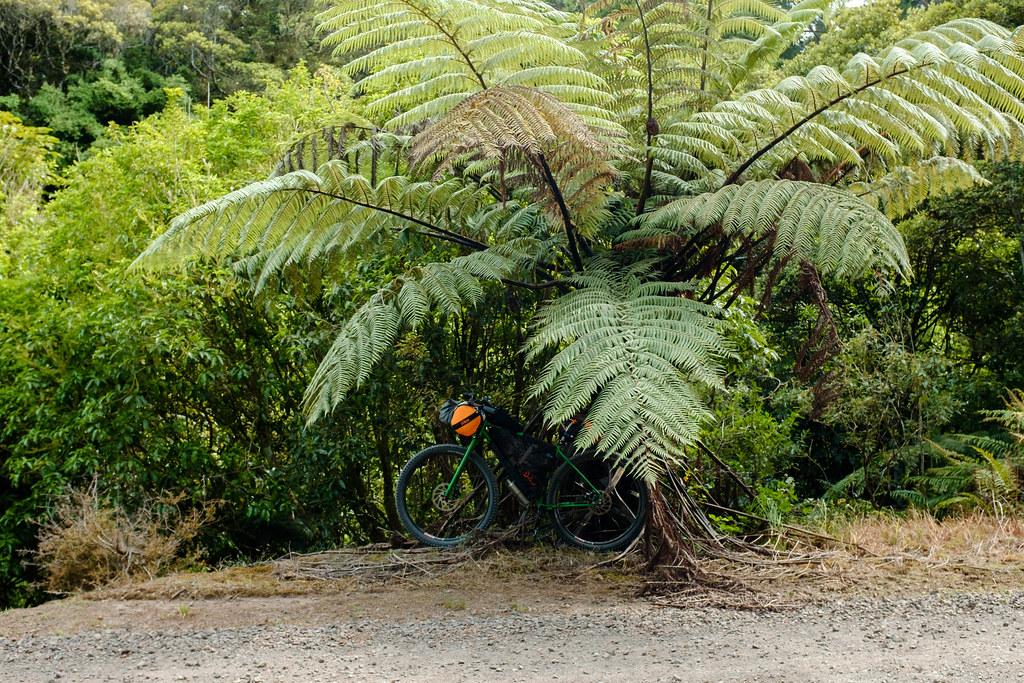 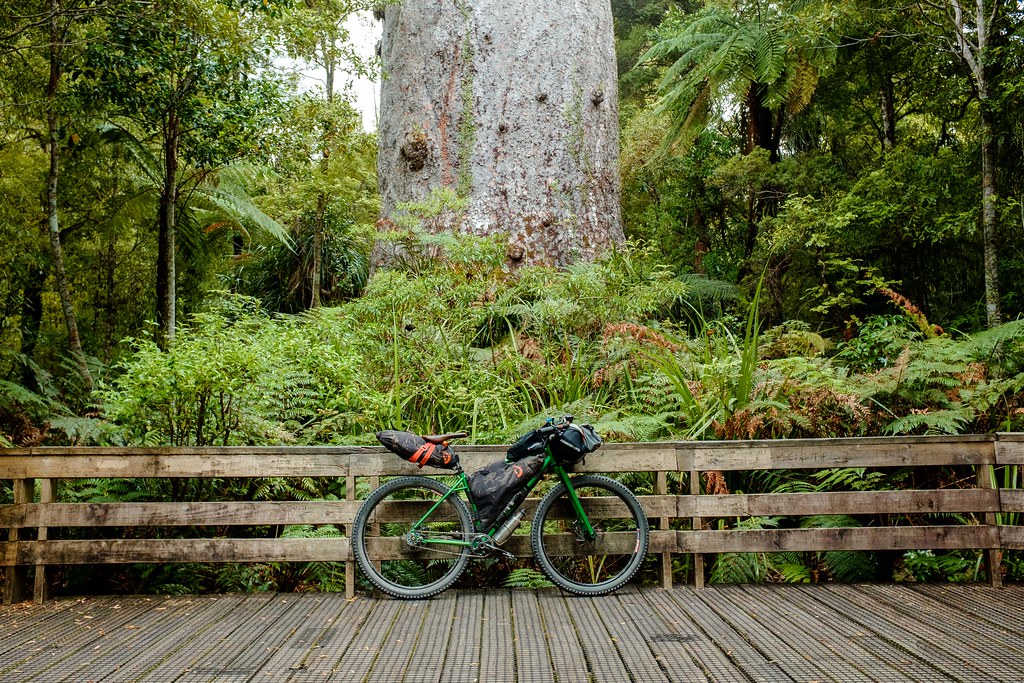 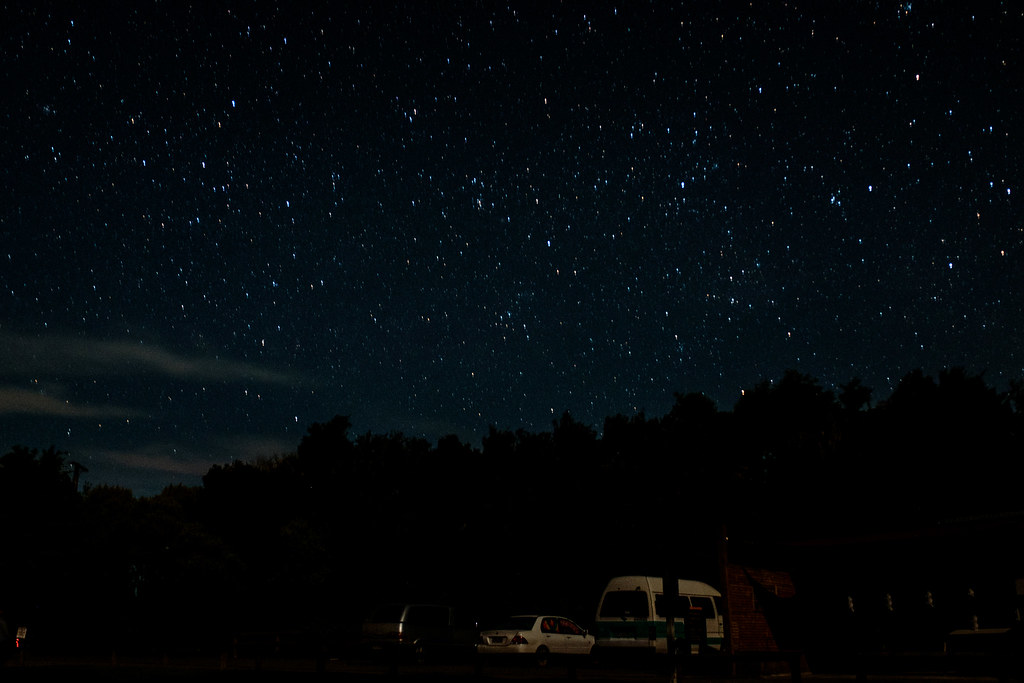 We’re camped next to one of the groves of giant Kauri trees. Sunset, the day bird’s songs peter out and the nocturnal birds pick up.

“REEA REEA REEA REEA!” screams a Kiwi. Another one answers. “REEA REEA REEA REEA!” We walk into the woods to look for one of the little fuzzy pear shaped things. Hear one stomping through the leaves- they’re loud and clumsy and snuffle constantly to blow dirt out of their nostrils. But it doesn’t stomp over to the path.
— 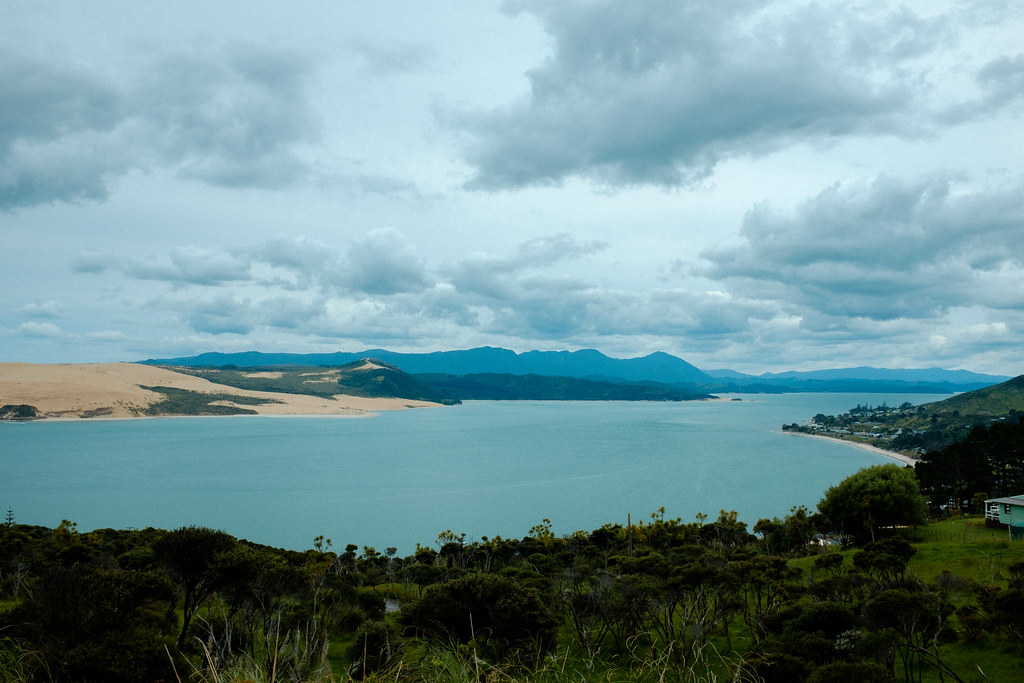 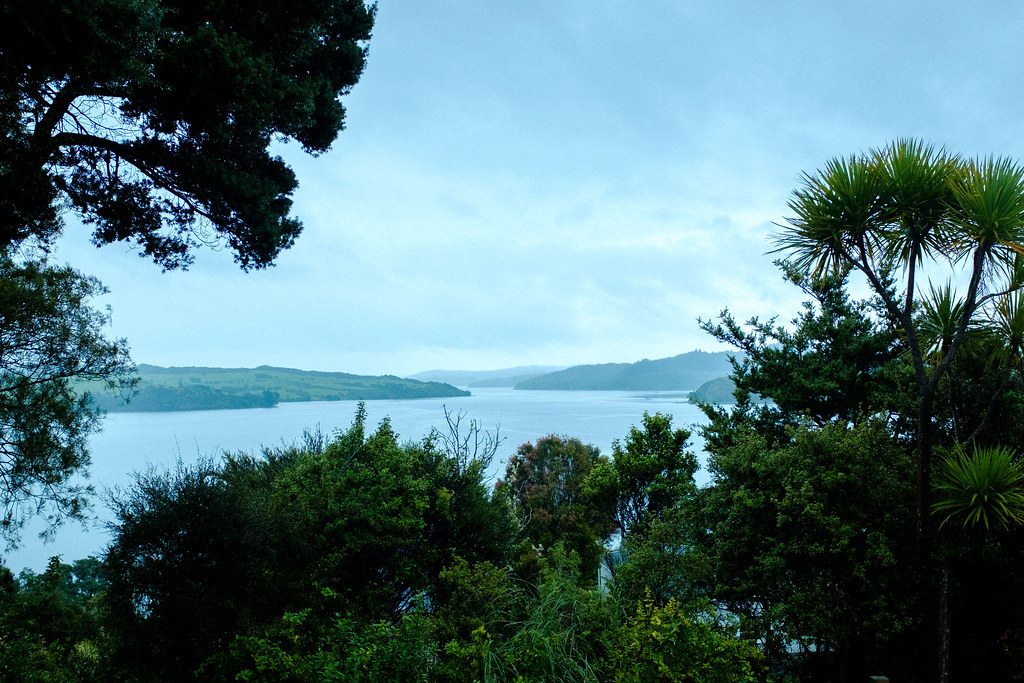 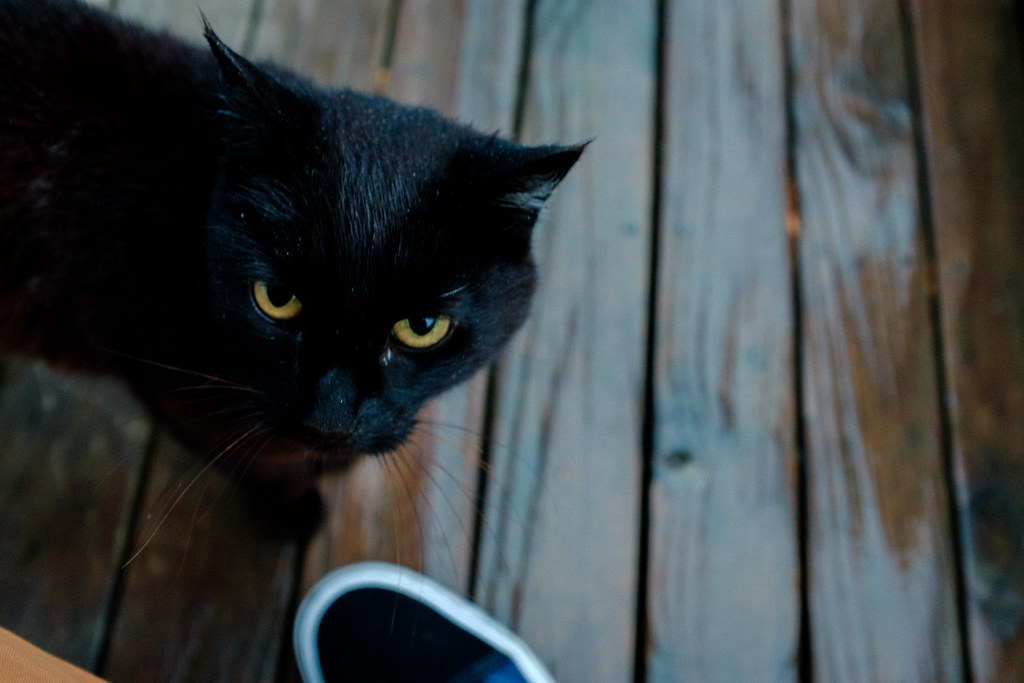 This cat stole broccoli off my dinner plate, and ate it. First vegitarian cat I’ve met. 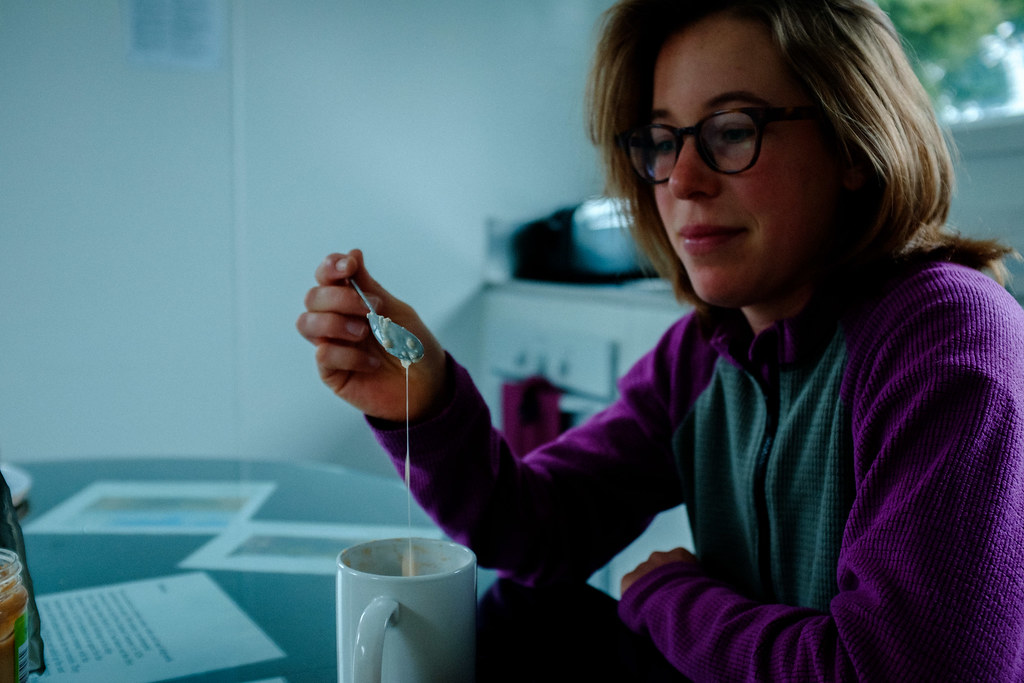 Campgrounds here all have kitchens, but it doesn’t make oat slop any more satisfying.

Stopped for lunch at a boat launch by the side of the road. A big shirtless Maori guy and his son pull over to stretch.

“Where you’s heading?” he says.

“Just around, we’re here until April.”

“Ah yee? You’s like’n it?” he says. Looks at me expectantly- everybody we talk to wants to make sure we like their country. I assure him that it’s great.

“Yee yee yee yeea,” says his son. “And tell’em about the car ferry.”

“Oh yee yee yee yeea, the car ferry. You’sll get a car ferry in Rawene. Take your bikes right on.” He pauses. “But the names Peter. Ask for me you’s get to Hokianga Harbour.” 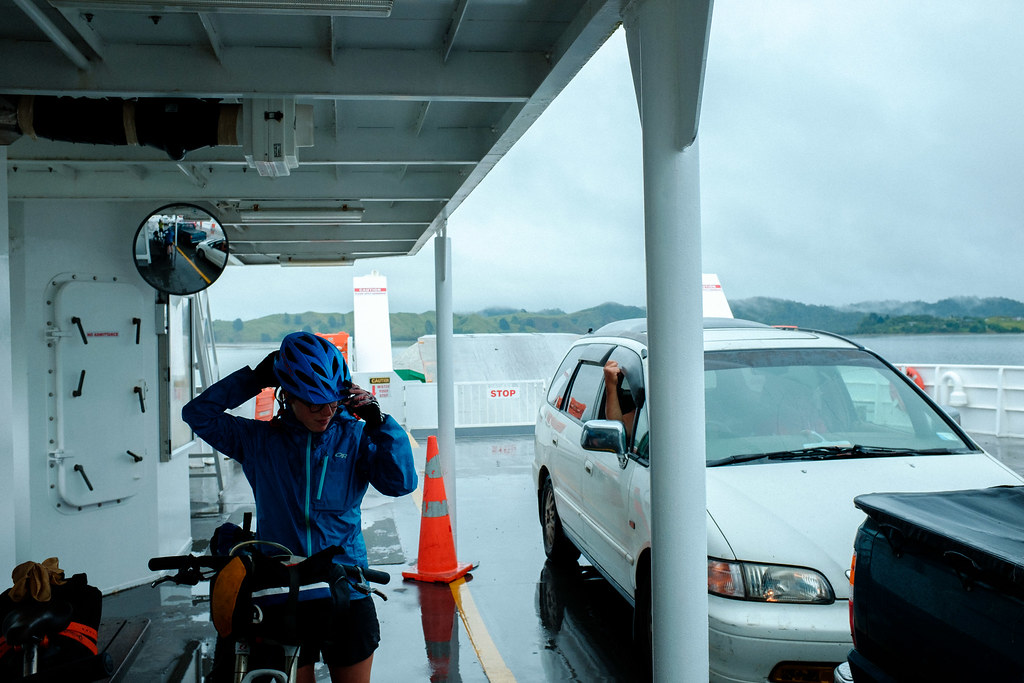 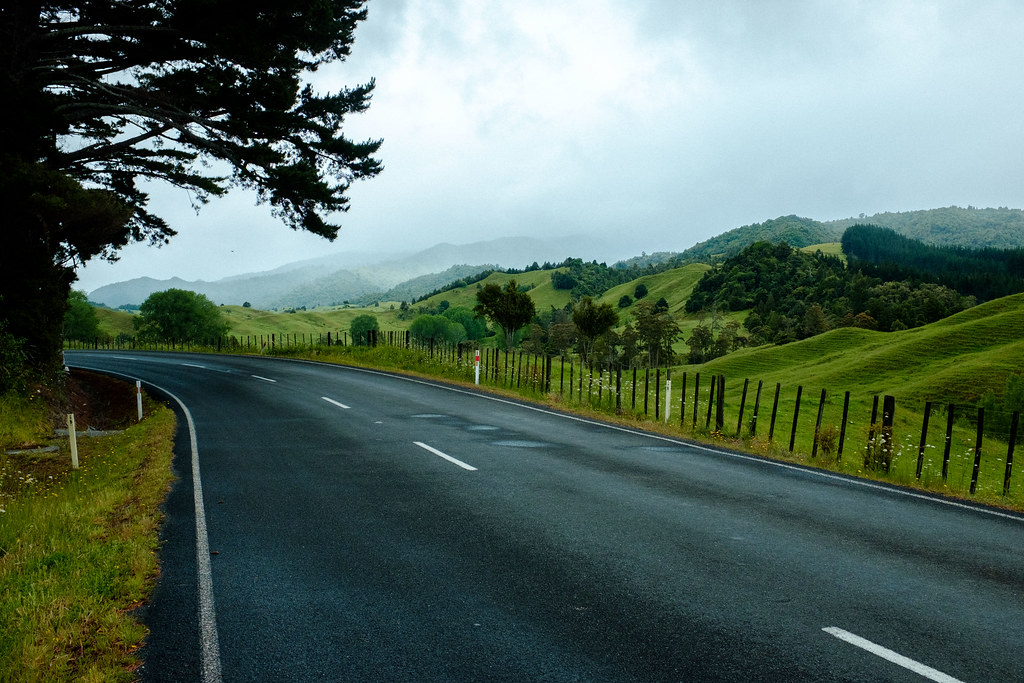 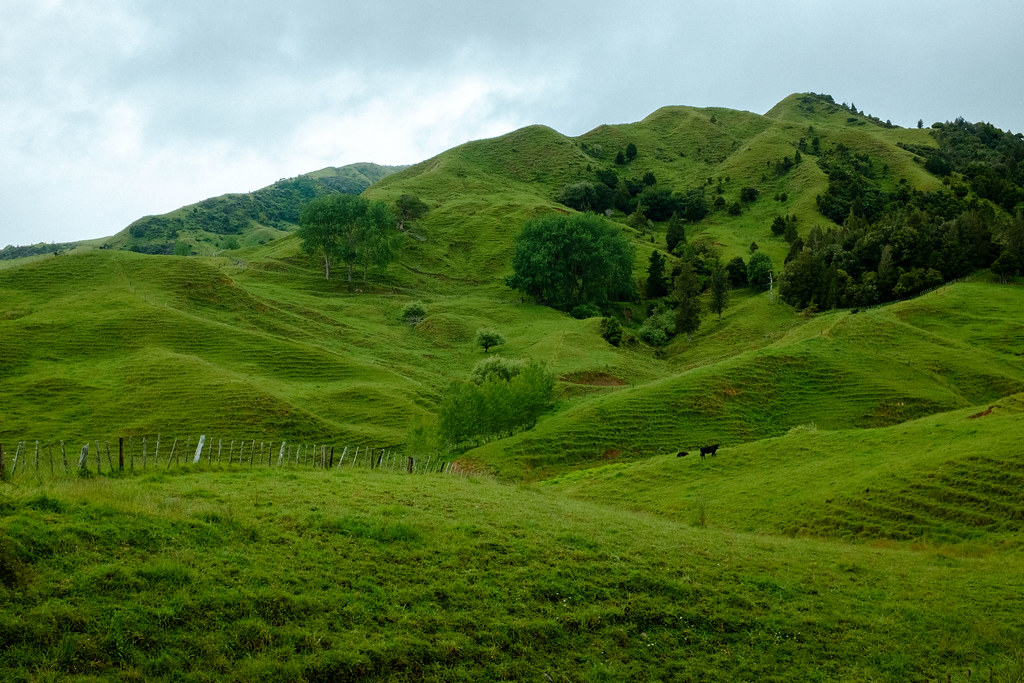 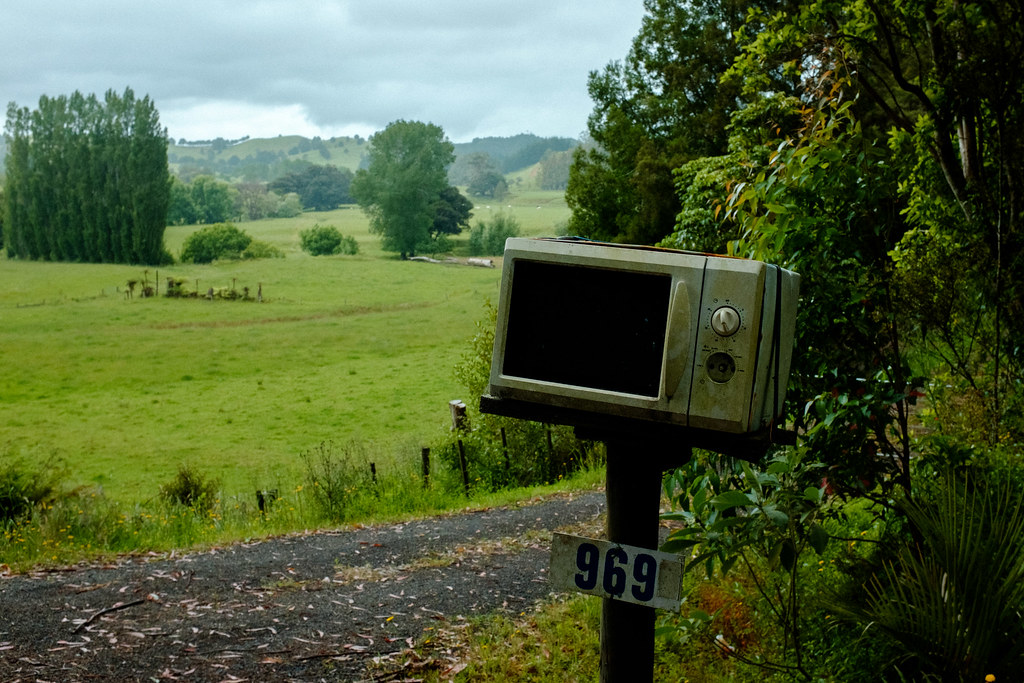 We ride north to 90 Mile Beach (actually 60 miles long), and head up the beach into rain and a driving headwind. 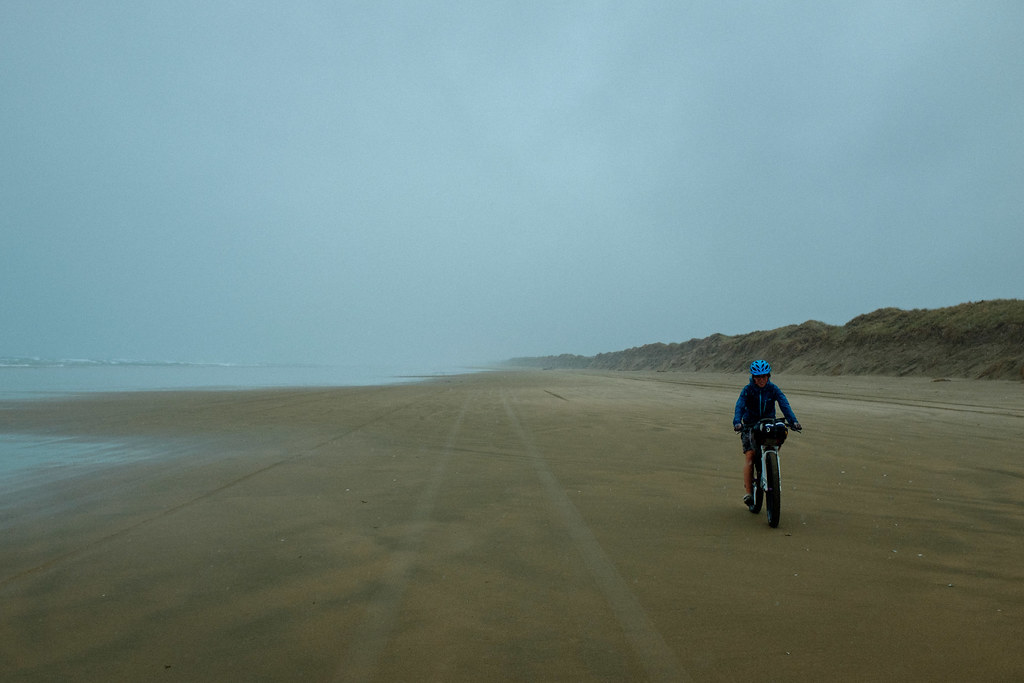 I put on my brakes.

“Let’s go back. I don’t need to go to the lighthouse.”

“Me either. I’ve already been to the lighthouse.”

We turn back, now we have a nice tailwind, and are immediately both real happy that we’re not going to the lighthouse.
—

We’re heading south now, back towards Auckland, shooting for Rotorua by Christmas. We’ve found lots of good dirt roads, some unrideable trails, and killer meat pies. Excellent place so far. It helps that the coffee is awesome everywhere (espresso machines in gas stations!)