I sit up, and brush my face on ice-crusted nylon. Geez. I thought Sedona was supposed to be warm. “Colleen, stop breathing so heavy. You’re making it snow inside the tent.”

“I’m not breathing heavy! You sleep with your mouth wide open.” She has a point. I am (shamefully) a nocturnal mouth breather. I’ve seen pictures. Colleen unzips the tent and stomps outside. “Did my heavy breathing make our bikes freeze over too?”

“Yes. Probably. You were breathing real heavy.” I burrow back into my sleeping bag.

So far, our plan to escape the winter by going to the desert hasn’t been entirely successful. Every night has been below freezing, and a couple nights have been around 15- which is when tent snow forms, our water bottles turn solid, and we spend the night doing our best fetus impressions. Since neither of us have a bike touring background (I’ve only done those big ride-until-you-drop races), we’re learning lots of things.

I’ve learned that a 35 degree sleeping bag will keep me alive 20 degrees below its rated limit, but alive isn’t exactly the same thing as happy. Colleen has learned that when a bike industry warranty department says, “Oh, we fixed that delamination issue. We’ll just send you another pair of the same shoe,” they’re lying (about the fixed part).

After we got off the Amtrak late Friday night, we dragged our bike boxes a block to the Motel Debeau hostel. Aside from our seat neighbors the first night, the train was awesome. Totally stress-free, easy to sleep on, easy to check bikes, cool views, and a few stops where there was enough time to walk around. But sadly, those long-distance trains aren’t doing great financially, which isn’t surprising- our train was maybe 15 percent full for most of the trip. So ride now! Save the train! (I’m not usually an exclamation point user, but I really liked the train).

We left Flagstaff after a snowstorm, and headed down the road to Sedona. 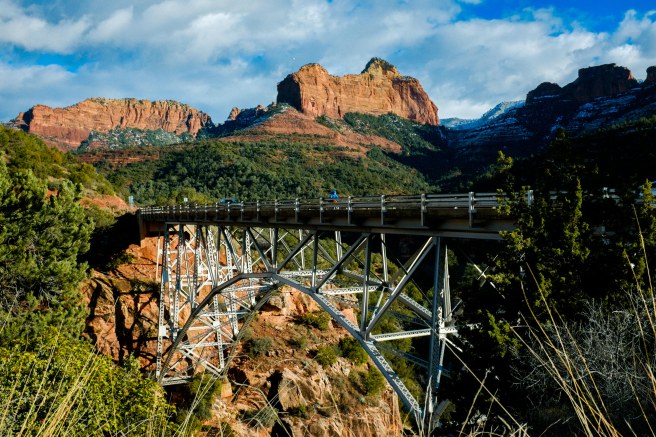 The next day, we hopped on the Coconino Loop toward Cottonwood, which was Colleen’s first day riding a loaded bike on singletrack. I gave her a big old slap on the back at the end of the day for doing so good. 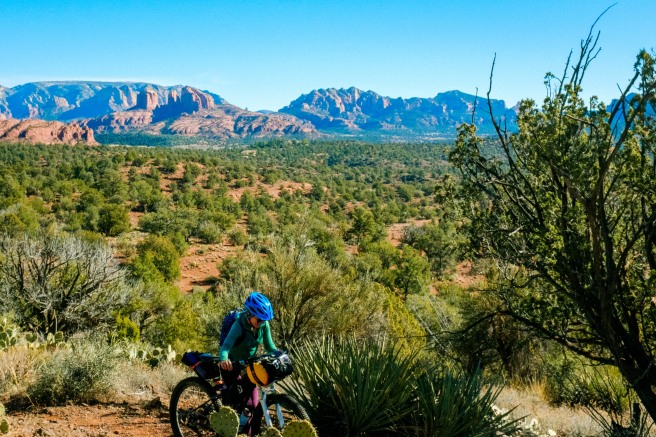 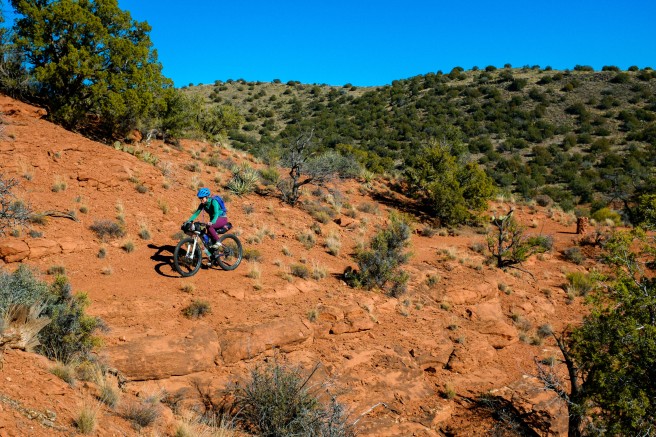 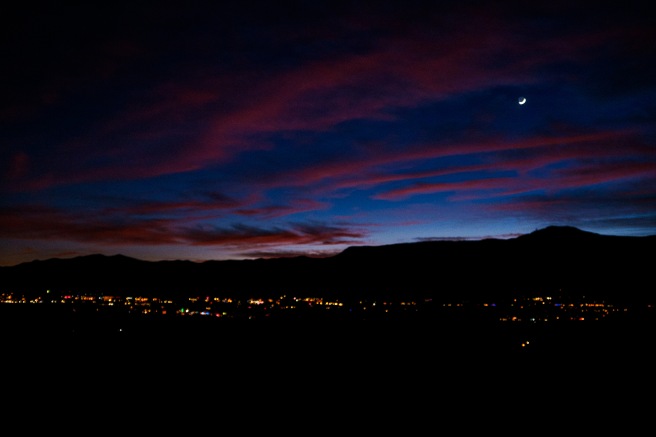 We camped outside of Cottonwood, hoping to ride the Flagstone 500 route towards the Black Canyon Trail. When we woke up, it was barely above freezing and pouring. We killed half a day in town waiting for the rain to clear off, then started up Mingus Mountain. We didn’t get far.

The dreaded death mud. It looked snowy up higher, and the mud would only get worse. So we turned around and sat in a coffee shop for the rest of the day. I hoped that if we camped part way up the climb and got going early enough, we might be able to make it over the mountain before it thawed.

Just after sunset, we were headed back up the dirt road. I stopped to wait for Colleen. She didn’t look so good.

“I’m not feeling so good,” she said. She pushed her bike. I looked up the mountain. A wall of white slid down. Oh crud. The blizzard hit us a few seconds later. Some desert. I ran around looking for a flat spot, and set up the tent in the snow.

After the snow storm, it was clear that we weren’t going to make it over that road on dry dirt unless we stayed in Cottonwood for a week. We didn’t like Cottonwood enough for that.

So we rode pavement towards Jerome, an old mining town with some really good places to eat breakfast. Sometimes I like to imagine that I’m some sort of rough riding bicycle cowboy (the folk hero kind of cowboy, without any of the smelly cow tending responsibilities), but what I actually like to do is sit in a diner, eat pancakes and drink coffee.

They also have sculptures in Jerome. This one looked very satisfied with her big rock spire. 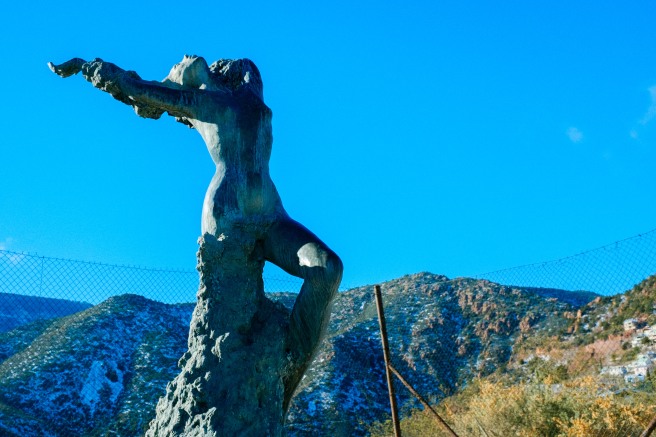 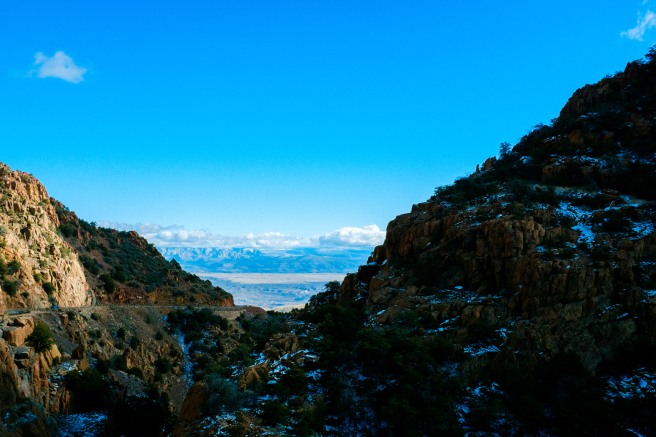 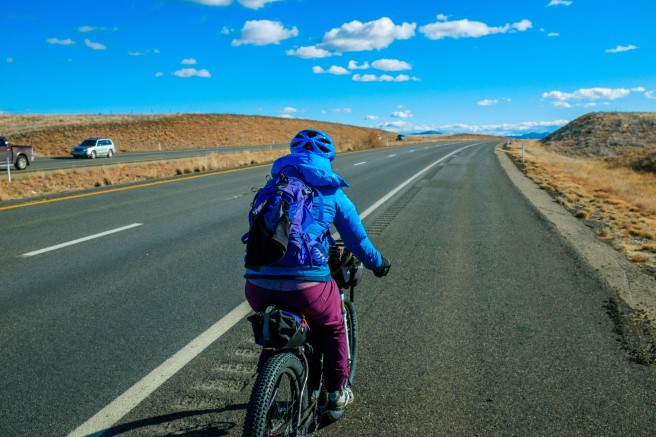 At the crack of noon the next morning, we rolled onto the Black Canyon Trail. The 67-mile-long trail starts up in the high grasslands, then descends down into the Sonoran Desert. It’s really excellent trail, flowy in spots, sweet and rocky in others. Almost no bike hiking. We took our time and did the route in three days. 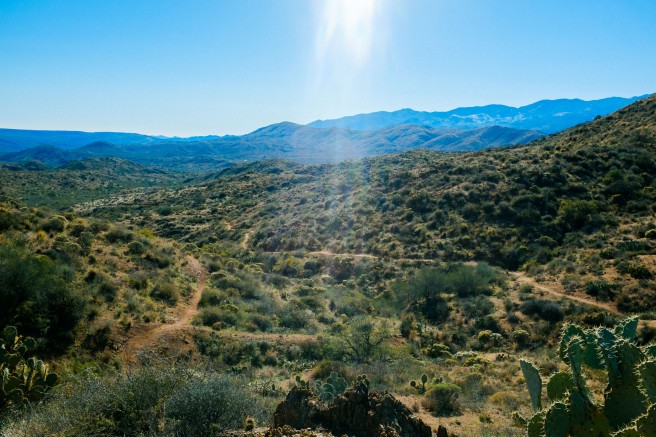 I’m sure that after writing this I’ll crash into one, but so far we’ve dodged all the evil vegetables.

Colleen is having a much easier time riding trail on her new 27.5+ Waltworks than she used to on her ECR. The chainstays on her new bike are two inches shorter. It helps a lot. So do some gears and suspension. 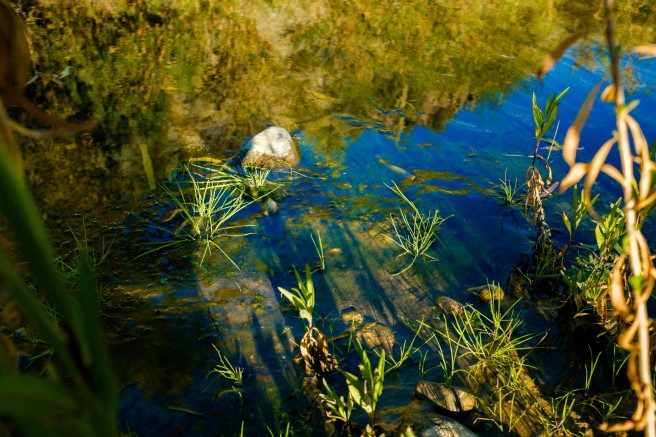 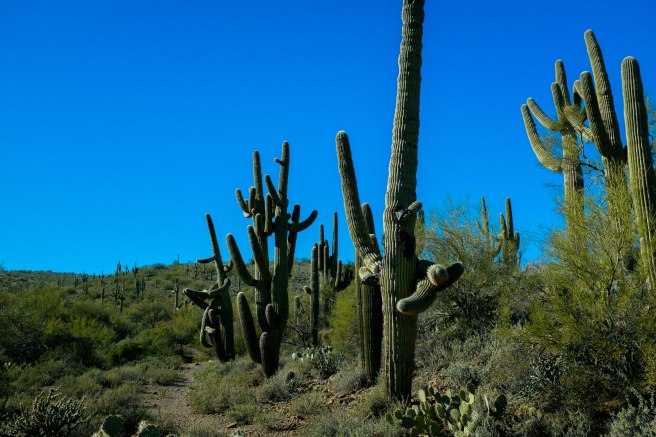 I’m pleased as a pancake with my bike. Contrary to what most companies are marketing, super-short chainstays are rad for bikepacking. A loaded bike usually handles about as well as wheelbarrow full of pickles, so anything that makes the bike more maneuverable is a good thing. After some short experiments with squishy stuff and gears, I’m back on a rigid single speed with a 34×23. It feels right. Our zipper-free Defiant Pack bags are working great too.

The end of the trail isn’t quite as good as the rest.

We’re in Phoenix for a little- we need to find Colleen some new shoes and make a couple other little adjustments. After that, we’ll be headed toward the Camino Diablo.

So far, Phoenix isn’t quite as bad as I expected. There are a bunch of bike lanes, and they have some great new shows on primetime.