Last weekend, the shop went down to Outerbike in Moab for some bike testing. Three solid days of riding a ton of bikes back to back on the same trails was really informative. End result- All bikes are fun, but I still like my bike best.

But here are some thoughts on all the other stuff. 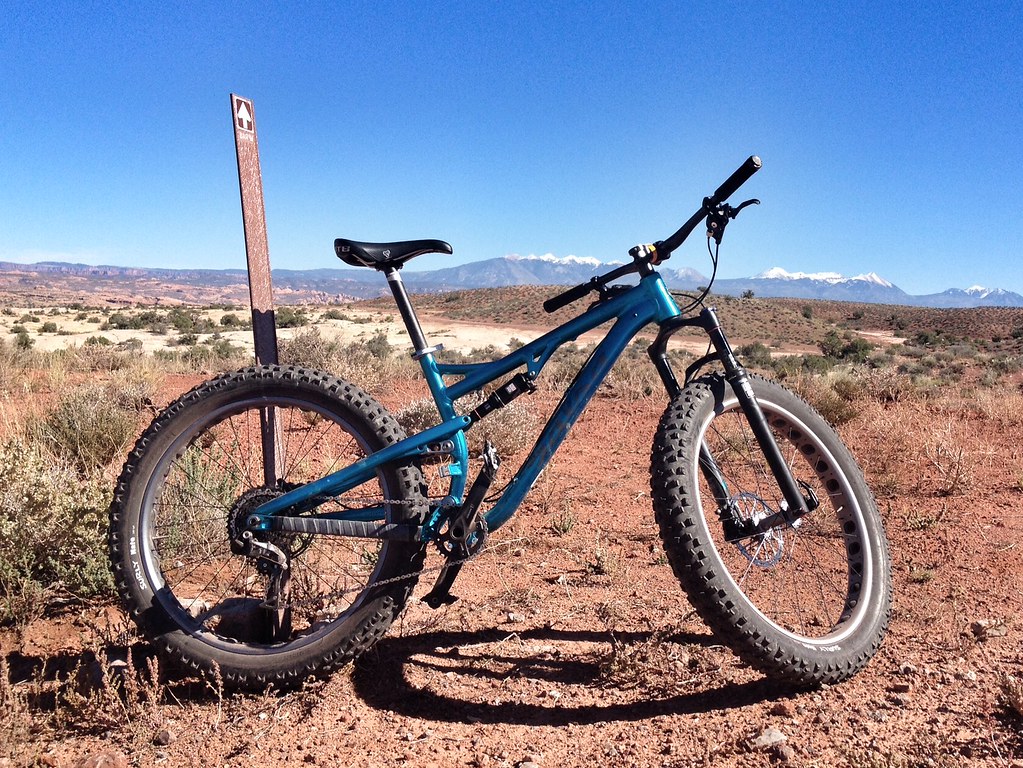 I rode Salsa’s Bucksaw full suspension fat bike thing, and it felt about as nimble as a pregnant walrus.

Slowest and most exhausting lap of the entire weekend. No surprise, but I did at least expect it to be fun in a silly way. It wasn’t. The thing is a total pig- planted to the ground and encourages the rider to squish around in the saddle shifted into the lowest gear. When I tried to stand up and throw the bike around, it just wouldn’t move. 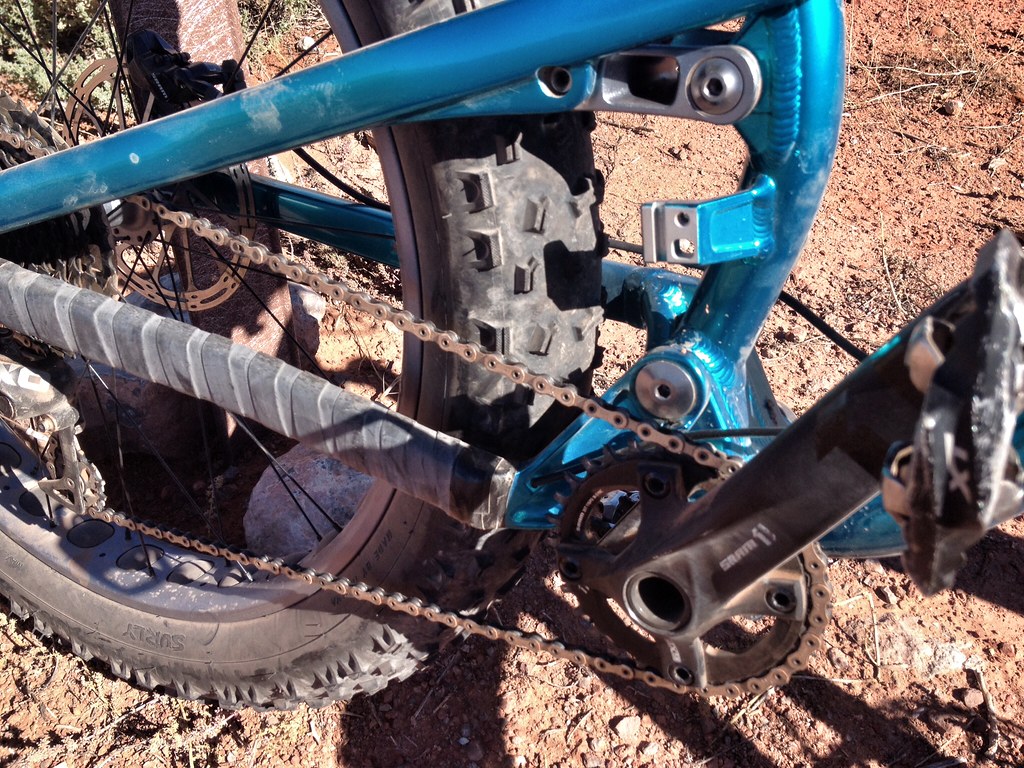 Everything was hard- climbing up on boulders, dropping off ledges, cornering, climbing, accelerating. It didn’t matter what I did, the bike just soaked up every input, both from me and the trail.

The bikes with the new Bluto suspension fork (like the Rocky Mountain Blizzard, and Borealis Echo) were a little better, but still not as fun as a rigid fatbike. The Blizzard’s handling was pretty rough because of the Vee Rubber tires (massive self-steer at every speed, I was fighting the handlebars constantly), but the Echo rode nice with Surly tires.

And the Bluto, apart from being really wide, isn’t too specical compared to other current forks like the Pike. It rides a lot like Reba from 2009.

I like riding fatbikes in the summer becasue they’re simple, bouncy and dumb. With suspension, they turn into slow, heavy, hardtails with medicore handling. And for winter riding, suspension oil gets so thick that forks hardly work anyway.

So unless you’re doing something like riding around on a volcanic scree field in Iceland, I don’t get the point. But that’s just me.

Best fork ever. I don’t know why anybody bothers with anything else. 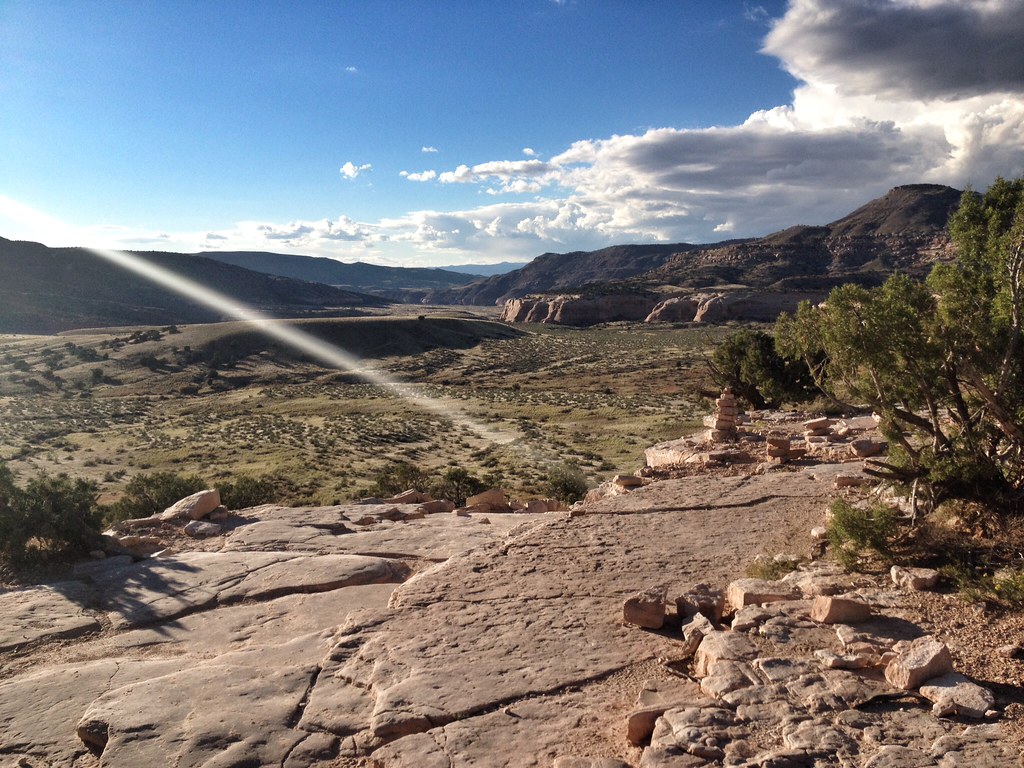 I rode these things into with an open mind. And didn’t like them, but also didn’t hate them. With all the excelent handling 29ers out there, I guess this is just another one where I don’t see the point. I was on a range of travels from 100mm to 155mm.

The only time I could tell I was on smaller wheels was when they started to get hung up in rocky sections. Cornering and accelerating, wheel size made way less difference than suspension design.

Wheel size almost last, because all other things being equal on a suspension bike, 27.5 vs 29 doesn’t make that much difference. Except in rocks. Where small wheels go slower and get hung up on stuff. But a really flashy coat of paint can definitely mitigate that disadvantage.

Low bottom briskets where everywhere, on every wheel size and travel length. One of the worst trends ever. I don’t care if they feel better on a machine built flow-bro trail. For mountain bikey mountain biking, with stuff to ride over, constantly smashing pedals sucks. And having to coast through rock gardens is slow.

Niner’s ROS9 and ROS9 Plus

Both really swell bikes. I was on a Honzo for a year and the ROS9 feels just like that. I really dig short chainstay 29er hardtails for short hard rides, but over 50 miles bikes like that beat me up. A short back end is great when you’re on top of things, and really harsh when you aren’t.

The ROS9 Plus didn’t feel different than my Krampus, and since that’s the best bike China has ever welded, great. Both are 4130 tubing and have the same geometry. The ROS Plus comes with a thru-axle tapered rigid fork for extra rigidness. I liked that.

I saw some new 29+ tires in the Niner van, and even gave them a squeeze.

They look really good, but since the Niner guys were acting like taking pictures of those tires was worse than selling nuclear launch codes to the KGB, I guess I won’t say anything else. They should be out soon, and they’re Italian.

Why does it matter if someone in the market for chubby tires knows that another option is on the way? I don’t know. The bike industry is weird. They must think they’re developing iPhones, or some other shit that actually matters.

After the demo, Colleen and I hung out for a few more days in town. I rode Ahab again. It’s still one of the best trails ever made.

Then I rode up the Moab Rim Trail, misjudged a ledge move, and nailed my crotch so hard with the stem that my satan sword started to bleed. 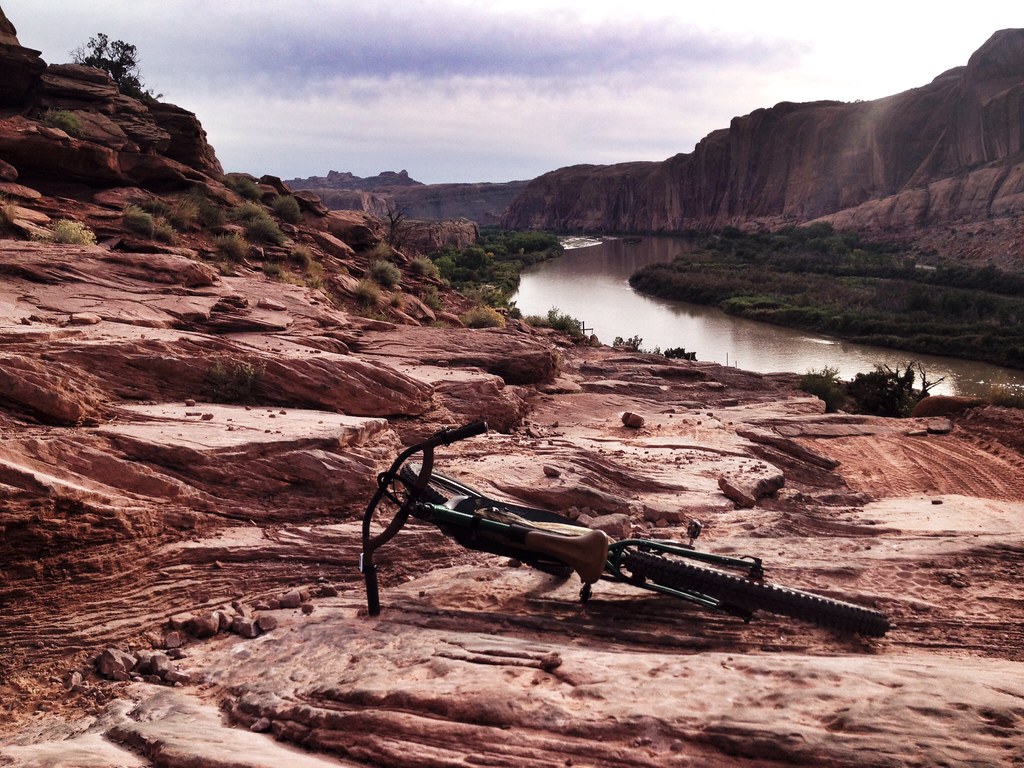 Nothing like a good blunt chunk of metal in the balls to keep a man humble.