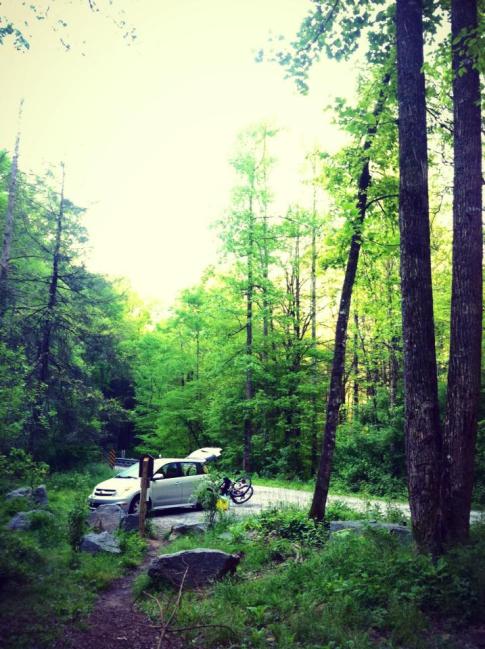 “What am I going to do for five hours?” Colleen says.

I mapped out a good route. I’d climb gravel up Clawhammer Road, take swoopy Buckhorn Trail into rocky and narrow Squirrel Gap. Ride that all the way to Riverside, and burn back on Southmills River. I thought that both of those trails would go fast, because they were next to streams and flat. Then I’d have time to go up and over Black Mountain, and do one of my favorite descents.

It looked like a three hour loop on the map, but I know Pisgah well enough to overestimate. I wave to Colleen and start up the gravel.

About 45 minutes later, I get to the top of Clawhammer, then roll down Buckhorn. At the bottom, I cross a little bridge and climb the smooth switchbacks on Squirrel. My bike feels really heavy. My bike is really heavy. Maybe this fat front actually is a little stupid. But it’s fine. Just ride at a comfortable, steady pace.

The trail seems smoother than it did when I did the stage race a few years ago. At least I can make pretty good time.

I go around a corner, and almost ride into a horse’s ass. I back off to slower than a walking pace, and let the animal and rider get ahead. After a long time, the guy stops the horse at an intersection to let me by. The trails aren’t marked.

“Hey there, is this trail Squirrel Gap?” I ask, and point up the hill.

“Squirrel?” I say, and point again.

He mumbledrawls something else. Guess that’s how they communicate down here. He points to the other trail. Sweet.

I thank him and take the other trail. It gets rougher, and the trail narrows to the width of a pair of my pants, if they were a little crumpled and sitting on the floor. There are a couple of sharp rooty turns. Nothing too sketchy, but I’m being careful. I don’t want to break anything while I’m way out here by myself.

I finish Squirrel, and get onto Riverside. I cross a stream. It’s about 30 feet wide, knee deep, and pretty pleasant. It cools my legs off nicely.

Ride a little farther, then cross the stream again. Then again. And again. Jeez, I wonder how many times I’m going to have to carry my bike across this thing.

Onto South Mills River Trail. I carry my bike across the stream. Ride a hundred yards. Stream again. Another crossing. Waist deep. And another. Belly deep. My legs aren’t even getting warmed up when I pedal now.

Another crossing. Chest deep. Dammit. This is really starting to blow. Through the stream again. I’ve been carrying my bike across this stupid stream for an hour and a half.

“Damn this stupid trail!” I yell. The trail doesn’t seem to mind my damning.

More crossings. And more. And more. At this point I’ve lost count, but I know I’ve carried my bike across more than 20 times. It’s tiring. The river is fast, the rocks really slippy, and my carbon shoes are horrible in fast water over slippy rocks. If I let any part of my wheel, dip into the water, it almost knocks me over.

I let my wheel dip into the water. It immediately knocks me flat on my back.

“Son of a bitch!” I scramble back on my feet, then to the bank. I get to the other bank, and keep moving. I’ve been out for over four hours now. No way I’ll be back in under five.

Five more stream crossings, the last one in white water. I sit down on the other side of the river. This seems like it’s never going to end. I’ve probably gone less than four miles in two hours. I pull out my phone and call Colleen.

“Hey, I’m on this horrible trail. I’ve been carrying my bike through a river for the last two hours. Won’t be back soon, don’t know when I’ll be back,” I say.

I ring the bottom of my shirt out. Water drips onto the sparkly red dirt. Back up. I pedal a half mile without any stream crossings. That’s nice. Then I see the bridge to Buckhorn. Fucking sweet. This trail’s finally over.

Back up Buckhorn, it goes fast. Man, I really want to hike the whole way over Black Mountain, but I shouldn’t make Colleen wait that long. I’ll just descend part of Clawhammer, then do the bottom half of Black.

30ish minutes later, I’m on top of the last descent. A huge owl flies out of the trees. Neat. I’ve never seen one of those guys before.

Down Black Mountain. Off the root drops, around a tight switch back, off another drop, then into the swoopy part of the trail. Up a high banked corner, my eyes are watering, pump some rollers, wind rips past my ears. Then I’m back in the parking lot. Six or seven hours from when I started.

I find Colleen, then jump in the river with some soap. We load up the car and start driving again. We’ll find somewhere free to camp between here and the Florida Keys.